Amongst the panoply of Super Smash Bros. characters, Captain Olimar is often considered one of the most peculiar figures in the game. The Pikmin star is tricky to use effectively, particularly for beginners. Now, he’s developing a new reputation thanks to a ridiculously powerful exploit one player discovered this week.

Before I get into the specifics of Olimar’s newfound exploit, let me lay out some basics so it makes more sense. Like any Smash character, Olimar brings many traits from his own series into Nintendo’s iconic fighting game. Pikmin is an idiosyncratic real-time strategy game (a rare species on consoles!) that centres around controlling one or more astronauts who solve puzzles and kill bad guys by strategically herding and deploying pikmin — the hopelessly adorable denizens of the planet Olimar and co. somehow keep crash-landing on. He “uses” pikmin in a similar way to how characters in other games summon minions: gathering them around him with a whistle, and then picking them up and chucking them at some problem that needs solving — bricks that need to be carried and assembled into a bridge, bad guys that need to be killed, and so forth. Many of his Smash Bros. abilities therefore involve summoning pikmin with a whistle move and then throwing them at opponents.

It’s a unique ability, one that’s difficult for newcomers to Smash to appreciate since chucking tiny allies at an opponent doesn’t work the same way other, more generic kinds of ranged attacks do. Olimar loyalists and experienced players insist that he can be as much of a powerhouse as any other Smash fighter. But still: the guy isn’t a huge presence in tournaments, or even in the Wii U game’s online multiplayer.

How does Olimar’s exploit change this? Well, the technique that was discovered and revealed to the Smash-playing public this week demonstrates how, under certain conditions, Olimar can essential supercharge his pikmin during a fight, turning them into devastatingly powerful super-pikmin that can instantly kill pretty much any opposing fighter with a single hit.

Lest you’re terrified by the thought of unstoppable, overpowered Olimars flooding into Smash’s online multiplayer and taking over tournaments: don’t panic. The move only works under a very specific set of conditions. It requires custom moves to be enabled — settings that aren’t permitted when playing online. While it works in one-v-one matches, it’s only consistently effectively when playing in doubles (a two-v-two mode). The discovery has stirred some anxiety in the Smash community, however, because it’s arrived just when custom moves are starting to be accepted in tournaments. Many fans therefore worry that the exploit will either scare players away from allowing custom moves in tournaments, or that its discovery will lead to similar revelations in the future.

The exploit was discovered by Trevor Williams, a 24-year-old Smash player who lives in Northern California. He published a video earlier this week identifying the move, which he calls “Persistent Pikmin Power Amplification,” or “P3A” for short, and showing how it can be activated:

He also posted an in-depth analysis explaining the ins and outs of the exploit:

And a demonstration of how it works in doubles — turning a Olimar and Fox team into an unstoppable force:

The reason P3A works best in doubles, Williams explained to me in an email, is that Olimar needs to bounce pikmin off another character with a reflector ability to power them up.

Williams broke it down further:

Fox has two options for this. He can either a.) Have Olimar throw Pikmin onto him, reflect, and have Olimar whistle them back with Order Tackle or b.) Reflect the Pikmin as they are running across the ground. Pikmin reflected by either of these methods (latched or walking), are now powered up and capable of instant killing any character in the game. These stat enhancements will carry over to any move that uses that Pikmin , including all aerials, grabs, pummels, smash attacks, and Pikmin throw.

Another Smash player provided step-by-step instructions for how to use P3A in a post on Smashboards:

Step 2. Have player 2 reflect it so the Pikmin touches the reflector by walking by, or latching.

Step 3. Using the Order Tackle custom move, bring the Pikmin back. If they are done at the right timing, you can get almost 100% on your opponent.

Step 4. Note this Pikmin. it is now busted until it dies, is thrown, or used in a smash attack.

Advanced tech discoveries are often met with excitement by the Smash community. But P3A has received a cool reception at best so far. On popular forums like Smashboards, the Smash subreddit, and GameFAQs, fans were in near-unanimous agreement that it’s the sort of exploit that should be banned from tournaments, and patched out of the game entirely by Nintendo. 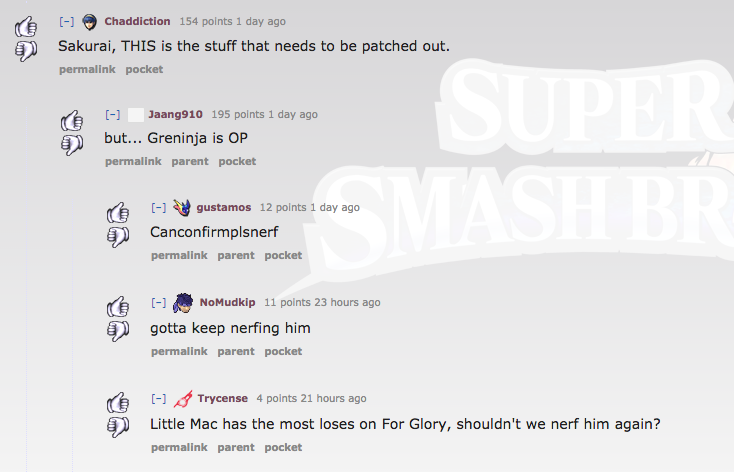 Others worried about what P3A could mean for the nascent potential of custom tournaments:

Or blamed Williams for ruining them at such a critically formative movement: 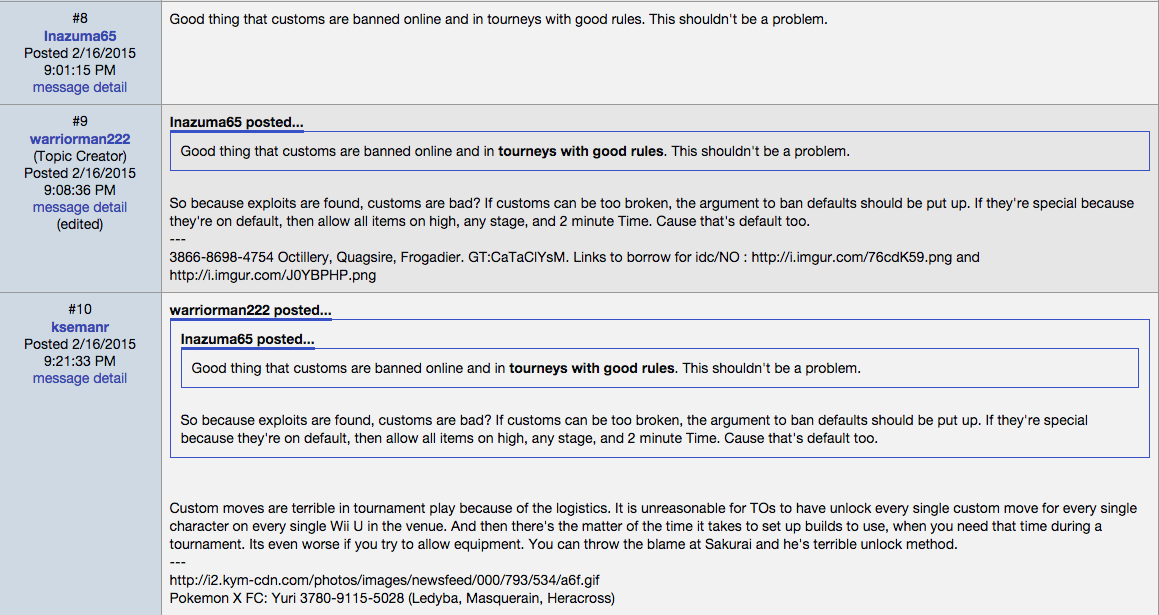 Williams, for his part, agrees with criticisms of the move. He told me that he thinks it shouldn’t be allowed in tournaments, and should probably be removed from the game with a patch. But he stood by making his discovery public, both because he felt it was bound to show up at some point whether or not he was the one who pulled the trigger, and because it’s such a rare find.

“These types of tech findings come along so infrequently, and so far this is the only time I’ve been the first to find something like this!” Williams explained. “It’s exciting seeing everyone’s reactions to the tech , and I had a lot of fun recording and editing the video footage.”

“I thought about saving this for a tournament that runs custom doubles,” he continued, “but I came to the conclusion that this is too strong to be allowed for competitive play in the doubles format. Also, I just thought the concept behind this tech was too good to pass up. I’m pretty sure nothing else in Smash 4 will ever come close to the absurdity of inflicting 999 per cent damage in a single blow!”

“Just because it will eventually get patched doesn’t get rid of the fact it existed (and I hope Nintendo patches this at a later date),” Williams concluded. “If anything, I hope this discovery will allow me to get on stream at the local smash tournaments I participate at more frequently.”