Super Smash Bros. Is Unbalanced, And That's A Good Thing 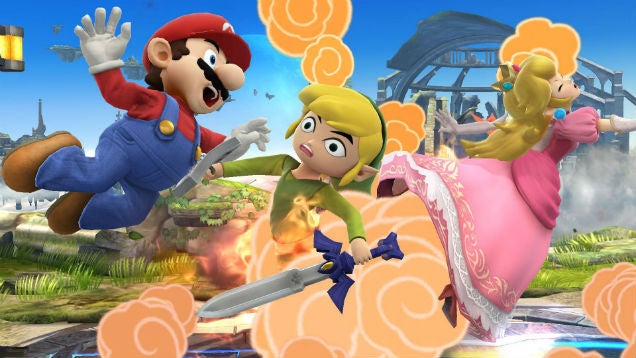 Controversies over Smash Bros. characters like Diddy Kong and Little Mac illustrate a larger concern that people have with Nintendo's famous fighting game: Is it properly balanced? One of the most compelling arguments I've read says no. But then it asks a compelling follow-up: So what?

Forrest Smith, a software engineer at Uber Entertainment and Smash fan, has been picking apart the balance (or lack thereof) in Smash Bros. for months now in a series of highly regarded essays posted on his personal blog. Using data gathered from the SmashWiki, Smith examined the performance of individual Smash characters in competitive tournaments to track how their individual rankings (he calls these "power rankings") and the overall composition of character-based tiers changed over time. He finally completed this ambitious and very cool endeavour last week with a third essay that examines the tiers for Melee and Brawl specifically.

The distinction between power rankings and tiers is a tad confusing, but he finally got around to explaining that in the third essay (emphasis mine):

Tiers are a layer on top of power rankings. A tier is a group of characters that are considered roughly equal in terms of strength. A tier list simply an ordered power ranking list where all characters are also categorized into a tier.

Here are the tier lists Smith pulled together for Melee: 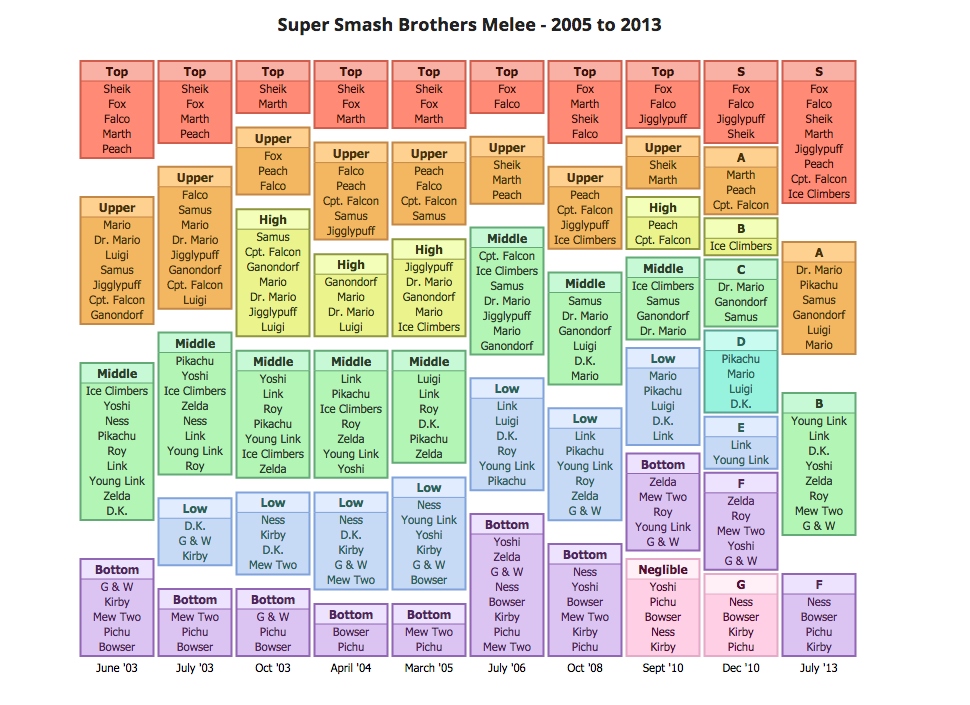 ...and the "power rankings" from the same game: 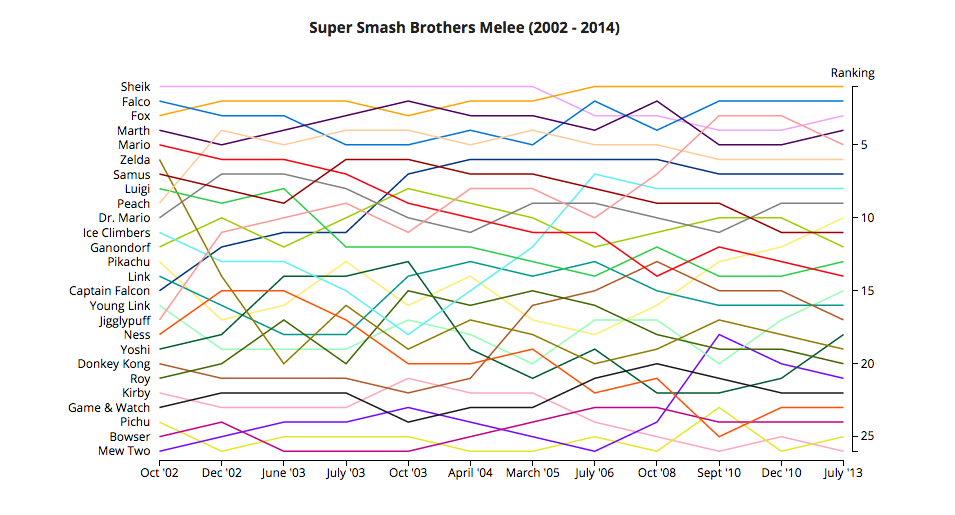 (Note: these are screencaps I took of Smith's graphs. They all have snazzy interactive features that make them easier to view in their original forms on his website, which you should go to anyways since all three essays are well worth your time.)

For evidence of Smash being unbalanced, you need look no further than Smith's charts to see that not all Smash Bros. fighters are created equal. If the game wasperfectly balanced, rankings and tiers based on characters, rather than actual players, wouldn't make as much sense in the first place.

"Tier lists are an objective review of how the game was played," Smith concludes. "They're a reflection of the past!" He likens the competitive Smash community's ranking and categorization of characters to the way that "any professional sports league" measures the standing of relevant athletes. "They're merely a system for rating how well characters have done in tournament play since the last list. They don't define objective truth on game balance nor are they a predictor for the future."

Looking to the future, then, the obvious question is how Smith's analysis applies to the new Super Smash Bros. games for the Wii U and 3DS. Things are slightly different this time around since Nintendo has released updates that specifically address character balance. But Smash creator Masahiro Sakurai also said in an interview last year that he felt he was done balancing his latest game. So if the new Smash has the same lifespan as Melee or Brawl, it will presumably end up producing the same sort of data that Smith was able to use in his work.

Smith doesn't have that data for the new Smash Bros. since the game hasn't even been around for a full year yet. But there's still a crucial takeaway from his work on previous Smash games that's worth mentioning. Because rankings and tier lists aren't set in stone, they change over time. Often dramatically so, in cases where players only start to realise a character's true potential over the course of playing with him or her for months, even years.

In Smith's second essay, for instance, he highlights the "diamonds in the rough" from Super Smash Bros. Brawl — characters that jumped in the competitive rankings from 2008 to 2013: 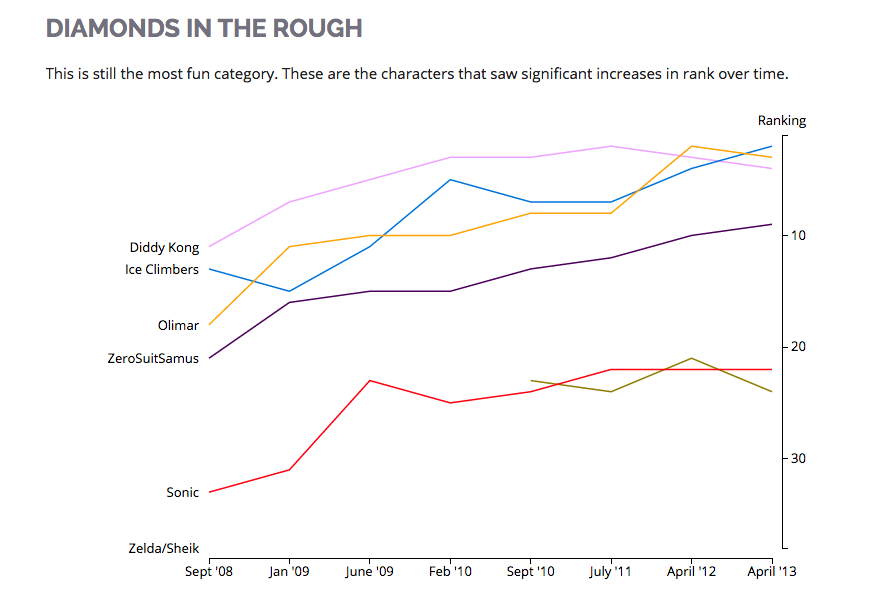 Here's the chart for all Brawl characters, for a point of reference: 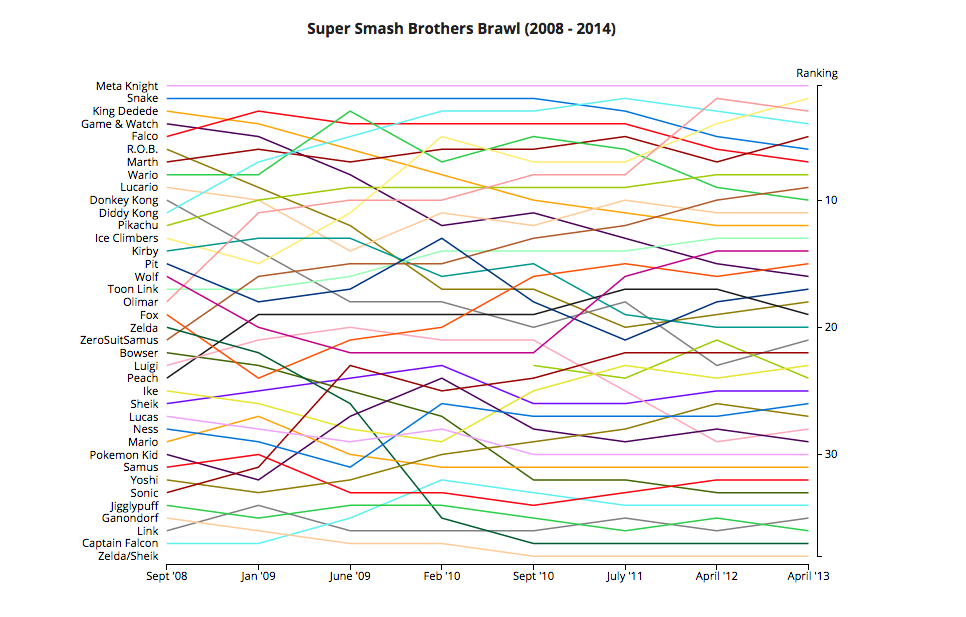 Notice how Diddy Kong started out at a respectable but modest point in the top ten of Brawl's rankings, and ended up in the top five by 2013. Donkey Kong, on the other hand, fell hard and fast over the same time period: 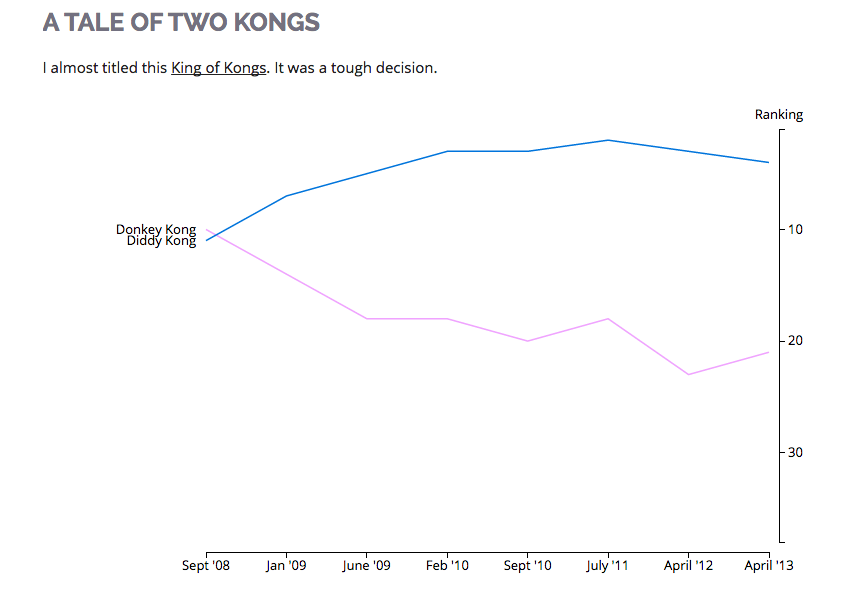 It's important for Smash players to keep this type of historical evolution in mind. While Diddy Kong is the reigning champ in the new Smash Bros. right now, there's really no telling what could happen over the next 5 or 10 years. Who knows: he could end up suffering the same fate as the older Kong did.

Pointing out that rankings and tier lists for a competitive game change over time isn't revolutionary or surprising. So why did Smith go through so much trouble to make a seemingly basic point? It goes back to his original suggestion that Smash is an unbalanced game. In his view, the lack of balance and Nintendo's unwillingness to change or correct that is what makes Smash such a great game. From the first essay, emphasis added:

These discoveries didn't just take a little time. It wasn't days or weeks or even months. It took years to be discovered. In the internet age gamers flip their shit if a given character is considered overpowered or underpowered after a single week. Meanwhile in Smash Brothers it took half a decade for game changing depth to be found in Ice Climbers.

I think a large part of what enables this depth to be found in Smash Brothers is that the game isn't balanced. It's not a small roster of perfectly tuned characters. It's a big game with lots of characters that creates a huge and unexplored problem space. It's up to the players to explore the nooks and crannies and see what treasures they can find. I find that incredibly exciting and compelling.

Players have been exploring "the nooks and crannies" of the new Smash Bros. since it came out — discovering new ways to unleash ever more powerful attacks and even cut down on character lag. But even as some have been doing that, many others have simply bemoaned the game's deficiencies — pointing to issues like Diddy Kong's overwhelming presence at tournaments as a sign of the game's weakness compared to, say, Melee.

Smash has only been out for the Wii U for a few months. I doubt that the game people play 5 years from now will be identical to the one they're playing right now. But if we accept Smith's argument that the perception of balance, rather than balance in and of itself, is what changes over time, then the community's willingness to dive into the new game and search for more diamonds in the rough will determine how great a game the new Smash ends up being.