The Problem With A Nazi Superman 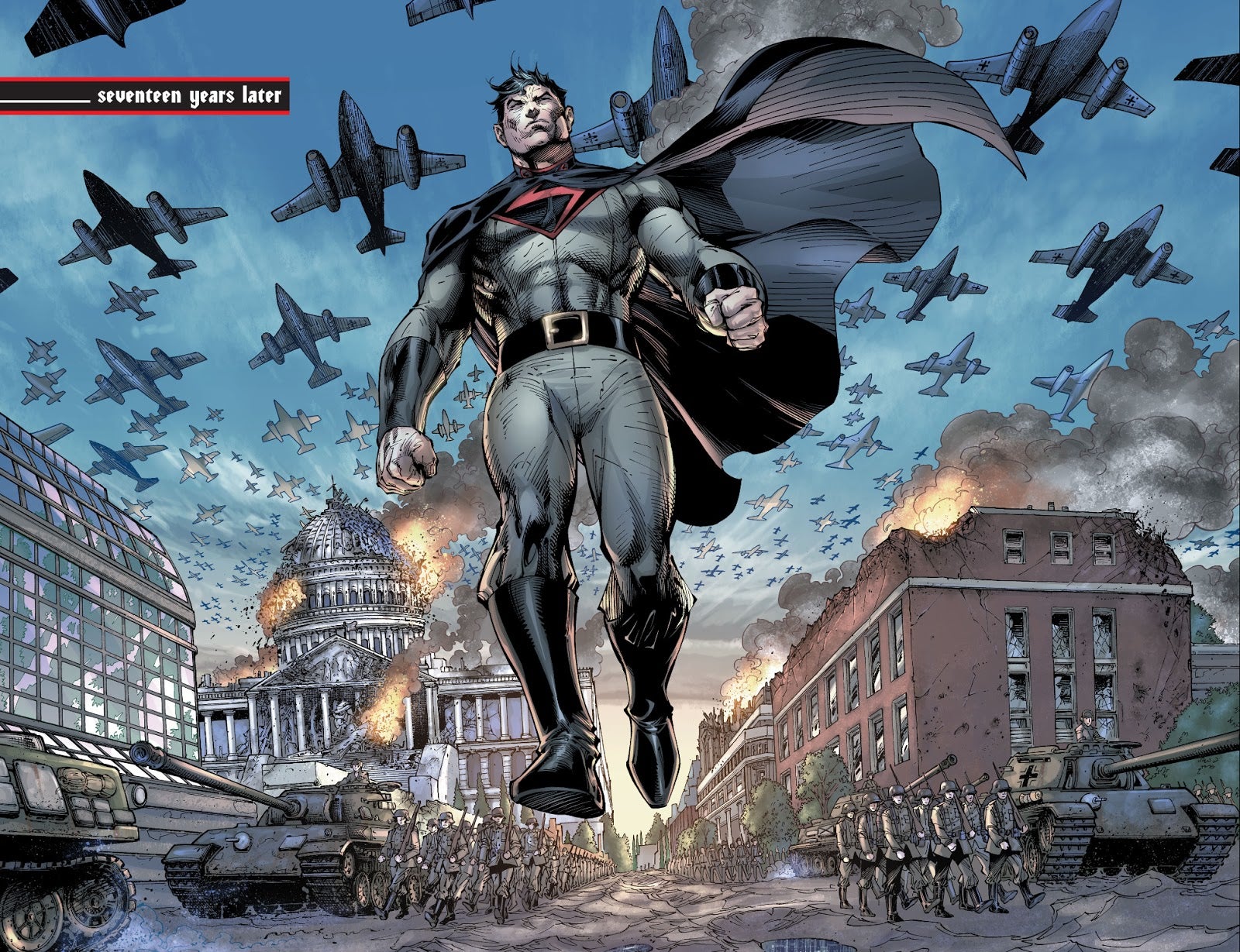 Back in 1941, Captain America punched Hitler on the cover of a comic book. Last week, Superman was working for the Fuhrer in one. Could that possibly end well? 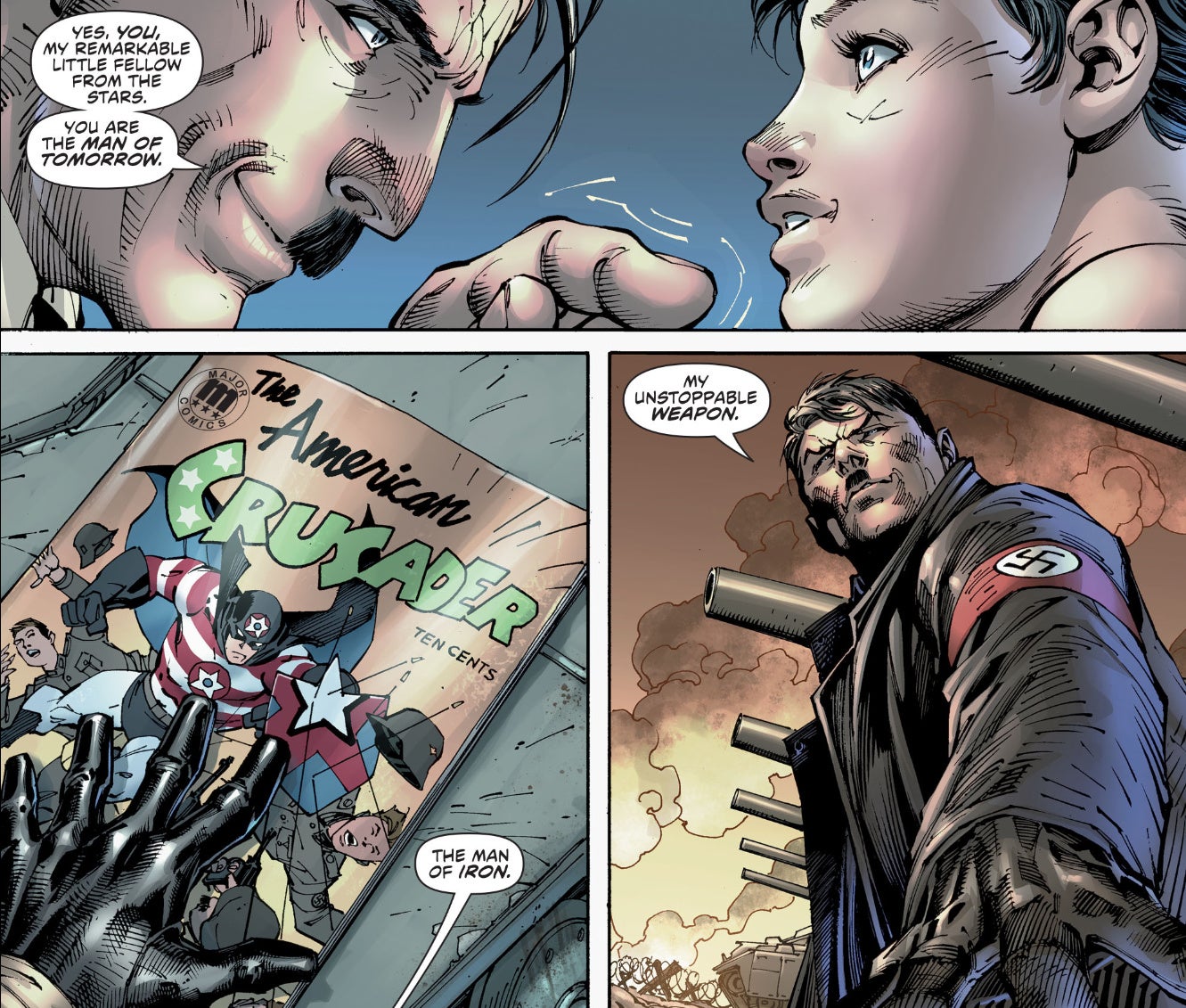 Written by Grant Morrison and pencilled by Jim Lee, The Multiversity: Mastermen #1 is the latest chapter of a multiversal crossover spanning several DC Comics realities. This issue opens up with Adolf Hitler in a bathroom stall with a comic book. His bowel movements get interrupted by news that Nazi scientists have discovered an indestructible baby and rocket. This is the ubermensch that Hitler has been waiting for and the key to world domination.

Mastermen brushes up against the idea of Superman being an almost-religious figure. He wasn't consciously modelled on Moses or Jesus when Jerry Siegel and Joe Shuster created him in the 1930s but his origin story still mirrors the tales of divinely anointed men throughout the ages. He comes from the sky, is reared by plain folk and goes on to thwart injustice with his gifts. But that altruistic behaviour depends on where baby Kal-El's rocket lands. In The Multiversity: Mastermen #1, it touches down in WWII-era Germany. 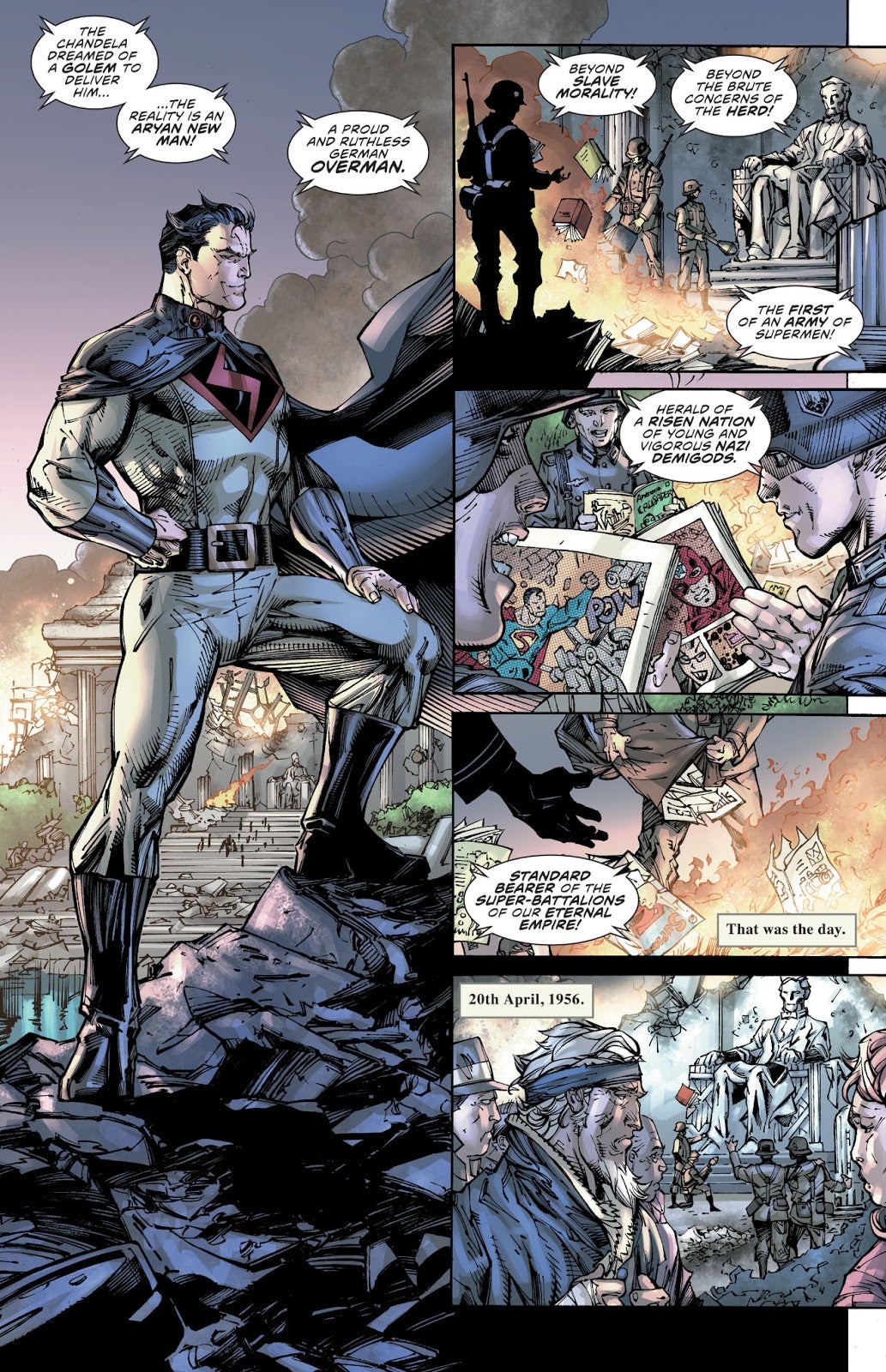 The issue mostly takes place in an alternate present-day, 60 years after the Nazis have taken over the world. The Kryptonian has grown into a costumed figure named Overman. He leads a ruthless version of the Justice League called the New Reichsmen, complete with a sadistic Batman analogue called Leatherwing and a blond Amazon/valkyrie hybrid Brunnhilde. They face a superpowered resistance movement led by Uncle Sam — who's been a DC superhero for decades in the form of the spirit of America — as a challenge to Germania's rule.

Superman stands for power, yes, but he's also a symbol of compassion. Inherent to the Superman myth is the idea that he chooses to embrace humanity and not hover above it. The most interesting thing about Grant Morrison's take on a Nazi Superman is how that part of the character's make-up seems to bubble up despite decades of Third Reich indoctrination.

Overman is plagued by guilt. Even though it's hinted that the worst concentration camp atrocities happened while he was off-planet, the cruel world order in this reality wouldn't have happened without his help. If Superman stood apolitically for mankind's loftiest ideals, then Overman stands for might-makes-right political expedience and the sweeping of painful histories under the rug as long as the "right" people are in charge.

"These enemies rise from the shame of our past," Overman tells the New Reichsmen as they discuss the first attack by Uncle Sam and his rebels. Leatherwing invokes the callous logic heard in post-war Germany: "I'm not ashamed of anything. That happened decades ago, before I was born. My family had good reasons for everything it did." After they capture one of Uncle Sam's Freedom Fighter allies, the Reichsmen torture him to try and get information. None of this sits well with Overman, who can't quite convince himself he's on the side that's right. "That mountain of dead..." he wonders. "What if we deserve this?" In the penultimate exchange between Uncle Sam and Overman, the spirit of America asserts that they will win because they have something to believe in. Like his mainline counterpart, Overman probably never gets tired, but it seems as if the Kryptonite that weakens Overman is guilt. 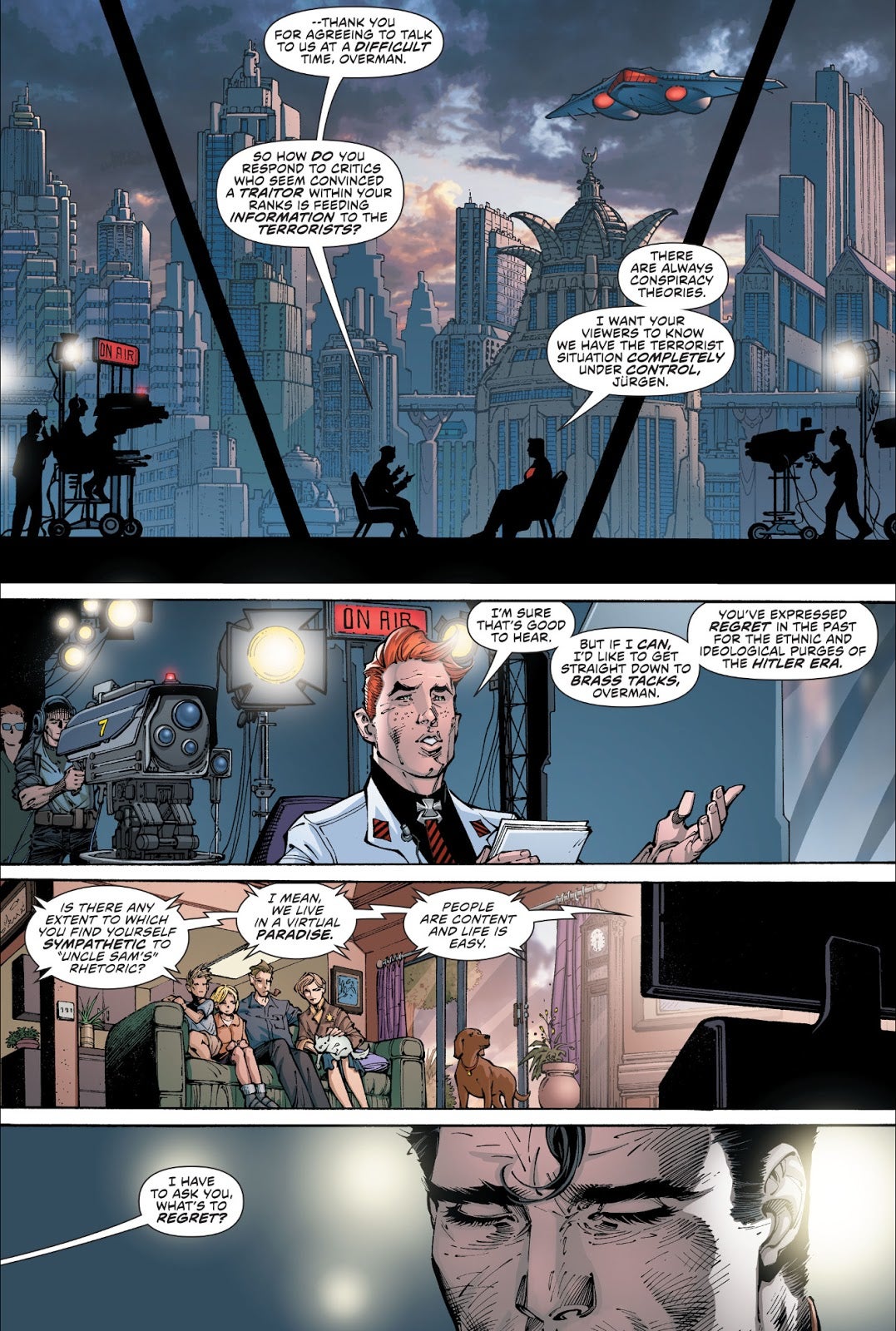 Part of the reason that comic books are so woven into American culture is because they were born during a time when the country was pulling itself out of economic crisis and into a global conflict. We've seen Superman, Batman and Wonder Woman rally readers to the war effort, discredit the Ku Klux Klan and champion equal rights for women. The symbolic power of superhero characters is part of their appeal. We can tell ourselves that the punching and explosions happen for good reasons, to act as ballast for messages about how to make things better for the many instead of the few. They are meant to counter the ideologies that are the opposite of our ideals, not surrender to them. In this comic, Morrison wonders what would happen if our greatest superhero was raised by them, raised by one of those enemy ideologies. Could truth and justice still find a way? Spoiler: No. 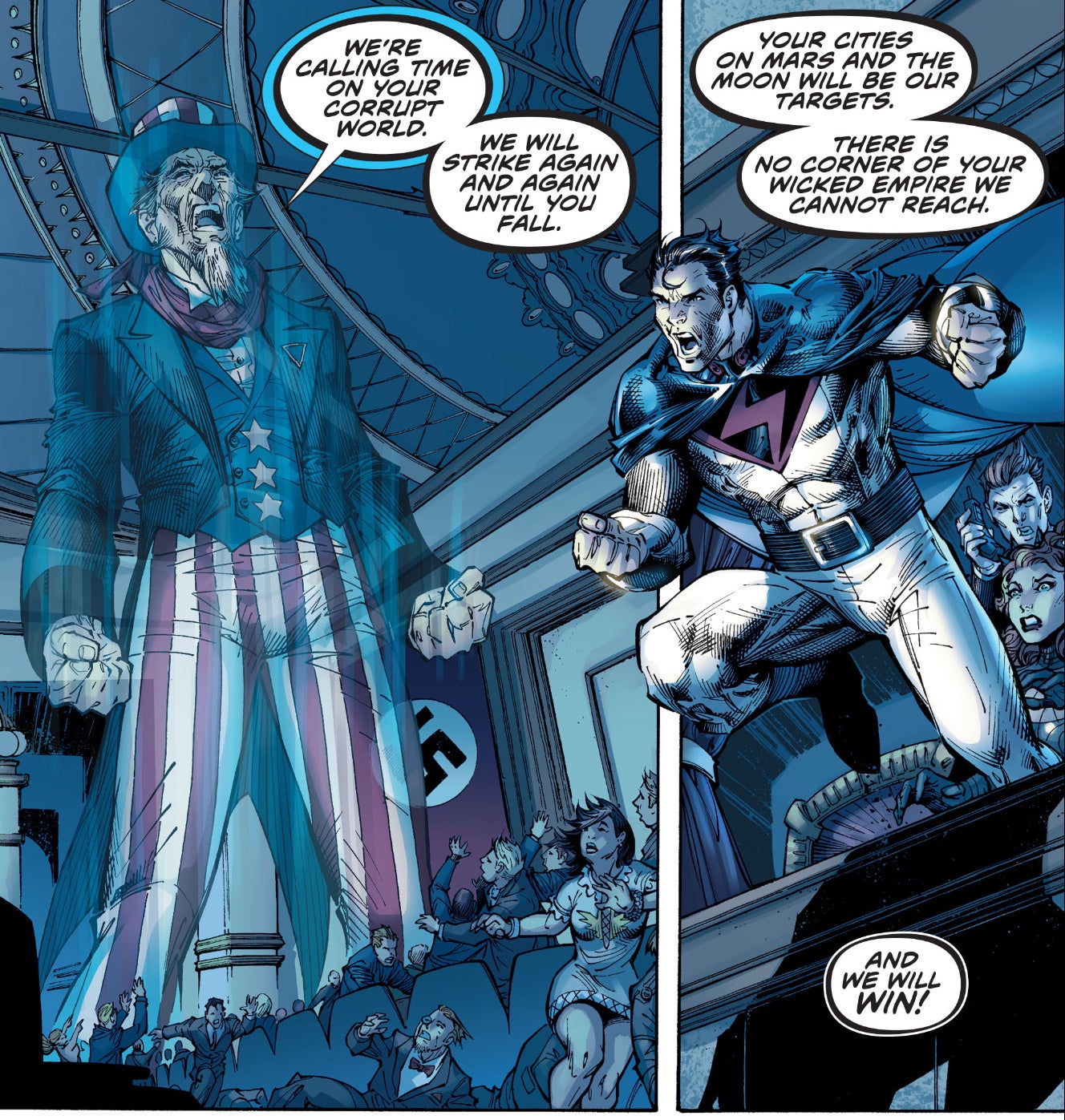 Mastermen isn't not as gleeful as Red Son, a 2003 story where Superman was a Stalinist super-strongman. That interpretation found its fun in character re-inventions and a wonky, time-loop ending. Mastermen is much more dour. The empire Overman rules is built on a toxic foundation and, as the tragic ending of this one-shot suggests, he can't save the world when he's unable to truly represent the best in all of humanity.