On February 14, a YouTube account called PlayMeThrough uploaded a series of videos titled “The Order: 1886 Gameplay Walkthrough.” The title was rather literal — the videos, which were separated into 16 parts, walked viewers through the entirety of The Order: 1886, from prologue to final boss.

Given that The Order: 1886, a highly-anticipated PS4 game, doesn’t come out until Friday, this immediately kicked off a number of furious discussions. The loudest and most inane of these discussions involved the game’s length, which clocked at around five hours according to the video leak. Gamers desperate for as much information as possible about The Order fretted that the game was too short while the developers frantically tried, and failed, to control their message.

It’s funny. As often happens during those strange weeks before a game comes out, we’re in a bit of a stasis period, where reviewers are currently playing The Order: 1886 but can’t actually talk about it until the publisher-dictated review embargo is up on Thursday. So as the headlines came fast and spurious — “Report: The Order: 1886 is five hours long?” — no outlet could give an answer the question people really want to know: is this game worth playing? Is it worth our time? (Check Kotaku on Thursday for our answer to that question.)

Game leaks are common, so common that it’s not even that surprising that someone was playing the game a week before release. Early bootlegs of many major games wind up on the web thanks to torrents, review copies going astray, and rogue leakers at various companies. What’s unusual is the convergence of this latest game leak and the culture of Let’s Play videos. Five years ago, it’d be barely imaginable that you’d be able to watch a full playthrough of any video game online; today it’s just unusual that you could watch one this early. Many publishers have tolerated post-release playthroughs because they see those videos as good marketing or because they choose not to enforce copyright claims. YouTube is full of playthroughs even from other Sony games, like Infamous: Second Son.

One early leak has changed the entire narrative of this game. Days before it’s out, gamers across the world are talking about how long it might be, how many quick-time events it has, and how it apparently reuses boss battles in embarrassing fashion. The world won’t play the game until Friday, and reviewers can’t contextualize any of these conversations until Thursday, so the game’s narrative currently revolves around the footage and opinions of a single YouTube leaker.

Floating around the front of r/games yesterday, for example, was this thread about the playthrough, offering firsthand details that nobody else has to offer. “Took me a little over 5 hours on my first playthrough,” wrote the person behind PlayMeThrough. “Not much replayability. You can’t level up any skills or anything and there is no New Game+.” As expected, the reactions were harsh. Said one Redditor: “This caused me to cancel my preorder. I’d still very much like the play the game but I’ll rent or wait until it’s $US20.”

Over on GAF there’s an Order: 1886 thread with several hundred posts worth of discussion — not over the characters, or the gameplay, or any of the other game aspects that Sony is pushing so hard on people, but over the fact that PlayMeThrough’s playthrough took five hours.

What’s more, because this specifically is a video game that was primarily marketed based on looks rather than, say, innovative gameplay, it’s far more difficult to justify stepping back and wondering just how different the experience is when you play it rather than watch it on YouTube. So the reactions are even more polarised. 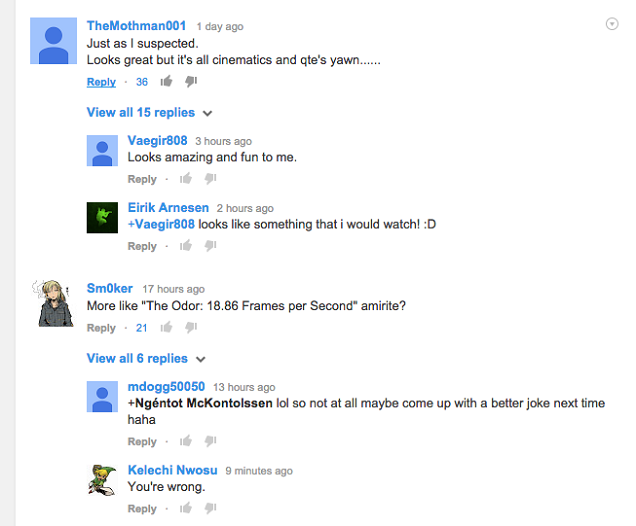 It’s not quite clear just how The Order: 1886 escaped its release cage so early. At some point in the past 24 hour, the developers at Ready At Dawn filed a takedown notice and got all the videos removed, and the YouTube account has been suspended, but we don’t know whether this was a pirated copy or just a rogue video-maker breaking embargo. (Our reviewer, Kirk Hamilton, got his copy of the game last Friday.) It does suck for the folks behind the game, as many have noted. 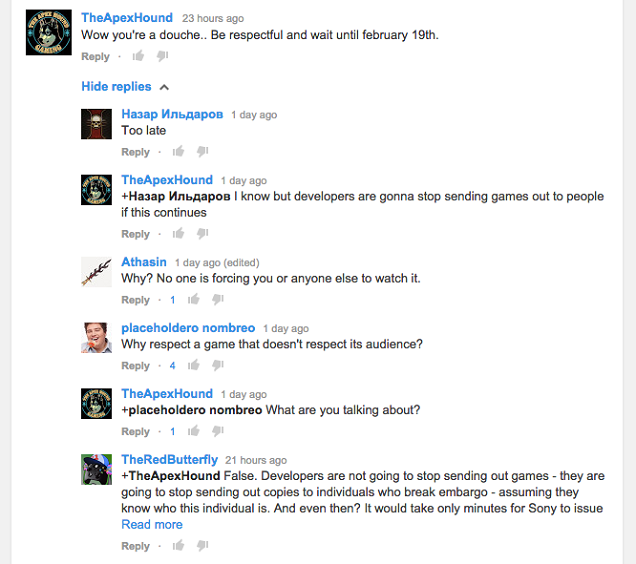 What we do know is that this one set of videos has dominated the pre-release coverage of The Order: 1886, and that all anyone can do is sit back and watch as we wait to see whether this game will be worth all the attention.