Video games are pretty s: there’s a TV, a handheld controller and some buttons, right? Not at the Game Developer Conference’s Alt.Ctrl gallery. It’s a hand-made arcade filled with bizarre, custom game controllers that defy convention. It’s also the most fun I’ve had on a trade-show expo floor in years.

Have you ever thought the awkward moment when you try to fist-bump someone who’s trying to high-five you might make an awesome game mechanic? Never? Then you’re one step closer to sanity than Nick Kornek and Louis Sciannamblo — the duo behind Spacebro Justice Rocket. Spacebro is a game about two intergalactic best-friends who are also space that fight crime with the power of high-fives and friendship. It might be the best co-op game ever made.

Playing it is pretty easy: grab a friend, pull on a High-5000 game controller (read: a fuzzy blue glove outfitted with impact sensors), follow the on screen prompts and, uh… high five and fist-bump your way to victory? It’s truly bizarre, but totally fun.

Some game controllers have twelve buttons. This one has twelve sides. The DodecaLEDron is a Dodecahedron peppered with distance sensors. Wave your hand over it and watch stuff happen. I used it to pilot a spaceship — the bottom five sensors controlled steering, the middle five aimed and fired cannons and the top sensor recharged the ship. I crashed into an asteroid and met a bitter end at the hands of space pirates. I do not recommend the DOdecaLEDron to NASA.

When I see an retro-style radio box, I think about 1940’s big-band music. When alternative game designers see an old box radio, they see Zeppelin controls. Go figure. This old radio houses an Arduino, a bunch of servos, some potentiometers and a Android tablet. I used it to fly a Zeppelin on Venus by twisting knobs, flipping switches and changing AM radio stations. It was surprisingly fitting. I’m going to have to re-think how I think about old radios.

If you love acronyms, rotary phones and missiles, then boy howdy, do I have the game for you. Airborne Fleet Tracking and Enemy Radiation Geiger to Level Our World (or A.F.T.E.R.G.L.O.W. for short) is a bizarre game with a weird narrative about a Russian who created the ultimate missile defence system just in time for it to fail to save him from destruction. Seriously, check out the game’s trailer:

I’m still trying to decide if that impersonation is offensive, or just terrible. The game itself is pretty great though — peer down that tube and you’ll see a LED radar system. Dialling one on the rotary scans for enemy aircraft, and dialling any other number fires imaginary missiles at those bogeys. It’s a little genius — the antiquated phone dial imposes a physical limitation on how fast you can fire missiles, and it can get pretty tense.

OK, maybe there’s a few traditional gaming controllers here, but you don’t use them to control the game — controlling them is the game. Deluxe Turbo Racing 360 gave me direct control over a purple Xbox 360 controller’s rumble motors. My mission? Vibrate that thing across the table in a race of unpredictable force-feedback manipulation. I won, of course.

Most kitchen playsets are powered by imagination/ — but not Robo Mama’s Cooking Kitchen. It’s an LED-covered mess of sensors, capacitive sponges and pink plastic. Not sure what to cook? Don’t worry, it tells you. Every time the game starts, a row of blinking LED creates a random recipe. Fill the touch-sensor pan with water, add plastic vegetables and wait for it to judge score you on your meal. It’s not all that fun, but I was kind of mesmerised by the digital faucet: if you leave it on long enough, the LEDs on the spigot turn red. Hot LED water. Huh.

Man “What Hath God Wrought” is a really /heavy/ name for a morse code simulator. I don’t have a lot to say about this one. It has you tap out dashes and dots using an antique telegraph key. It’s neat and retro and everything I love but man, that name worries me.

Playing Snail Run has convinced me that life as a snail is pretty much the worst thing ever. The game’s controller is a glove that detects finger movement — curling your fingers moves you forward a little, balling them into a first retracts you into your shell. Tapping them in just the right way helps you turn. It’s hard to control, but it almost seems intentional. Your protagonist snail is just trying to survive, but he lets out a creepy, depressed groan with every slimy inch he moves. His life seems awful. I steered him off the kitchen counter to his inevitable doom. #noregrets

OK, have you ever heard of WarioWare? That Nintendo mini-game series that asks you to weird, rapid-fire and sometimes gross things? That’s what HOMIES is, except you have to wear a big mask while you do it. Wearing an owl mask? Tilt your head back and howl at the moon. An monster mask? Quick: pick your nose, tweak your ears and poke your eyes out.. now pick your nose again. This game made me feel a little uncomfortable, but at least I know how I look in a wolf mask now.

“Unscrew heart” is easily one of the weirdest instructions I’ve ever received from a video game, but that’s how Hexed Heart starts out. It’s pretty literal: the controller is a box with six bolts screwed into it. One is driven straight into a cute little pink heart. You turn it counter-clockwise to start the game, and then clockwise again to curse yourself. No, I don’t know why you’d o this. I only know the curse is going to get me if I don’t turn all these bolts in just the right order to match the creepy voodoo man approaching the front of the computer screen! Stop bothering me, I’m trying to save my soul!

If you touch just the right places on this MaKey MaKey-equipped magical tome, you can reign fire down upon tree-demons, call down lightning on your foes and conjure water to douse wreaks fire-nymphs. It’s easy (and awesome) — simply charge the spell book by placing your palm on the page and tracing the runes. Don’t look too closely, though: or you might learn that your spell book started life out as a history on european churches.

This is probably the world’s only one-dimensional dungeon crawler. It’s just a long string of LEDs that change colours to represent, enemies, lava and conveyer belts. You’re the strip’s hero — a lone, green LED. Get to the other end of the string of lights.

It’s gleefully simple and addictively fun. A single joystick controls everything — leaning it in one direction or another moves you, jiggling it with vigour lets you attack. That’s about it. For a game with no graphics to speak of and only the most basic sound, Line Wobbler is a surprisingly excellent example of minimalist game design done right.

Remember those weird halloween fun-houses as a kid where someone’s dad would put cold spaghetti in a dark box and tell you it was brains? That’s what Ferdinand Laborite is — a bunch of weird, spongy feeling nonsense in a wooden box trying to convince you its someone’s brain. It’s shaped like a guy’s head (Ferdinand, to be specific, the game’s protagonist) and whatever is inside of it feels super weird and squishy. Plus, it’s been touched by like, a million grubby trade-show attendees. That’s the stuff nightmares are made of.

OK, maybe this is the best cooperative game ever made. Keep Talking and Nobody Explodes is a great experiment in isolated, cooperative gameplay. One guy stares down a series of armed bombs while wearing an Oculus Rift while his friend tires to walk him through disarming it by reading the manual to him. It’s deliciously chaotic.

“How many wires are there? No don’t cut that one! What do you mean the clock is speeding up?” Don’t worry, I talk a lot. Nobody exploded.

If pong had dozens of buttons, three sides and three players, it would be Tripad. 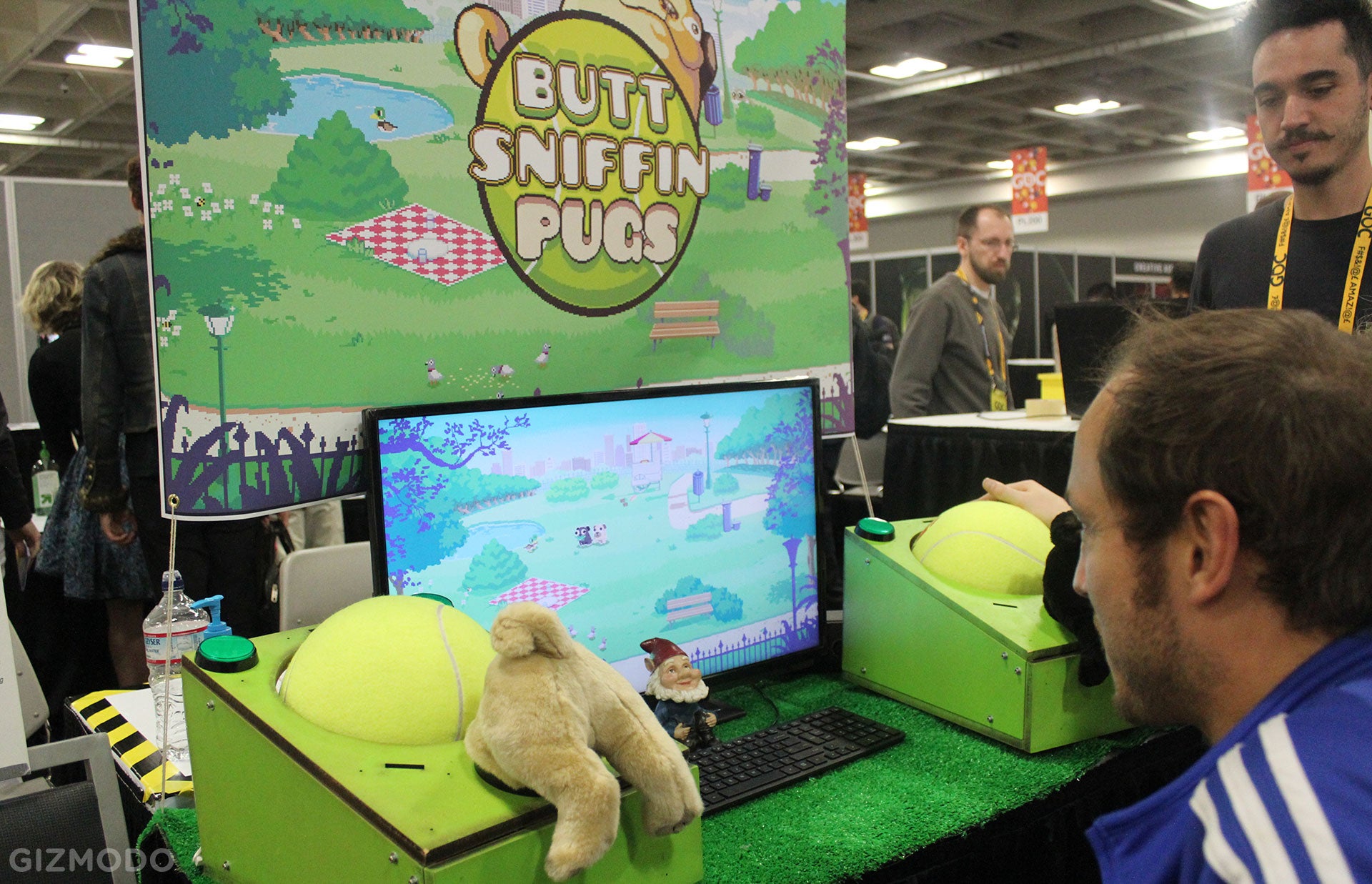 This… this is a game where you roll a giant tennis ball around to, as the developer puts it, “run like a dog and sniff butts.” The tennis ball part is actually fine — it kind of forces you to move your arms in a trotting motion that mimics how the stubby-legged K9 walk, but I don’t know how I feel about grabbing a plush dog bum to sniff a virtual dog’s rear in a video game.

What happens when you successfully sniff a dog butt? The game lets you defecate and urinate anywhere in the park you want. Is this what we’ve come to as a species? Doggie defecation and anus-sniffing simulation? OK, GDC. I’m done. We’re done here.