Crunchyroll’s Onyx Equinox Is a Mythic Tale Forged in Fire and...

One Small Thing I Love About Heroes Of The Storm

I recently added Heroes of the Storm to the growing pile of MOBAs that I’ve become hopelessly addicted to. And while I find the characters in Blizzard’s new game lacking in some ways (like their skins), one thing really impresses me about it in comparison to League of Legends: the way the heroes talk to one another.

Banter is a standard feature of MOBAs like Heroes of the Storm, League of Legends, and Dota 2, but it works a little differently in Blizzard’s game than others. This is partly thanks to the lore underpinning Heroes. The game pulls in characters from established Blizzard franchises like Diablo, Warcraft, and StarCraft, so many of the champions have pre-existing relationships that their banter hearkens back to. One notable example: Tyrande Whisperwind and Illidan Stormrage have a tenuous romantic past from their days together in World of Warcraft. When the two of them meet in battle in Heroes, then, they might say something like this:

Tyrande: Setting you free was my biggest mistake.

Illidan: And loving you is mine.

It's a little nod to the World of Warcraft fans playing Heroes. One that, to paraphrase some fans gushing over the game in a recent Reddit thread, stacks up all the feelings: 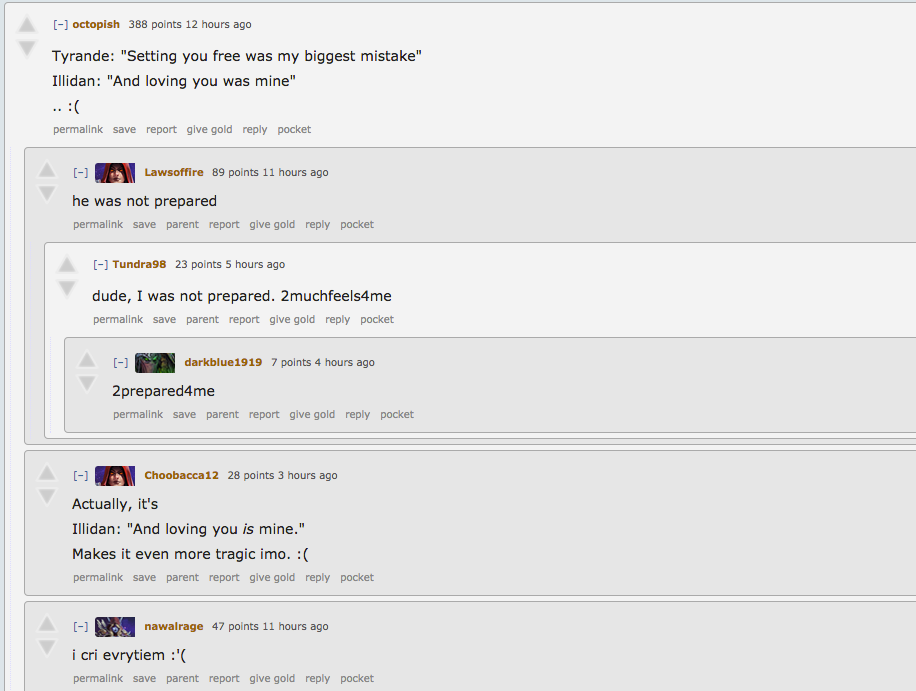 There are a bunch of other great examples like the fleeting lines that Tyrande and Illidan exchange. StarCraft's Terran protagonists Tychus Findlay and Jim Raynor jab at each other with lines like, "How many times do I have to kick your arse, Tychus?" Sonya, Heroes' play on the barbarian class from Diablo III, might say something like, "It's good to fight with you, Angel," when she's on a team with Diablo's Tyrael -- to which he responds, in true Tyrael form: "The honour is mine."

League of Legends has some great snippets of dialogue like these. But given how massive its character pool is and how distended its lore has become, entertaining moments of banter have been few and far between in my experience with the game so far. Also, regardless of how good or bad the lore for a game like League or Dota 2 is, they will never have the same fan fiction appeal that Heroes does simply because they weren't made by cobbling together bits and pieces of well-known stories and worlds.

These are just the fan service-y moments in Heroes of the Storm, though. My favourite example of the game's great banter is a much more functional one in comparison. Oftentimes when you're nearby a teammate in a game, the ally champion will encourage you to go find a healing station if you're precariously low on health. When you play Heroes as a support character, it takes things a step further by having the teammate your supporting actually thank you for your hard work.

One of my favourite champions to play as in Heroes, for instance, is a World of Warcraft character known as Li Li. She's an adorable, spunky little panda who sort of reminds me of Dora the Explorer. Like most support characters, she's very weak when it comes to actually fighting. Her most powerful assets are here healing abilities then. She's at her best when you following a step behind a teammate, chucking health potions at them every few seconds. She also has an incredibly effective ultimate power that heals any teammate in her immediate vicinity. In practice, this turns her into a giant walking umbrella -- letting you cast a wide net to keep your entire team alive during a frantic fight against most or all of your opponents.

Li Li can be a very useful asset to have on any team, in other words. Like many similar healer or support characters, however, she doesn't win her player that much glory. She assists her teammates innumerable times during a fight, but won't end up with many kills to her name at the end of the game.

Heroes makes playing as Li Li feel much more rewarding than it could be by having the characters you're supporting shout out things like, "I'm loving these heals!" at regular intervals. Other players on your team could say stuff like this too, I guess. But the action in Heroes (like any MOBA) unfolds at such a rapid clip that it's often hard just to keep up with it, let alone dish out compliments every few seconds. Far more often, conversation between players is reserved for criticism of what people should be doing better. And not all of that criticism is especially...erm, constructive.

Having Heroes characters, rather than just the players, thank you for your contributions, is a great way for Blizzard to make the game itself step in a pat you on the back for doing a good job. As one player put it in that same Reddit thread, hearing an ally tell you you're a great healer is a nice way to make you feel "like you are a well-appreciated member of the team." 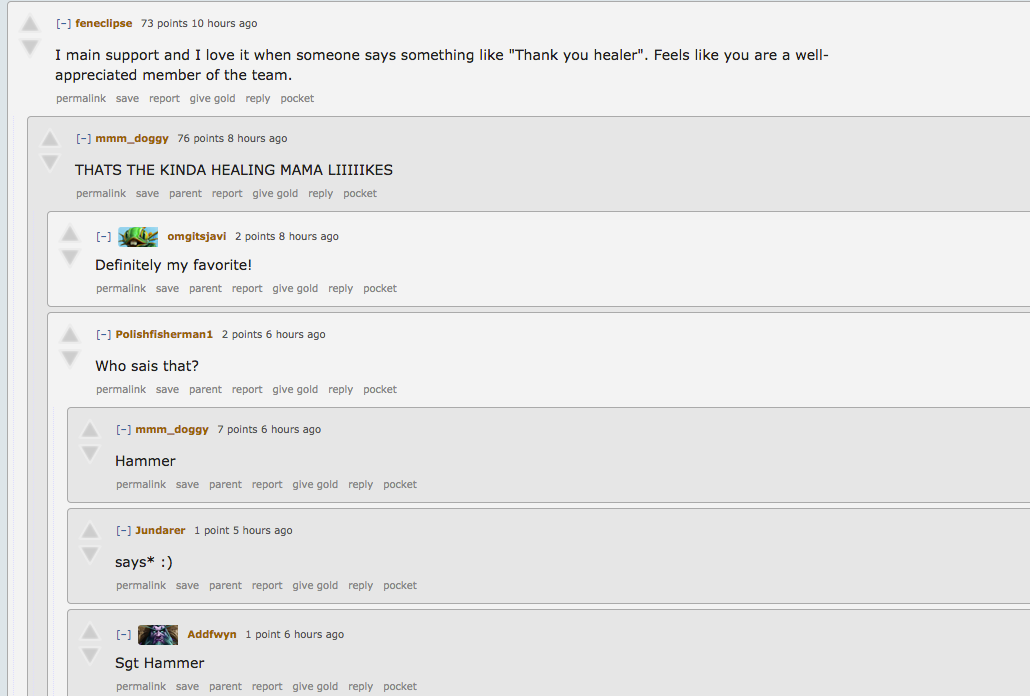 Besides just being a great little detail that Blizzard graciously and thoughtfully put into Heroes of the Storm, it's worth considering the merits of features like the "Thank you for healing me" banter when it comes to another ubiquitous element of MOBAs: toxicity. As they spoke about earlier this month, Blizzard has already begun experimenting with different ways to curb toxicity in Heroes. Adding in more warm and fuzzy features like kind-hearted in-game banter could be a great (and relatively painless) way to do just that.