It doesn’t matter if it’s 1980 on the silver screen or on the cluttered desk of a guy who critiques toys, if you’re Luke and you’re wearing Hoth gear you need to watch out for Wampas.

Commander Luke Skywalker in Hoth Gear is the latest figure in Sideshow Collectibles‘ sixth scale Star Wars line, and with his Tauntaun sold separately one has to assume that this version of Hoth Luke is either safe in the Rebel base or dying in the cold of a Wampa attack. As the unit I am reviewing is the “Exclusive” version of the figure, which comes with a special Wampa-battered face… 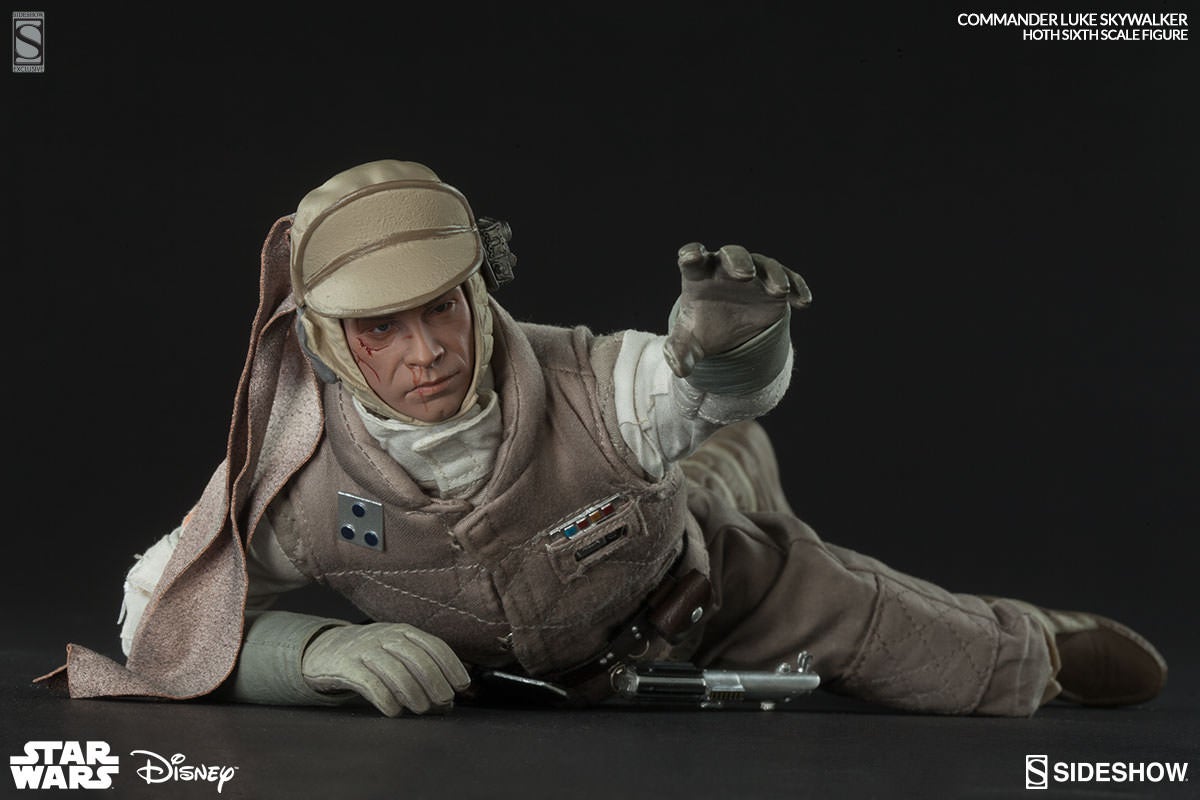 …the latter seems to be the case.

Lacking a realistic Wampa figure to use in the photo shoot for this review, I made due with what was on hand. The results are pretty damn cute.

I’ve been told the exclusive version of Commander Skywalker in Hoth gear is wait-listed, so technically I’m reviewing the $US199.99 standard edition, which comes with one less head. Is that just a flimsy excuse to cover for the fact that I didn’t take any photos of the bruised head? Don’t be ridiculous. Maybe a little.

So what we have here is a 30.48cm tall recreation of Luke Skywalker at his best, and by best I mean the time he got beat up by a snowman. I remember watching this scene as a young boy and actively fearing for Luke’s life. I was a stupid child. 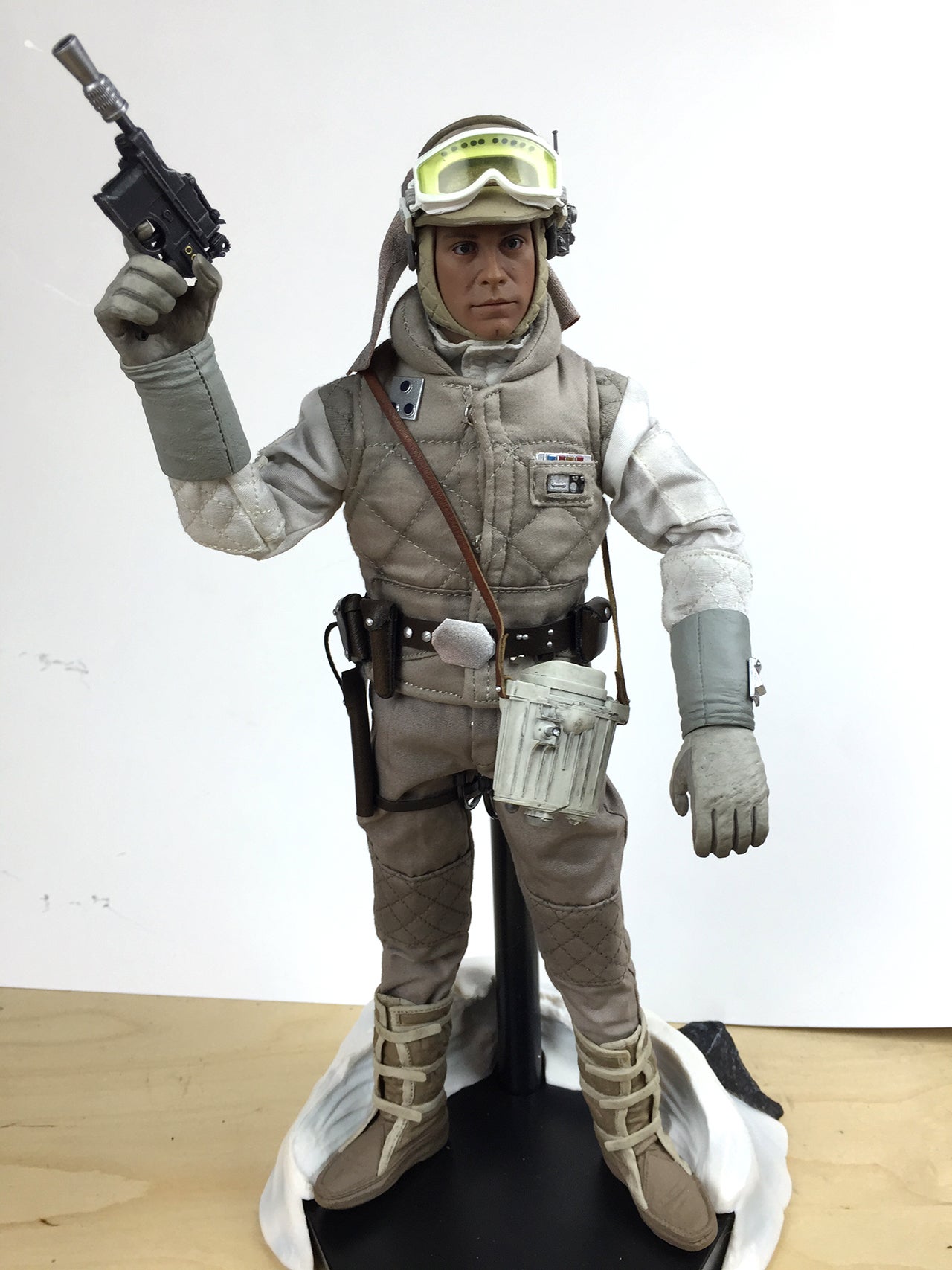 Decked out in his multi-layer snow clothes with two-part boots and Sideshow’s sixth-scale series’ trademark ridiculously tiny stitching, Commander Skywalker also comes with a plethora of accessories to assist in play and display.

Packed inside Luke’s double fold-out box is the following. 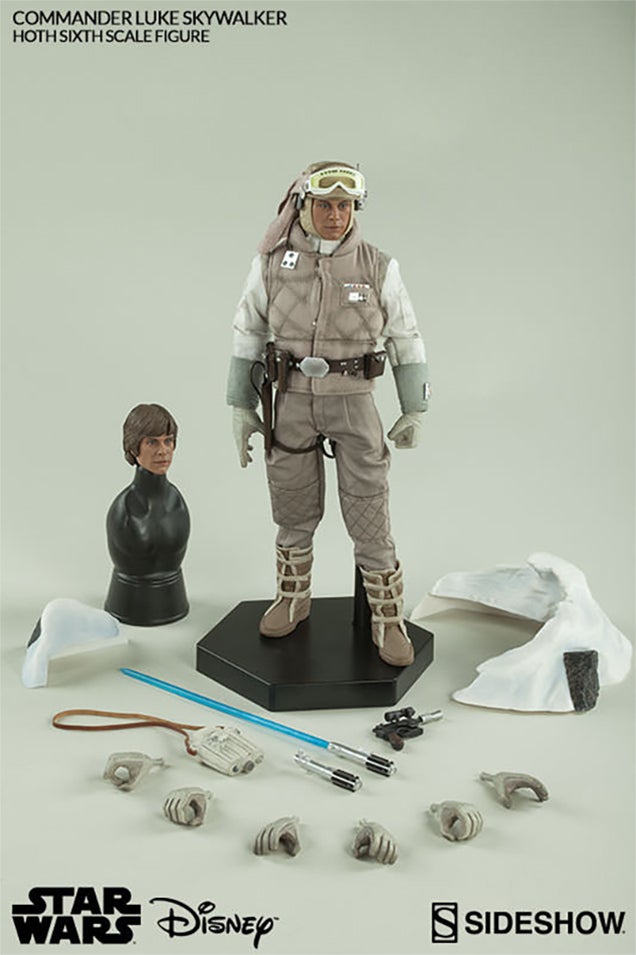 What Did I Lose?

Why you gotta assume I lost something? I am very careful with every figure that crosses my desk. Man, look how pretty they have made Hamill for this piece. 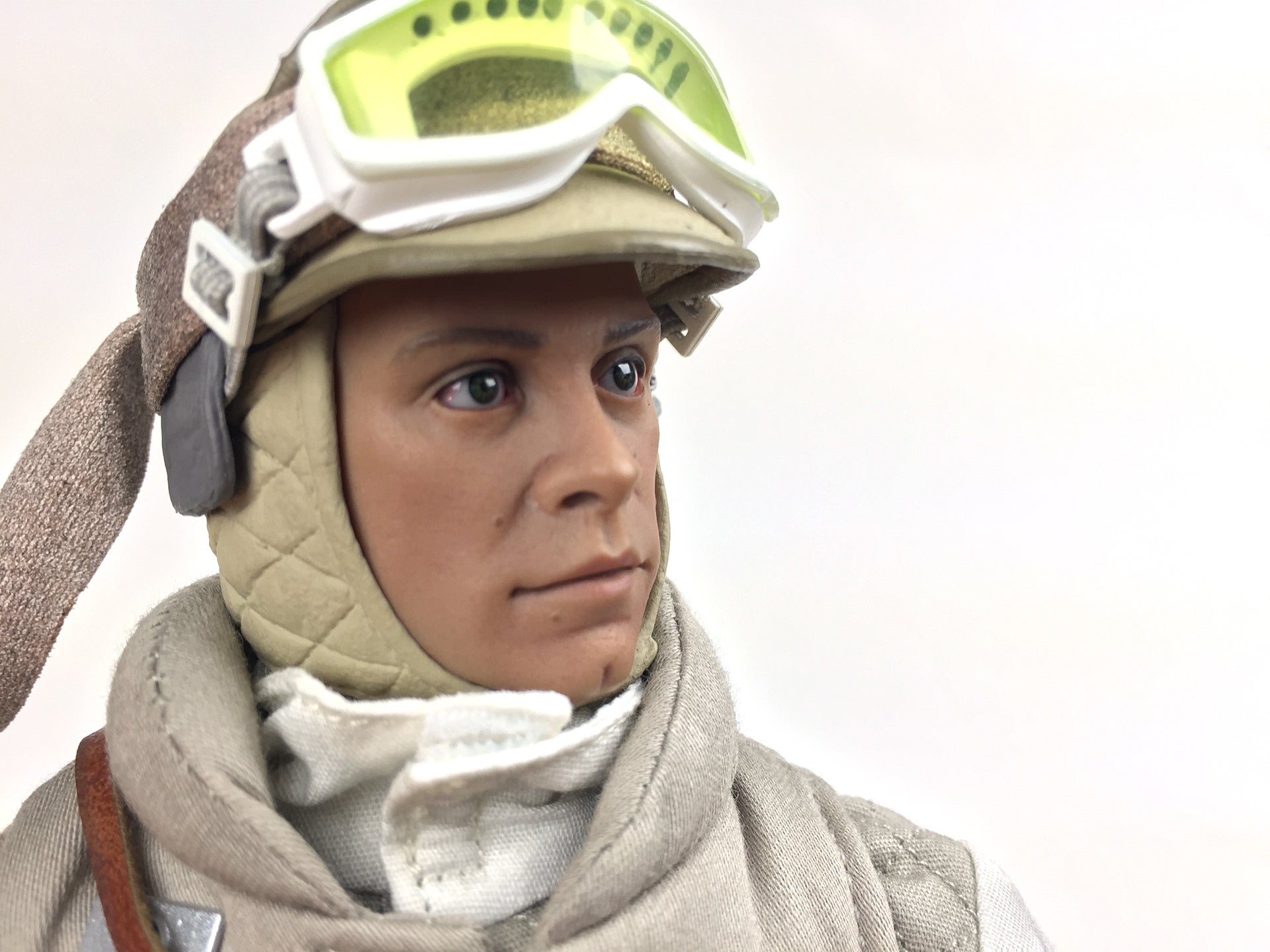 No Really, What Did I Lose?

OK fine, I lost the hilt-only lightsabre. I’m sure it’s around here somewhere. Probably just rolled off my desk or something. Sorry.

It’s my favourite Luke. After prancing around in his beige tunic for most of A New Hope, changing briefly into more heroic attire for the Wookie medal-denial ceremony, Hoth Luke was the first version of the character that felt like a true hero, and not just some guy in over his head. 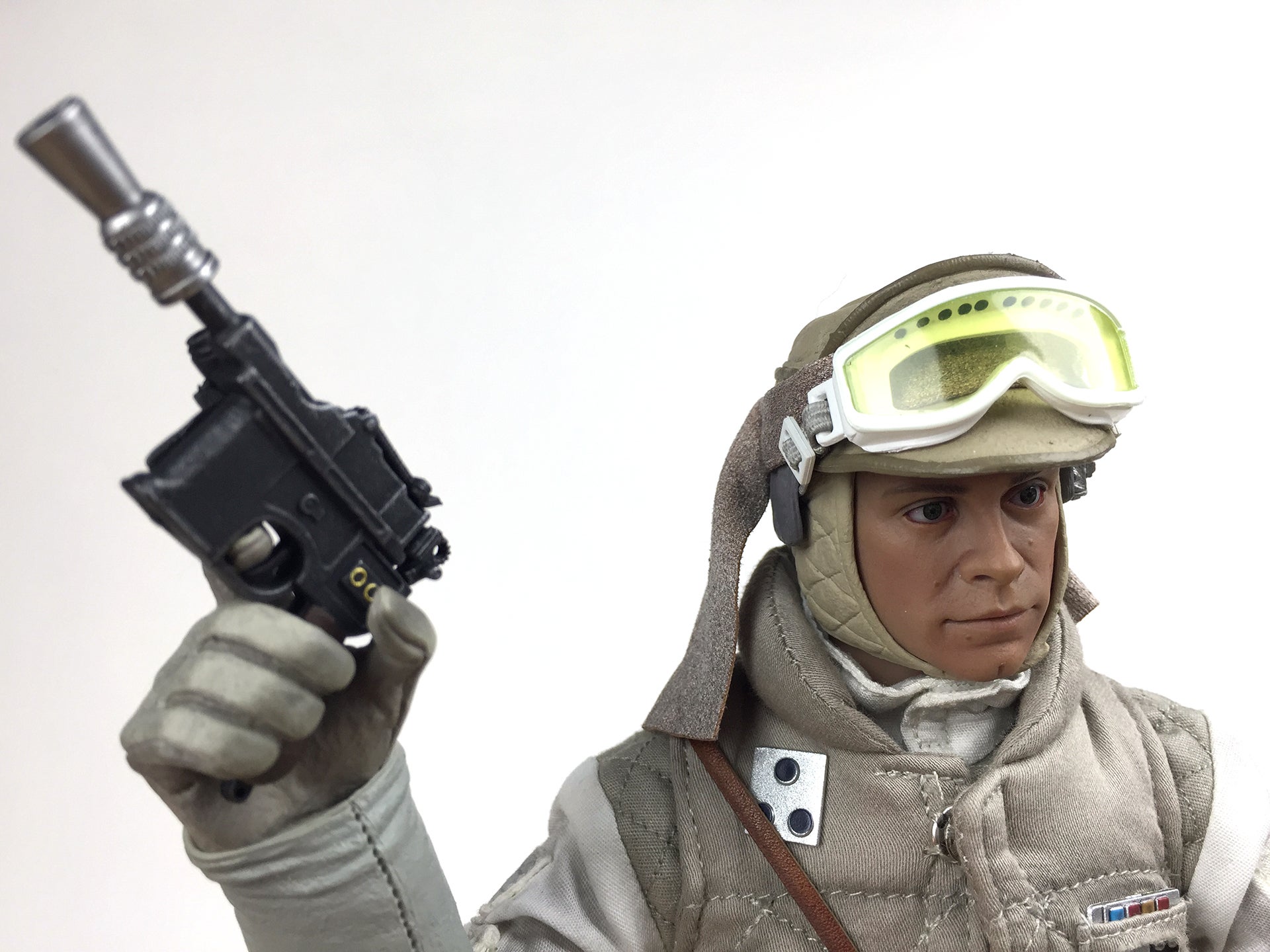 He’s calm, cool and collected without being pretentious about it, as he was in his Return of the Jedi blacks.

I guess he really was this fresh-faced. Realistically-sculpted Luke Skywalker faces often throw me for a loop. After decades of following Mark Hamill the voice actor, I guess I’ve gotten used to older features. 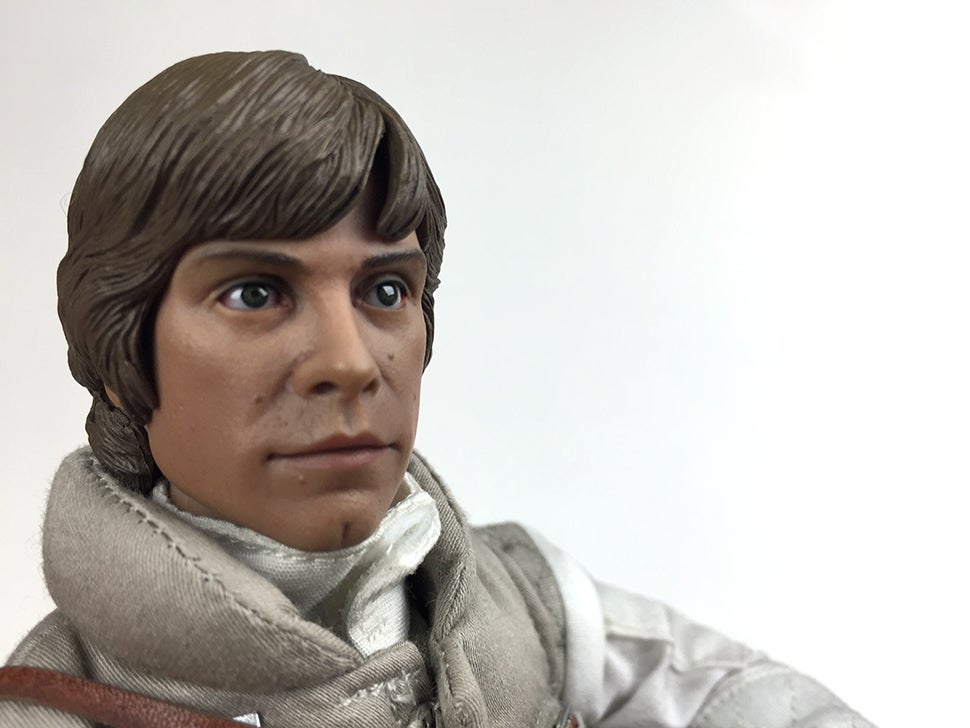 Considering the bruising and scarring from the Wampa attack were used to help cover up Hamill’s real-world injuries from a 1977 car accident, it’s almost eerie seeing him without them.

Those tiny details. An accurate face is nice, but the real star of Sideshow’s sixth-scale line is the clothing. It’s the sewn-in badges. 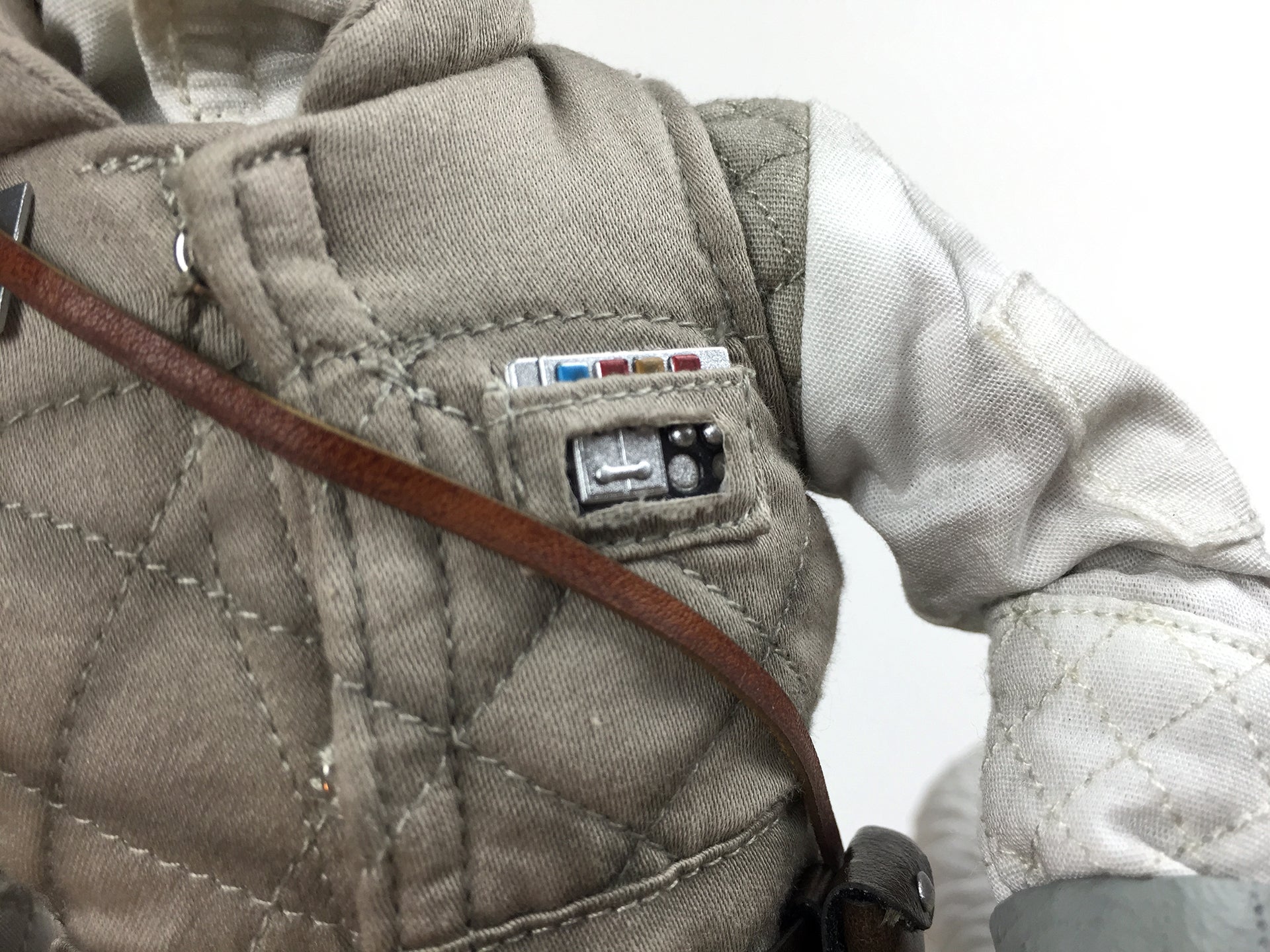 It’s belts with buckles and holsters with magnetic straps. 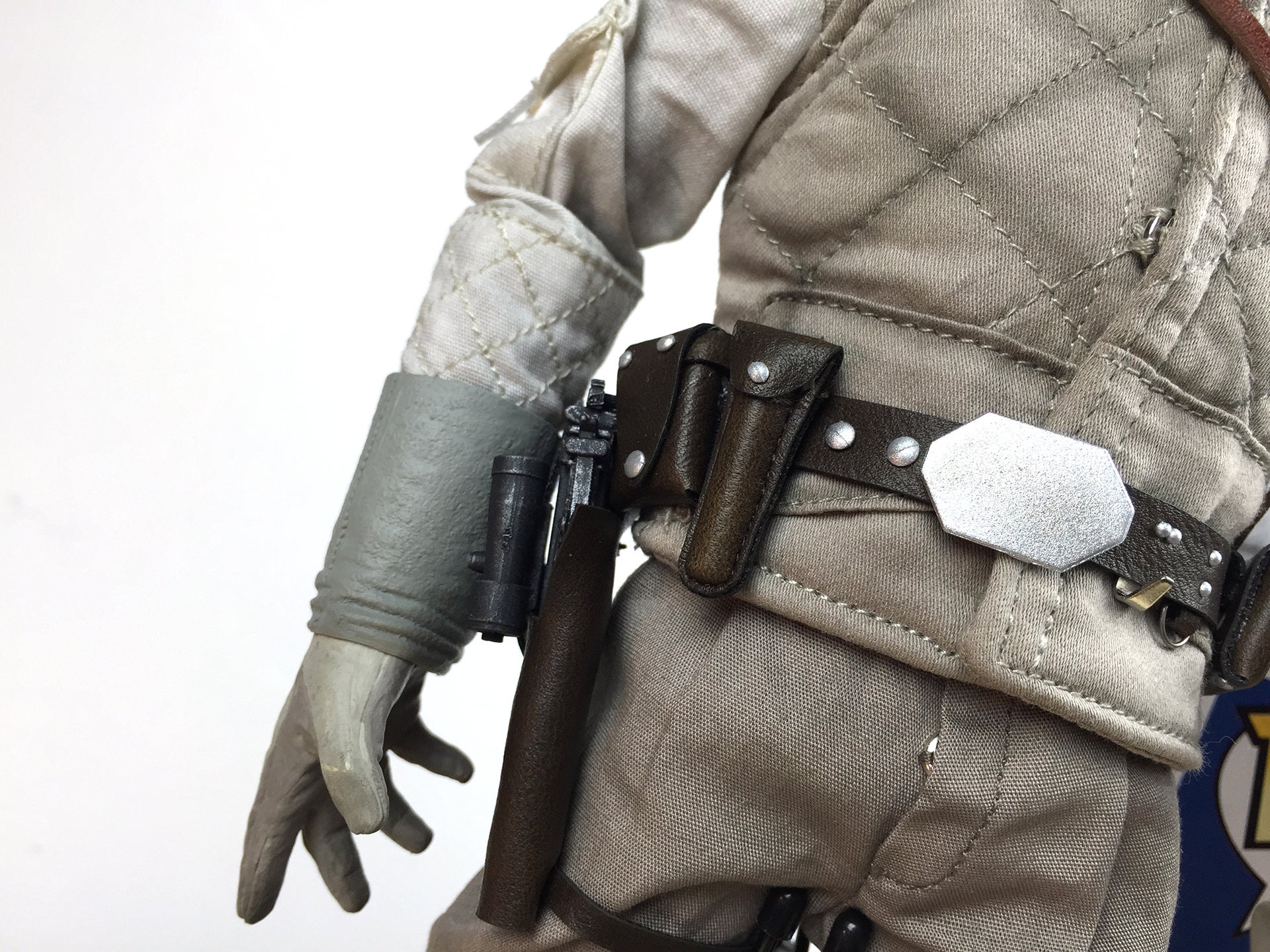 It’s protective goggles that, we’re Luke’s eyes made of eye-meats and not plastic, would protect those eye-meats from harm. 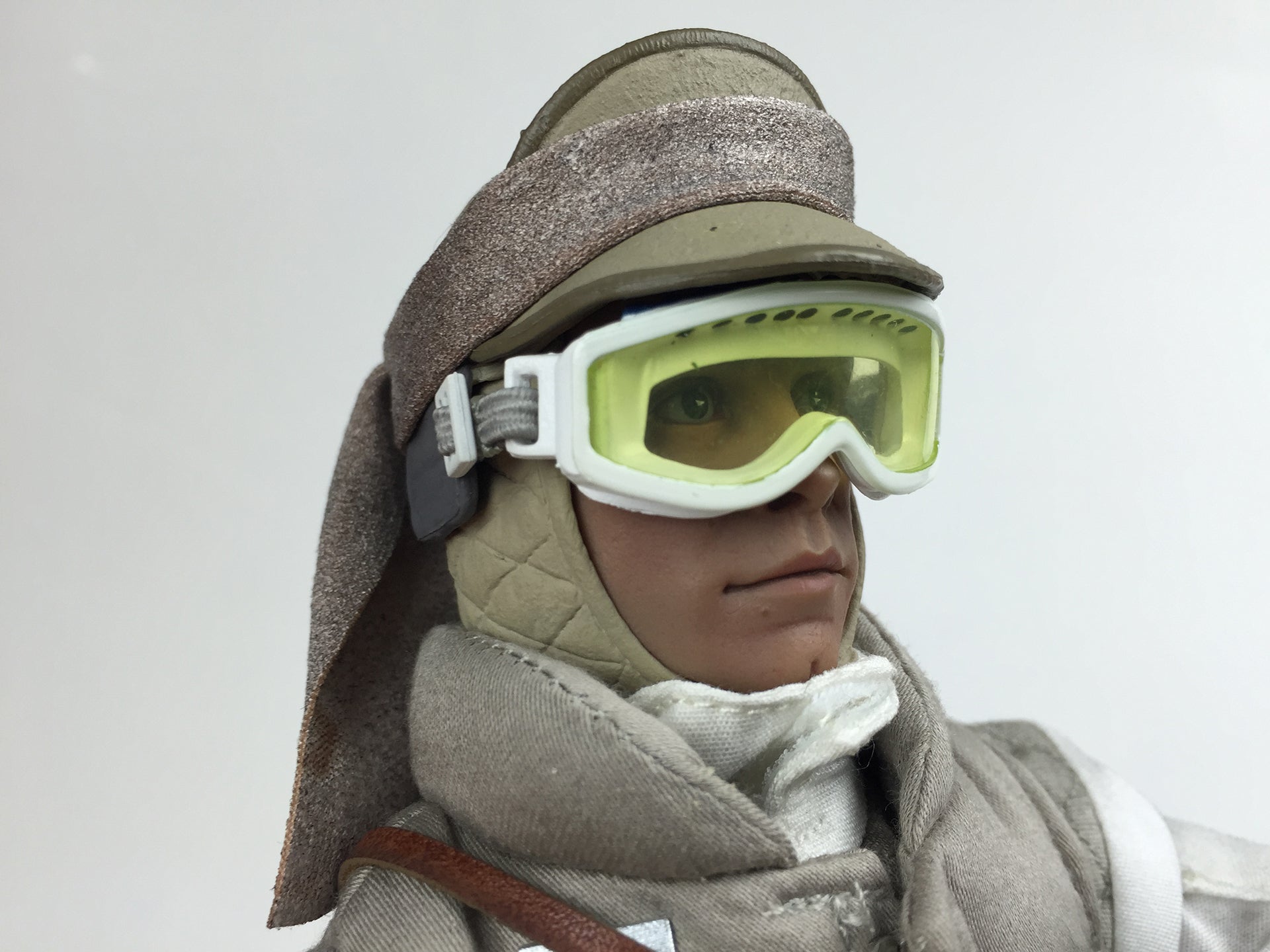 Should one wish, they can unbutton Luke’s jacket and strip him down to his quilted thermal undershirt. His pants even have two buttons. They did not give him underwear, which at first I was going to subtract fictional points for, but the movie was filmed in the late ’70s, early ’80s, so I can buy him going commando.

Weapons of Force destruction. With a pair (well, technically) of lightsabres and his trusty DK-44 at hand, you’d think Luke would be ready for anything. 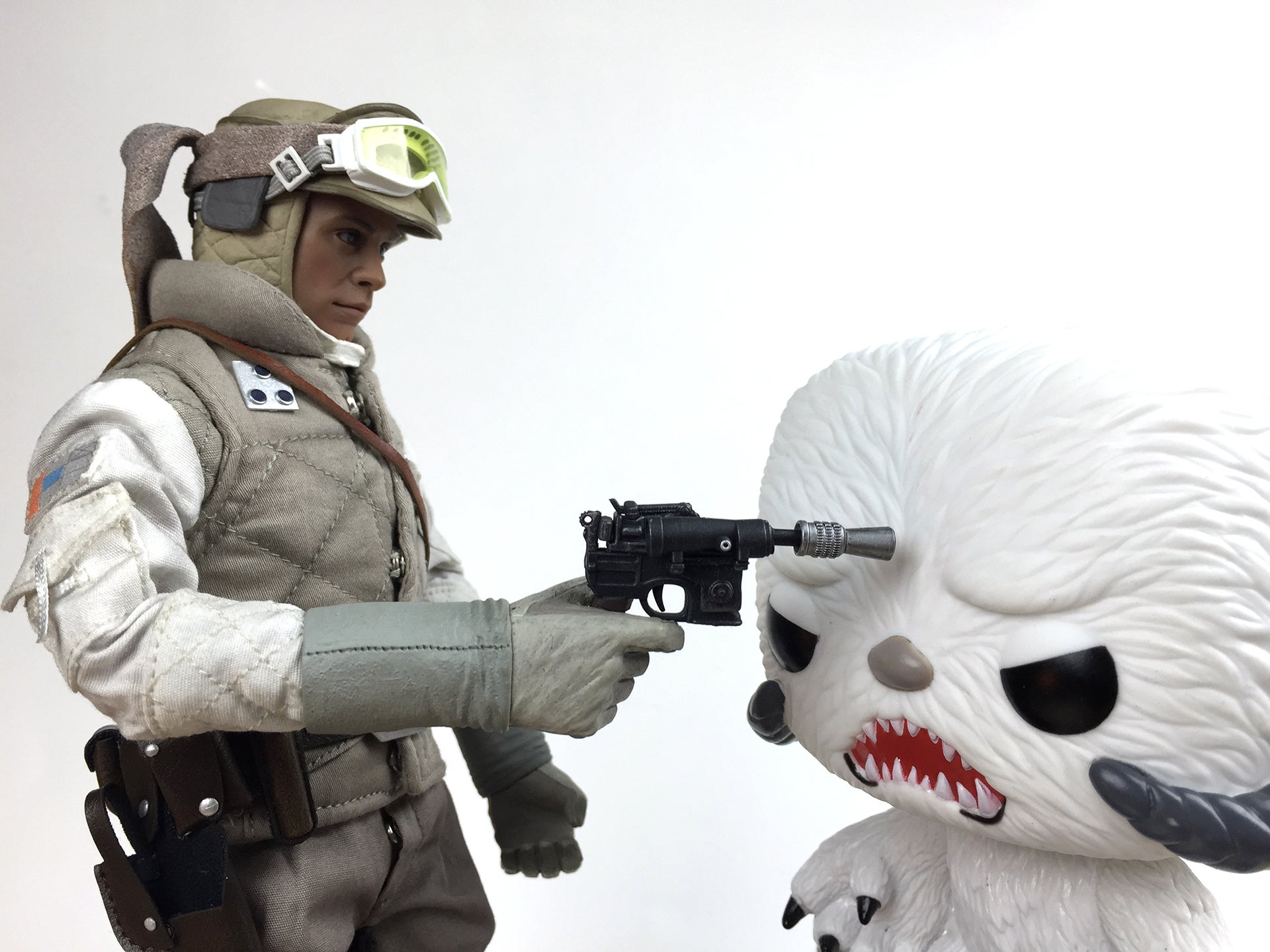 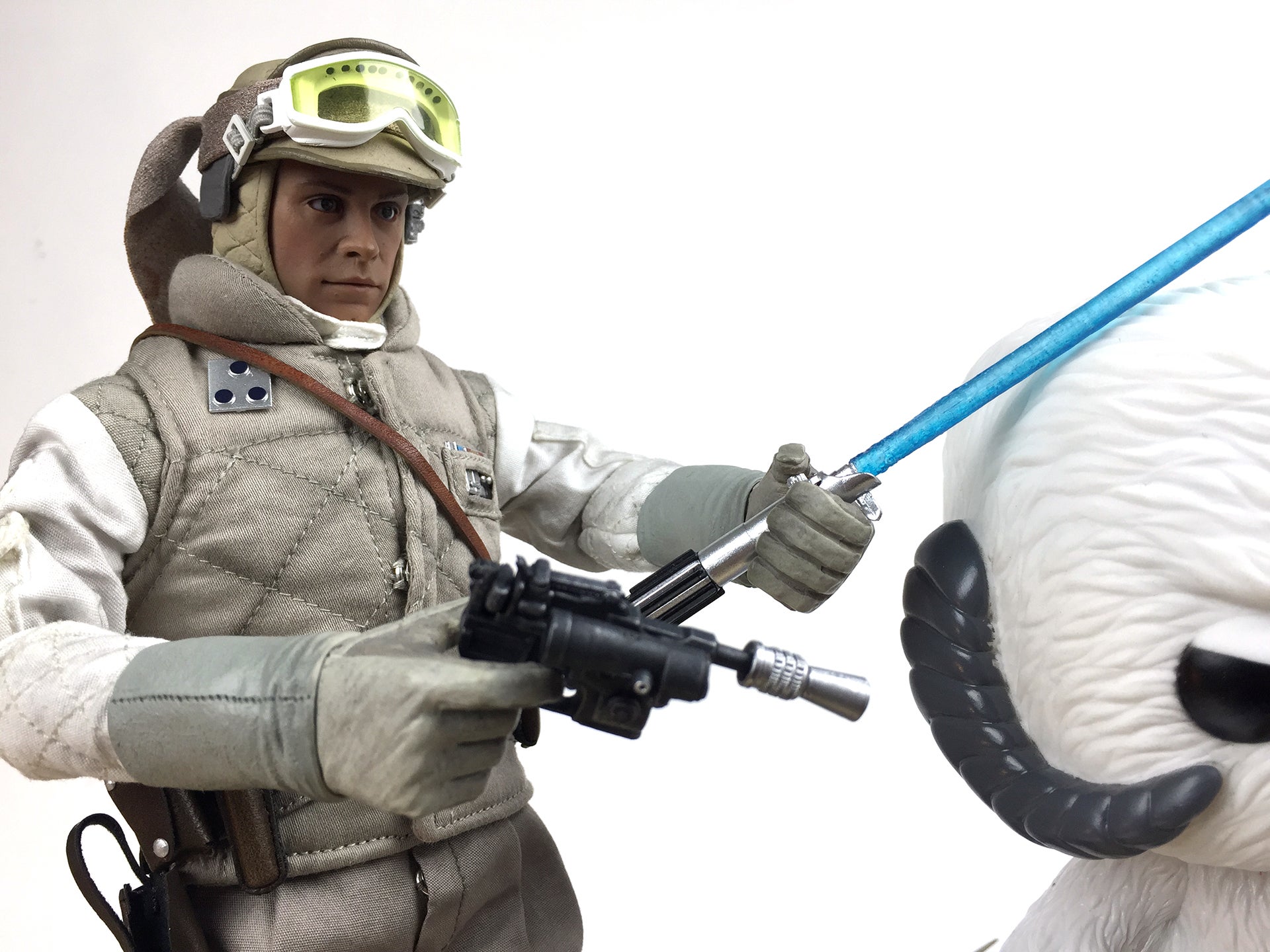 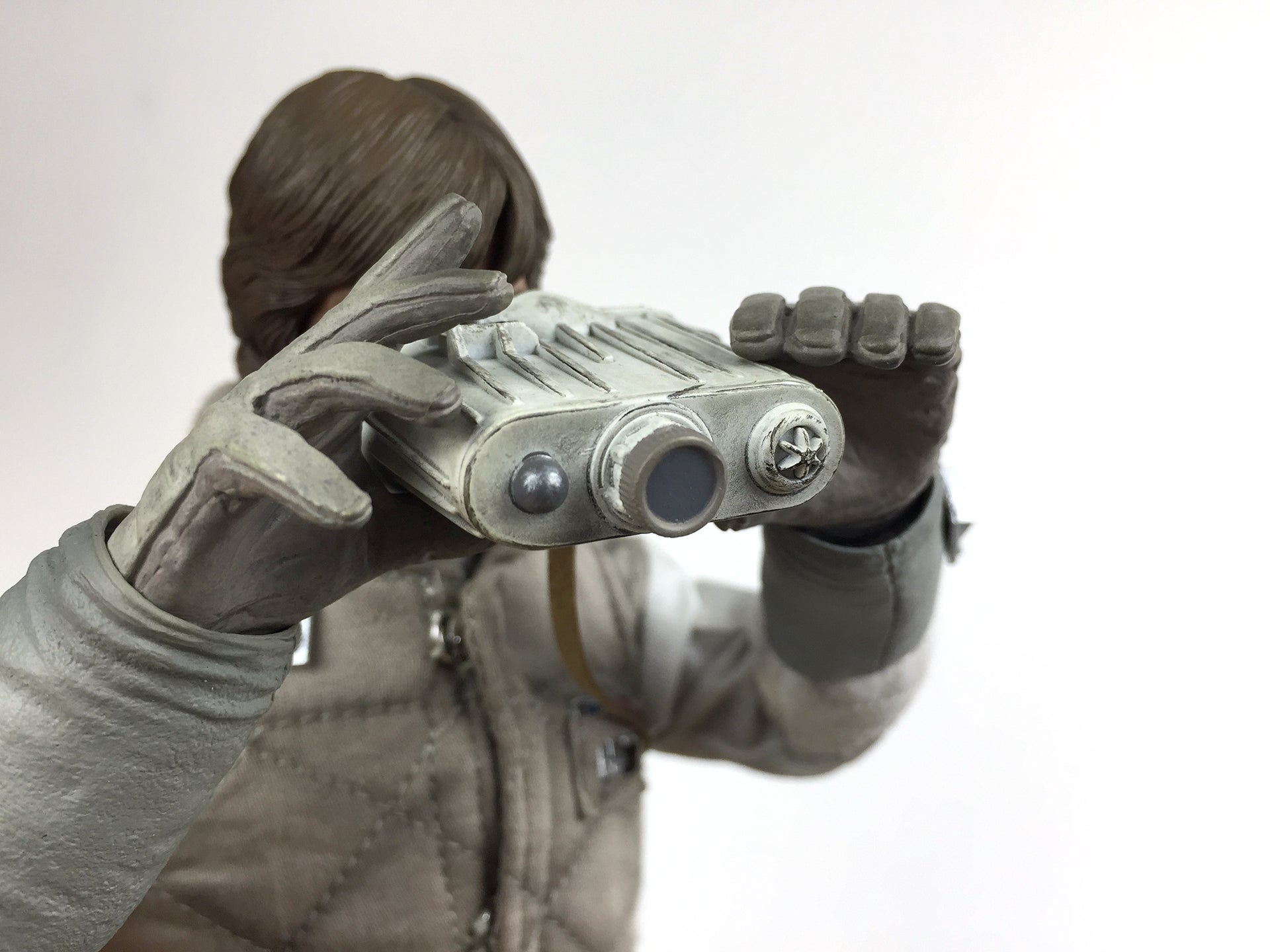 At the very least he’d be able to see the monster coming. 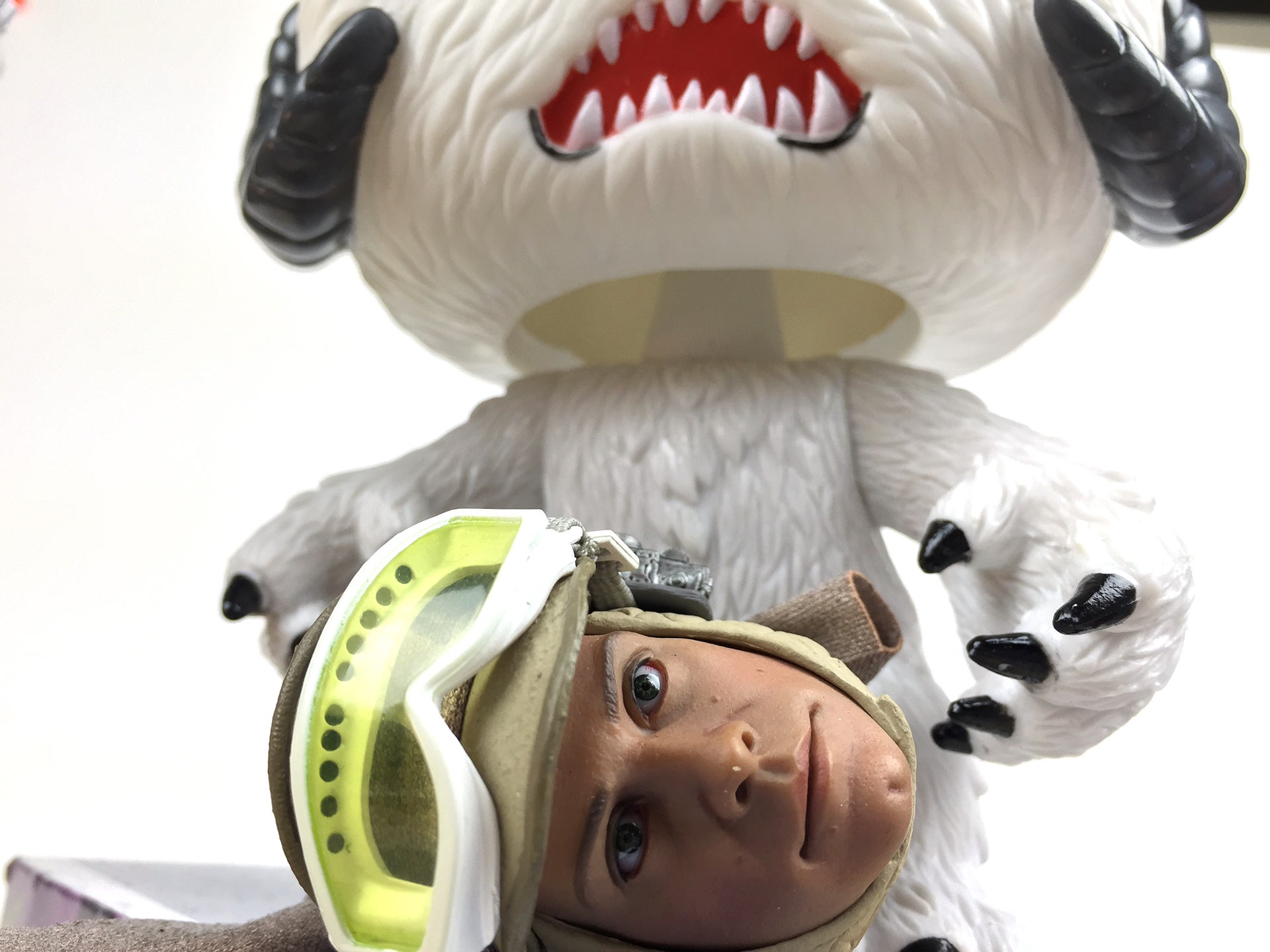 But no. Like I say in the header, he never learns.

Not quite kung-fu grip. For a figure with so many hands, I had serious trouble trying to get Hoth Luke to firmly hold his weapons. 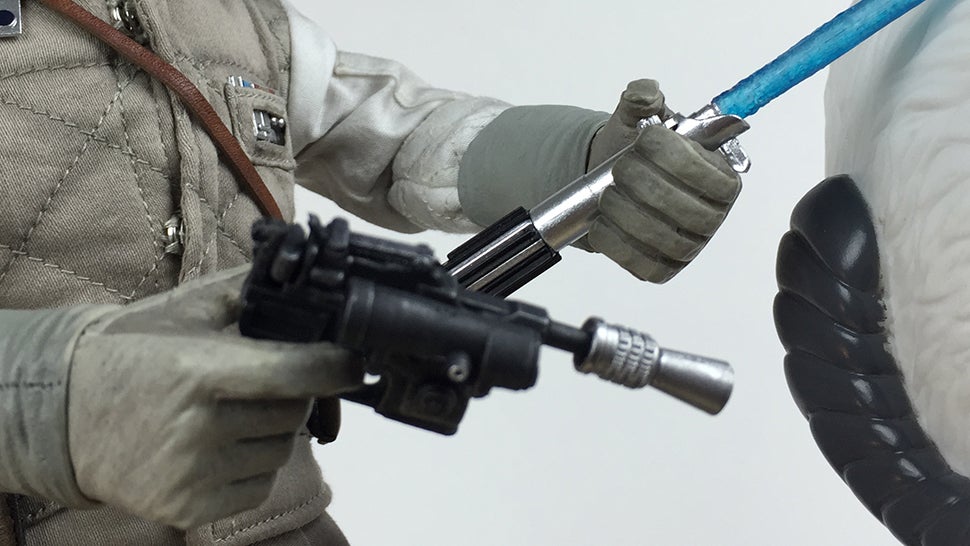 Perhaps they were just numb from the cold. Maybe that’s how the Wampa got the drop on him. Maybe if I applied some pressure to the various fists they’d grip a bit more confidently.

No Wampa currently available. Selling a Hoth Luke without simultaneously making available a similarly-scaled Wampa is like setting chicken nuggets without honey mustard sauce. Will I still buy them? Yes. Will I enjoy them? Probably a great deal. Will I be able to pretend they have been beaten up by an ice creature and the honey mustard is their oozing lifeblood? No. And that’s a shame.

I keep waiting for Sideshow Collectibles to make a really horrible sixth-scale figure, and the continue to fail me. These folks have mastered the art of putting tiny clothes on 30cm fake people that look like full-sized people you may be familiar with. There’s pretty much no point in reviewing any more of these, other than to generate cool pictures of Luke hugging a third-party Wampa. 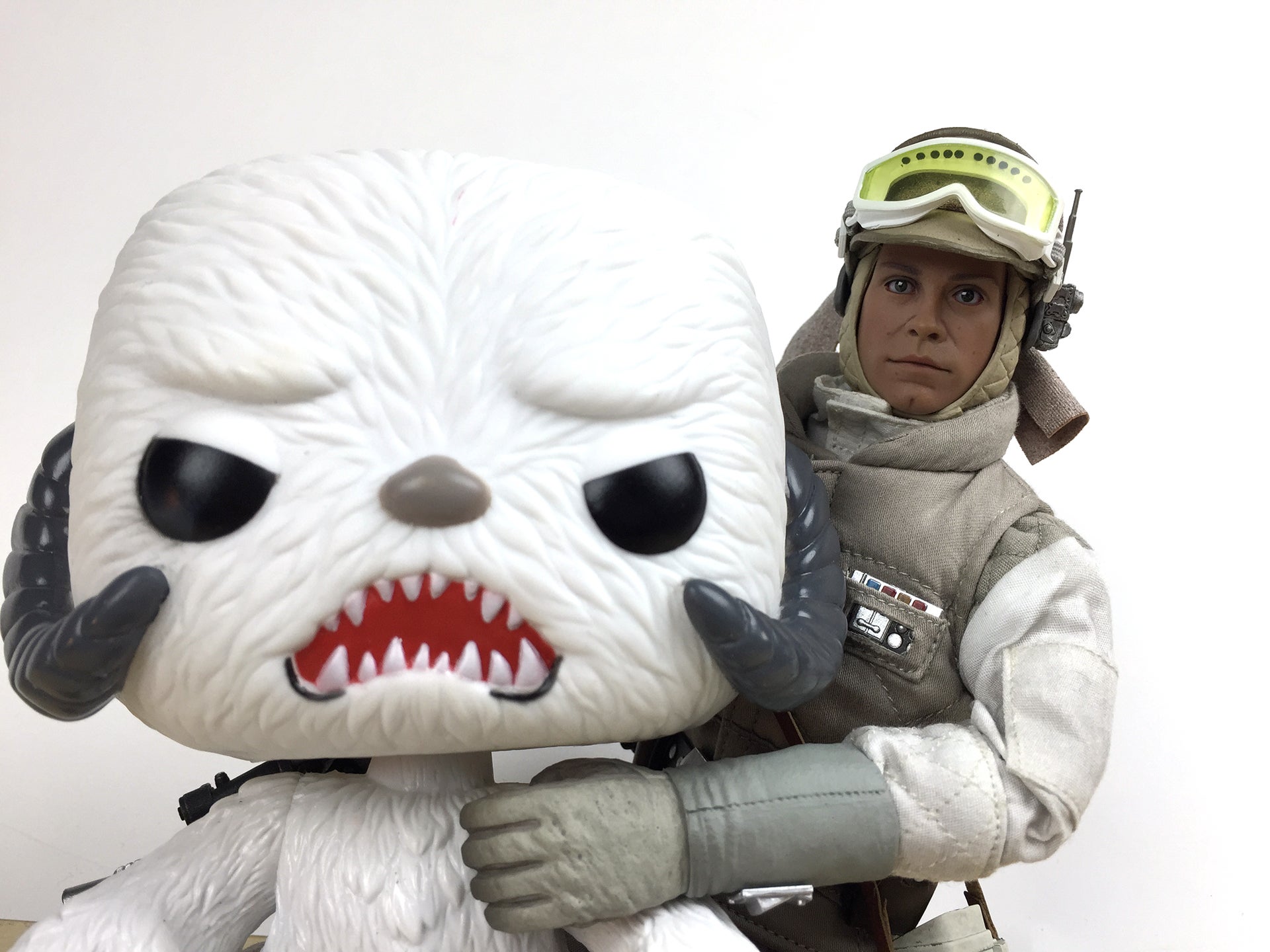 Sixth-scale Commander Luke Skywalker in Hoth Gear is available for preorder at Sideshow Collectibles’ website for $US199.99, with an expected ship date of this month. The Pop! Wampa set me back $US14.99 at Toys’R’Us.