The Honey Badger Brigade, a group of men and women sympathetic to men’s rights activism and calling itself a collective in favour of artistic expression, had its booth removed from the ongoing Calgary Expo today for reportedly disrupting panels and associating with GamerGate.

Calgary Expo is one of Canada’s most popular geek conventions, and like most events, it allows folks associated with geek culture — artists, developers, etc — to register as exhibitors to show and sell their wares on the show floor. The Honey Badger Brigade signed up to be an exhibitor.

GamerGate, a polarising movement more associated with harassment than its ostensible desire to change ethics in video game journalism, has been around since last summer. As an amorphous, anonymous movement, GamerGate’s specific goals are by nature impossible to define, but one thing is undeniable: it’s caused a lot of pain to a lot of people.

Several tweets from this morning suggested one of the exhibitors was proudly demonstrating banners and shirts for GamerGate. It was quickly revealed this was The Honey Badger Brigade.

The Honey Badger Brigade raised more than $US9000 to fund this effort, as part of a “Feed The Badger” campaign. Here’s how they pitched it to people:

“In April of this year, the Honey Badgers plan to put on a booth at the Calgary Comics and Entertainment Expo! We plan to infiltrate nerd culture cunningly disguised as their own. Each of us has been carefully crafting a persona of nerdiness through decades of dedication to comics, science fiction, fantasy, comedy games and other geekery, waiting for this moment, our moment to slip among the unaware. Once there we will start distributing the totalitarian message that nerd and gamer culture is… perfectly wonderful just as it is and should be left alone to go it’s own way.”

While laden with sarcasm, a desire to attend Calgary Expo to promote this viewpoint was clear.

“Our intentions are essentially to support freedom of artistic expression for all creators and the validity of a free marketplace of ideas,” said Honey Badger Brigade co-founder Karen Straughan to me over email.

Calgary Expo has not gotten back about my requests for comment regarding this incident.

Other attendees reported hearing about disruptions at panels during Calgary Expo:

The Mary Sue fielded a report from one member of the “Woman Into Comics” panel:

“We were about fifteen minutes into the panel when a woman in the second row stood up and identified herself as a Men’s Rights Activist. She and her male companion both came to raise issues they felt would not be covered by our panel. Raising points about the way men are portrayed in comics struck a note with all the panelists, as we agreed that we want to see a diversity across body types, characters, races, etc in mainstream comics. Not everyone wants to see a hero who looks like he’s built like Gaston from Beauty and the Beast. They also accused us of presenting all women as victims, which was an outright lie and derailing tactic.

I truly believe in freedom of speech, but coming to a panel with the entire purpose of derailing it and shooting down the voices on the panel isn’t constructive. It appears that was their plan for the expo, to come and to loudly take over the spaces of other people — although it was not violent or threatening, it’s disrespectful, disappointing and offers a prime example of why these panels need to exist in the first place.”

“There had been rumblings overheard by some of us on Thursday,” said Straughan, “that some people on staff or attending were offended that we had posters supporting #gamergate (“Ethics: Stand against censorship”), and that others who were familiar with the Honey Badger Brigade and find us “offensive,” were interested in getting us shut down.”

It was around this time Calgary Expo started responding to comments through Twitter. 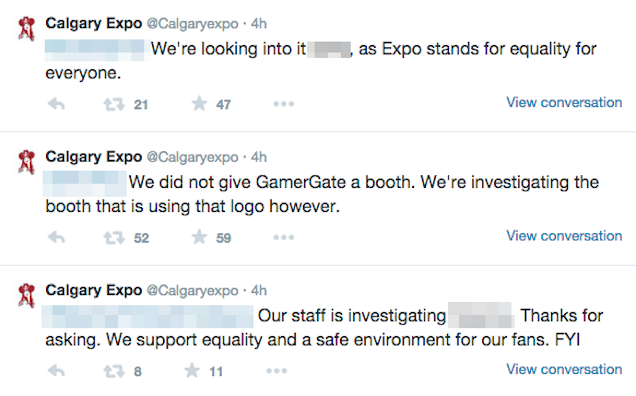 That Calgary Expo would be so quick to respond is not a surprise. As part of this year’s event, it’s been promoting an “Expo Equality” message to make the event feel inclusive and welcoming. https://twitter.com/hashtag/CalgaryExpo?src=hash

Around this time, reports surfaced about The Honey Badger Brigade’s booth being shut down. 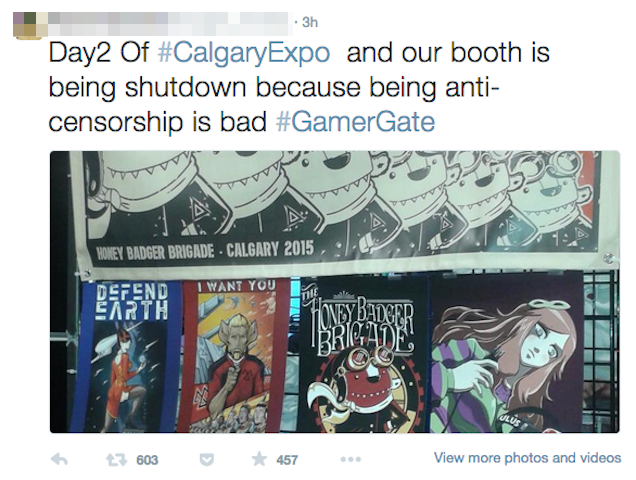 “Our group was expelled from the con,” said Straughan. “Alison Tieman, creator of the Xenospora comic series, was banned from Calgary Expo and all their affiliated events across Canada.”

Calgary Expo has been actively responding to comments and criticisms about its decision on Twitter, expressing it had no desire to allow a GamerGate-themed booth onto the show floor. 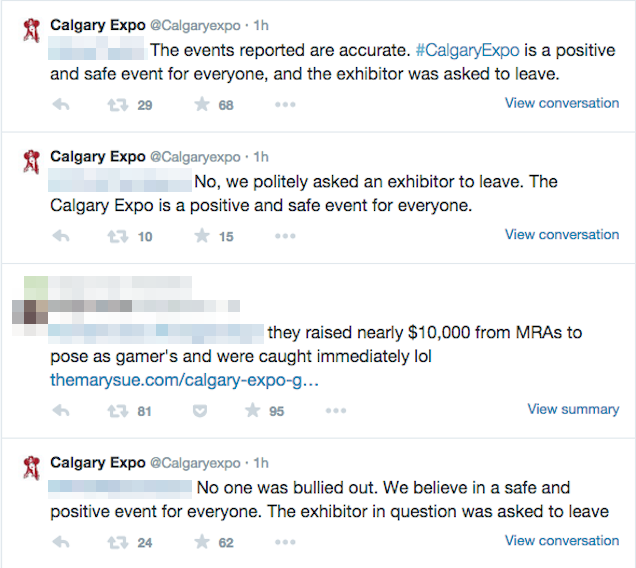 The rest of Calgary Expo runs through this Sunday.