Guitar Hero Is Back, And I Really Like What I’ve Seen

Confession: if I had spent anything like as much time playing actual guitar as I did playing pretend guitar as a teenager, I might have had a very different career path. In the late days of the 2006-9 rhythm-action boom, some hardcore pretend musicians split out into Guitar Hero fans and Rock Band fans, but I always loved both. And DJ Hero, and jubeat, and Pop’n Music, and Amplitude, and any other rhythm-matching game I could get my dextrous hands on. I was both surprised and rather impressed to learn that the Guitar Hero reboot, which is going to be with us by the end of the year, isn’t a straight resurrection of the old game, but instead a brand new one from UK developer Freestyle Games. It’s called Guitar Hero Live.

I mean, the basics are the same: you have a plastic guitar, notes fly down a track towards you, and you hit them to play songs to an audience. But it looks and feels very different, and there’s a new guitar-playing mechanic. Instead of five colourful fret buttons, there are six, and they’re arranged differently across three frets. This is what that looks like: 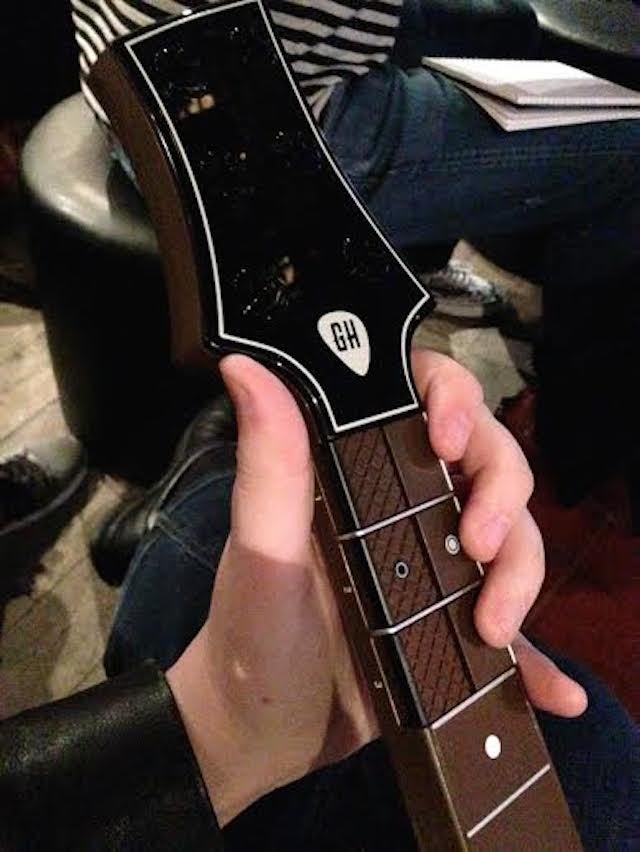 This means that you never actually have to use more than three fingers on your fretting hand to play, though you can still move your hand up and down the neck if you’re used to it. At first it seems that this might make things too easy, but actually, learning to read the new note charts and move your fingers back and forth across frets to reach all six buttons is harder than it looks. As an Expert player on old Guitar Hero, it took me a good fifteen minutes to get to grips with the songs on Normal and accustom myself to a new way of playing. After another half hour I was pretty confident on Advanced, but Veteran (the new Expert) was still beyond my grasp. This is good, though – frankly I’d have been disappointed if I’d picked up a new Guitar Hero game and been able to play it at the highest level in less than an hour.

Two observations on this: firstly, it feels more like making chord shapes on an actual guitar, and secondly, it’s genuinely different from both old Guitar Hero and – I presume – new Rock Band, which seems to be leaving the core systems of old Rock Band intact. But there’s a bigger difference that changes the feel of the game on a more emotional level: it’s all now in first-person, shot with real people. The crowds are real, the band you’re playing with is real, and the venues – from bars to Glastonbury-style festival stages – are real.

When you start a song, you start out backstage. The screen shows a pair of hands (rather more male-looking than my own) fiddling nervously with a plectrum. You look up, and at your other bandmates, who are tapping their feet or looking around nervously (except the lead singer, who of course seems supremely confident). A member of backstage staff appears and nods his head, and you and the band make your way to the side of the stage. A roadie hands you your guitar, you step out, and suddenly there are thousands of people screaming at you and lights in your face. You turn towards the drummer, she gives you a nod, and the song kicks in. 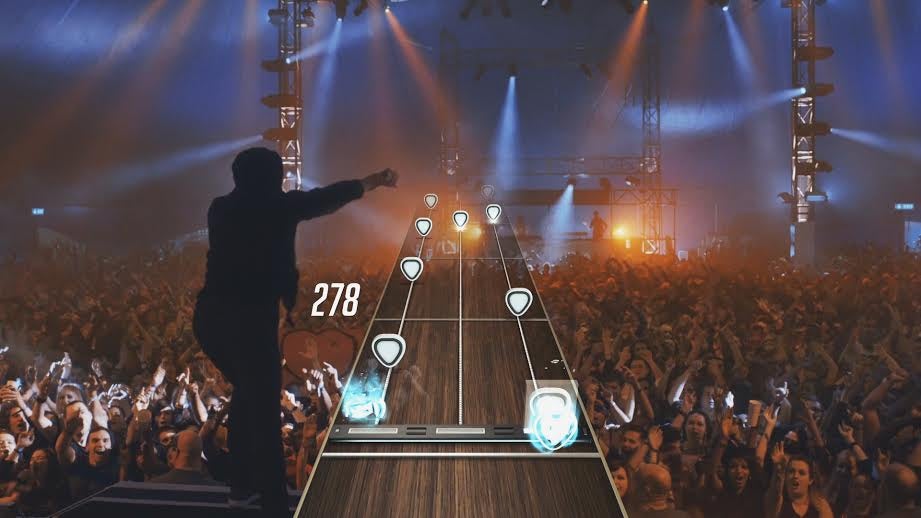 It’s awesome, actually. It feels like you’re really playing live in front of an audience. It made me feel nervous and excited; it even gave me mild stage fright. Both your band-mates and the crowd respond to you as you play, so when you’re hitting every note the singer is screaming delightedly in your face and the crowd’s going nuts and the roadies are giving you thumbs-ups when you glance to the side of the stage. Rather less encouragingly, when you start to fail, the crowd will stop dancing, a man with dreadlocks will yell “YOU SUCK!” from the front row, and the drummer will be staring at you as if you’ve just murdered her father in front of her. There’s no outright fail-state any more, but it doesn’t feel good when you’re messing up.

The sound is dynamic, too, so as you move around the stage you’ll hear louder drums or crowd noise or singing depending on where you’re standing. It’s easy to suspend your disbelief and feel like you’re really there. Frankly, older rhythm-action games can’t touch this sense of realism. 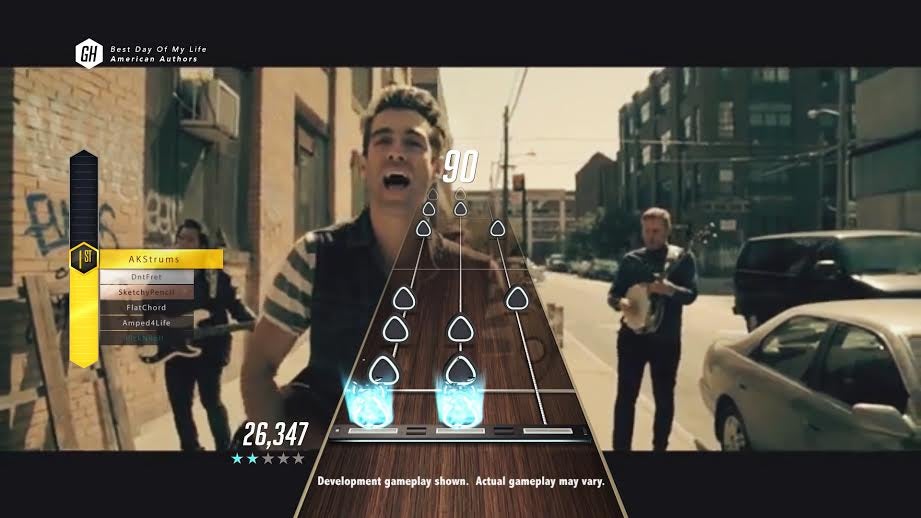 Like new Rock Band, Guitar Hero Live is jettisoning the now-outdated model of yearly disc releases and relying on downloads. Its major innovation is this thing called Guitar Hero TV, which is essentially a playable music video network where you can drop in and out of different genre-themed channels and join people across the world in playing whatever’s on whilst the relevant music video plays in the background. It’s like Just Dance‘s World Dance Floor mode. I saw Ed Sheeran, Of Monsters and Men, and American Authors’ Best Day of My Life, which… well, again, not for me. But there was also Gary Clark Jr, so it looks like there’s going to be a bit of everything. Interestingly, all of this will work across all consoles AND on mobiles and tablets if you have the guitar peripheral. There will be live and local multiplayer, too.

If DJ Hero is anything to go by, though, the people at Freestyle Games have pretty excellent (and eclectic) taste, so I’m fairly sure that this game won’t be full of middle-of-the-road music. The big challenge for Guitar Hero Live might be persuading people who survived the ’00s music-game boon without going bankrupt that they want to buy another plastic instrument – though frankly, I couldn’t wait to get my hands on it. It’s been five years, and that’s a long time in video games.