Today, Valve changed the mod-making game bigtime: creators can now charge for modifications to pre-existing games on Steam Workshop. Some people are hopeful, others are worried — and even infuriated.

Obviously, paying for mods — even just as an option — is a pretty big change from what people are used to. It's not uncommon for people to ask for donations, a nickel or two going clink in the cup, but charging upfront? Definitely not the standard. Some, however, are worried that it could become the norm, not the exception, which would fundamentally alter the mod scene. Mods, they fear (and have, to a small extent, observed), will stop updating for those who don't pay, will abandon mod-centric services like Nexus for Steam's greener pastures. 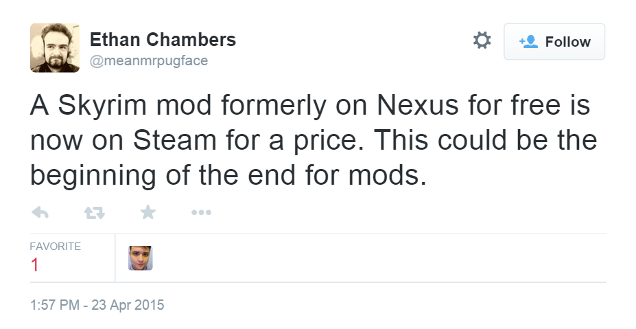 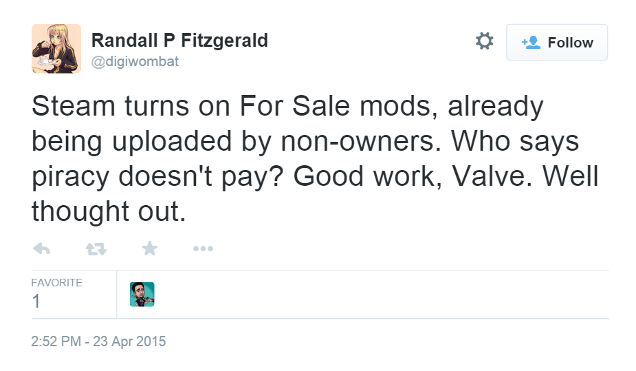 From Steam, which is overflowing with similar threads: 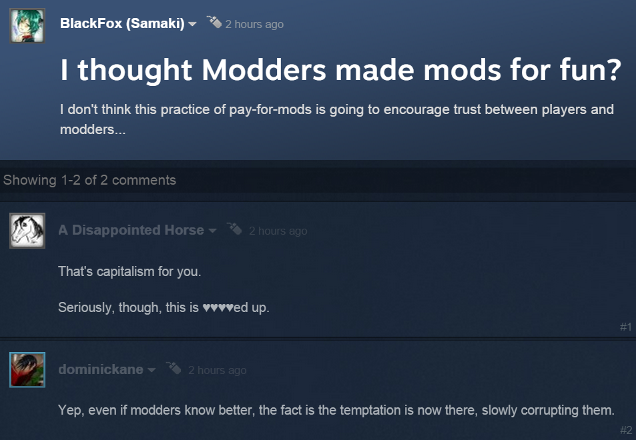 From our own comments: 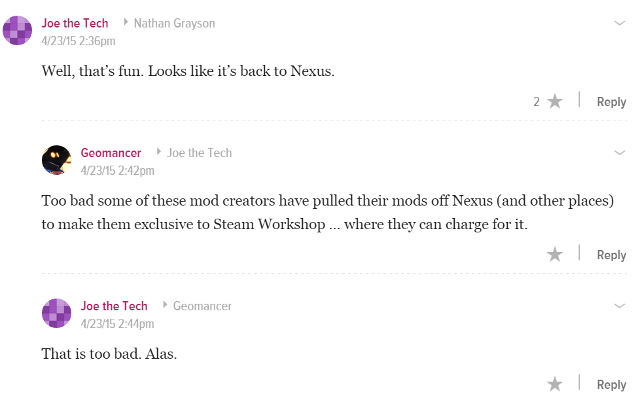 And the comment threads on some Steam Workshop Skyrim mods have gotten downright ugly. 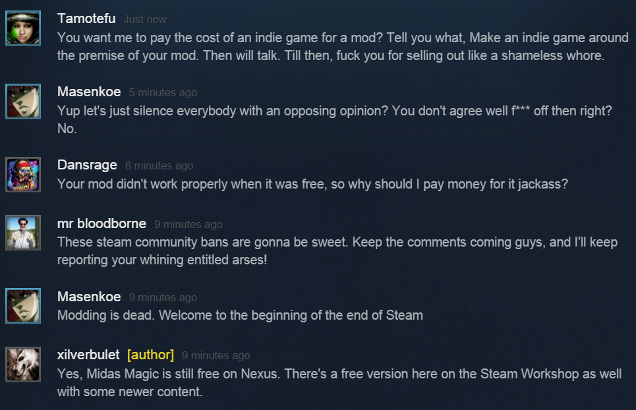 Meanwhile, Nexus owner and admin Dark0ne, in a prescient post last month, speculated about what would happen if people started charging for mods, adding that he doesn't plan to change a thing about the way Nexus operates. He worries that tossing money into the pot might hurt both modmakers and those who play them:

"How many mods on the Nexus use assets made by other mod authors? How many are made better by this? Such assets are used with the express permission of the creators of those assets. If a mod author came to you and asked if he could use some of your work in their mod that they were planning to sell for $US5, would you feel more or less inclined to give him that permission? Would you, perhaps rightly, ask for a cut of the proceeds, a revenue share of your own? If you're one of those great authors who releases your mods freely for others to make use of in their mods, or a modder's resource developer, are you going to think about revisiting all your permissions in light of money entering the modding community? Are you still thinking about being so generous with your work?"

"The worry is with the introduction of Curated Workshops that free and open modding will be removed entirely, as in, it just won't be possible to do... If you ask me, my main concern now is the DRMification and closing down of free and open modding, the concept that modding can only take place if it's done through one official platform to the detriment of all others. Because up until now that's definitely not what modding has been about at all."

Meanwhile, others are concerned about how little mod creators are actually making off this deal: 25 per cent of revenues in Skyrim's case. They think game publishers might end up taking nearly the entire pie, leaving creators with only rib-sticking slivers. In their eyes, it's a lose-lose situation for everyone — mod creators and players alike — except publishers. 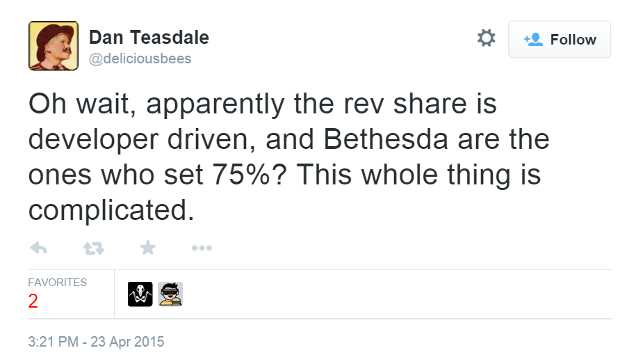 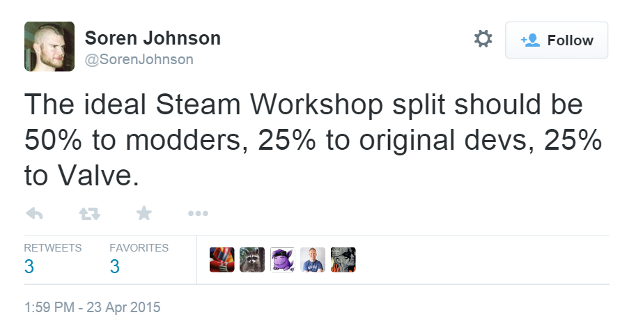 (Note: Valve has confirmed to me that publishers/developers get to decide the amount of revenue they take from mods if they choose to let players sell them. Valve, meanwhile, takes "the same share of sales as any other microtransaction sale.")

Unsurprisingly (given that this is, after all, The Internet), there's already a petition to have the paid portion of Steam Workshop hurled back into the deepest recesses of Valve's mad mod laboratory. As of writing it had over three thousand signatures.

But others see potential in Steam Workshop's megaton bomb of a new feature, even as it leaks radiation everywhere, shows its cracks and flaws. Modders and game developers, especially, seem to be leaning more toward the optimistic side of the spectrum. Creators like Jimo have embraced the system fully, going so far as to collaborate with Valve to help launch the paid-for portion of the Steam Workshop.

Meanwhile, developers like Offworld Trading Company creator (and former Civilisation designer) Soren Johnson being so bold as to say: 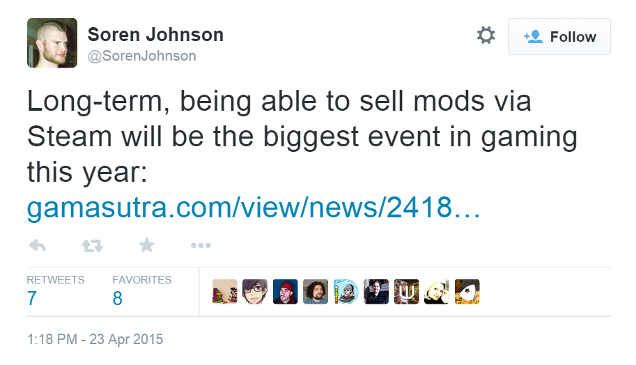 Emerald Kindgom's production director verbalized what many people on the pro-charging-for-mods side of things are feeling: modders are developers too, and they should be afforded similar options and opportunities. 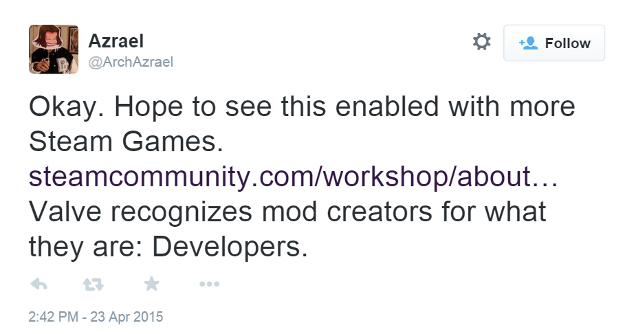 Campo Santo (Firewatch) creative director Jake Rodkin added that this feels like a continuation of Valve's history of hiring on and otherwise supporting mod teams. Difference is, now everybody gets a chance to benefit instead of only a select few: 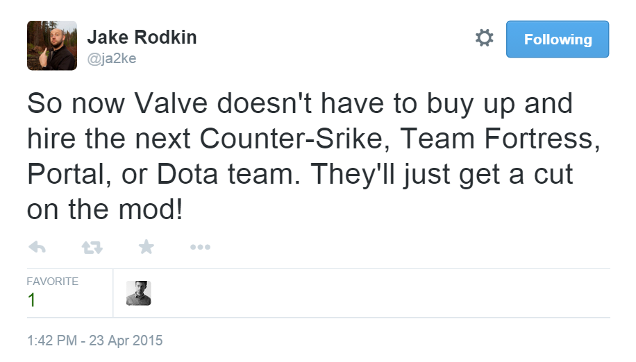 And modder Giskard chimed in with this particularly poignant snapshot of the longstanding tensions between some Steam community members and modders:

Players have been flaming modders for years, they rarely say thank you and hardly ever use a donate button. So paying for mods offers some compensation for the abuse we get.

I personally could make a million from selling my mods easily. I have about 30 large quest mods for various Bethesda games and 5 top notch ones for Skyrim. Nexus has nothing that comes close to them. So I could become very rich, very quickly because I am one of the most hard working TES modders on this planet.

I would share a link to prove it by Steam consider modders that talk about their work on here to be spammers and suspend our accounts if we do it. So your just going to have to use your imaginations.

Fact is though, Steam has proven time and time again it simply does not understand modders or the modding community. This is just the latest but of proof that the concept of a fun hobbit is beyond them. I removed my work from steam last year because i felt they wanted the benefit of hosting mods without wanting to give modders the support we expect. So I walked away.

Sadly this charging for mods opens the door to flaming, court cases, fraud and reasons to steal mods to make a buck. But it is also an opportunity, your going to find out who the real modders are, your going consider it a badge of honour to be a free mod maker. And hopefully your going to treat us better than you have been because if you dont, we can always sell our mods and become rich at your expense. This could be thing that makes modding communities friendly again..... lets hope so.

Others voiced more general support, accepting that any launch will be rocky, but solid fundamental ideas will (hopefully) win the day. 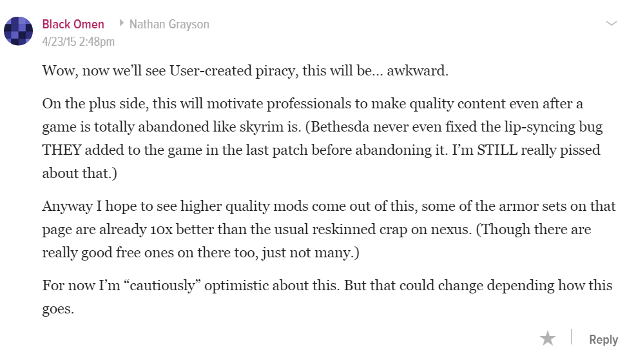 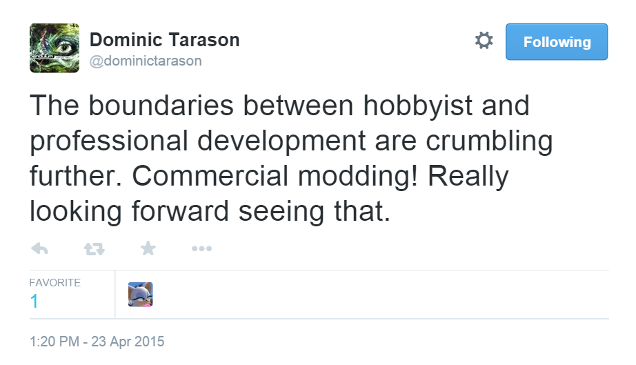 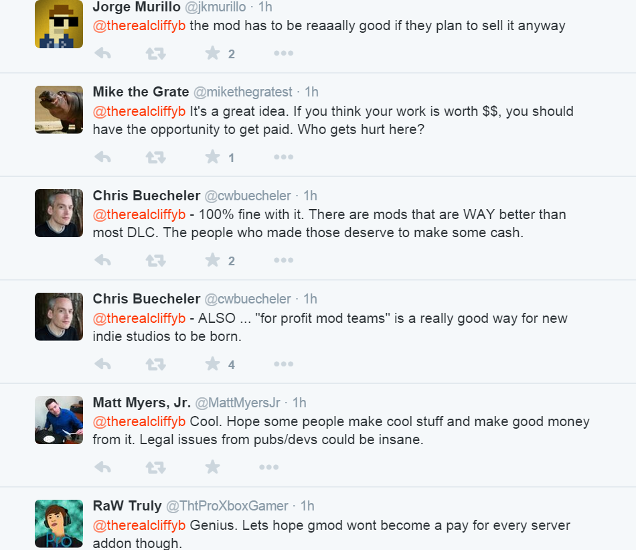 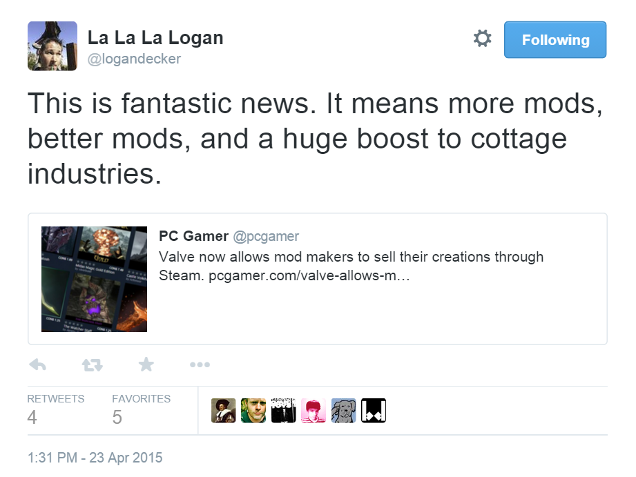 For now, we'll just have to wait and see exactly what comes of this. There are still tons of unanswered questions, but one thing's for sure: this is big. The risks are big, the potential rewards are big. The highs are stratospheric, the lows are apocalyptic. In an ideal world, mods will function like smaller games: some will cost a little money, others will be free. By and large, everything will settle out to a happy midpoint. It's tough to say, though. Mods are a different animal with extremely different DNA, different culture, different baggage, and Valve's system certainly isn't perfect yet (see: people trying to sell other people's stuff, etc). What do you think? Are we on the cusp of something great, or terrible?