The Pros And Cons Of Paid Steam Mods 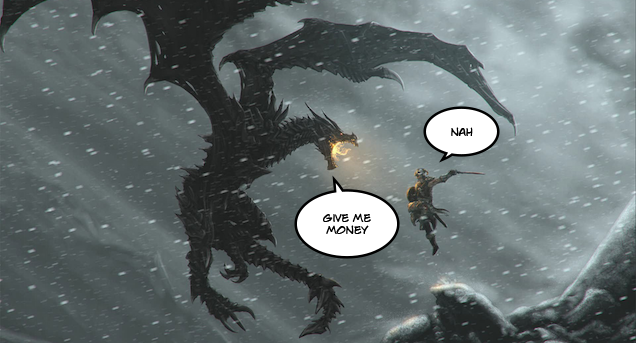 That was some week for PC gamers, huh? Last Thursday, Valve announced a new feature that would let Steam users charge for Skyrim mods. By Monday, following severe backlash, it was gone.

Let's zoom out and try to take a fair look at the pros and cons of Steam supporting paid mods.

Modders deserve to be paid for their work.

This one's obvious, don't you think? The people who create mods for games like Skyrim aren't just hacking together Thomas the Tank Engine files and calling it a day; some talented volunteer developers are patching bugs, smoothing out the UI, and adding all sorts of other improvements that can make your game experience way better. For Skyrim alone there are mods that add new weather mechanics, mods that change how the game opens, and even mods that create entire new regions full of quests, items, and stories.

Not all of these mods are good, of course. But it's undeniable that individuals are dedicating thousands of hours to development work — sometimes work the original developers should have done in the first place! — and it's perfectly fair to argue that this work should be rewarded. Which also leads to our next pro...

Again, it's easy to see this point: talented artists and programmers who might otherwise not bother with video game modding might change their minds if there were a financial incentive involved, particularly if those developers just can't afford to do any work for free. If you know you could potentially make a ton of money by creating some awesome expansion pack for Skyrim, wouldn't you put a lot more effort into it than you would if you were just giving it away?

(Garry Newmann, who created one of the most iconic game mods in history, agrees.)

More publishers and developers could start getting into modding.

Some big companies that make PC games — Rockstar, for example — don't officially support mods or provide a whole lot of support and tools for people who want to customise their games. But if they started making money off mods for games like Grand Theft Auto V, they'd be a whole lot more likely to join the party.

Nobody has to sell their mods.

Want to make something and give it away? Go ahead! Valve's plan as it stood made mod selling totally optional, as it should be.

It can ruin communities.

One of the biggest problems with Valve's initiative, as we found out over the past few days, was that they kicked it off by contacting a handful of modders and telling them about the plan, asking them to sign NDAs in exchange for a place in the marketplace. Immediately, this fractured the Skyrim modding community, facilitating paranoia and leading to all kinds of arguments and drama. Instead of just creating things, modders now had to worry about money driving wedges between those who wanted to sell their mods and those who wanted to give them away. Plus...

The modding scene is a tangled web of rights and requirements.

As we already saw in one high-profile case of mod-selling gone awry, video game modding isn't as simple as "guy makes mod and sells it." Like video game development, modding is usually a collaborative, iterative process where people build off each other's work, integrating various tools and bug fixes so nobody has to write the same code more than once. When you download a mod that, say, adds a new region full of characters and quests, you might also have to download another modder's animation pack, or someone else's interface tweaks, or some other set of tools and assets.

It's a messy world, which is perfectly fine when everyone's just giving everything away. But when some modders want to sell their work and others are strictly against it, things get complicated. Even if everyone agreed that charging for mods was OK, these situations can get a little absurd. What if you want to buy Mod A for $US20 but it won't run without Mod B, which costs another $US10? How do the curators account for situations like that?

Less than a day after the Skyrim program launched, someone was trying to sell an apple for $US30. Someone else promised to make one of the game's bears bigger in exchange for $US100. Although these ridiculous mods would have to go through an approval process to officially hit the marketplace, it's become clear that curation of paid mods on a broader scale will be nothing short of a nightmare — it will make the Apple Store look like friggin' GOG. And what happens when people start wanting refunds? What if mods are buggy, or don't deliver on their promises? Introducing money and real responsibility into what's traditionally been a free-for-all community seems like a disaster waiting to happen.

A paid ecosystem would make it way more difficult for modders to play around with copyrighted materials, as if any big corporation got even a whiff of someone potentially selling mods with any of their licenses, shit would hit the fan. If we lose Thomas the Tank Engine in Skyrim, I don't even know what I'll do.

There are other potential cons here, too — for example, the life or a death of a program like this could depend on how revenue is split. With Valve's plan, modders only took home 25 per cent of profits, which most people saw as way too low. Other potential issues include the continued viability of tutorials and open-source forums; the possibility that some enterprising capitalists might swoop into the mod store and undercut other people's products; and all sorts of other risks that would inevitably emerge.

So, yes. This stuff is complicated. It might be able to work one day, but before that happens, even the smartest curators in the world would need to take the time to talk to modding communities and listen to their concerns. And whoever tries to wade into the world of paid modding next — whether it's Valve or some other brave group of souls — will be in for one hell of a challenge.