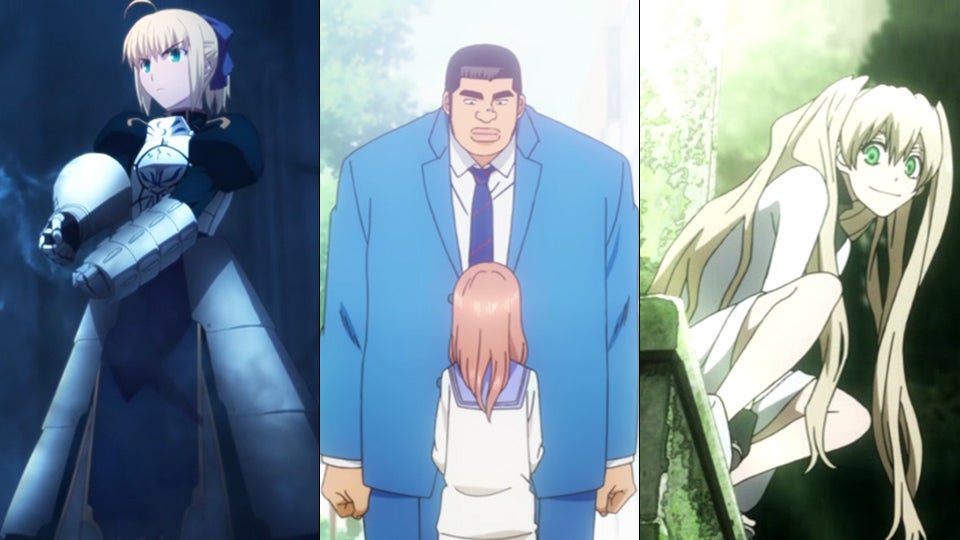 This season, there are 50 new anime on the air, so it can be more than a little difficult to know which ones to watch. But now that the season has reached its half-way point, we come bearing our recommendations.

Fellow Kotaku author Toshi Nakamurai and I have spent the past few weeks getting fully caught up on all the Q2 2015 season's most well-recommended anime (as well as several additional ones that just happened to catch our respective eyes). Now we are ready to dole out what we think are the five you should definitely try out.

Of course, keep in mind as you read that these are simply the anime that should not be missed this season. There are many more airing currently that are perfectly watchable — and many that are downright enjoyable. The following, however, are the cream of the crop. 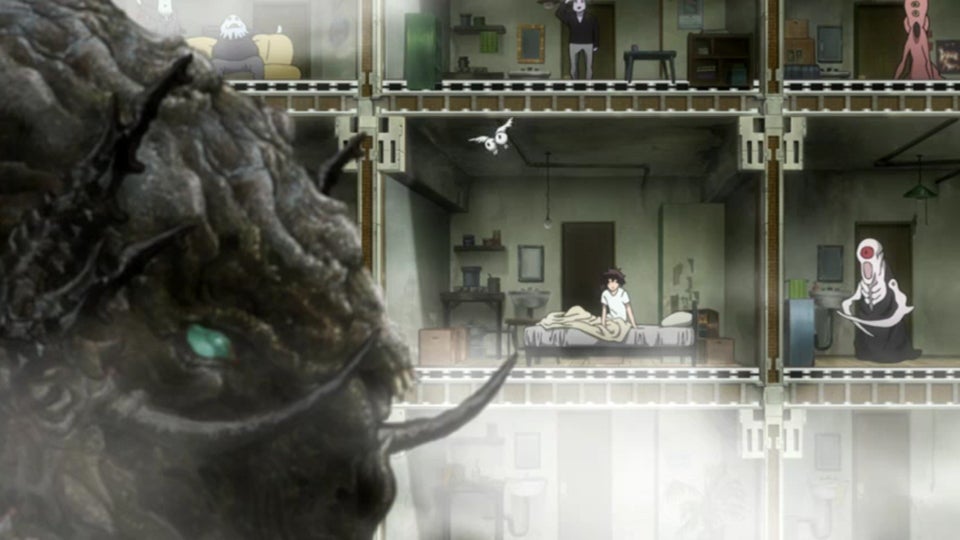 Non-Spoiler Plot Summary: Three years ago, a magical event occurred in New York City, connecting it to a dimension filled with demons, vampires, and eldritch abominations — and largely isolating it from the outside world.

Now, the city has become an interdimensional melting pot where humans and monsters live together and what was once supernatural has become the norm. However, with both humans and otherworldly denizens attempting to exploit the city and its population, it falls to the superhuman team known as "Libra" to maintain balance.

Why You Should Watch It: In a lot of ways, Blood Blockade Battlefront feels like some of the most popular anime of the '90s. It's a largely episodic anime filled with crazy characters, over-the-top adventures, and a setting that is equal parts familiar and alien. It's also got a great mix of action, drama, and comedy.

Moreover, Libra is less a superhero team managing to save the day and more a group of powerful misfits doing their best at damage control. While their hearts are usually in the right place, they often cause as much damage as they prevent in their attempts to save the city (or the world itself) from imminent destruction.

The real star of the show is the city itself and watching the backgrounds can be as entertaining as watching the plot unfold. It is a setting that allows for both the serious and the silly — from vampire invasions and demonic drug rings to magical games of chess and thieving monkeys with super speed. Add into this an everyman protagonist as well as the members of Libra and you get a truly explosive — not to mention entertaining — mix.

Watch It If You Like: Cowboy Bebop, Big O, Durarara. 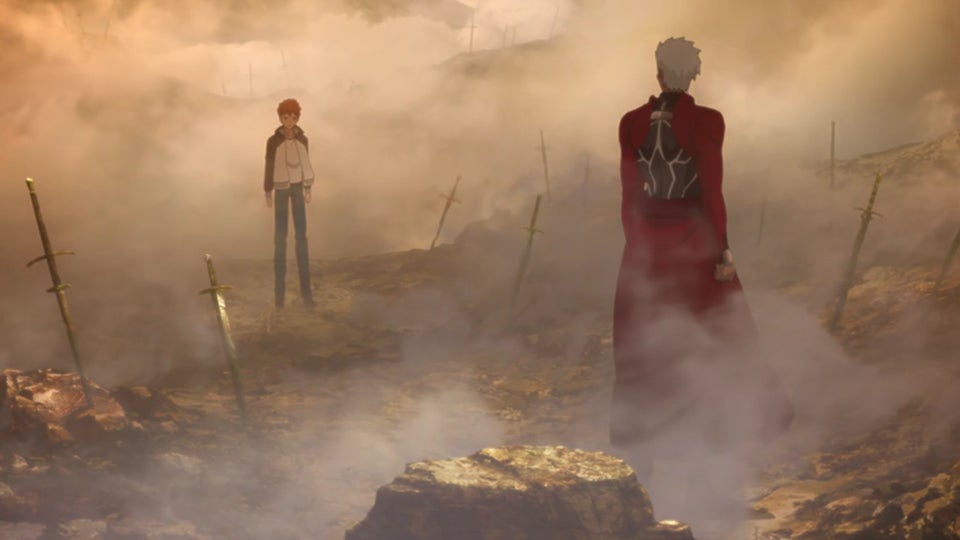 Non-Spoiler Plot Summary: This is the second season of an anime that follows seven mages paired with seven legendary heroes from across history all battling it out for the ultimate prize: the wish-granting holy grail.

The first season ended with our heroes Shiro and Rin at a low point both in their struggle to win the grail and in their deepening relationship. However, as the saying goes: "when things are at their lowest, there is no place to go but up" — unless of course you still have more to lose than you realised.

Why You Should Watch It: Many anime build tension by stacking the odds against the heroes — making it seem as if they have no way to win. Unlimited Blade Works does this, then tilts the scales even further against our heroes as soon as victory starts to seem possible. And just when it seems Shiro and Rin may overcome even those additional obstacles, the situation gets even worse. In this way, Unlimited Blade Works keeps you on the edge of your seat as you watch the two struggle on, rooting for them despite (or perhaps because of) the increasing dangers they face.

On top of that Unlimited Blade Works is, hands down, the best-looking anime of the season — and a strong contender for the best-looking of the past decade. The use of light and shadow both in and out of action scenes is simply stunning. The fluidity and quality of the animation is far beyond even most theatrical releases. Even if the story weren't great, this one would be worth watching just for the art.

Watch It If You Like: Fate/Zero, Fate/Stay Night, Shaman King 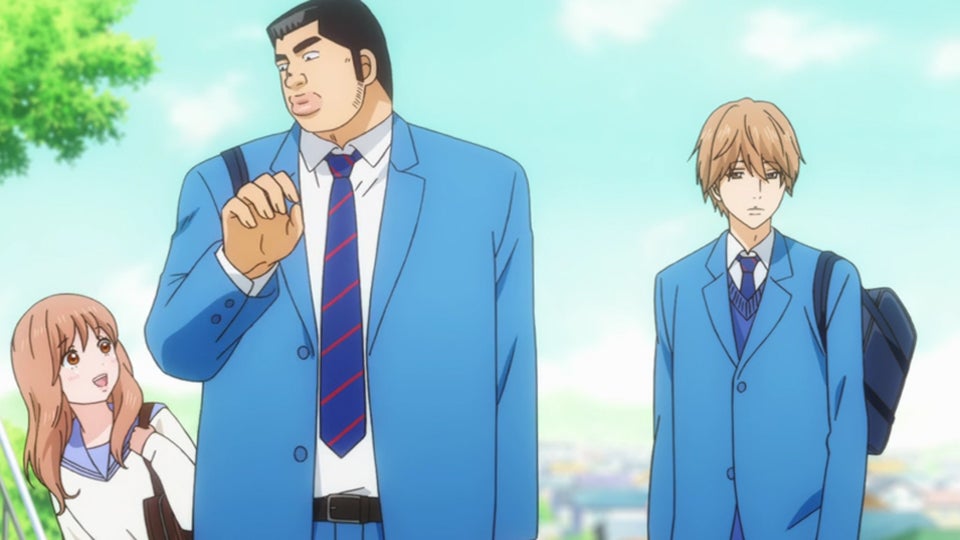 Non-Spoiler Plot Summary: Takeo is big for his age. A freshman in high school, he dwarfs even his teachers in size and is as inhumanly strong as he is thoughtful and kind. But while all the boys want to be him, the girls have never shown any interest. Instead, every girl who has ever caught Takeo's eye has instead fallen for his best friend, pretty boy Makoto.

However, after Takeo saves a girl, Rinko, from being molested on a train — and his first love story begins.

Why You Should Watch It: Most romance stories these days — and not just those in anime — focus on the "will they, won't they" type of relationship. So while two characters obviously have feelings for each other, something (often their own personal shortcomings or simple misunderstandings) keep the two apart.

My Love Story, however, bucks this trend. It is not the story of Takeo and Rinko admitting they like each other, but rather the story of their actual romantic relationship. This allows the show to focus on two teens trying to figure out how exactly a relationship works and on the problems that arise as they continue on.

This anime is also a great comedy, with gags focusing on the dichotomy of Takeo's intimidating physical appearance versus his kind, altruistic actions. It gets even funnier when Makoto and his good looks enter the mix. 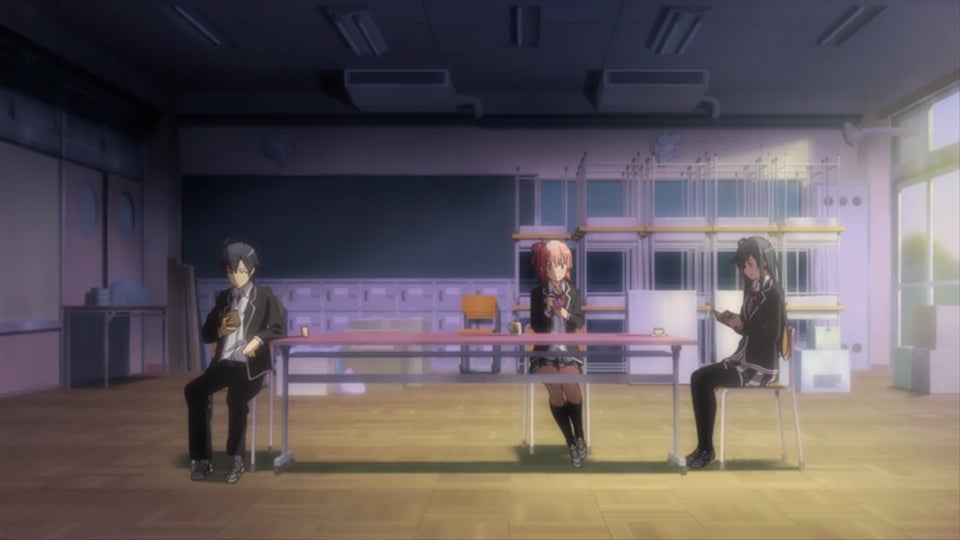 Non-Spoiler Plot Summary: My Teen Romantic Comedy SNAFU follows Hachiman, an overly cynical high school boy who is forced to join the school's service club. The club has only two other members: Yukino, a smart, beautiful, no-nonsense-type girl; and Yui, a girl obsessed with popularity but longing to be independent like Hachiman and Yukino. Together the three try to solve the problems of any who ask — often in ways you wouldn't expect, thanks to Hachiman and Yukino's disparate world views.

Why You Should Watch It: Despite having the words "Romantic Comedy" in the title, the second season of My Teen Romantic Comedy SNAFU is filled with drama when it comes down to it. On the most basic level, it is the story of a group of teens growing up and learning the difference between superficial relationships and the deeper, more permanent kind. Hachiman and Yukino, while quite different personalities, both try to live their lives with no pretense — saying exactly what they think and not sugarcoating it. But as they grow closer, it becomes harder for them to be blunt and truthful with each other. On the other end of the spectrum is Yui, who is all pretense when interacting with people outside of the club, but who has come to realise how shallow that means her friendships really are.

The anime also serves as a battlefield between hope and cynicism. Hatchiman solves problems by counting on the worst in human nature. However, while often his tactics fix the problem, the anime shows the cost that his way of thinking has not only on him but also on those around him. His opposite, Hayato, (the most popular boy in school) instead tries to inspire people to be better by always believing in the best in people. Yet, though his intentions are right and pure, often he is unable to get the results that Hachiman does.

All in all, the series is a down-to-earth look at the social development of those on the cusp of adulthood — and an experience all of us adults have had to live through. 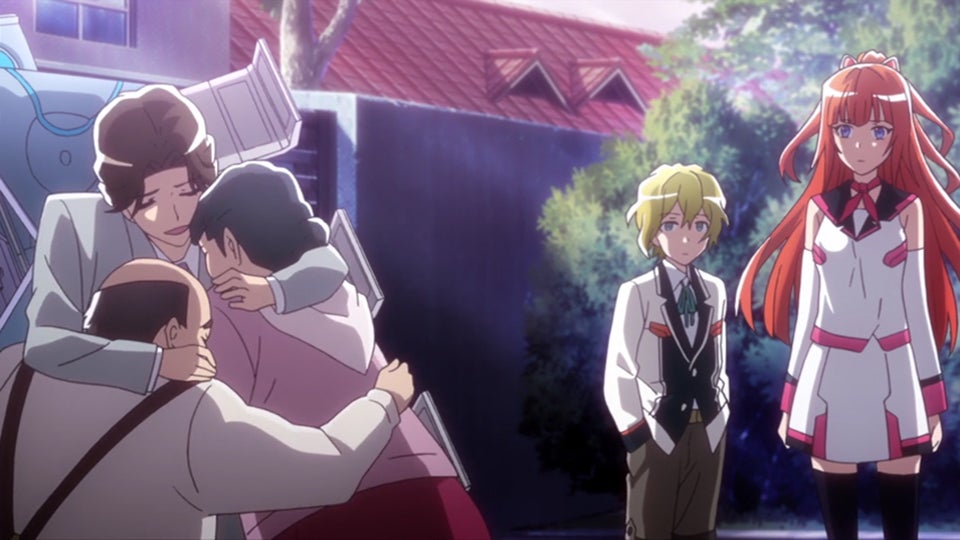 Non-Spoiler Plot Summary: In the future, Androids with human thoughts and emotions are commonplace and are largely indistinguishable from humans. Yet, there is one major difference between humans and Androids: Androids break down and lose their memories after a mere nine years.

Plastic Memories is the story of the people tasked with recovering the Androids in their final days and facilitating some sort of closure between the Androids and their human loved ones.

Why You Should Watch It: While many A.I. related stories deal with machine uprisings, Plastic Memories presents a world where A.I. life lives happily alongside us as family members, co-workers, and friends. The series delves into the various possibilities of such a world — showing us people who truly love their Androids as people and find it impossibly difficult to part with them. It also goes one step beyond, exploring what it would mean to have an Android parent or child — and the emotional pain of being the one left behind.

The main characters of Plastic Memories find themselves intruding upon the end of life story after life story. Like a doctor caring for a terminal patient, the collection team must try to remain professional even as families are torn apart. Worse still, they must convince the human families of these Androids not only to give them up but to erase their personalities — effectively killing them — as well.

It is heartbreaking — though the series does its best to provide some light and comical moments outside of the collection of sub-plots to keep everything from becoming too depressing.

Watch It If You Like: To the Moon, Blade Runner

Now that you've read my recommendations for what anime you should be watching this season, you may wonder why your favourite series is absent. That's the cruel, harsh nature of a top five list. This certainly isn't saying there aren't other enjoyable anime this season. Difficult choices have to be made! To explain further, here are four potential reasons why a particular series is M.I.A.: (1) in our opinion, it's not up to snuff (or at least not quite as good as the five above); (2) it is the second/third/fourth season of an anime — and we haven't seen the previous seasons; (3) it is an anime continuing from last season; or (4) it simply didn't cross our radar.

But if you feel I have left out an anime that's something special, feel free to give me a heads up in the comments and tell me why you feel that way.

Oh, and if you feel the need for even more anime to watch, be sure to check out the five anime of Q1 2015 you should have watched as well as our picks for the top five anime of 2014.