Descender is a comic book series where humans perform an ethnic cleansing of robots. Imagine the universe of Mass Effect, bled dry of its small amounts of hope or optimism.

Society is perfect for, oh, about four pages in this series, written by Jeff Lemire and drawn by Dustin Nguyen. You see humans gliding through life without a care. Then massive automatons called Harvesters appear in the most important colonised solar systems. And it's already too late to fight any kind of war. Organic life pretty much gets ambushed, but, somehow, they manage to survive. Non-machine lifeforms still run things in the galaxy but their infrastructure and collective will has been seriously weakened. 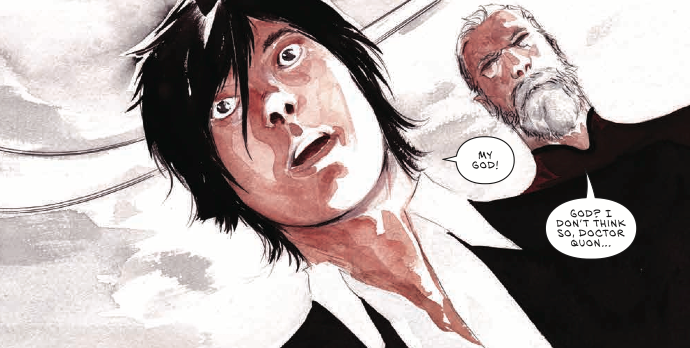 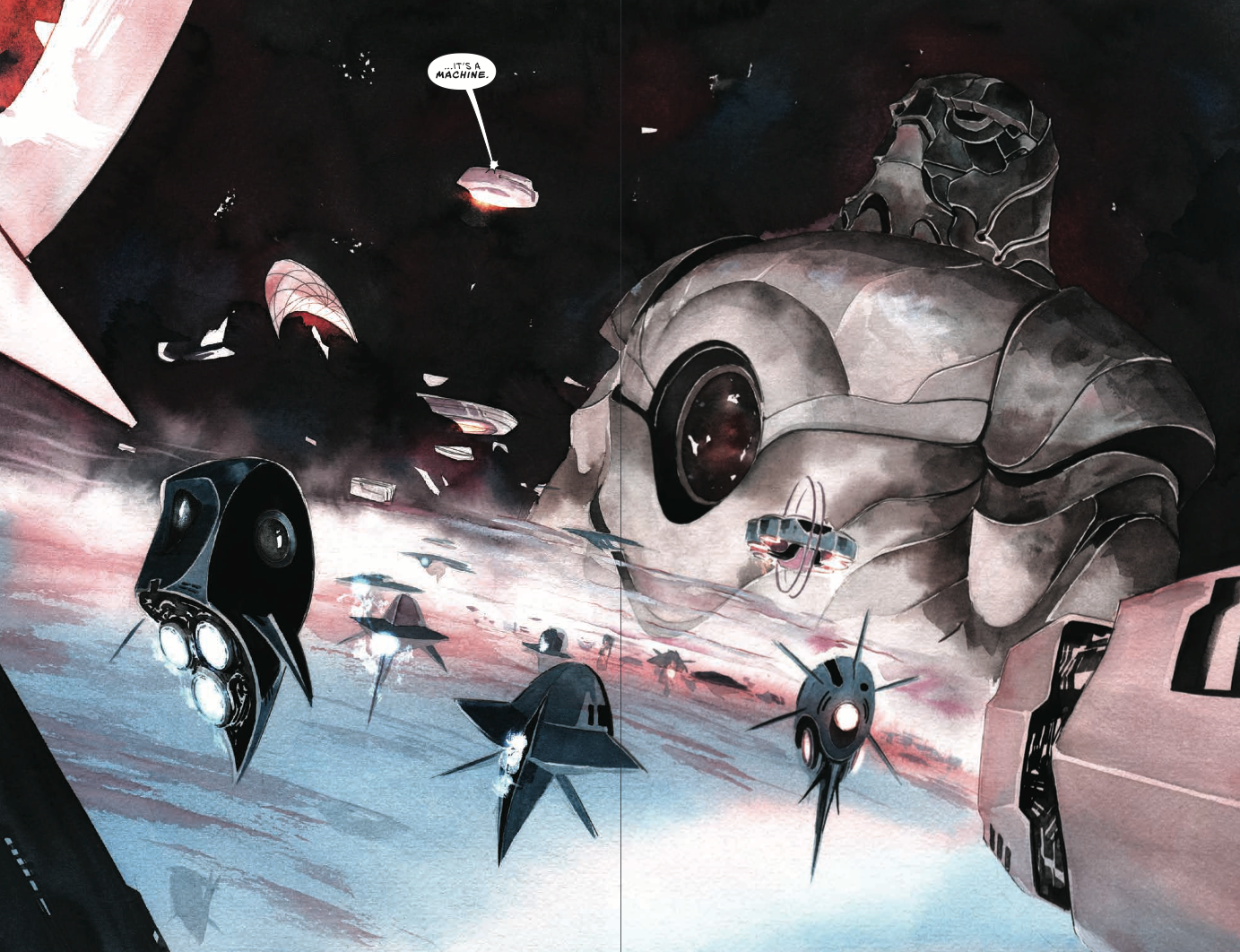 The bulk of the three issues of Descender that have been published by Image Comics so far happens 10 years after the gigantic Harvesters appeared. That flashpoint creates a depressing aftermath for both organic and machine lifeforms. Much of what's going on in Descender will feel familiar to well-travelled geeks: it's got a gloriously shiny interstellar alliance that comes under sudden attack by giant, mysterious machines. Yet, for all its similarities to Mass Effect and other sci-fi properties, Descender finds ways to hit on fresh angles on the classic set-up of human vs. robot.

Descender has the hallmarks of too many terrible conflicts throughout history: an outside agitator infiltrates and attacks a cooperative, heterogeneous society, causing its once-harmonious components to turn on each other. In Descender, the humans, aliens and robots who used to all get along hate each other now. And one little robot boy — asleep for a decade while millions of other AIs were massacred in gleeful public spectacles — might be the key to revenge or salvation. 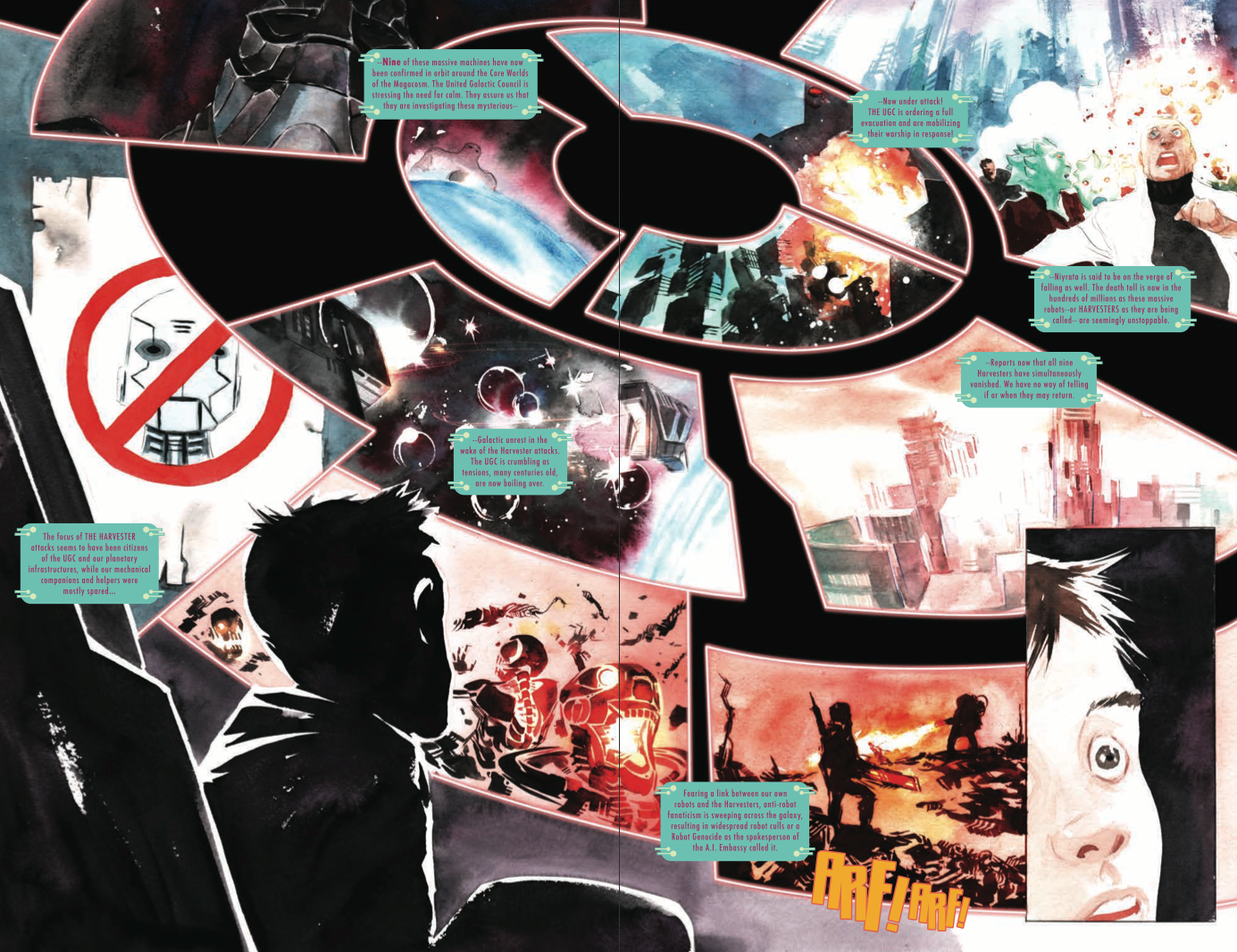 So far, the two main characters are Dr Jin Quon — a genius robot designer who worked in the United Galactic Council — and Tim-21, one of Quon's many creations. Before the Harvester event, he was rich and famous. After it, he's a broken man, press-ganged into helping the UGC's operatives track down Tim-21. It turns out that the little robot boy runs on code that might help figure out the origins of the Harvesters. 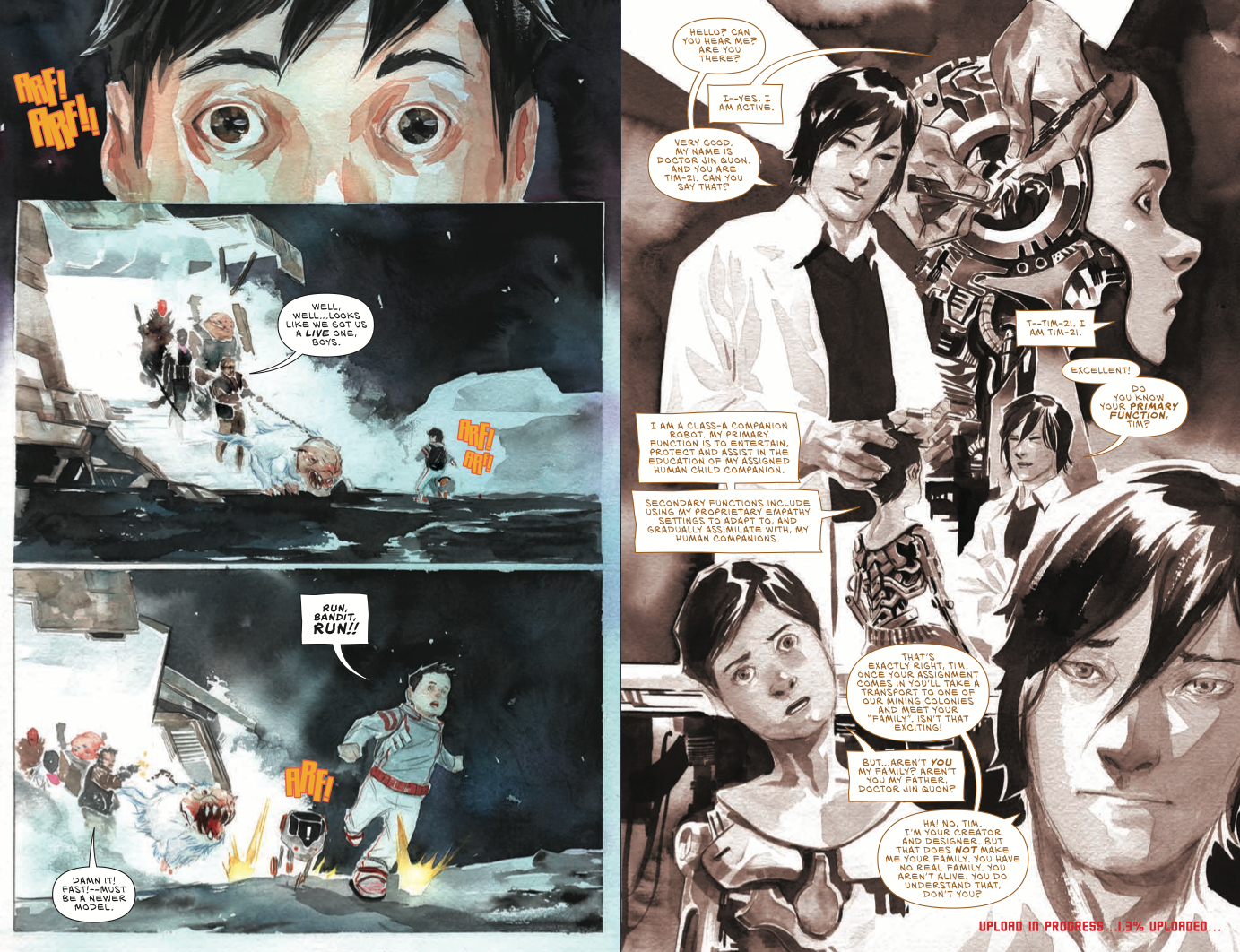 When we first see Tim, it seems like he's a flesh-and-blood person. Descender's third issue has a series of heartbreaking flashbacks where we see Tim beginning to grow into something much more human, alongside the colonist family who purchased him. 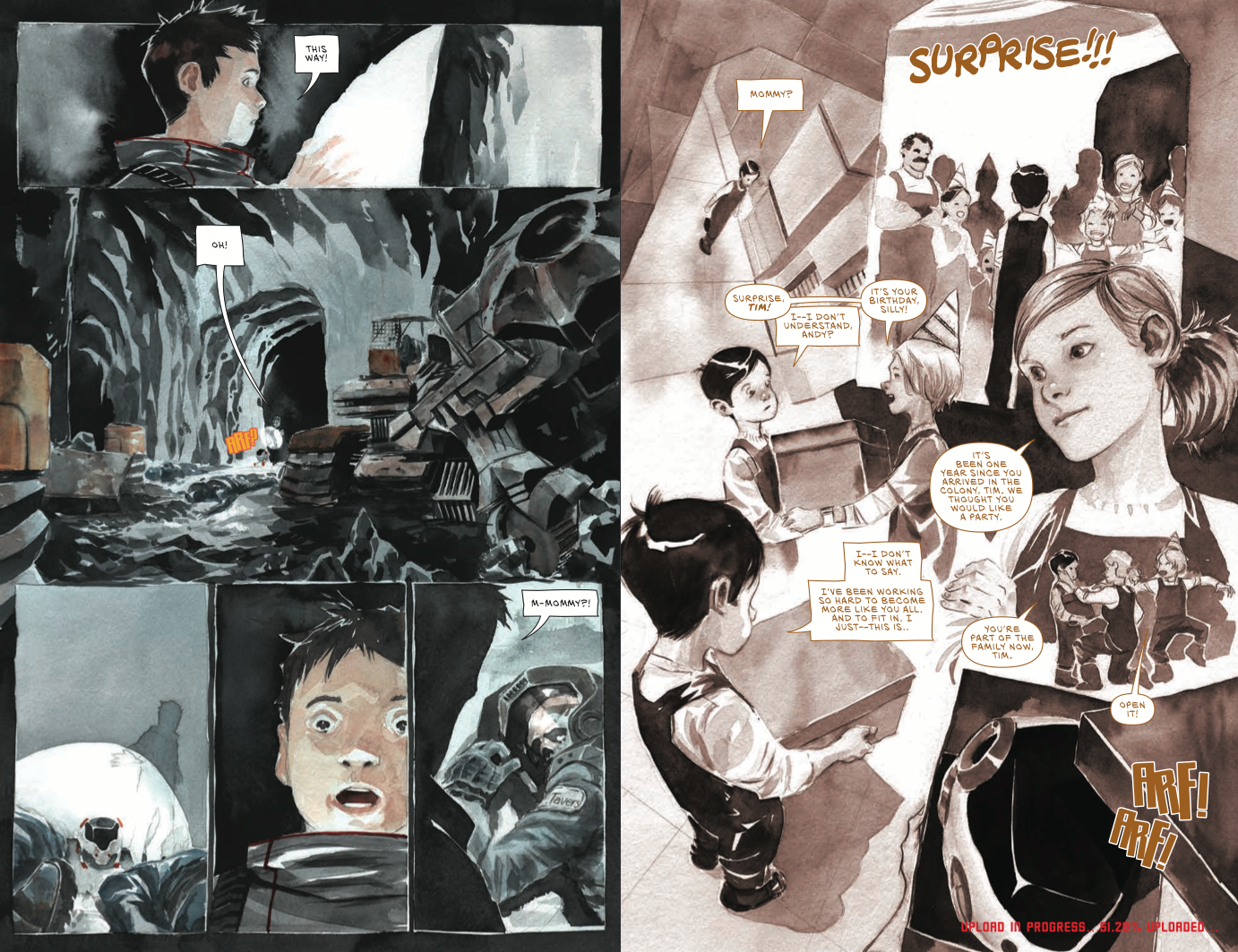 But he quickly becomes the prey of bounty hunters who chase down and kill robots for scrap. After suffering critical damage, he encounters a hivemind made up of destroyed robots, who view him as a sort of saviour figure. The weight of AI abandonment and resentment is all a bit much for the childlike AI, who's never had a reason to hate anyone. Until now.

Descender reads well because it's got loads of great world-building that doesn't feel bogged down in slow exposition. One of the best elements about Descender is how it shows the seismic change that happens after a breakdown in trust between people and the technology on which they depend. Humans seem suspicious and nastier to each other, and the machines that can think for themselves are sad and vengeful, ready to kill lest they be killed like others of their kind. 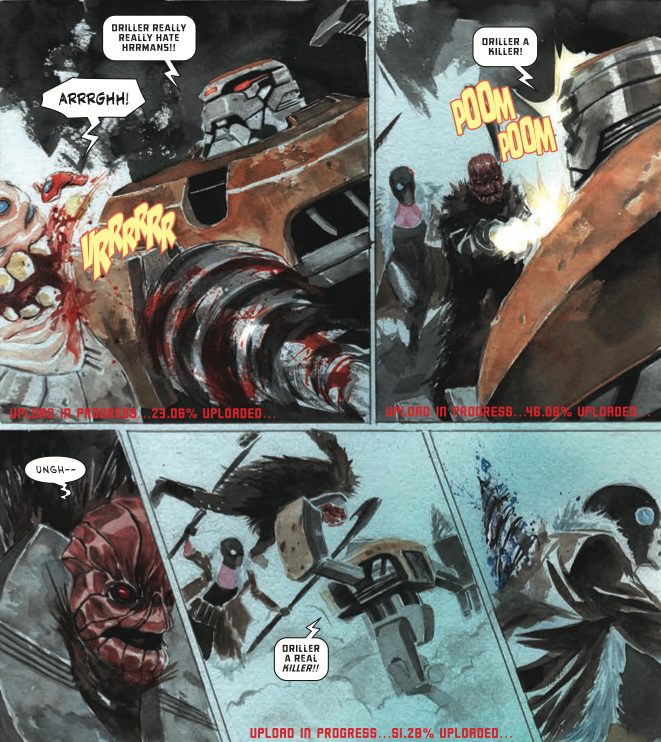 None of the emotion-tweaking ambitions in Descender would work without Nguyen's wonderful art. He draws faces and expressions exceedingly well and the soft tones of his painterly colourwork pulls the reader into the foreboding drama on each page. It already feels like you're reading the most messed-up kids' adventure ever. 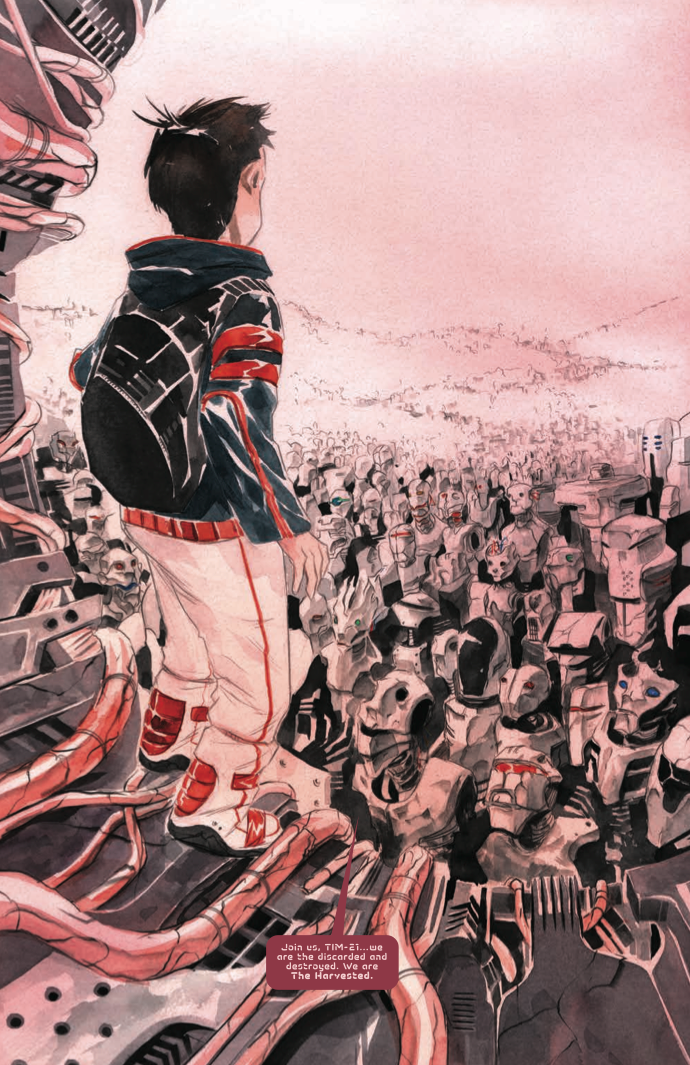 And it's just getting started. You should be reading this book.