Everything Is Weird And Awesome In The Newly Remixed Marvel Universe

A bizarre patchwork planet. A police corps made up of hundreds of Thors. A major supervillain finally getting his lifelong wish. Yep, Secret Wars is ramping up in the best way.

The goings-on in the new issue of Marvel's big crossover comics event — crafted again by Jonathan Hickman and Esad Ribic — pick up after the abrupt, "guess heroes can't win all the time" ending of last week's first chapter. Existence hasn't ended, but it has changed. We see a bunch of characters referring to a greatly-altered hodgepodge history and mapping out the rules and borders of their re-ordered world. Secret Wars #2 doesn't merely tell you what happened after everyone lost the war between the mainline Marvel Universe and its Ultimate spin-off. It shows you what happened. That's the better choice. 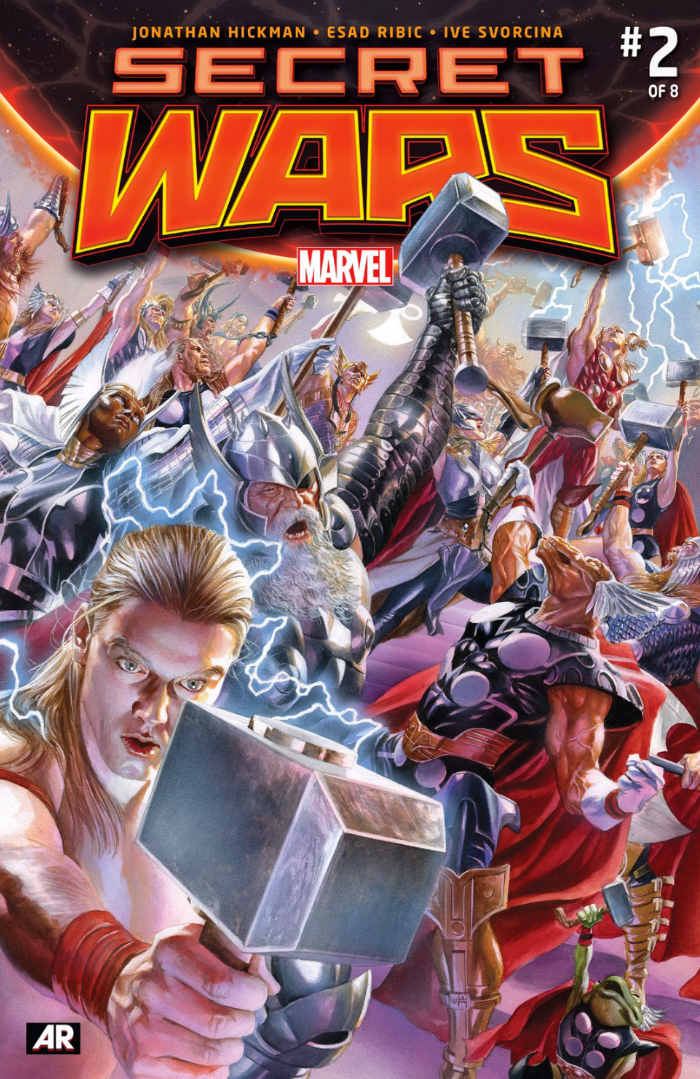 The Marvel universe has been re-mixed, and it's great. This is the good kind of alternate universe-building, stuffed with little details and big shifts that make you ask all kinds of tantalising questions. "Why is there a Galactus-shaped Sentinel looming over that castle?" "Susan Storm getting all cuddly with Doctor Doom?" "Oooh, Advanced Idea Mythologies? I want to see what they look like." This is the kind of feverish, intoxicated idea-making that makes you forgive the fact that you'll need to buy a bunch of other series to get answers. 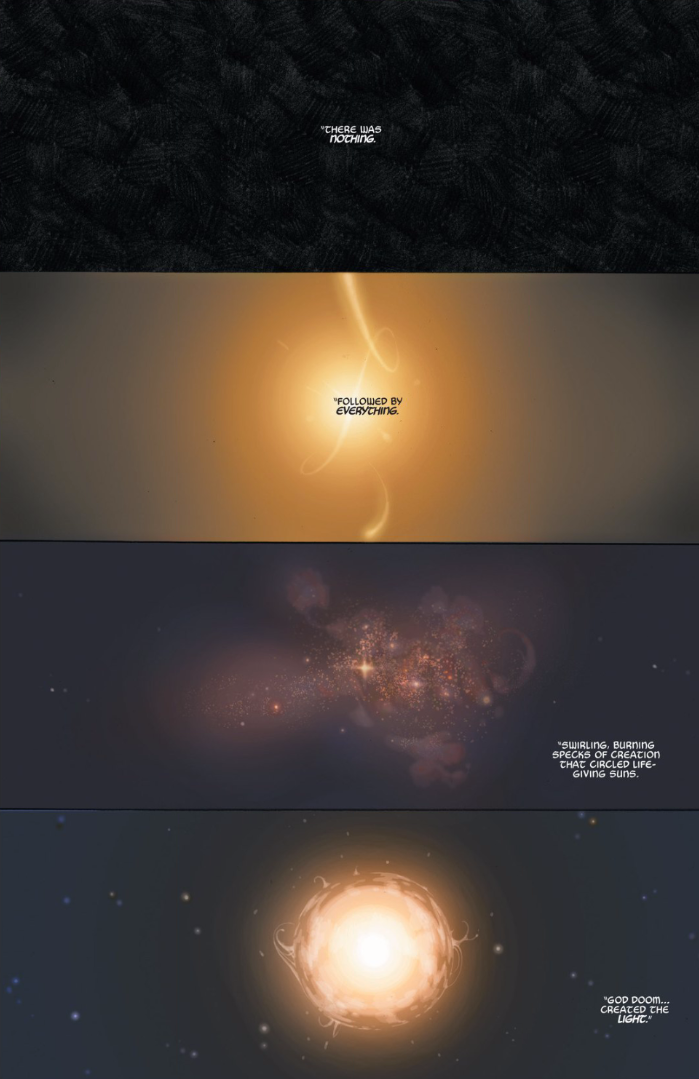 Doctor Doom is in charge of this remixed reality, and it's not just that he gets to rule the world. His claim — an ornery yet believable one — is to have created all of existence, which he rules with a mix of faith-based magic and shrouded science. 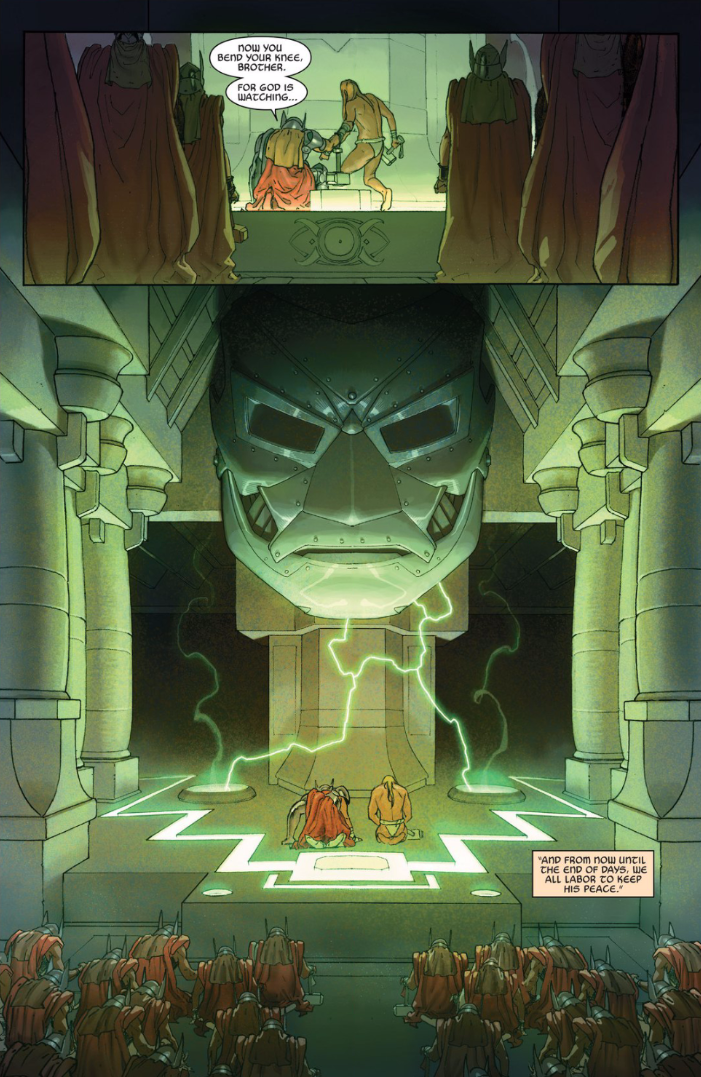 A legion of Thunder Gods are his hammer-wielding emissaries across the patchwork planet and the first sign we get of the realities that once were comes when Thanos' cosmic kill-squad murders an older, red-bearded Thor.

As he did last issue, you can see Hickman spinning looping elliptical references to the original Secret Wars event. You get a Reed Richards speculating on the nature of the ground he and his crew are walking on, but it's the evil genius Reed from the Ultimate Universe this time. The very premise of this entire chapter is a call-back to when Doctor Doom briefly held onto ultimate power snatched from the Beyonder in the 1984 Secret Wars. 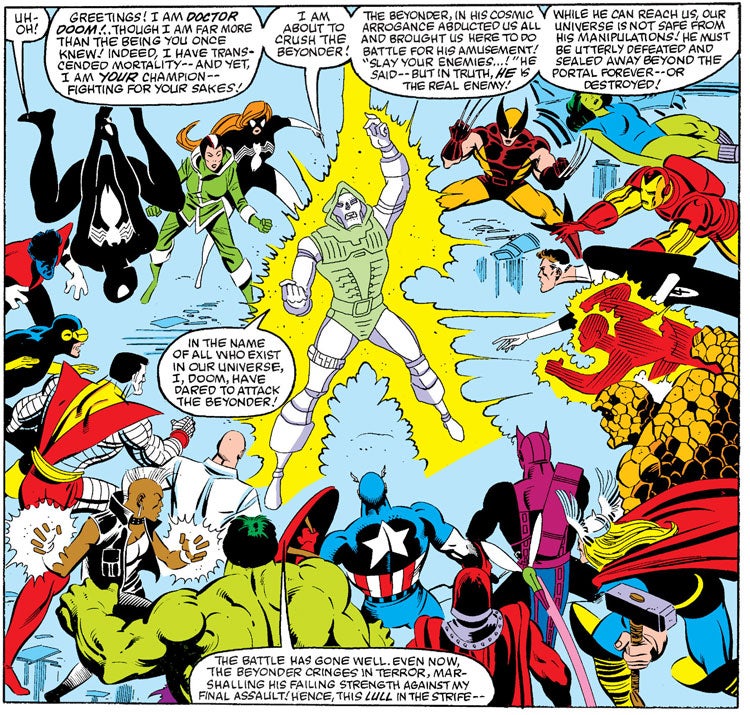 Doom's grasp was fleeting then but not here. This time, he's held onto omnipotence and re-fashioned all of reality. This is the same Doom who acted a lot like a universe-saving hero at the end of Hickman's New Avengers series. Now, true to form, we see that he's not exactly a gentle, benevolent ruler.

Hickman throws in callbacks to his older Marvel work, too, placing the older versions of the Future Foundation kids as functionaries in the Doomstadt regime. There's even a nod at his old 2010 S.H.I.E.L.D. series, if only in the similarities of each series' conceptual framework. 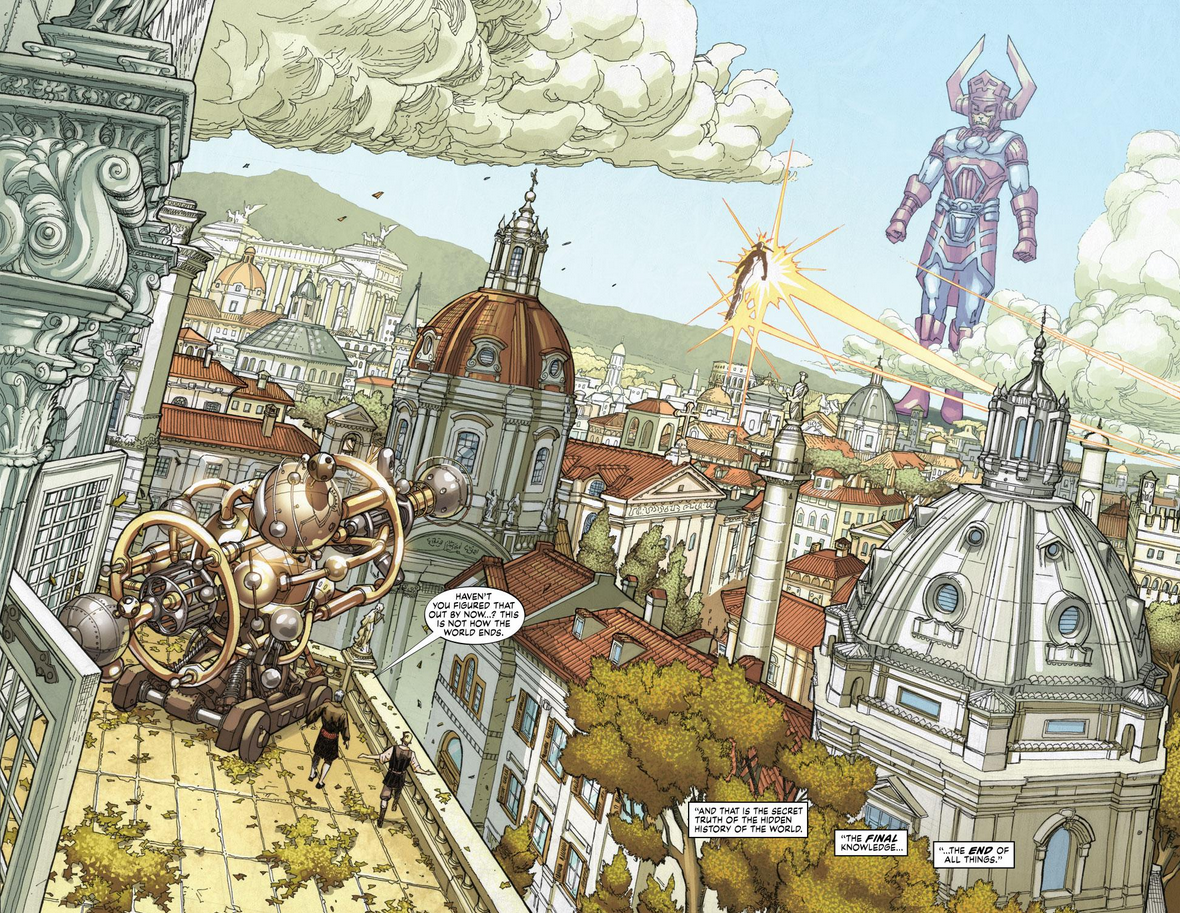 In a day and age where fictional realities get fractured, compressed and folded out with boring regularity, this issue of Secret Wars is a blessing. It's a nice contrast to the dreary time-filling mash-up of past realities that DC has been publishing the last several weeks. From Marvel, we get a sign that longtime fans will be getting crazy remixes of the characters they have followed for so long before a new status quo settles in. Let's hope the experimentation gets even more heated.