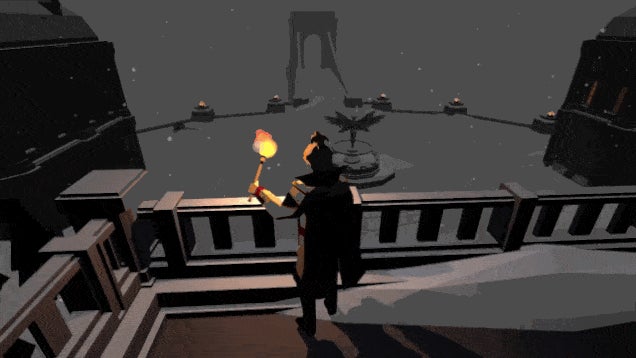 Should I care about Malebolgia? I wish I could say yes. It's a Dark Souls-alike with its own intriguing world and atmosphere, but it feels awful to play and treats the player like garbage.

What's it about? I was gonna put its Steam description here, but its a monster-sized hairball of untanglable lore. Basically though, it's a Dark Souls-esque game (read: methodical fights against bastard-hard monsters) with a layer of old-school horror on top. Also, it's cel-shaded, which means it will live foreverrrrrrrr. Or at least, it will age better than Hyper-Realistic Man Tickler IV: Postmodern Warfare.

You can watch me play a bit of it here (or here):

Why is (or isn't it) cool? Based on the few hours I've played, the story seems interesting (loosely rooted in Dante's Inferno), but combat is floaty and unsatisfying, environments quickly grow repetitive, and the save system is hella frustrating. In a game that's pretty much all about combat, that first thing is a deal-breaker. There's no weight or heft to strikes, moving is slow and awkward, and you can only dodge forward and backward. The save system, meanwhile, is distinctly old-school, often requiring you to do entire boss fights over again if you happen to get killed after beating them. When that started happening, I clenched my fists so hard that my fingers nearly came out the back of my hands.

Dang. Is there anything salvageable about it? Um, it looks kinda nice sometimes. The boss designs are pretty cool. The world has a distinctly creepy, mysterious allure to it. Also, the combat isn't, like, broken. It's just not very good.

Should I buy it (even though there are a million-billion other Steam games I could spend my money on)? No. Even if you have a massive hankering for another Souls-esque game, there are plenty more either out (see: Titan Souls, though it's similar philosophically more than it is in terms of gameplay) or around the corner.