Pillars Of Eternity: The Kotaku Review 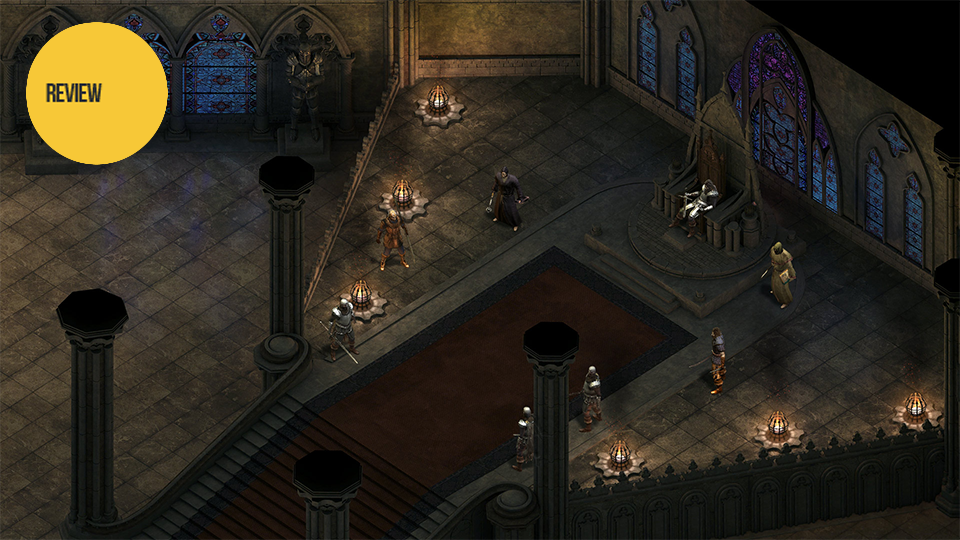 I once heard a game designer say that anyone older than a teenager who plays video games isn't actually enjoying them. Instead, the designer theorised, we're all just endlessly trying to recreate the enjoyment we used to feel, years ago, back when we were young and the world was full of possibility.

Can't say I buy that viewpoint, but it certainly came to mind more than a few times as I played through Pillars of Eternity, a role-playing game released last month by the developer Obsidian Entertainment. Pillars is excellent, yes, and a blast to play — but is it fun because it's a well-designed game that gives players lots of interesting choices, or because it reminds me of the days when I'd spend entire weekends locked in a bedroom with nothing but a computer and RPGs like Baldur's Gate and Planescape: Torment?

Some 30 hours later, I think the answer is just "Yes." Pillars of Eternity is a top-notch video game. It might not resonate as much with people who haven't played the classic games that inspired it, but it's so entertaining and well-constructed that it manages to be appealing even without taking nostalgia into account.

Of course, Pillars of Eternity wouldn't exist without nostalgia. Obsidian's newest RPG was built off $US4 million the studio earned three years ago by promising a spiritual successor to all those beloved Infinity Engine games. Something like 74,000 people, surely fuelled by their memories of old-school computer RPGs, pledged various amounts of money so that this game could happen.

It is with that baggage that Pillars attempts to find balance between old and new, tickling people's memories of 1998 while adding the innovative tools and enhancements you might expect from a video game in 2015. Here's an example: those classic RPGs had a "rest" feature, which was a cheat button of sorts. By resting, you could restore your party's health and magic an unlimited number of times, so long as you were outside of combat. Pillars brings back this feature but adds a twist: each snooze requires you to use camping supplies, a limited resource that the game will cap based on your difficulty setting. It's a smart way to reuse old design ideas without just straight-up copying them.

If you're not familiar with the Infinity Engine games that Pillars of Eternity is emulating, you should know that they're isometric party-based role-playing games with a heavy emphasis on questing and narrative. They're designed to give players a lot of interesting, nuanced choices, and they look like this: 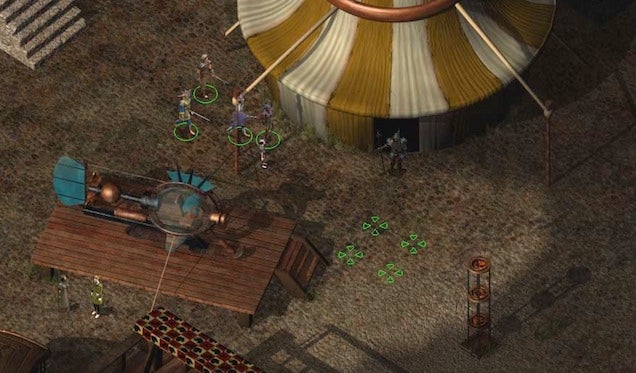 Pillars of Eternity, on the other hand, looks like this: 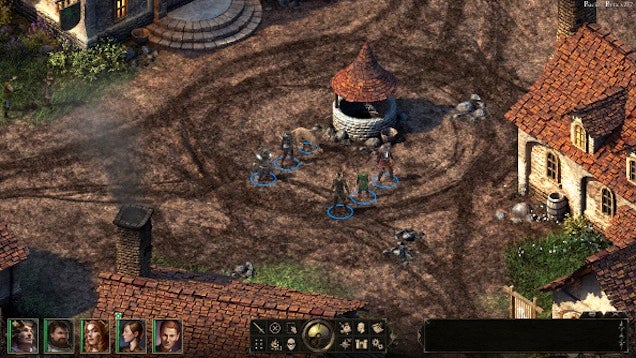 It might seem risky to shape a game around conventions designed two decades ago, but as it turns out, isometric RPGs really do hold up in 2015, especially when they're designed with such evident talent and meticulous skill. The art design is beautiful, often enhanced by the fixed perspective, which rarely feels restrictive. In fact, the fixed camera creates a kind of intrigue you'd never feel in games that let you peek through every abandoned alley. What's behind that building? What's under that big staircase? In Pillars of Eternity, YOU'LL NEVER KNOW.

The premise of Pillars is this: you, an adventurer whose class, race, and appearance have been meticulously chosen after roughly 230492342042085 hours you just spent in the character creator, have wound up stranded in a nation called Dyrwood. As you explore and quest your way through this new world, you learn that Dyrwood's having a baby problem: Their children just keep popping out without souls. And because this is a video game, you're the only one who can figure out the problem and how to fix it. Cue adventure.

"Adventure" in a game like Pillars of Eternity means carefully scouring the world from isometric map to isometric map, hunting for new quests to complete, characters to meet, and foliage to pick. There's a main story to lightly nudge you along one specific route, but really, you the player can decide exactly how to get things done both on a macro and micro level. That could mean picking the order of locations you visit or it could mean choosing whether to stealth through a dangerous encounter or just brute-force it. Hope you like making decisions.

If you're willing to buy in — and you're willing to memorise a ton of bizarre nouns like "animancer" and "Glanfathan" — Dyrwood and its neighbouring areas have a ton to offer, particularly once you get to the game's biggest city. Called Defiance Bay, it's a sprawling burg so big it's divided into five main maps, each with its own people to chat with and buildings to rob. There are also bear caves, waterfalls, dragon nests, underground murder shrines, and all sorts of other rad places to find and explore. It's a familiar, wonderful feeling: You arrive in a new area and start clicking on everything you can.

Playing Pillars of Eternity is sort of like jumping inside of a fantasy novel — not some hacky Tolkien clone but a good fantasy novel, like Game of Thrones or The Lies of Locke Lamora — and making your own decisions about how the story proceeds. By nature, this is a game that could only really have succeeded with good writing, so it's a good thing Obsidian's got some of the best writers in the business. The story is surprising and intricate; the characters are all flawed and fascinating; and the dialogue is wonderful, enhanced by blurbs of description that add an unusual level of nuance.

The voice acting seems to trigger sporadically — sometimes, half a conversation is voiced and the other half is silent — but when it's there, it's great. Also great: Dyrwood is full of special non-player-characters — named and designed by Kickstarter backers — whose lives you can read about in the form of short stories that are almost always fun (and often surprisingly dark). You can't have conversations with any of these NPCs, sadly, but their backstories are great.

Whereas old D&D games forced you to upgrade your gear constantly — who didn't love those liches that could only be hit with +4 weapons or higher? — in Pillars, weapons and armour are kind of an afterthought, perhaps because they're drowned out by the game's many elaborate (and sometimes confusing) stat mechanics. There are very few — if any — unique and memorable weapons or armour pieces in the world of Dyrwood, and by the end of the game I was fairly surprised to find that I didn't actually need to sub out my companions' gear. It would have been nice to see some meaningful treasure.

(Maybe the real treasure is that it's 2015 and we're still getting isometric classic RPGs, am I right? No? Yes? Anyone? ...OK then.)

There are sections of Pillars of Eternity that appear to have been victims of resource restrictions and time constraints. The second major city, Twin Elms, isn't nearly as interesting or as well-constructed as Defiance Bay, and the pacing gets a little funky towards the end. After many hours of languid exploring, I unexpectedly found myself at the end of the story, wondering how I was already at the end of the story. Other components of the game — like the stronghold and the crafting system — feel like they could be fantastic if they just gave you more choices to make and things to accomplish. Once you unlock the stronghold, for example, the game tasks you with building new upgrades and hiring mercenaries to defend your keep, but it never quite gives you incentive to care.

On a scale between, say, Icewind Dale 1 and Baldur's Gate II, Pillars of Eternity falls somewhere smack in the middle. Put another way: this is a great RPG, and it's one worth your time, even if you don't know what a Bhaalspawn is.

Forget that one designer and his cockamamie claims about how games can only recreate childhood joy. Pillars of Eternity is capable of evoking so much more than nostalgia. Maybe it will get you to care about the fates of its fictional characters, like the enigmatically insane Durance and the chill-yet-tormented Edér. Maybe it will get you to stop and ogle at some of gorgeous art you'll find throughout Dyrwood and neighbouring regions. Maybe it will get you thinking about some of the themes it explores — death, purpose, faith — and challenge your viewpoints in interesting ways.

And maybe — probably! — it will convince you that even in 2015, games that look and play like this can be as wonderful as they ever were.