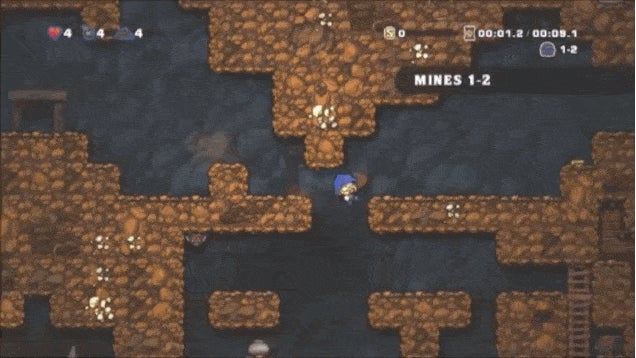 I've played more than 100 hours of Spelunky. Olmec? No problem. Yama? Done. Speedlunky? Did it on PC and Vita. But that didn't stop this world record run from making me feel terrible.

Spelunky God, which is an entirely appropriate name for this speedrunner, beats Olmec in one minute and 47 seconds. Speedlunky, considered a reasonably hard achievement, asks the player to beat the game in less than eight minutes. Spelunky God's doing it in a fraction of the time.

Even if you've never played Spelunky before, this run looks seriously impressive.

He's pulling this off using the teleporter, a high risk item that most players actively avoid because, more often than not, it leads to death. The teleporter allows players to skip through chunks of the level, and while there's a science to how it works, you need to internalise its design enough to be pulling it off within a game that has randomised elements to it. Oof!

Spelunky isn't entirely random, which is why the teleporter can be useful for speedrunning. It's possible to recognise repeating elements in the geometry, the pieces Spelunky puts together to generate its semi-random levels, and know whether you can safely bounce from place to place.

It's why I can reasonably say this world record will eventually be broken, since he makes a couple of mistakes along the way, and loses precious seconds. Of course, since Spelunky God can't achieve the world record by running through the same map again, he'll have to keep playing until another fortuitous set of level elements are placed in his lap. But it will happen.