The Scary Theory That Totoro Is The God Of Death 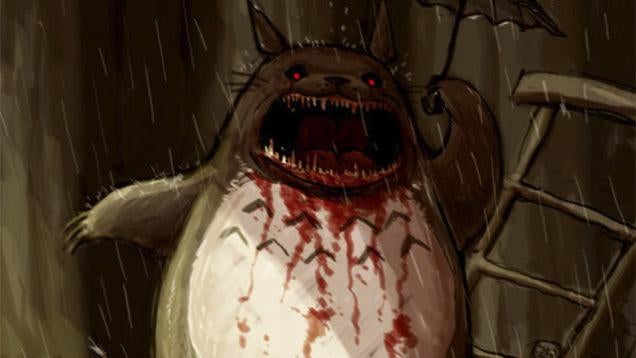 My Neighbor Totoro is a family favourite. Kids and adults alike love the story of two sisters in the idyllic Japanese countryside with magical creatures. But for some viewers, there's darkness seething underneath. Totoro is no cuddly critter. He is a killer.

The reading of Totoro as the God of Death expounds on the movie's climax — a climax that has always struck me as odd for various reasons. Here is the theory, courtesy of website cherrypistoru's (via website fellowof)

The rumour says that Totoro is the God of Death, so the persons that can see Totoro are actually close to death, or already dead. What that means for the story is that when Mei goes missing and a sandal is found in the pond, Mei actually drowned. When Satsuki is asked about the sandal she cannot face the truth and lies about it not being Mei's sandal. So Satsuki goes on a desperate search for Totoro, calling for him and actually opens up the door the realm of the dead herself. With Totoro's help she finds her dead sister and they together go to their mother's hospital. There, the only one who actually noticed that the sisters were there, was the mother, who also soon is going to die.

And in the ending scene, Satsuki and Mei don't have any shadows some says.

This theory doesn't stop there. There's a famous murder case called The Sayama Incident (My Neighbor Totoro takes place in Sayama Hills) in which two sisters turned up dead. The story goes that one of the girls said she saw a cat apparition before committing suicide. According to Japanese site Flow Management, this, however, was an urban legend. Most likely, it was attached to the Totoro is a God of Death rumour so that it would sound more believable.

While that connection is not exactly correct, the Sayama Incident did happen in May, and both of the sisters in Totoro are actually named "May": "Satsuki" means "May" in Japanese, and "Mei" is the Japanese pronunciation for "May".

In Japanese, there are also the "May blues" (五月病 or gogatsubyou) and typically affects new students and new employees, because the school and the work year both begin in April. This sort of depression is found in people having trouble adjusting to new surroundings. In My Neighbor Totoro, the family has moved to a new area. This can be spun out further as a more general reference to depression.

The Totoro as the God of Death theory isn't new — but it's a theory that will not die. Since it continues to attract attraction and discussion online, Japanese site Byoukan Sunday pointed out that Studio Ghibli, the studio that created Totoro, already struck down these theories a few years back.

"Everyone, do not worry," read the Studio Ghibli statement. "There's absolutely no truth or configuration that Totoro is the God of Death or that Mei is dead in My Neighbor Totoro."

Continuing, Studio Ghibli addressed the issue regarding the lack of shadow surrounding both Satsuki and Mei in the film's ending. This was because, according to Studio Ghibli, the film's animators decided that shadows were not necessary in this scene. "We really don't want people to believe this rumour," the studio added.

Art is not finished when the artist says it is. Art must be viewed and interpreted by an audience. Sometimes it's correctly interpreted and sometimes it's not — that's for the audience to decide.

This rumour, correct or incorrect, provides an interesting subtext to My Neighbor Totoro. It gives an extra layer of audience interpretation. While some of the facts might be wrong (especially regarding The Sayama Incident), the Totoro as a God of Death subtext does open up the movie to further discussion — discussion that Studio Ghibli does not want and has tried to stamp out. Yet, the theory lives on.