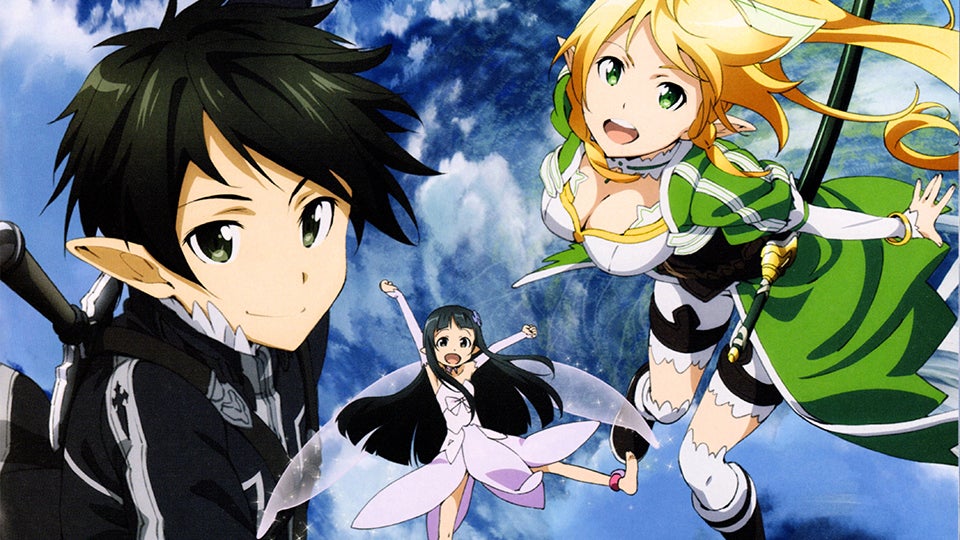 Love it or hate it, there is no avoiding the fact that Sword Art Online is one of the most popular anime of the past few years. However, before you jump into the newest game tie-in, Sword Art Online: Lost Song, there's more than a bit of lore to get caught up on first.

To help me out with this today, I am joined by the disembodied voice that seems to haunt Kotaku authors whenever we decide to write an article like this.

"This article contains massive spoilers of the first three arcs of Sword Art Online and the first two games."

Yes — and I see you have been peaking at my notes. I was about to mention that. However, for the newest game, there will be no spoilers beyond the most basic set up, so readers will be safe on that count. 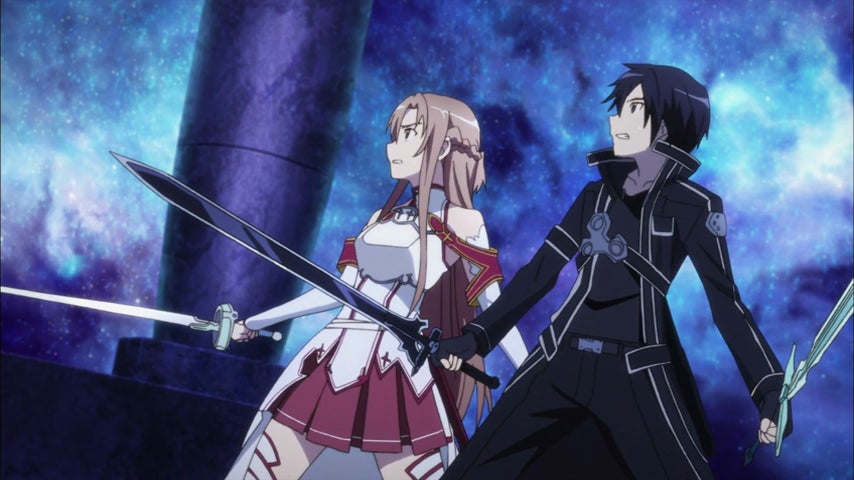 Well, feel free to spoil away. I know nothing about Sword Art Online.

No problem! Sword Art Online is a best-selling Japanese novel series that has been adapted into several manga and two popular anime series. The first arc of the story follows a group of 10,000 people trapped in a virtual reality MMORPG — the titular Sword Art Online. The only way to get out is to beat the boss on the world's 100th floor. The twist is that if you die in the game, you die in real life.

Oh, so it's a "death game" kind of story. Is that why people like it?

Well, a big part of why it's so enjoyable is that the series uses its protagonist, a player by the name of Kirito, to explore both the social and psychological implications of being trapped in a game for several years.

It also has high-stakes sword-fighting action and a pretty darn good love story with a strong female character, Asuna, to boot. 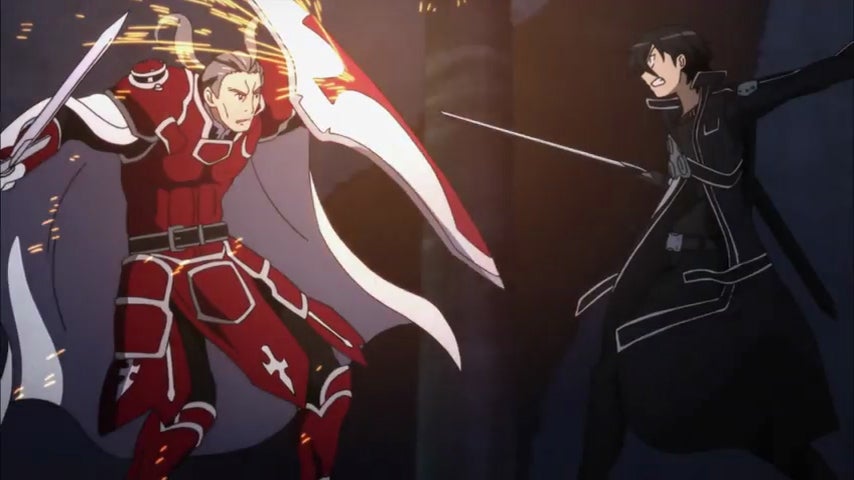 Well? What happens? Do they reach the 100th floor, beat the boss, and escape?

Not exactly. After defeating the boss on the 75th floor, Kirito figures out that his guild master is actually Akihiko Kayaba, the creator of Sword Art Online — and the one responsible for trapping them all in the game. However, instead of fleeing, Kayaba decides to reward Kirito for figuring out his secret identity by agreeing to a one-on-one final boss fight right then and there.

Oh, so Kirito wins and everyone returns to the real world?

Actually, no. Kirito loses and is then killed. However, despite this, Kirito is somehow able to keep himself in the game despite being at zero HP — something so surprising it allows him to finish off Kayaba and end Sword Art Online. 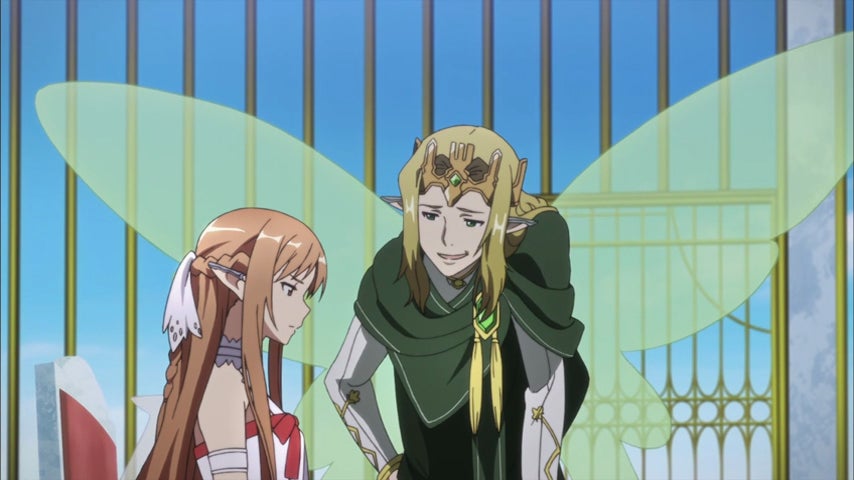 And then it's "happily ever after?"

Not by a long shot. The second story arc deals with the fact that 300 people, including Asuna, don't wake up after the end of Sword Art Online. Instead, they are being held captive and experimented on in another (supposedly safe) VRMMORPG, ALfheim Online by Asuna's real world fiancé, Nobuyuki Sugou.

Thus Kirito must enter this Norse fairy-themed MMO and rescue her and the other captives. Along the way, he meets and teams up with Leafa, his real world sister — though neither of the two knows the other's true identity.

At the end, after defeating Sugou, Kirito once again meets Kayaba and receives "The Seed" — the game engine SAO and ALO are built on — which Kirito then releases on the net so that everyone can make their own VRMMORPGs.

Whether it is or not is yet to be seen. However, the arc that follows is a murder mystery where someone in Seed-based FPS VR game Gun Gale Online is shooting people in game and that in turn seems to be killing said people in real life. Kirito is hired to go into this game and figure out what is really going on. He is mentored in the game by Sinon, a girl suffering from severe PTSD who is able to overcome her trauma while in the game world — though not in real life.

There are several additional story arcs, but this far in should do for our purposes.

Alright, I think I have a basic handle on things. Tell me about the games.

OK, so do the games just have you play the anime/novel plot or are they side stories or what?

Actually, they are neither. All three are games set in an alternate universe and share their own continuity.

Infinity Moment begins at the climax of Sword Art Online's first arc — the one-on-one fight between Kirito and Kayaba. However, at the moment where Kayaba should beat Kirito like he does in the books/manga/anime, a glitch in the game occurs allowing Kirito to land a killing blow instead. Moreover, the players' entrapment in Sword Art Online does not end with Kayaba's death. Thus, Kirito, Asuna, and the other survivors have no choice but to push on through the game's remaining 25 floors and hope that will free them from SAO. 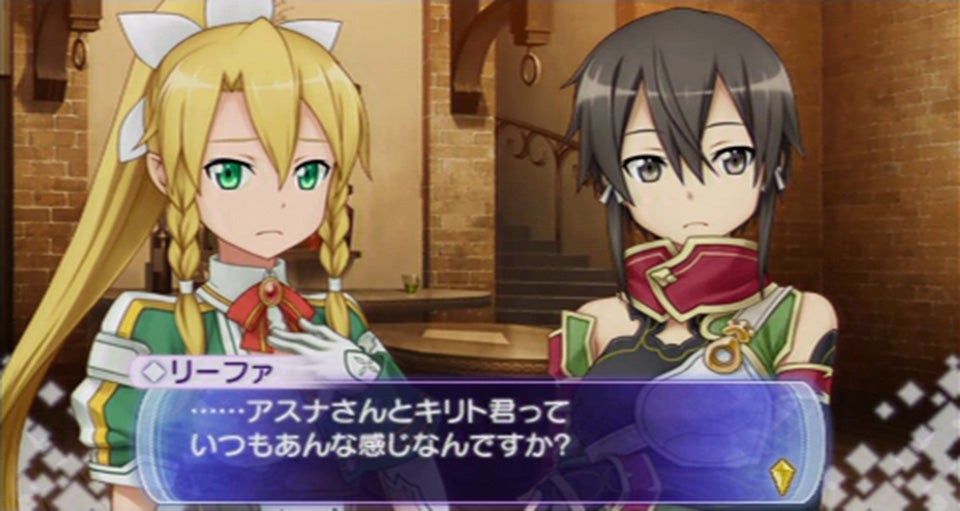 Hold up. So Infinity Moment becomes a completely different story from that point?

Not quite. People and events from those subsequent arcs of the books/manga/anime begin bleeding into the world of Infinity Moment. Both Leafa and Sinon (ALfhiem Online and Gun Gale Online, respectively) end up in Sword Art Online and likewise build relationships with Kirito that mirror the ones they had in their original storylines.

Moreover, second arc bad guy Sugou decides to enter the game himself via a hacked character and begins his experiments in SAO instead of ALO — making him one of the main villains in Infinity Moment. 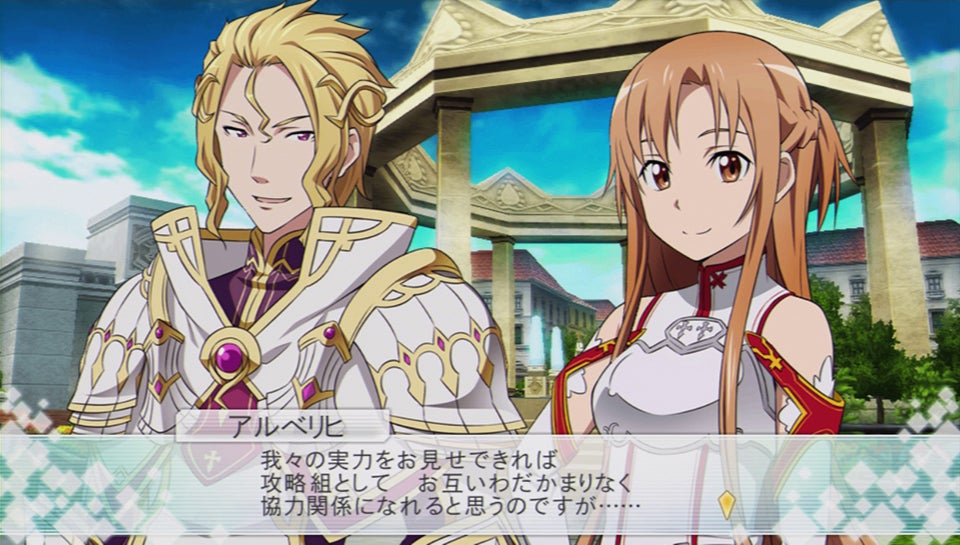 Alright, so what happens then?

Well, as they continue their years-long quest to escape, Kirito and the others begin to unravel the mystery of what exactly the continuing glitches are and, more importantly, how they are linked to Strea, a mysterious warrior suffering from chronic headaches.

In the end, Kirito, Asuna and the others do escape, but months after they would have in the original timeline.

Still, that basically changes everything to come after.

Yep. The consequences to the overall story are pretty major. The ALfheim Online arc never happens at all. Without that, Kirito doesn't get the Seed and subsequently spread it over the net — meaning that Gun Gale Online doesn't come into existence either. 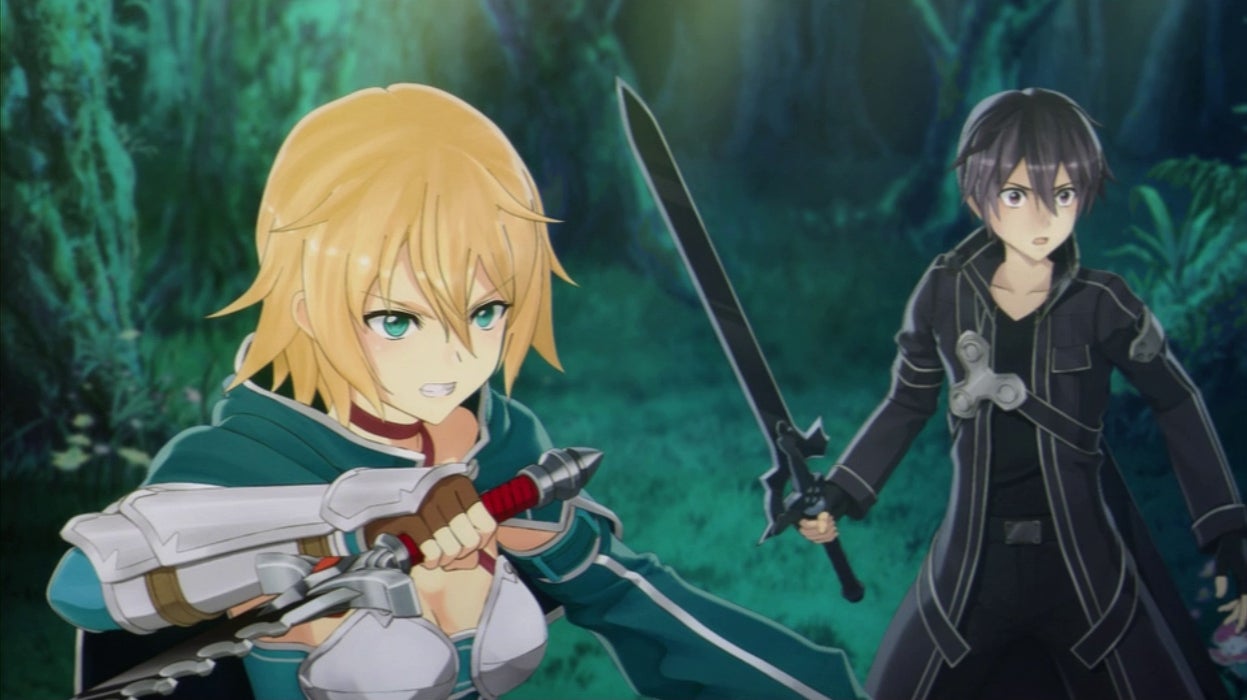 Wow, so what happens in Hollow Fragment?

Hollow Fragment is actually a remaster of Infinity Moment for the Vita. As far as the general plot goes, it tells the same story, though with various events happening a bit sooner or later than they did on the PSP.

However, in addition to a massively revamped combat system, Hollow Fragment contains a whole new side story world called the Hollow Area. Kirito subsequently teams up with Philia, a PKer (i.e., a murderer as it is a death game) trapped in the Hollow Area, and explores the massive area — occasionally encountering ghosts of both monsters he's defeated and people long since dead. 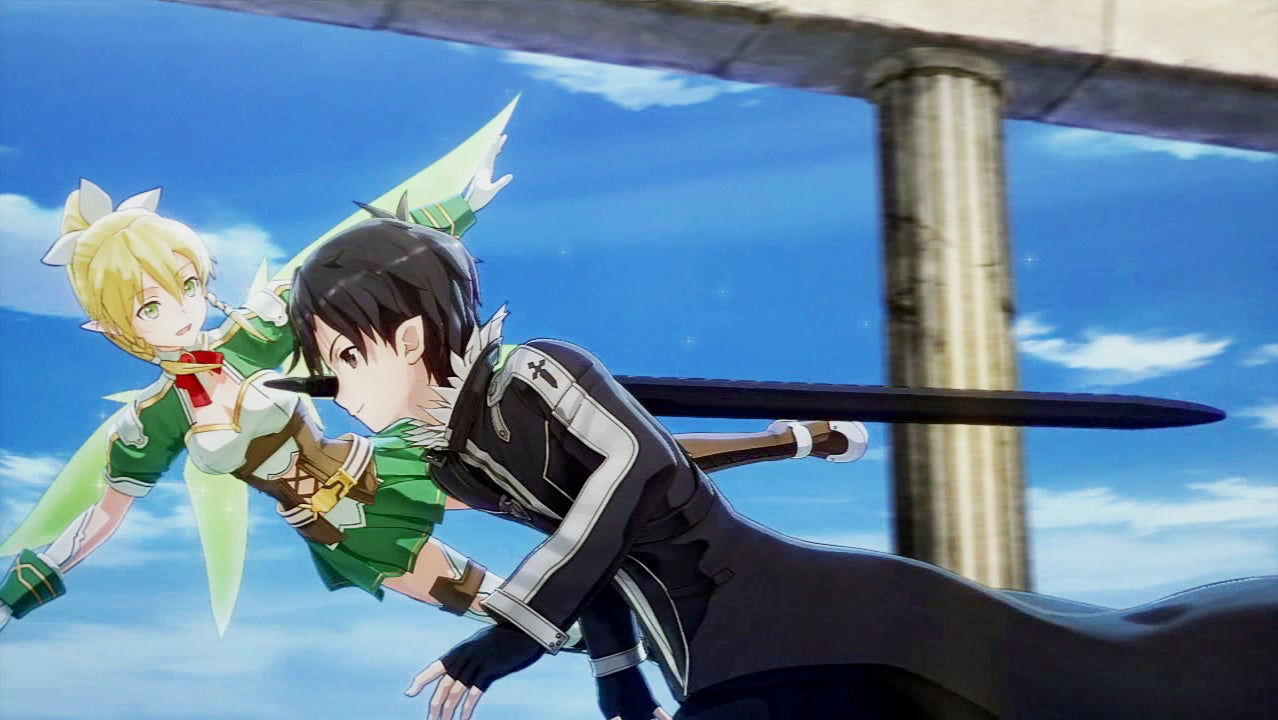 What about the newest game? It's not a remake, too, is it?

Not at all. Lost Song is a true sequel to the previous games. Set somewhere around the time the Gun Gale arc would be happening in the books and anime, Lost Song follows Kirito and his friends from Sword Art Online as they play ALfheim Online — though quite a different version from the one in the original storyline. Without the scandal caused by Sugou's human experimentation, ALO is the most popular game in the world and Lost Song begins just as ALO's first expansion goes live.

Kirito and his friends are simply eager to explore this new game reality free from the life and death stakes of SAO. However, a new guild led by pop-idol/MIT graduate Sharvin "Seven" Nanairo is gaining in popularity, setting the stage for Kirito et al.'s newest adventure.

Is that all you're going to say about this one?

For now, though you can check out the game's first few hours here. I'll have more to say on it over the coming weeks as I work my way through it.

And as the PS3 and Vita are region free, I should also mention that the Asian version (Singapore, Hong Kong, etc.) of Lost Song is available with English subtitles should importers be interested. 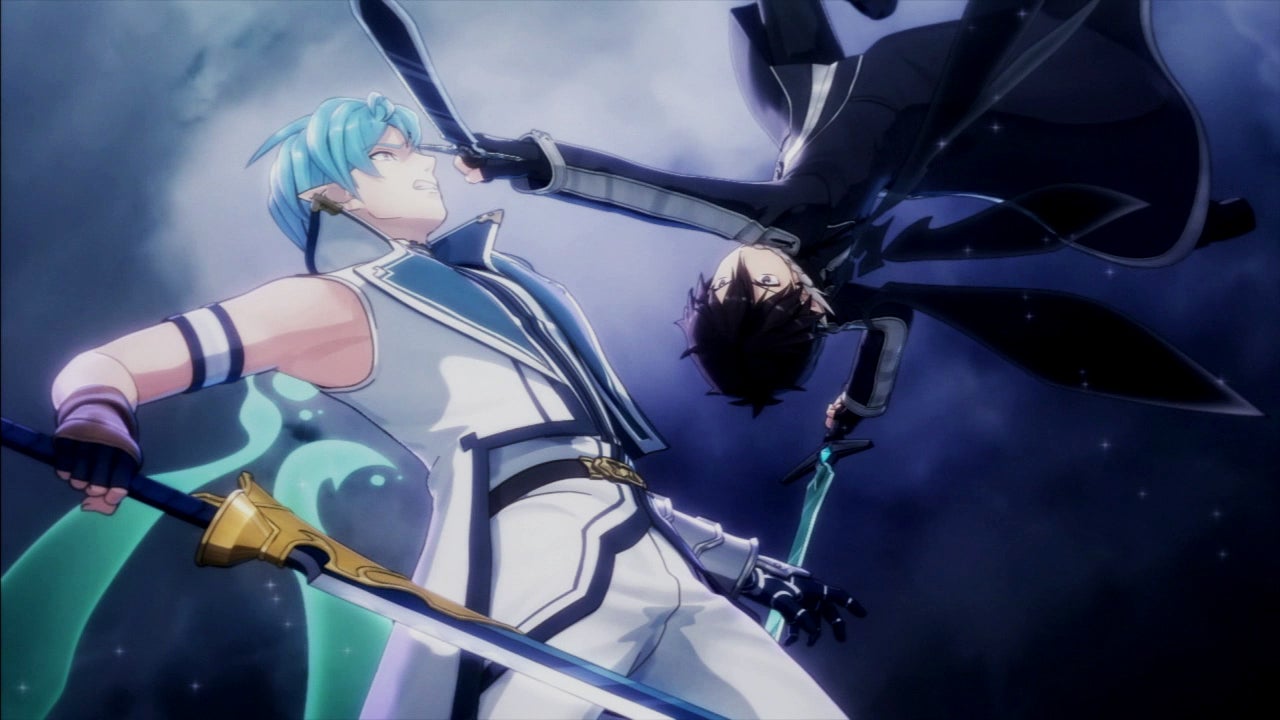 Glad to be of service strange disembodied voice. …Now, could you please get the hell out of my house and go haunt Fahey?

Ooooo. I haven't done that since he talked about Disgaea….

Sword Art Online: Lost Song was released in Japan on April 28, 2015, and on May 12, 2015, in Asia. There is currently no word on a Western release (but the Asian version comes with English subtitles).