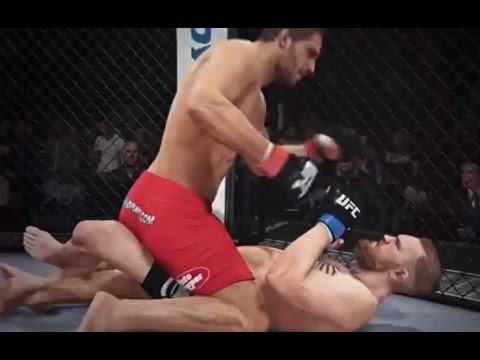 We’ve already written extensively about this weekend’s fight between Conor McGregor and Chad Mendes. It’s a massive, massive fight and is expected to break records, but the UFC has a favourite. I think its bias is showing through in this EA Sports UFC prediction video.

Some background: this fight was supposed to be Conor McGregor against the current UFC Featherweight Champion Jose Aldo, but Aldo received a rib injury and couldn’t compete. This cost the UFC a lot of money.

Chad Mendes is a last minute replacement for Aldo and is for the interim title. This essentially guarantees that the winner will be next in line to face off against Jose Aldo when he recovers.

The UFC is taking a big financial risk with this fight.

Conor McGregor is the UFC’s golden goose. He’s a flashy, striking genius and his charisma levels are through the roof. McGregor is in the process of becoming a mainstream superstar and a potential title fight with Jose Aldo will make everyone a lot of money.

The problem: Chad Mendes. Most believe that Chad Mendes is a terrible match-up for McGregor, perhaps an even more difficult match up than Jose Aldo, the champion. McGregor has never faced off against a fighter with high-level wrestling — many believe it’s his major weakness as a fighter. Chad Mendes is the best wrestler in the division.

Long story short: the UFC really, really needs McGregor to win this fight. And it shows, even in this EA Sports UFC prediction video.

In the game, Conor McGregor — included in the game before his recent incredible performances — has a lower rating than Mendes. But, in the prediction video, is shown dominating Chad. Is this wishful thinking? Is it a case of styles making fights in the game? Possibly.

Maybe I’ve got my tin foil hat on, but it really feels like a reflection of the UFC’s need/want for McGregor to win this fight handily, raising the stakes even further for a championship bout with Jose Aldo.

For the record — as a huge fan of the UFC and MMA, and as someone who has been painstakingly following the minutiae of this fight — I have McGregor winning. But in the video game? The rankings as they are? I have a hard time believing McGregor won in a simulation.