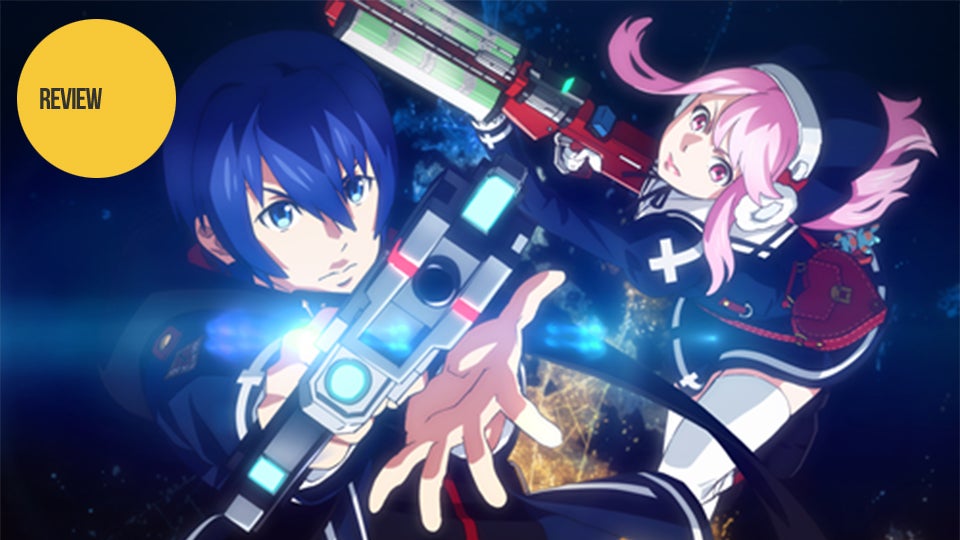 I love the Gunslinger Stratos arcade game — it makes you feel like a dual-wielding badass. But the anime? No, I cannot say that I love the anime.

Gunslinger Stratos is a story of two parallel worlds. One is a nearly fascist state where the government decides everything — even how far you can go in life based on your breeding. The other is a world of pure anarchy where people live in small tribes across the post-apocalyptic planet. However, an affliction is devastating both worlds: something that seemingly strikes at random and turns its victims to sand. In a matter of years, no one will be left. 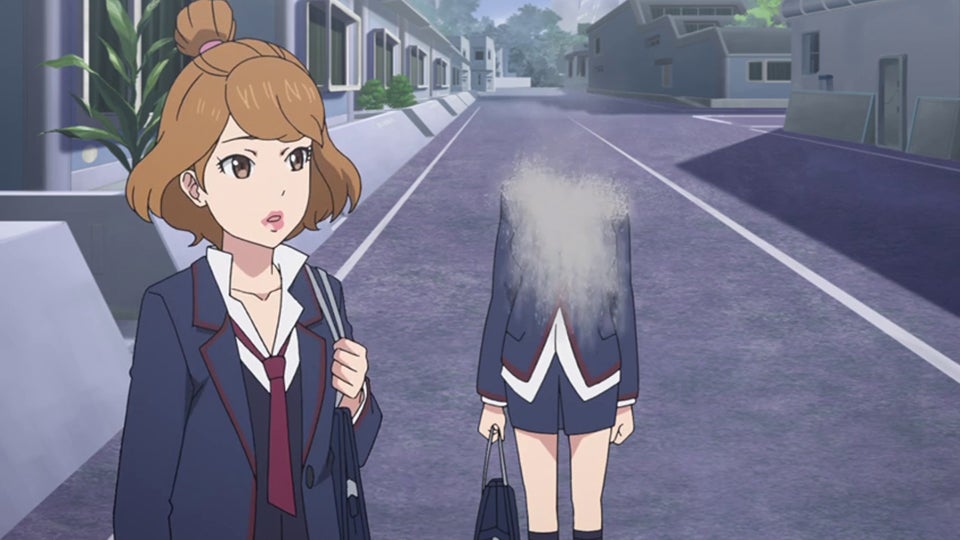 It is then that the "Timekeepers," mysterious beings from the future, appear to both worlds, bearing the message that the only way to save one's respective reality is to defeat the other. The Timekeepers facilitate a tournament of sorts. Time travellers from each world are sent back to the neutral battle ground of Tokyo in 2015 — the last point where both worlds were identical. There the time travellers battle until the other side is wiped out or retreats. The remaining side wins an energy cube — which has the mysterious ability to evolve weapons into more destructive technology. 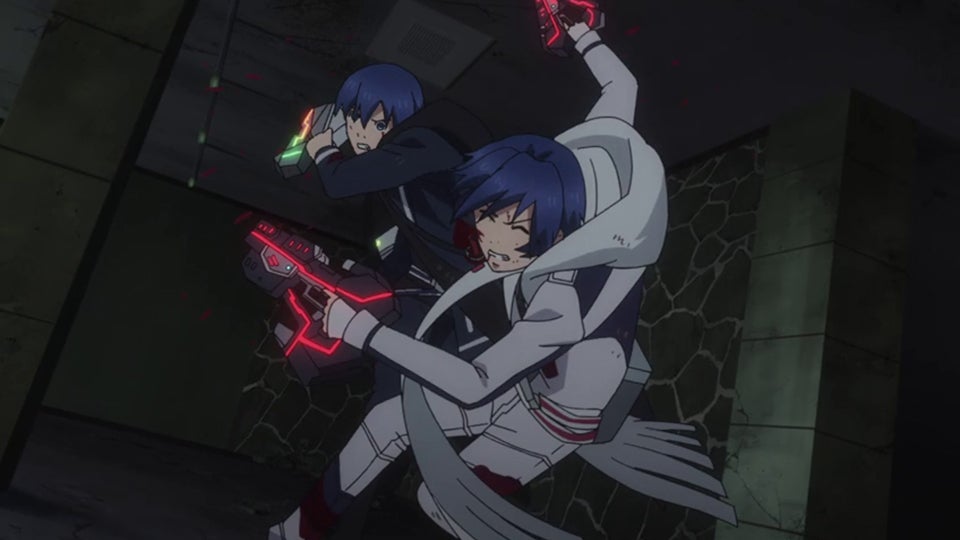 The trick of Gunslinger Stratos is that the only people who can time travel are those that exist in both worlds. Thus enters Tohru, a boy living in state-imposed mediocrity despite his fighting and intellectual prowess. After seeing a ghostly child, he and his childhood friend Kyoka fall through time and into one of the 2015 battles — where Tohru finds that the leader of the other side is his parallel self.

As all the characters of Gunslinger Stratos have parallel versions of themselves, the most obvious theme of the story is one of nature versus nurture. Tohru in the fascist world (who we'll call "Black" Tohru because of his clothing colour choice) is afraid of standing out. He keeps his head down and makes sure to never be the best at anything.

White Tohru, on the other hand, has spent his whole life fighting to be the best. In the anarchic world, only the strong can survive — and only the strongest can protect those they hold most dear. Because of this upbringing, it is no surprise that White Tohru hates his Black counterpart. Of course, Black Tohru feels the same way — seeing a version of himself with little to no compassion. In the final battle between the two, it becomes a question of how each would handle ultimate power — with one wanting to use it and the other to destroy it. 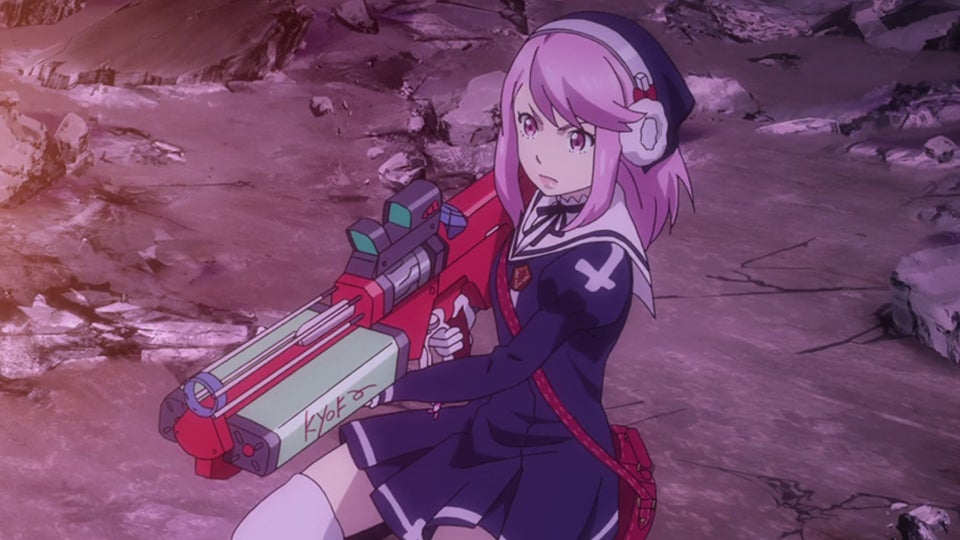 On the other hand, the two Kyokas are far more similar as both versions share a central character trait — their love for their respective Tohrus. Of course, there are differences: their outside appearances — one being just this side of royalty and the other raised on the streets — and their philosophies — one wishing to protect Tohru while the other wishing to fight alongside him. However, when it comes down to it, neither is able to harm either Tohru — something that speaks volumes about their shared nature. 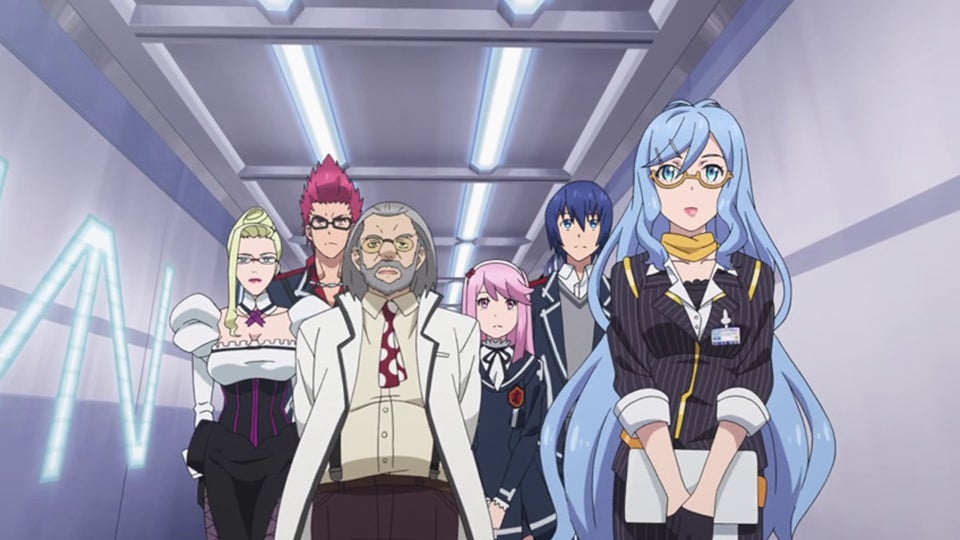 From the start, it's obvious that the "good guys" are the Black World team. We get to know far more about the characters on this side than we do about their White World counterparts. We get a story arc about Kyoka's brother, Kyoma, and his bodyguard, Shizune — as well as spend time with the psychic-powered Remy and the deadly assassin Olga. All are interesting in their own way, but as we see little to nothing of their counterparts, they lack the depth of Tohru and Kyoka. 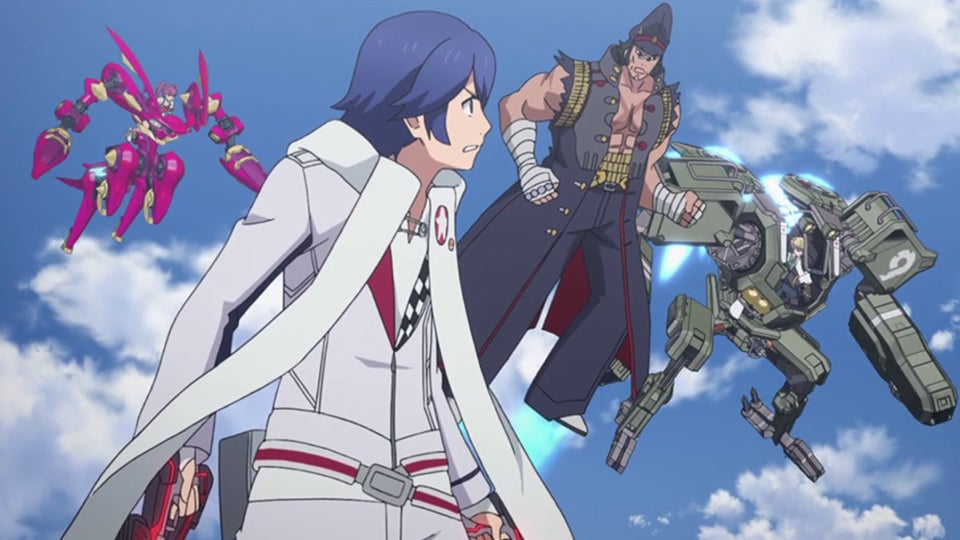 Unfortunately, the rest of the cast is even more woefully underdeveloped. As Gunslinger Stratos is based on a video game, it seems the series creators were compelled to bring over as many of the game's characters as possible. This means many characters have nothing more than a single line of fan service dialogue for the watching gamers. Beyond that, it seems these characters are just present as cannon fodder to increase the body count.

But to the series' credit, people do die in Gunslinger Stratos — sometimes even main characters. This does a lot to build tension and makes it feel like the stakes are constantly high. The series has a good mystery on top of this — i.e., what exactly do the Timekeepers hope to gain by making the two worlds fight. And while this mystery is satisfactorily explained, the series' climatic fight against the Timekeepers isn't. 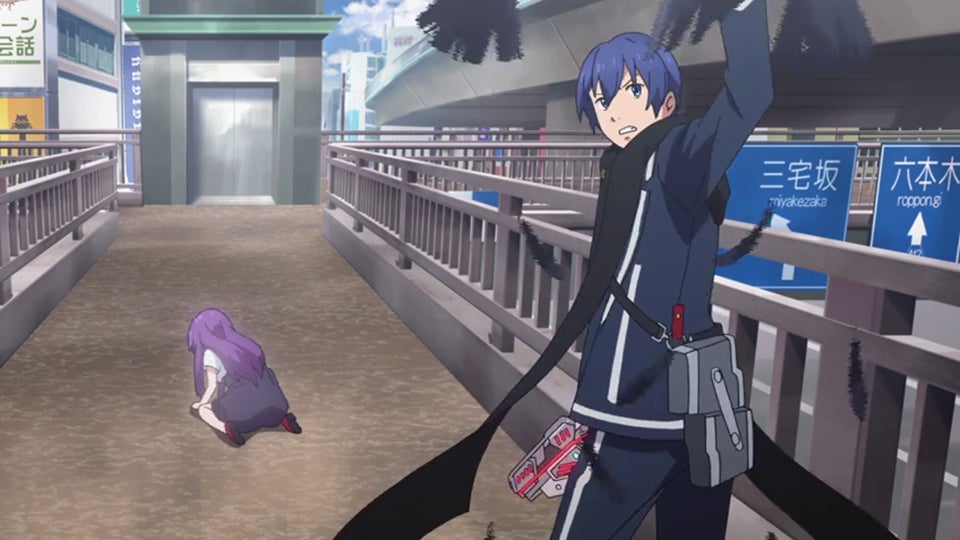 When it comes down to it, Gunslinger Stratos resorts to technobabble to try to hand-wave away a flimsy climax. Fighting the Timekeepers, much less beating them, seems impossible given what we learn about them over the series. Yet, even that might be forgivable if the action was so compelling you were never inclined to give the plot a second thought. But it's not. Not in the least. 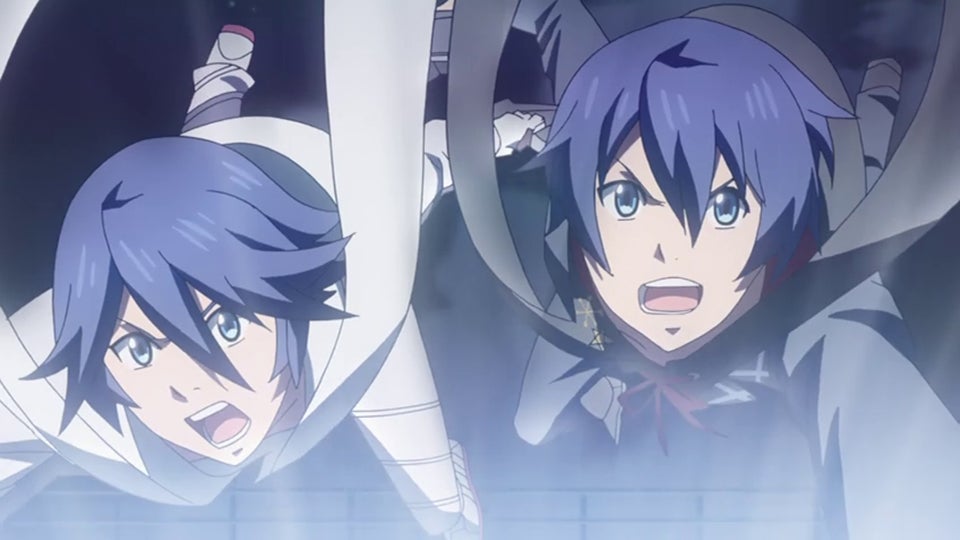 Gunslinger Stratos looks terrible. The animation is surprisingly low budget from top to bottom. And while awesome things have been done with a small budget, Gunslinger Stratos is an action anime — one with gravity-defying gun battles that leave Tokyo in ruins. What should be a visual spectacle is truncated into short, ugly battle scenes that use every trick in the book to animate as cheaply and quickly as possible. What's worse is that outside of battle it looks just as bad — facial features and character proportions are often incorrect even in scenes with little to no movement. It's an eyesore. 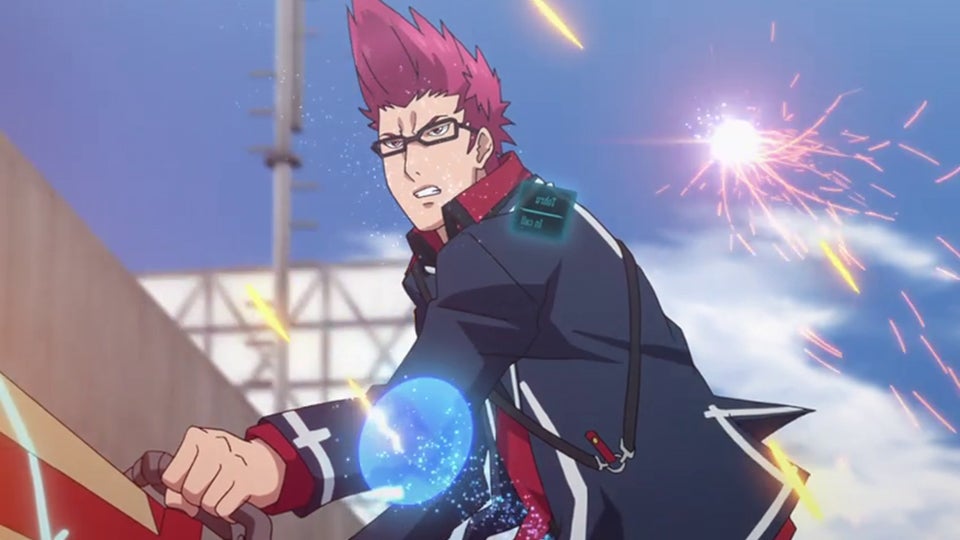 There are more than a few cool ideas in Gunslinger Stratos: Two parallel worlds fighting in their common past to protect their respective existences, a strange race of time travellers orchestrating the whole thing for its own ends, and using the whole setup to explore the nature versus nurture debate. However, the execution is lacking. The plot falls apart by the end and there are too many characters that get no development — thus seeming like nothing more than a waste of space. Then there is the quality of the animation — or lack thereof as it is in this case.

Luckily, for me, all I have to do is go down to my local arcade to get the bitter taste of this anime out of my mouth.

Gunslinger Stratos aired on Tokyo MX in Japan. It can be viewed for free in the with English subtitles on Crunchyroll.