Lego Dimensions Might Have A Little Too Much Fan Service 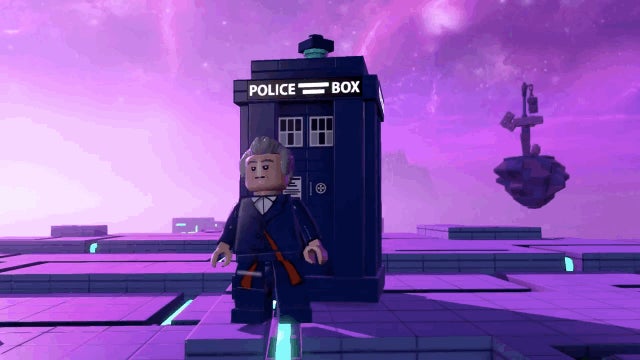 Yes, that is all of the previous regenerations of the Doctor up there, in Lego video game form. They're coming to a game that already has characters and elements from Batman, Lord of the Rings, Portal, and Back to the Future among others. This game might be too much for even Fahey.

Just in time for Comic-Con, the new trailer for Lego Dimensions shows off a bit of how everyone's favourite Time Lord — voiced by current Doctor Peter Capaldi — will be appearing in the game. There'll be a Doctor Who Level Pack , too. From the press release:

Fans who want more Doctor Who in LEGO Dimensions will be able to purchase the Doctor Who Level Pack which includes an additional mission-based Doctor Who level, along with a LEGO minifigure of the 12th Doctor and LEGO models of the TARDIS and K-9, all playable in the game. When the 12th Doctor is defeated in the level, he returns as the 1st Doctor and then regenerates back up to the 12th Doctor again. The interior of the TARDIS will reflect the corresponding Doctor the player embodies or can be manually selected. There's even a jukebox inside where players can choose among different versions of the Doctor Who theme music. The TARDIS and K-9 models can each be physically built and then rebuilt twice to do entirely different things in the digital game for massive variety.

If this game winds up having Marvel characters in it, the spacetime continuum may not survive.