A blood-soaked dungeon, the whimpers of terrified children, a mysterious horned beast and a man speaking in an incredibly bad accent — this is a job for one of America's greatest crime-fighters.

Blues and Bullets is an episodic crime noir PC adventure starring Eliot Ness, eader of the legendary law enforcement group nicknamed The Untouchables. Years after he put away the infamous Al Capone, Ness runs a dirty spoon called Blues and Bullets, saucing up burgers and giving away pie left and right. But when a face from past shows up looking for help finding their kidnapped granddaughter, Ness hangs up his apron and straps on his holster — will he discover the world isn't as black and white as it seems?

No, it's all pretty much black and white, except for the red things.

Eliot Ness, the former leader of the legendary Untouchables, wished only to spend the rest of his days working in his diner, not dwelling too much on the cesspit of corruption his city, Santa Esperanza, had degenerated into.

But things rarely go as planned.

When children suddenly start to disappear and the police just simply a blind eye, Eliot decides to take the law into his own hands, track down the culprit and bring him to justice by any means necessary, even if he has to abandon his dreams of a peaceful life and again get embroiled in shootouts with the usual array of assassins and hoodlums.

Helped by various characters from some unexpected places, the player must guide Eliot through the increasingly morbid and decadent scenarios searching for clues to solve the cases in the five episodes of this season's Blues and Bullets.

Developer A Crowd Of Monsters is really onto something here. It's hard to believe this is the same studio that released Funk of Titans. 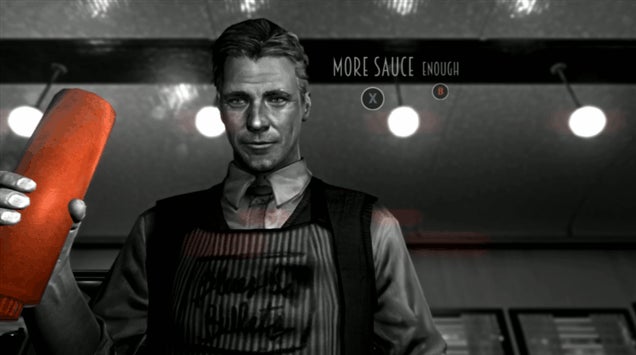