The UFC Needs To Change Its Stoppage Rules, Badly 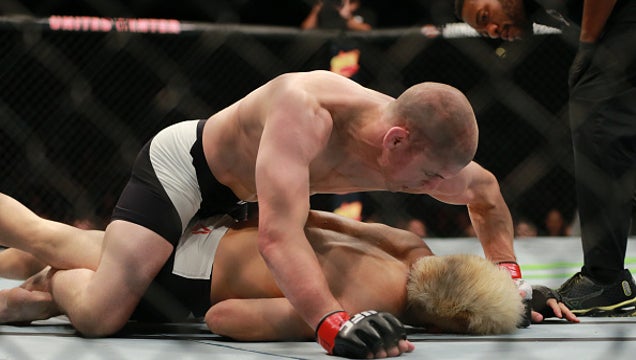 Joe Lauzon knew his opponent was done. Problem is, the referee didn’t.


Over the weekend, UFC on Fox 16 saw TJ Dillashaw demolish Brazilian skull crusher Renan Barao even more decisively than he did the first time around. And while it was a stunning display of hot fist-on-face action, it wasn’t the defining moment of the event. At least, not for me.

That moment came a few fights earlier, when lightweights Joe Lauzon and ageing Japanese legend Takanori “The Fireball Kid Grown-Up” Gomi squared off to get the fight card rolling. It was a brief yet action-packed bout, evenly contested on the feet but so lopsided that you could use it as a piano ramp on the ground. Before long, Lauzon — one of the most prolific finishers in the whole UFC — took Gomi’s back and started raining down punches on a helpless Gomi. Referee Herb Dean stood by and watched — attentive, but unconvinced that Gomi needed saving.

After an uncomfortable handful of seconds, Gomi stopped resisting. The ref stepped in, but he didn’t end the fight. So Lauzon did something I’ve never seen a fighter in such a dominant position do: he got off Gomi, stood up, and walked away, risking a clear cut victory in the process. Gomi got off the ground too. Fortunately for Lauzon, the referee ran over to Gomi and — realising he was busted up, dazed, and on the brink of unconsciousness — declared him unfit to fight. So J-Lau got the W after all. 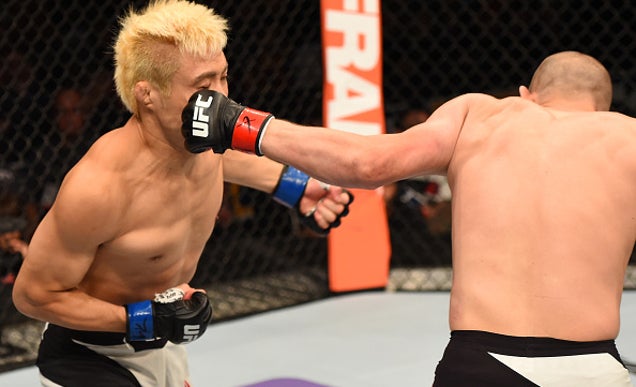 At the time, it seemed like Lauzon decided to have mercy on a fallen foe, a former champion he grew up admiring. As it turns out, Lauzon thought the fight was about to be stopped and stood up a little early. Ultimately, though, the situation still broke down the same way: Lauzon didn’t want to hit Gomi anymore, the ref wasn’t convinced despite the fact that Gomi had absorbed quite a bit of punishment, and Lauzon walked away. The problem with this picture? Part of the referee’s job is to protect fighters. If it gets so bad that a fighter has to call their own fight, something has gone wrong.

Now, I’m not saying Herb Dean is a bad ref. He’s actually one of the better ones in MMA, in my opinion. But MMA refs are, at best, inconsistent with their stoppages. Sometimes they let a fighter eat a few too many punches. Occasionally they let a fighter eat way too many punches. This is because MMA is not like boxing; if a fighter hits the ground, the fight keeps going. It’s up to the ref to decide whether or not a fighter is “intelligently” defending themselves and, if not, stop the fight. But that’s wholly subjective. One ref might see a person turtled up, praying for the sweet release of death, while another might see a crafty snake of a combatant coiled and waiting to strike. Sometimes they mistake the former for the latter, other times the latter for the former.

That’s horseshit. When the difference between life and death (or a decent retired life and severe long-term brain damage) is in your hands, there’s no room for you to be wishy washy about it. But I don’t blame the refs. I blame the system, the rules. 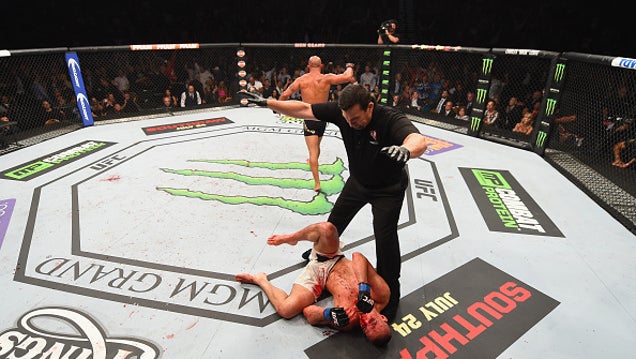 I do not envy MMA refs, nor do I think I could do their job — as it is currently outlined — better than them. They’re trained professionals, and they make the right calls more often than not. But, straight up, they’re part of a shit system. It’s high-time for an overhaul, one that sets rules in stone, concretely defines them instead of saying, “Uhhhhh, I dunno. You figure it out in the heat of the moment surrounded by a blaring crowd as a human being gets punch-paddled down the River Styx right before your eyes.”

It could be as simple as specifying a number of a punches a grounded fighter can take before a ref must declare a fight over. Yes, I know that doesn’t allow for the fact that some fighters hit much harder than others — and I imagine we’d see some annoyingly early stoppages as a result — but that’s just an example solution. My point is, something needs to be done. I love MMA, I love a brain-sloshing slugfest as much as anybody, but even I feel sick to my stomach when I see a fighter who’s clearly done continue eating shot after shot — especially when they’re older and more fragile, ala Gomi. It’s like they’re getting the life punched right out of them. It’s heartbreaking.

The current stoppage system feels like a holdover from a much earlier era of MMA. The rules underpinning it are imprecise, sloppy. Don’t get me wrong: I don’t want to see MMA become limp-wristed point fighting. The sport is great because of how close to A Real Life Fight it is. Plus, some of the best moments in fight history are comebacks, moments when a fighter on the brink of defeat surges back and smashes their opponent with a thick slab of indomitable will. But things need to be codified, specified at least a little. And with the right sort of rules in place, I think the UFC could cut down on early stoppages as well as glaringly late ones. There’d need to be some serious thought put into how to do it right, but I do think we could end up with a “best of both worlds” situation.

A couple days ago, my girlfriend sent me a Daily Beast article where the author suggested that bare-knuckle fighting would be safer in the long run than current UFC policies, based on the brutal Lawler vs MacDonald fight from a couple weeks ago. I don’t agree, but it’s eye-opening that a seemingly rational human being would even be driven to that conclusion. I mean, we’re talking about bare knuckle fighting. Broken hands, busted skulls. Not a good look for a professional sport. But the feeling behind the piece, the essence of it, struck a cord. The UFC needs to revise its rules before somebody really gets hurt.