The X-Men Are Great As Old Farts

Fourteen years ago, a run of X-Men comics took Marvel's famous mutants out of superhero costumes, put them in rockstar leather uniforms and detoured away from years of dead-end storylines. The X-Men got much cooler. This week, we get to see what happens when the X-Men's cool runs out.

One of the core conceits of the X-Men is that they're outsiders. The genetic mutations that make mutants look weird and give them strange, awesome powers also earn them hatred and ridicule from plain ol' humans. When he started writing New X-Men in 2001, iconoclast comics writer Grant Morrison leaned into the outlaw ideal. Along with artist Frank Quitely, Morrison re-imagined the characters' world as a sexily transgressive subculture, one that was at odds with the non-mutant mainstream and itself. The X-Men rebranded themselves as an international rescue organisation, and the story arcs of this era were fuelled by a pop/punk/club/celeb-wannabe culture clash.

Morrison, Quitely and a host of other artists flooded The School for Gifted Children with weird new students, introduced a secret evil twin to Professor X's backstory and created the idea of secondary mutations to take established characters in different directions. Telepathic temptress Emma Frost wasn't just a mind-reader anymore; she could also turn her skin into unbreakable diamond and get physical, too. Beast became more of a cat. After New X-Men ended, the superstar mutants went back to a more superheroic mode but some elements from that run had lasting effect on the collective mythos. 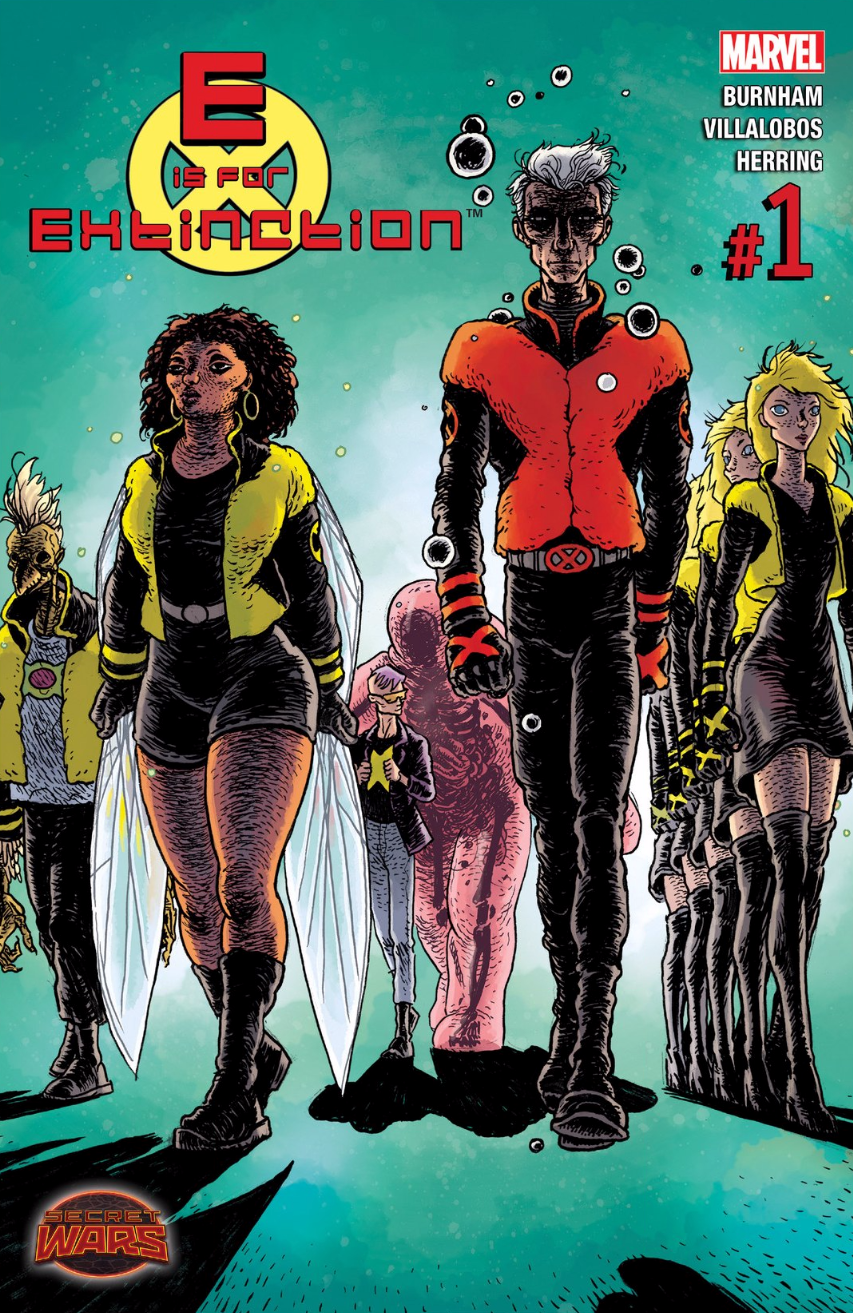 Spinning out of Marvel's Secret Wars event, E Is for Extinction is an alt-reality spiritual successor to Grant Morrison's New X-Men run. The new series by frequent Morrison collaborator Chris Burnham, Ramon Villalobos and others finds its appeal as the thematic endpoint of the path paved by Morrison and Quitely: nothing stays cool for ever. Wolverine's a washed-up drunk whose famous healing factor has quit on him. A flabby, older Cyclops moans about how long his optic blasts take to recharge. The younger X-Men tease former teacher Emma Frost about looking old and out of date. 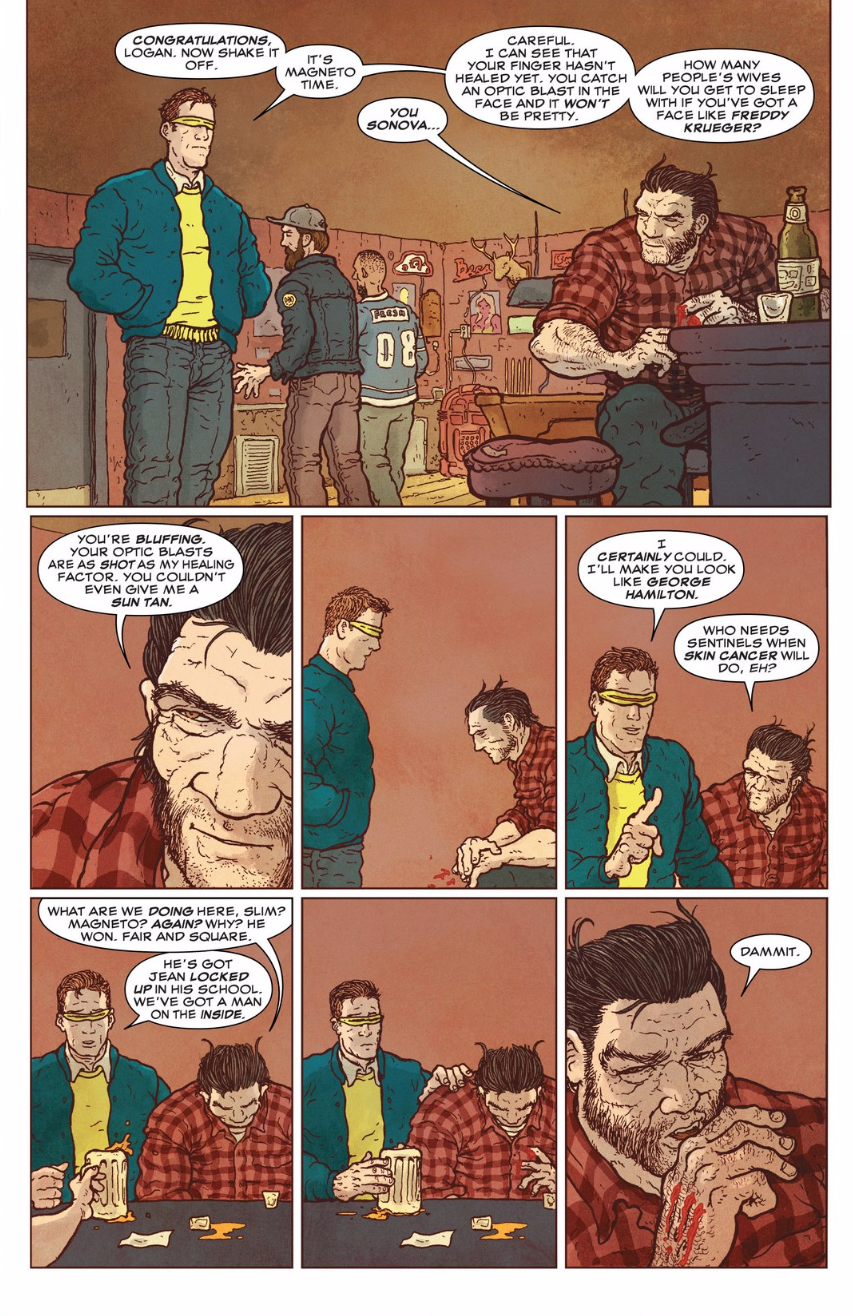 In this comic, mutants are the majority. The same humans who persecuted members of homo superior get tested in the hopes of learning whether their kids will carry the X-gene. Xavier's ideological sparring partner and occasional ally Magneto leads a team of X-Men comprised of some students introduced during the Morrison era, now grown up. Magneto also runs The Atom Institute, an educational facility where both exceptional humans and mutants can hone their gifts. The most recent issue of E Is For Extinction came out this week, continuing its enjoyable riffing on Morrison-style weird-sexy.

Burnham's follow-up to the Morrison/Quitely run is so much fun because it breaks down, pokes fun at and reconfigures that title's signature elements. E Is For Extinction's name itself comes from the first New X-Men story arc, and the cover for issue #1 copies the construction of New X-Men #114. Burnham — who's worked as an artist with Morrison on various Batman comics and their creator-owned Nameless — came to prominence as a direct result of his ability to draw like Quitely. The illusion of constant change is central to superhero comics and Burnham thumbs his nose at this genre fallacy while also availing himself of it. You can see this kind of recycling all over the series' first two issues. For example, an embryonic fusion of Jean Grey and the Phoenix force is the reason that Cyclops gets his teammates back together. It's a hoary old X-Men plot that's cyclical in its very nature and an example of the series' self-mocking ethos. "It's a brave new X-world! Oh wait, it's the same old stuff, presented in a way that's just different enough to capture our nostalgia..." 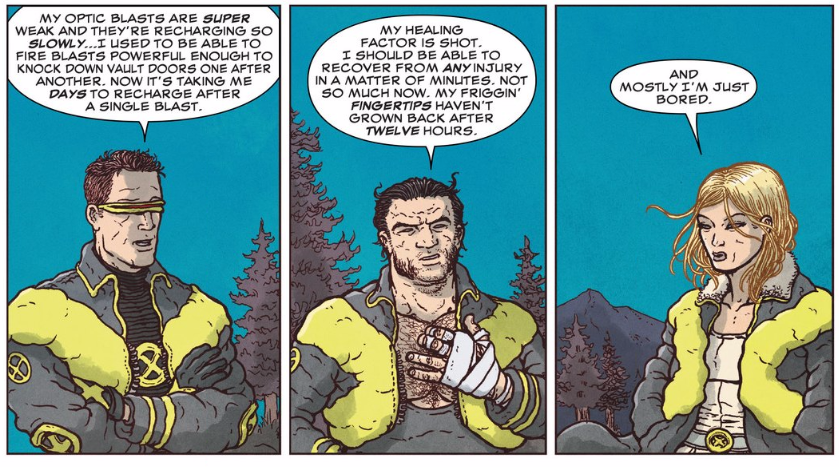 It's hilarious to see once-edgy, formerly sexy superhero characters enduring a midlife crisis like this. But Burnham's not dismissing the out-of-step Children of the Atom entirely. Take the new secondary mutation that allows Scott Summers to manipulate electronics. It seems sort of useless at first — just like him — until it's shown to also hypnotize people. Superhero comics may hold on the old stuff a little too zealously, but sometimes it's because the well-worn plots and character relationships just need a bit of self-awareness and new blood to mutate into something enjoyable again.