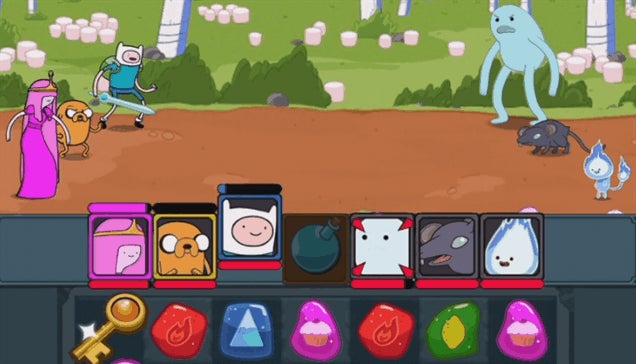 And so an eight year love affair with the original puzzle role-playing game franchise ends with a game that should have been the best thing ever but just isn't.

There's no going back to the heady days of 2007, when Puzzle Quest: Challenge of the Warlords combined match three puzzles and role-playing elements in a wonderfully sublime and addictive way. Things were simpler back then — a single hero with a selection of experience-level unlocked skills, facing off against the creatures that stood between him and the downfall of a great evil.

If I'm being honest, D3's Puzzle Quest series started going downhill once the second game came out. Puzzle Quest Galactrix valiantly tried to change the format with its hex-shaped puzzle board and futuristic setting, but it fell flat. Streamlined and simplified, Puzzle Quest 2 still covered all the basics and was the closest the series has gotten to a return to form, but the times were changing.

The true end of the beginning was Marvel Puzzle Quest. It was the first licensed game in the series, and the first free-to-play game. It's a solid game with some great ideas and nifty competitive community events, but once D3 realised people would pay good money for familiar characters, it was all over.

So here we are with Adventure Time Puzzle Quest, another licensed title featuring the barest of the original series bones with Cartoon Network's hit animated series draped haphazardly across.

Now I've only played for a couple hours, so there's always the chance it gets really good three or four hours in, but it's not a very good chance. I don't see the long, plodding battles against random enemy creatures with far too many hit points letting up any time soon.

The object of the game is to form a party of collectible heroes and villains and take them on quests, which are a series of checkpoints on a map so poorly formatted that some of the under-icon objective text cannot be seen. 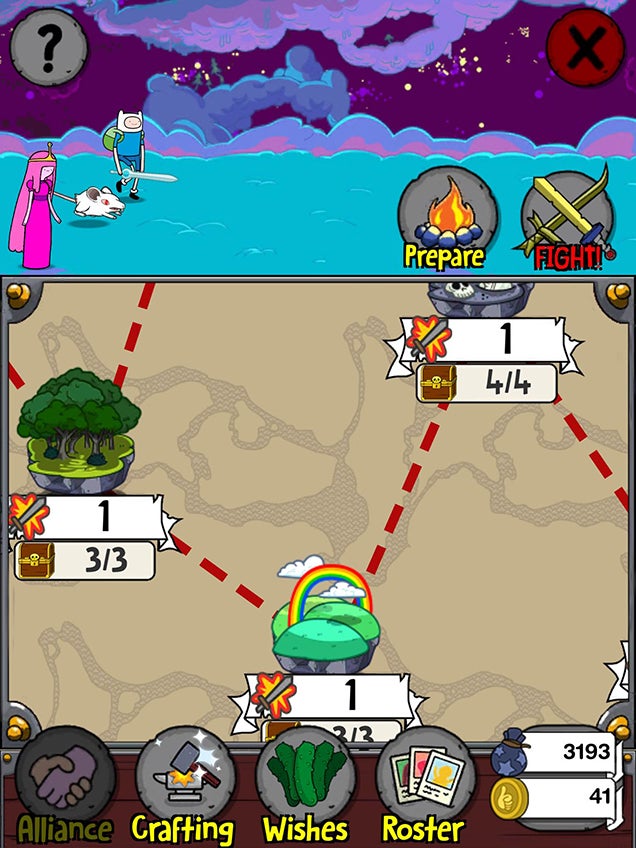 Once the map is navigated you prepare for battle. First go into the crafting menu and see which items you can create. This is done by scrolling through a list of items you can create across three categories and tapping each one until you find the recipe you have all of the parts for.

Then you go into the party screen, where you can swap characters in and out of your three-person adventuring team. Sometimes their health is displayed correctly. Other times the game tells you one character has low health but displays a full health bar. The trick is to exit the menu and/or game completely and come back in, because this is some sloppy shit. 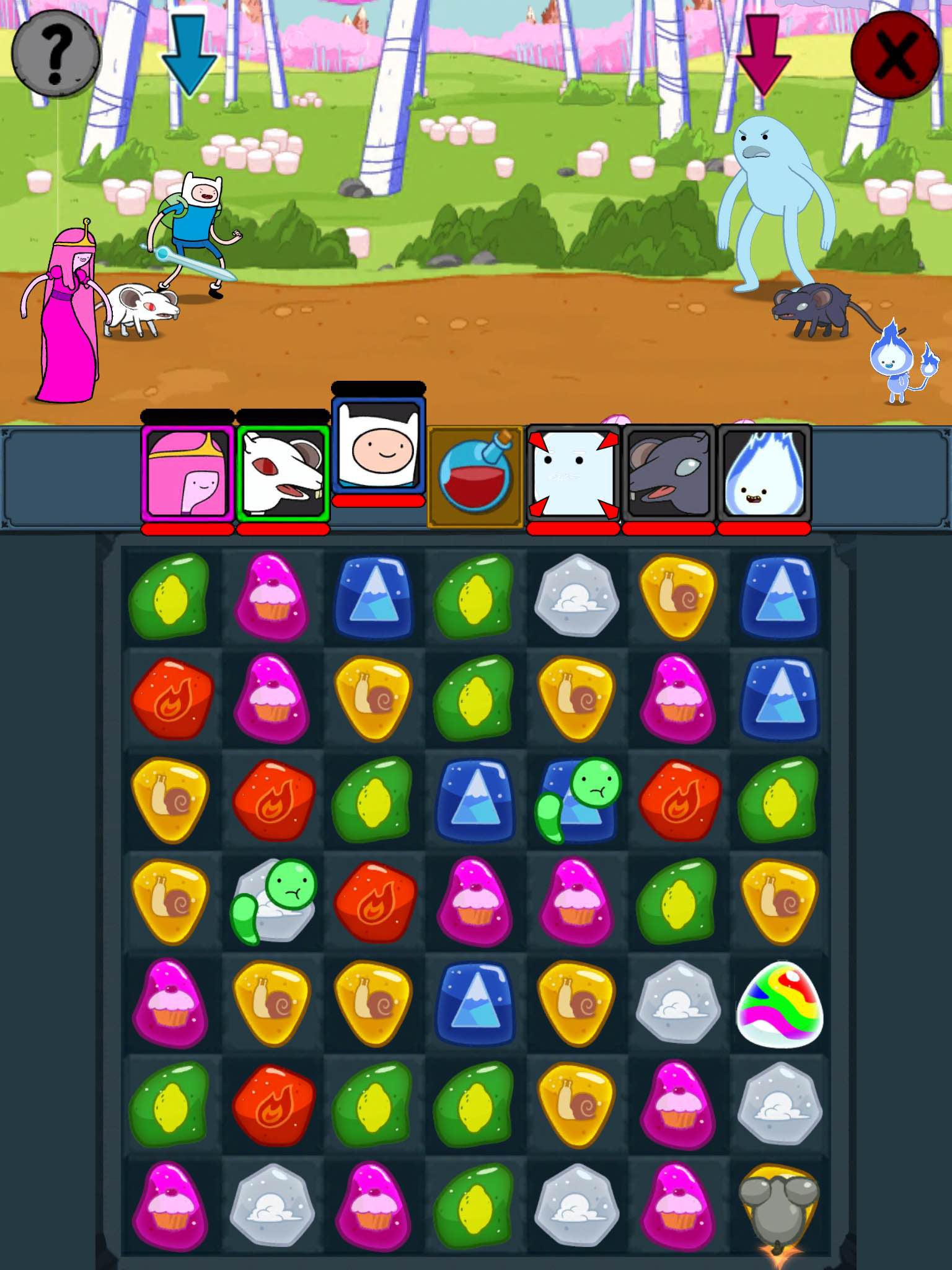 Then it's time to battle! Match gems in groups of three or more to attack. Each character is assigned a colour — match gems of those colours and you'll fill a special meter, allowing them to launch special attacks or abilities.

Defeat the enemy team and you win! Collect your spoils — a list of nonsensical items that mean something to the folks who go deep on crafting — and move on to the next quest. Or maybe the game locks up and you have to restart.

Adventure Time Puzzle Quest, available now for Android and iOS, is the same sort of free-to-play, character-collecting puzzle combat game as Marvel Puzzle Quest, only it's sloppy, unfinished and in some places broken completely. 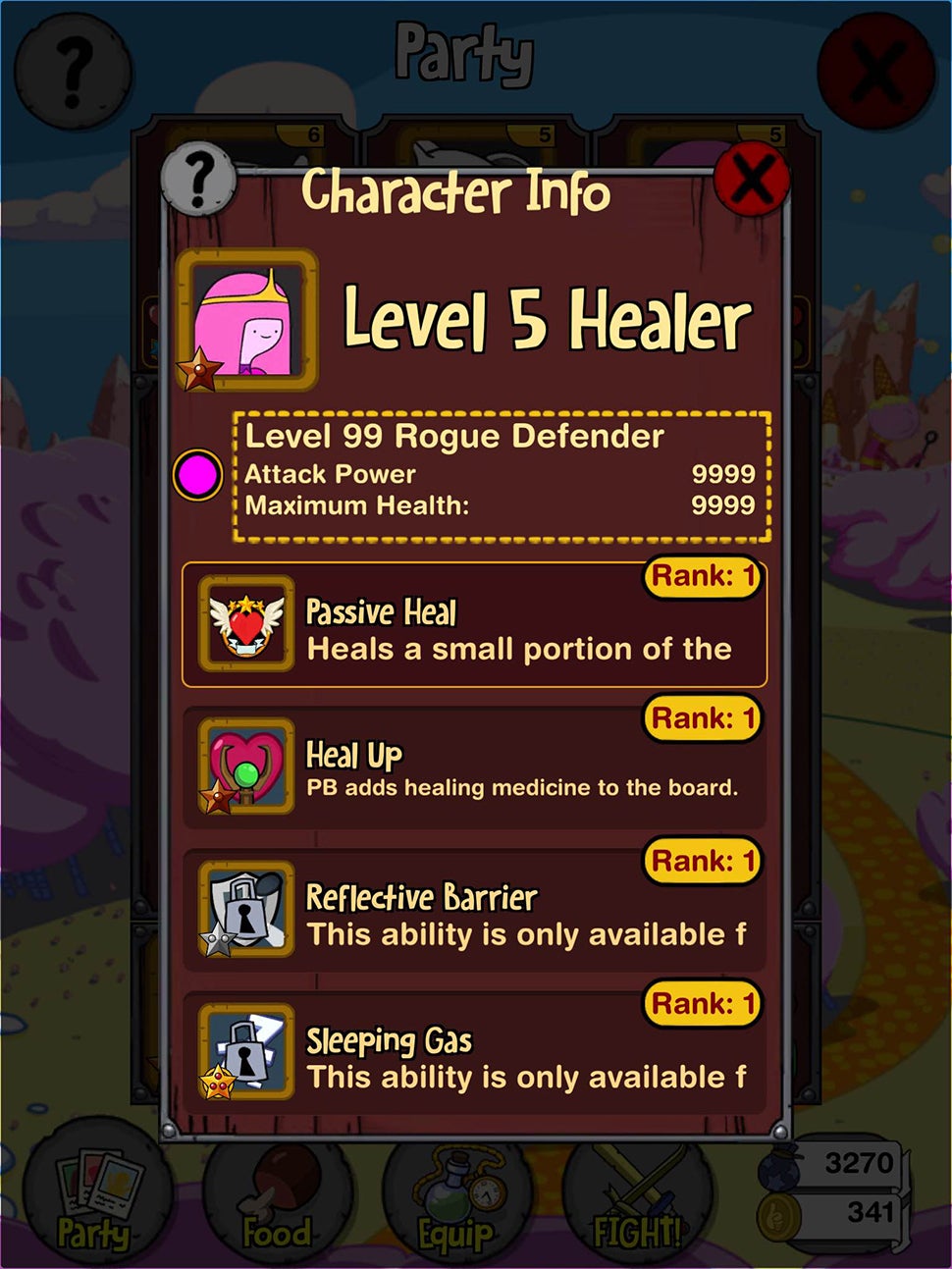 Just look at this character info sheet. What happened to the text for the bottom two skills? I am assuming it changes when those powers are unlocked, but I have no fucking idea when they will. Maybe that's what the text running off the screen says. I don't know.

When I dislike a game that supposedly combines two things I love there is only one explanation — I obviously don't love both things anymore. What's worse, Adventure Time Puzzle Quest is dragging down one of my favourite characters with it. Who doesn't love BMO? 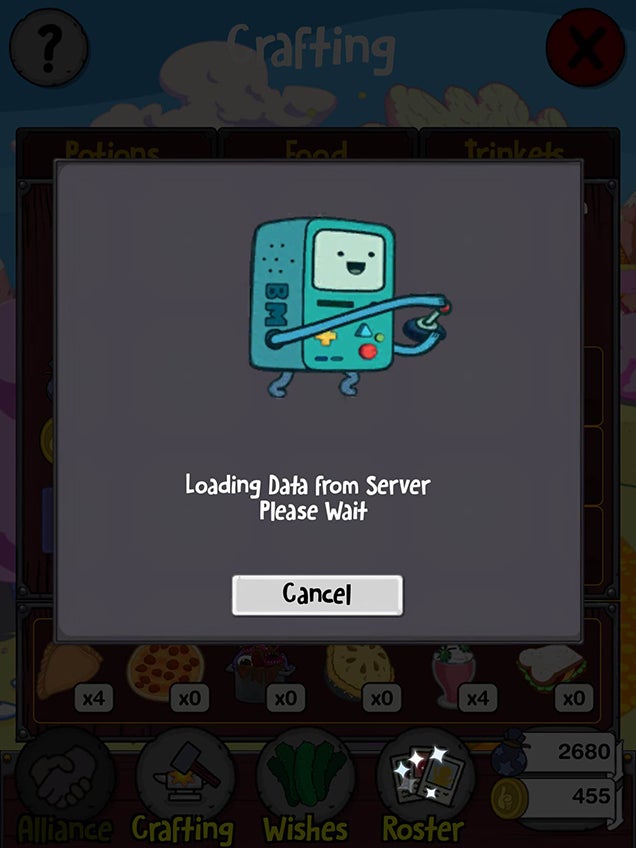 After seeing this image pop up every time I try to craft an object, give a character an item or attempt to add a new character to my roster, BMO can go fuck itself. Especially after it pops up three times during a roster reshuffle, I play a round, it locks up, I restart and discover none of my changes take.

So yeah, we're done, Puzzle Quest. Maybe sometime in the future you'll change and I'll once more see the puzzle RPG I fell in love with, but right now I need my lumpy space.