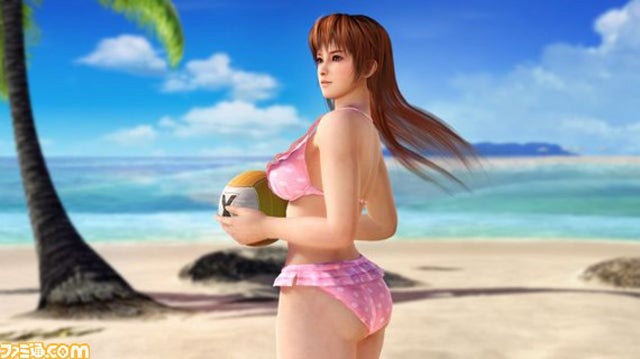 Because of course it will. Although don’t hold your breath just yet for a Western release.

“The ‘Yawaraka Engine‘ (an engine specifically developed to render human skin more realistically) for Dead or Alive 5 for the PS4 and Xbox One had gotten a great deal of attention and I’ve been constantly bombarded by comments saying that people want to play Xtreme Volleyball with the Yawaraka Engine.” Hayashi said in an interview with Weekly Famitsu.

In terms of video games showing CG skin, it’s hard not to mention games that aren’t full on pornography and not bring up Xtreme Volleyball, the game(?) that features the girls of the Dead or Alive series in skimpy swim wear bouncing around and playing volleyball. For the new game, Hayashi noted that the development team has upgraded the Yawaraka Engine and that Xtreme 3 will offer much more realistic skin textures and details than Dead or Alive 5.

As for the character roster, due to the sheer amount of variations of character interactions, the new game will only feature nine of the current fifteen female characters. Koei Tecmo will be releasing custom download themes on the Japanese PlayStation store and will selecting characters to appear in the game from the number of downloads. This means that depending on the numbers, long-time main characters like Kasumi may not show up in the new game.

Currently, Xtreme 3 is scheduled for release only in Asian territories. “As a fighting game, there are a great deal of fans overseas, but for the Xtreme series, domestic fans make up an overwhelming majority. So, after much deliberation, we’ve decided to release the game only in Japan and other Asian territories.” Hayashi said, adding, “However, if there is enough interest, we may develop an international version that has been edited for Western audiences.”