What Should Twitch Play Next? 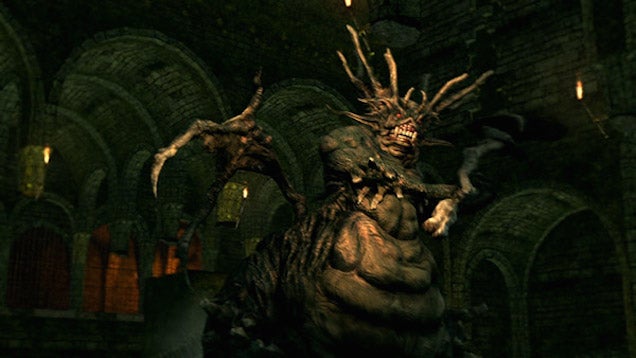 With Twitch Plays Dark Souls creeping closer towards the death of the second boss, the thought of the un-coordinated mess that is Twitch Plays Anything beating something as punishing as Dark Souls is becoming more and more a possibility.

So let’s say they do it. Let’s say Twitch beats Dark Souls once and for all, despite the insurmountable odds and the frustrations surrounding whether it’s OK for them to pause or not.

Let’s say Gwyn hits the deck. What do they move onto then? Here are some ideas.

You wouldn’t advocate Fallout for the mechanical difficulty, but the manner in which Twitch Plays likes to create new religions and form factions would make the decision making fascinating.

Given half the fun of Fallout is just wandering around and getting lost in the world, it’d be equally fascinating to see how long it would take Twitch Plays to actually progress the story. The directional inputs alone would be a nightmare, and you’d have to think they would pick up every side quest imaginable. It should almost be mandatory.

Question is: would you start with Fallout 3, jump straight to Fallout 4, or pick New Vegas in between? Any of them would be interesting.

The thought of crowdsourcing inputs for something as punishing as Battletoads seems utterly absurd, but if Twitch manages to work out Dark Souls, then surely Battletoads is perfectly manageable.

Created as an alternative to the Teenage Mutant Ninja Turtles — which would be another thing Twitch could attempt — the platformer’s famed difficulty would prove an interesting experiment. I wonder if it would result in something like The Button sub-reddit, where Twitch ends up holding its furthest run as an achievement rather than actually finishing the game.

Twitch Plays opened the door to slower, more turn-based games when they introduced pausing into their Dark Souls run. So if they’re prepared to pause for action adventures to allow the chat to make decisions, what would it be like if the game was literally just a series of decisions run by straw polls?

King of Dragon Pass was published in 1999 and it’s been republished on mobiles and as of last month, Steam. It’s a narrative heavy game that plays out like a cross between choose your own adventure, an RPG and a management simulator.

Players are tasked with leading their tribe to victory by going to war with certain clans, completing quests, building shrines for various gods, choosing who to promote or demote from the tribe’s inner circle, fending off dragons, managing resources and diplomacy over 600 interactive scenes.

King of Dragon Pass doesn’t necessarily have to be the game of choice, but the way Twitch Plays Pokemon panned out would prove intriguing when transposed into a decision heavy, text-based adventure.

Perhaps the most natural progression from Dark Souls, which requires very specific timing on attack angles, dodges and lunges, would be the top-down Hotline Miami series.

The utter chaos of seeing the Twitch chat fire a pistol/rifle and then having to cope with the ensuing alarm would be hilarious, as well as an ample challenge suitable for the history of the series.

It wouldn’t be too difficult for the chat or the people behind the channel to manage either: there aren’t a great deal of controls to transpose, the mechanics are easily understood and the objectives perfectly clear.

I’m not entirely sure how you’d get the aiming to work with the chat — maybe a limitation would have to be imposed whereby it’s locked to straight ahead of the character at all times — but it’s the kind of challenge that you think would be perfectly surmountable.

When you’re constantly dealing with a myriad of conflicting inputs, what could be harder than navigating from point A to point B in the fastest time possible?

The obvious challenge here would be translating the value of each input into the Mario Kart controls, but it’s arguably no different than the challenge Twitch Plays overcame to get Dark Souls working.

It’d also be hilarious just to see the reaction of the chat every time a Blue Shell or a Rocket was fired off. New religion, anyone?

What would you like to see Twitch Plays tackle next — once they finish Dark Souls, of course.