If Ever A Game Needed Explaining, It's Gal Gun 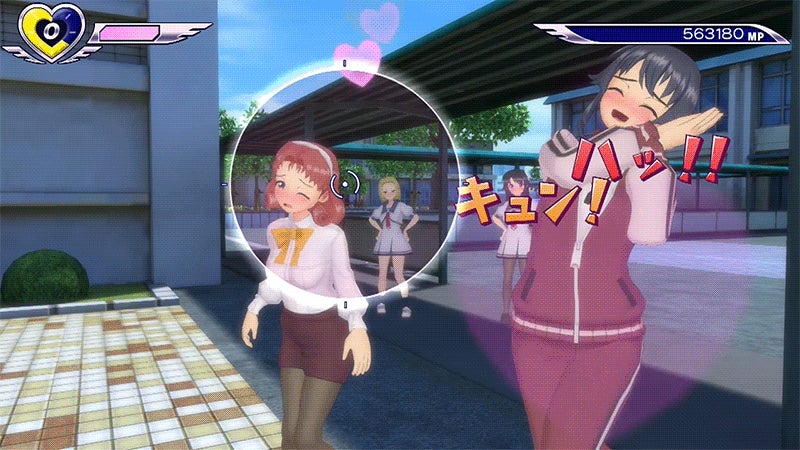 Welcome to the latest in Kotaku's series of explainer articles where we drag in a random disembodied voice and have a little intimate chat about a game, comic, or something else our readers might find interesting.

However, this time I am just exploiting the system. After spending two solid days doing nothing but playing Gal Gun, I need to talk with someone about it.

And I drew the short straw.

As far as gameplay goes, Gal Gun is a rail shooter… 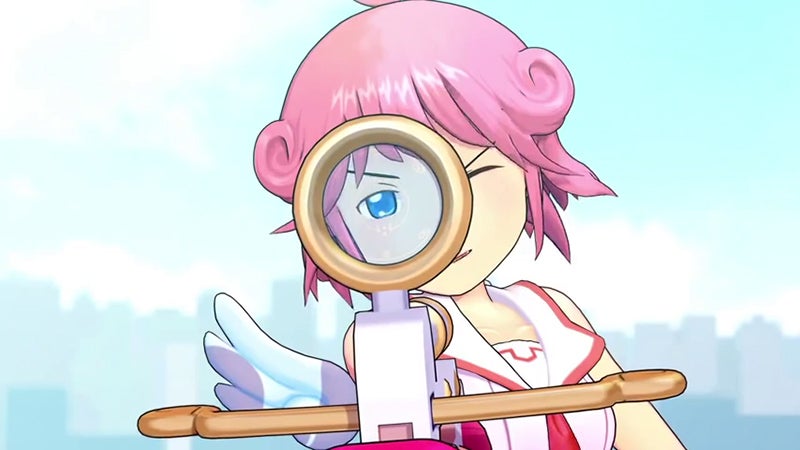 How do I put this? Gal Gun is the story of an angel who comes to earth on a cupid-esque mission to get a high school boy together with his true love.

However, she accidentally shoots him with more than one of cupid's arrows, turning him into the most sexually attractive man on the planet.

Unfortunately for the boy, there is a major downside to this. If he is not able to win the heart of his true love by the time the effects wear off at sunset, he will be destined for a life alone. 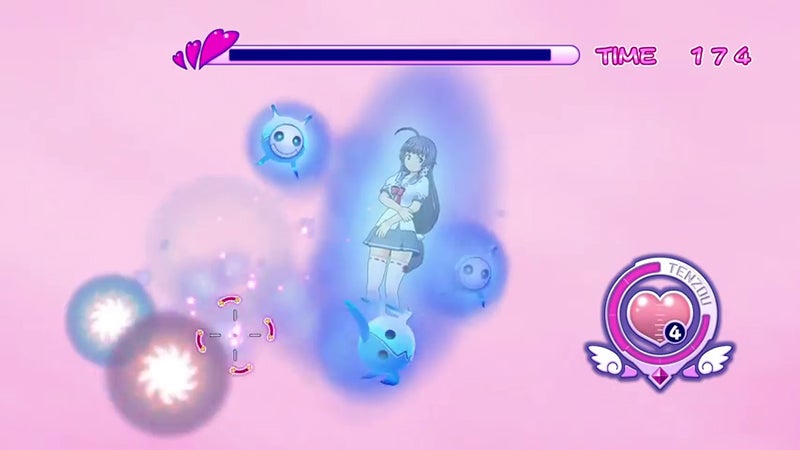 I don't think I get the conflict. Shouldn't he just be able to walk up to his "true love" and bam! they're together? I mean he is the sexiest man in the world.

Well, therein lies the trick. The three possible love interests all have their hearts completely closed off for various reasons — making them immune to his magnetism. Unless he is able to find out why and help his chosen girl overcome what haunts her, he's doomed.

Look, while this is obviously a juvenile love fantasy, I'm not seeing why you felt the need to talk with me about this.

I… may have left one little detail out. 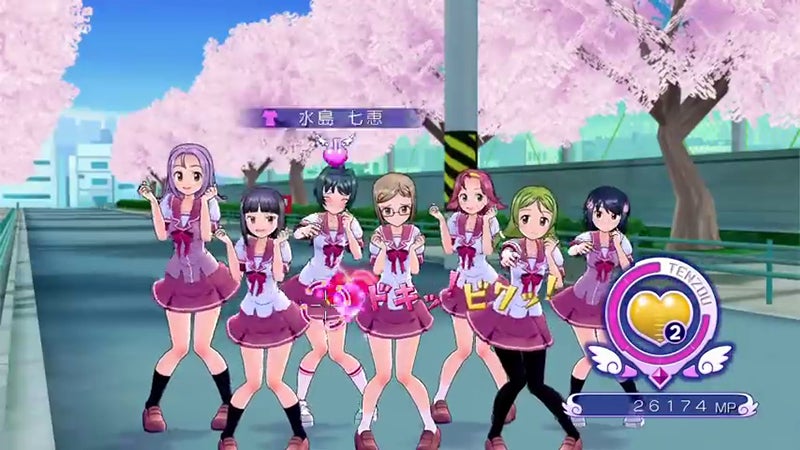 You see. Being the sexiest guy in the world means the female students on campus (and even the female teachers) all attempt to mob the poor guy with confessions and love letters, preventing him from helping his true love. So to save him from the female hoards, the angel gives him the "pheromone gun" — a gun that shoots cupid's arrows. And while it doesn't harm the girls, it does incapacitate them, leaving them collapsed on the ground in fits of ecstasy.

Whoa, whoa, whoa. Back up. It sounded like you just said that this is a game where you go around shooting high school girls with a magic orgasm gun.

Yes, that's pretty much exactly what I am saying.

So, it's House of the Dead… but with orgasming school girls?

And I suppose next you're going to tell me there are tentacle monsters! 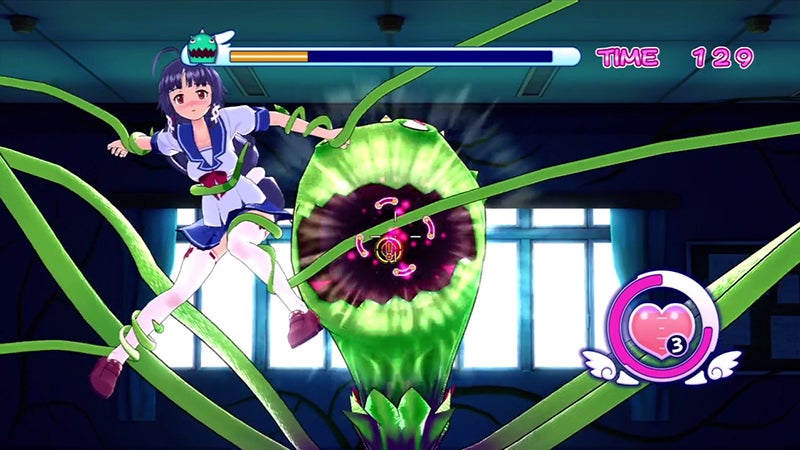 There's no denying it. Gal Gun is 100% pure fanservice — and to the game's credit, it never pretends to be anything but.

The girls you shoot are in school uniforms, gym clothes, or swimsuits. And you can even enter "doki doki mode" ("doki doki" being the Japanese onomatopoeia for an excited heartbeat) where you can isolate any of the random attacking girls and zoom in on individual body parts as they squirm and moan. 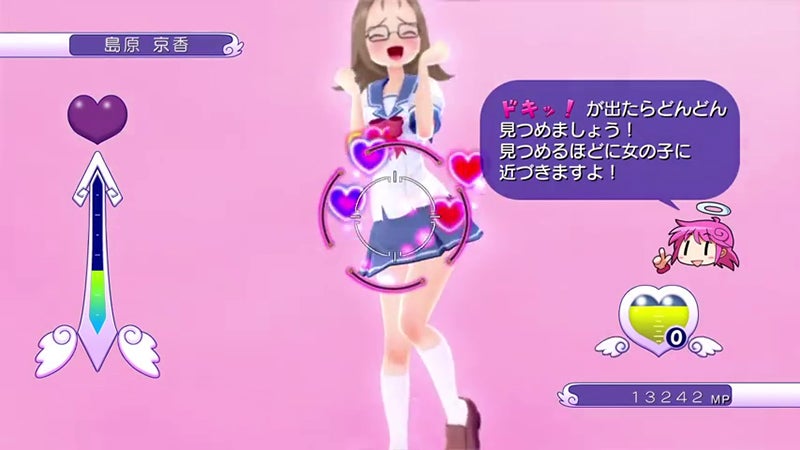 OK, wait a sec. A quick google search shows that this game came out in 2011.

Yup. In fact, when it came out, the first Gal Gun was one of Japan's few rare Xbox 360 exclusives — though it did eventually come to PlayStation 3 (with Move support).

Indeed. For the past few days I've been playing the sequel: Gal Gun: Double Peace.

That is an appropriate reaction.

So, I ask with trepidation, is it simply more of the same?

Yes — only turned up to eleven.

I know I am just a disembodied voice, but you should know: I am face-palming right now. 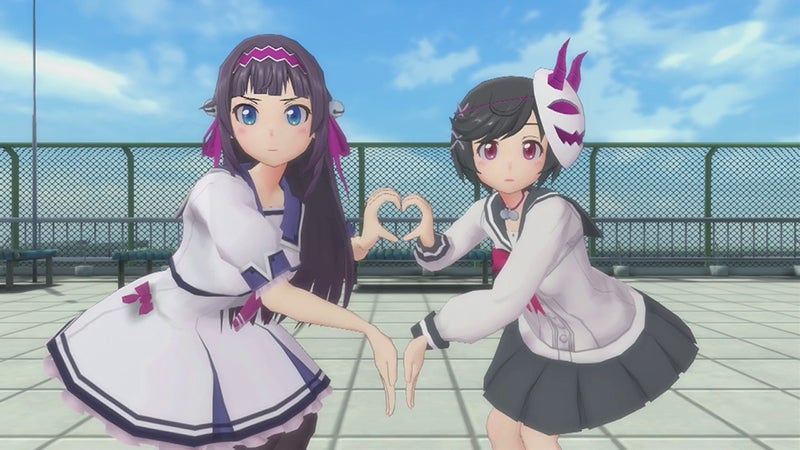 Basically, Double Peace takes place a year later and follows another angel and boy pair suffering a similar fate. Only this time the main romance options are a pair of devil-hunting sisters — the typical true feelings-hiding tsundere older sister and quiet dandere younger sister. Of course, why this pair is unaffected by his charm is obvious: Each thinks that he should be with the other sister.

Is going after both an option? It totally is, isn't it.

Of course, it is. It's also hilarious. 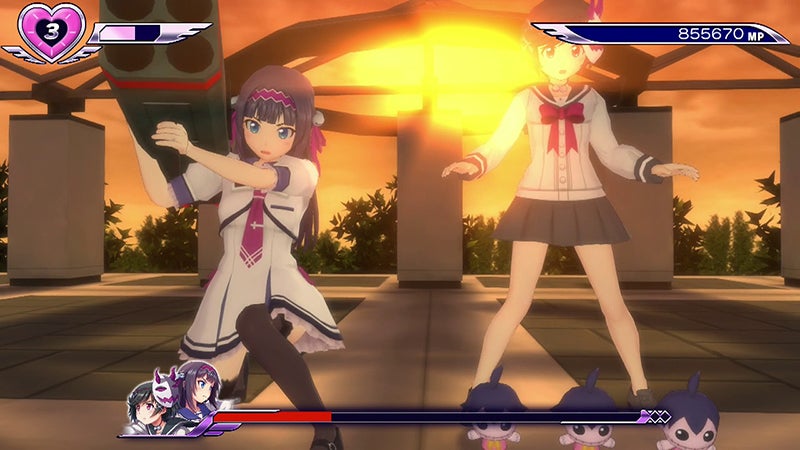 Oh? They aren't down with the idea?

Well one throws ninja stars his way while the other shoots him with a rocket launcher.

There's also a devil running about with the demonic equivalent of the pheromone gun.

In this case? Little dolls that turn the girls chasing our hero into man-stomping sadists.

Of course. Why did I even bother asking? And I assume you can date the devil, too?

Indeed you can — or the angel if you prefer.

I assume the whole "shooting teens with an orgasm gun" is the same, though.

Actually, on gameplay alone, Double Peace is a darn good rail shooter. The whole system this time around is designed on looking down the sight of the pheromone gun. While it lowers your reticle movement speed and restricts your vision, it allows you to see and shoot through objects — helping you find secrets and hidden girls. 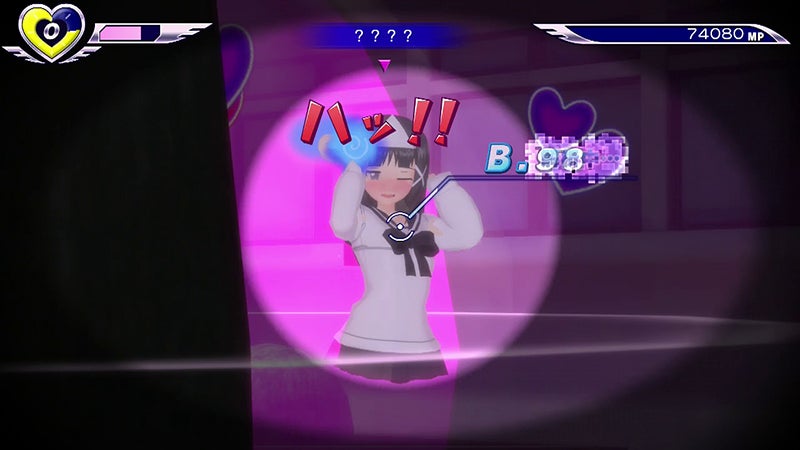 By "hidden girls" you mean, girls about to jump out and ambush you?

Well, that and ghost girls.

… You're saying that you shoot dead girls with an orgasm gun which then allows them to move on to the afterlife without regrets?

That is what I am saying.

Wait, if you can see through objects, does that mean…?

Yes. You can see through the girl's clothes while using the scope. 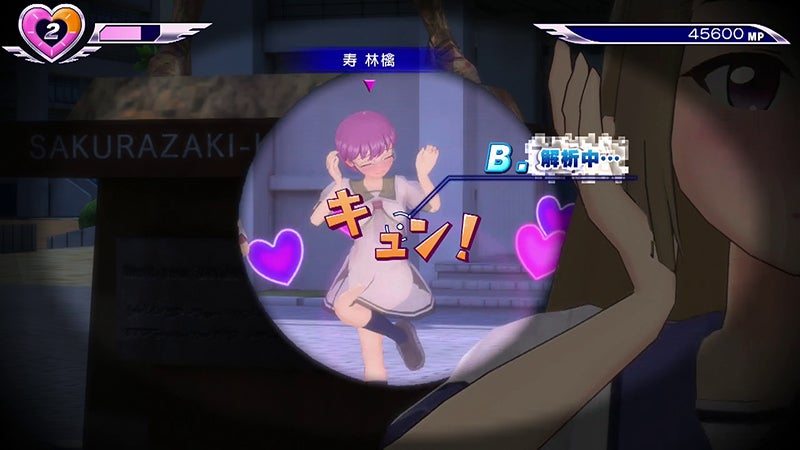 However, the clothes are only semi-transparent — you can see the outline of what's underneath but not the details. Unless…

Unless you spend about $US90 on the DLC item "Pheromone Z."

Wait. How much is the game?

So that means the DLC item that lets you see through the girl's clothes is a fair amount more than the price of the game?

And I thought Bandai-Namco's DLC prices were bad. 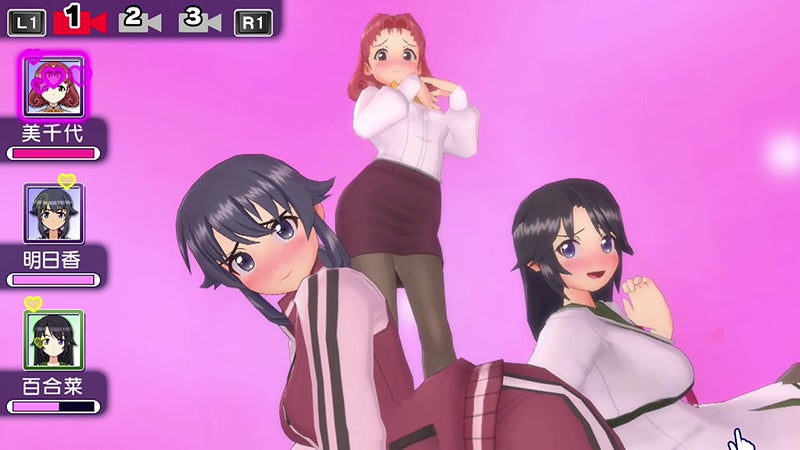 I suppose I should also mention that now, instead of zooming in on one girl in "doki doki mode" you can now do up to three at once. But that's not the biggest change. That comes from Double Peace being on PS4 and Vita. 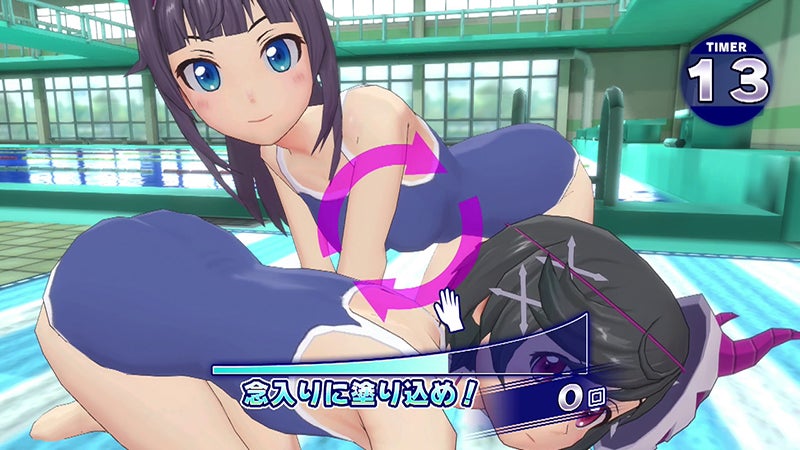 Yep, touch controls. Several times throughout each route, you use touch controls in suggestive ways — be that massaging oil on both sisters or pushing the older sister's butt when she gets stuck crawling through a window.

I hate you so much. You know that, right?

The younger sister gets attached to the ground with sticky goo.

Look, when it comes down to it, Gal Gun and its sequel are boys' adolescent fantasies. They are unabashed titillation and fanservice, pure and simple. As an adult, I look at these games and laugh at the ridiculousness of each and every scene. It's just so over-the-top. It's like a car crash, you know you shouldn't watch but you can't tear your eyes away. 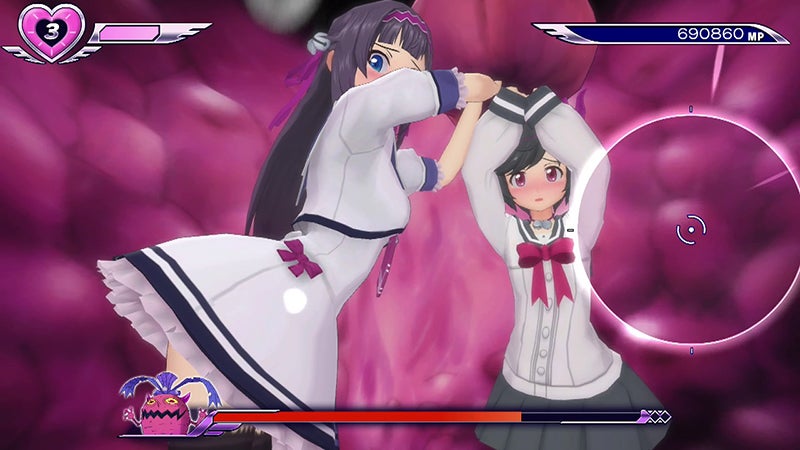 Oh, I realise that. I was just making sure you understand that I hate you on a deeply personal — almost spiritual — level.

Huh. Well, I'm glad we got that cleared up.

Gal Gun: Double Peace was released for the PlayStation 4 and PlayStation Vita on August 6, 2015. Its developers are currently searching for a publisher to bring it West.