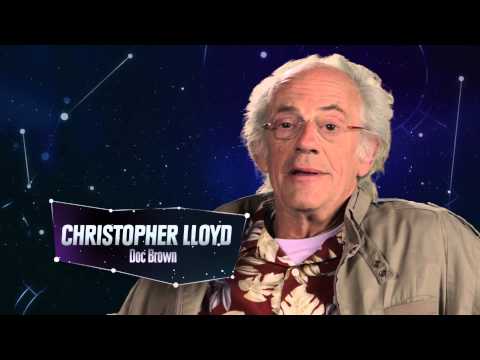 Michael J. Fox and Christopher Lloyd from Back to the Future, Stephen Merchant and Ellen McLain from Portal, Gary Oldman as the game’s big bad and two different Chris Pratt performances — LEGO Dimensions‘ definitely got talent.

We’ve got Peter Capadi as the 12th Doctor, Jenna Coleman as his companion, Clara, and Michelle Gomez as Missy, short for Mistress. The rest of the Doctors — they’re all in here — will feature voice clips from archival footage.

And how about Michael J. Fox back in the blocky shoes of Marty McFly, side by side (well, soundbooth by soundbooth) with Christopher Lloyd? Members of the original cast of Ghostbusters, Lord of the Rings (not Ian McKellen, sadly), Scooby Doo (including Frank “Megatron” Welker as Scooby and Matthew Lillard as Shaggy).

All that and two of gaming’s funniest characters, GLaDOS and Wheatley, aka Ellen McLain and Stephen Merchant.

Rounding out the cast are a pair of original characters, the villainous Lord Vortech and helper robot X-PO, brought to life by Gary Oldman and Joel McHale respectively.

At this point even if I hated LEGO — if LEGO had killed my father, and I had I liked my father — I would pick up the game just to hear all of these people talk.

Then I’d kick myself for not just watching other people play through it on YouTube for free.