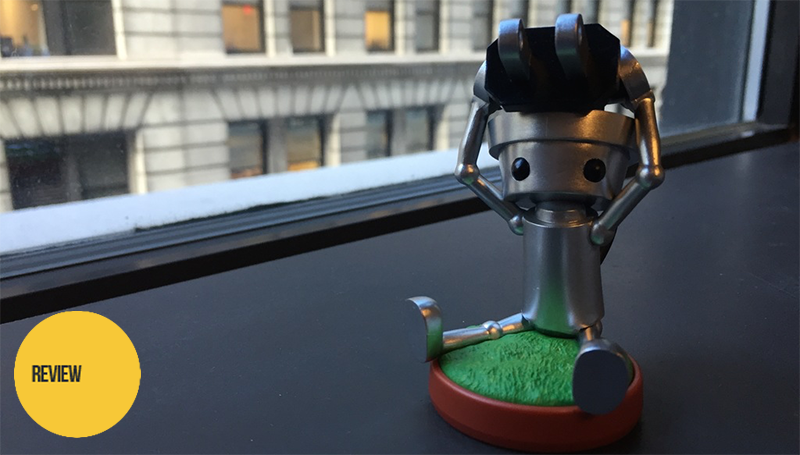 If Chibi Robo weren't so cute, this review would be easier to write.

Look at the little guy with his electric plug tail! Look at him dressing up as Link from the Legend of Zelda

Look at him meeting new people: 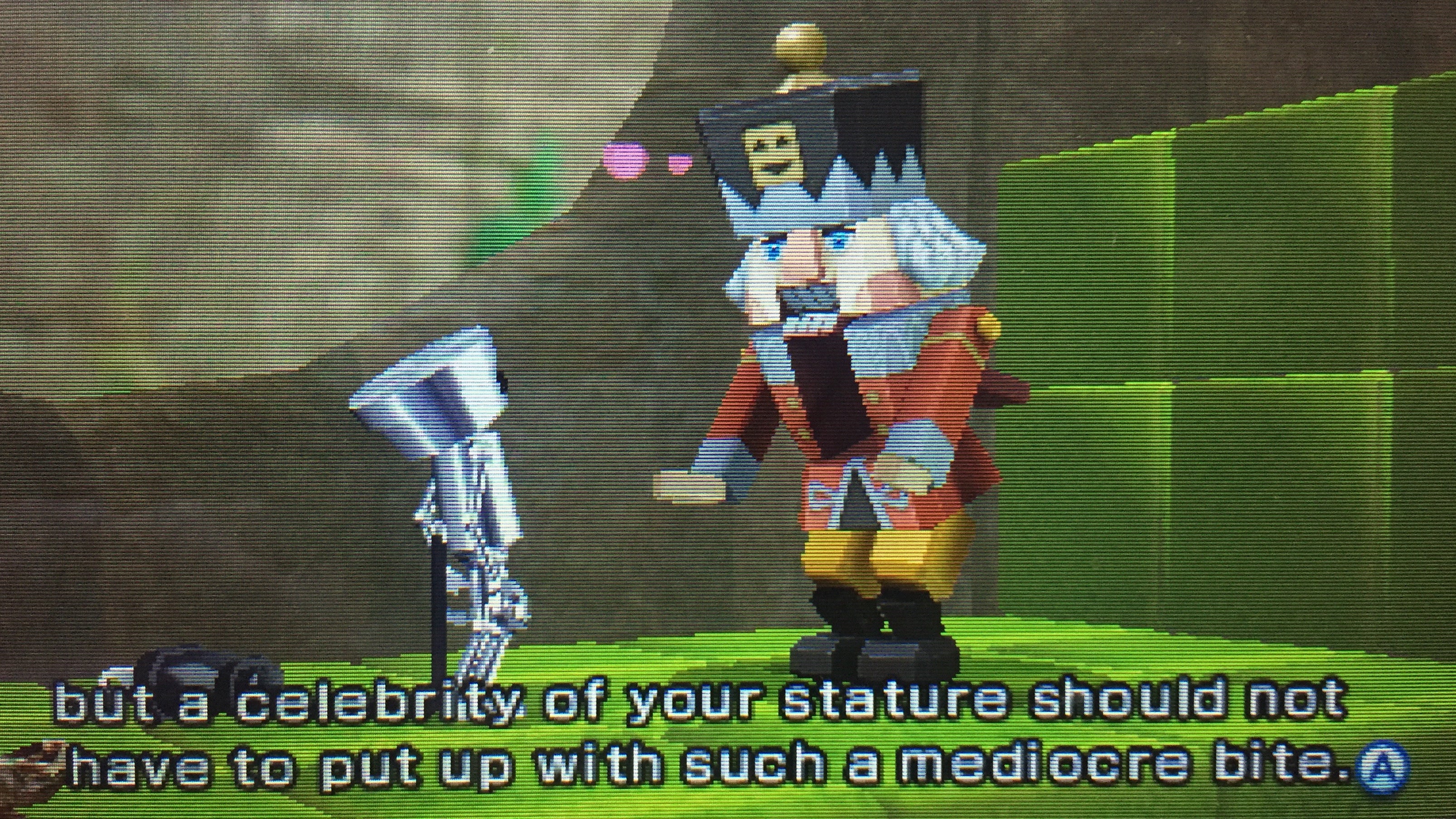 Unfortunately, this little scamp's new game is an oddball mediocrity, a game with an abundance of weird elements but a lack of remarkable gameplay. Across a few dozen levels, players can mostly just make Chibi Robo run, jump and use his tail as a grappling hook — all good options but seldom is there an opportunity to put any to great use.

The potentially excellent core idea in Zip Lash is that Chibi Robo's tail gets longer in each of the game's levels as you use him to collect little blue and red orbs. He starts each level with a short tail that he can barely use to reach anything. If the player explores and collects, however, that tail will become longer and more useful for whipping distant bad guys, for swinging across chasms and for zipping to a level's distant corners. 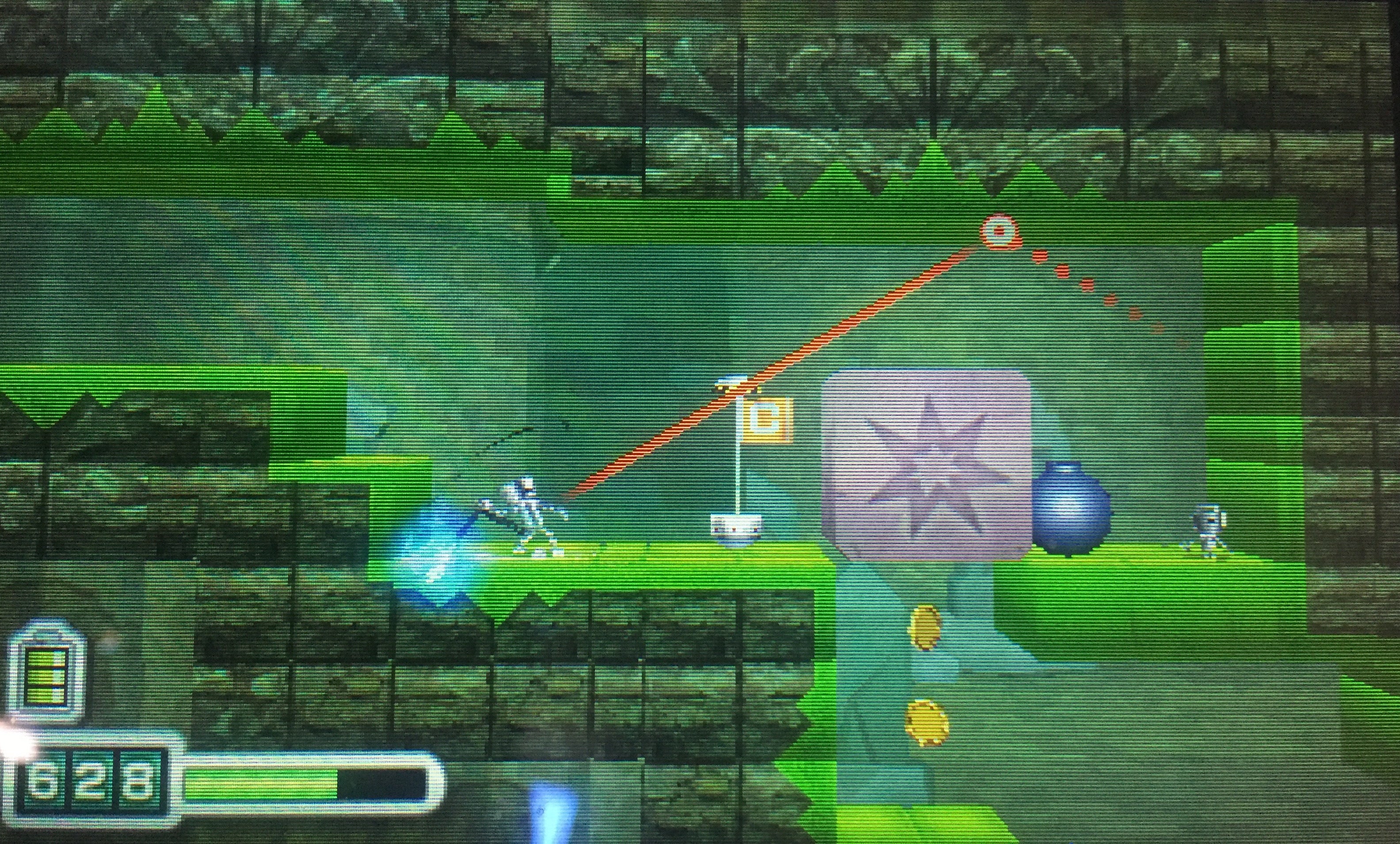 Most of the game's levels, unfortunately, are elementary. Players have to do more than just run to the right, but even an incurious player will find enough collectible tail-lengtheners to be able to meet each challenge as they play. Only one level in the game's few dozen levels displays the great potential of the game's core design. 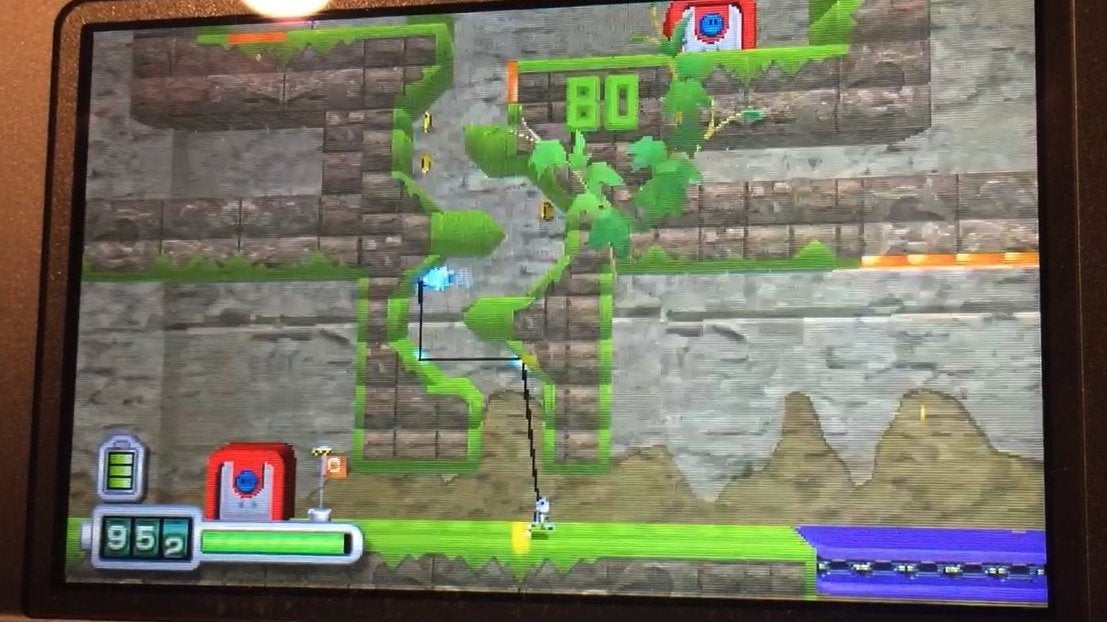 That level, the second in the game's fourth world, is set around the perimeter of a tower, on which each floor is marked with the required tail length needed to reach the floor above. This level hides some of its collectibles and makes it more of a challenge to amass enough to grapple to the next level. This one level realises Zip Lash's terrific potential as a distinct puzzle-based platformer — rather than just as yet another action platformer.

Nintendo-published games are often full of oddball design touches and they will elevate Zip Lash for those fans who appreciate games that make you wonder if they were designed sober. That helped this reviewer enjoy the lunatic Game & Wario. Here, you will have to be amused that our little robot can meet oddball characters who crave real brand-name snacks:

You will have to rejoice that Chibi Robo dances for these snacks:

And then you will think: damn, little guy, you're so cute and funny but your game still isn't that fun.

The game was made by two studios, Skip and Vanpool. Vanpool has previously done solid work on the Dillon's Rolling Western series, but it's Skip that really seems to have underachieved here. The studio made a wonderful, entertaining game about — no joke — folding boxes. Its Pictobits puzzle games is one of the best riffs on falling block games you can find and also one of the most stylish games that you can get on a Nintendo system. Skip's earliest Chibi Robo game, entitled simply Chibi Robo, was a heartfelt 3D game that was sort of Super Mario 64 meets helping-a-family-who-is-going-through-a-domestic-crisis; it's arguably the most mature game Nintendo has ever published (you can track it down for GameCube and Wii). 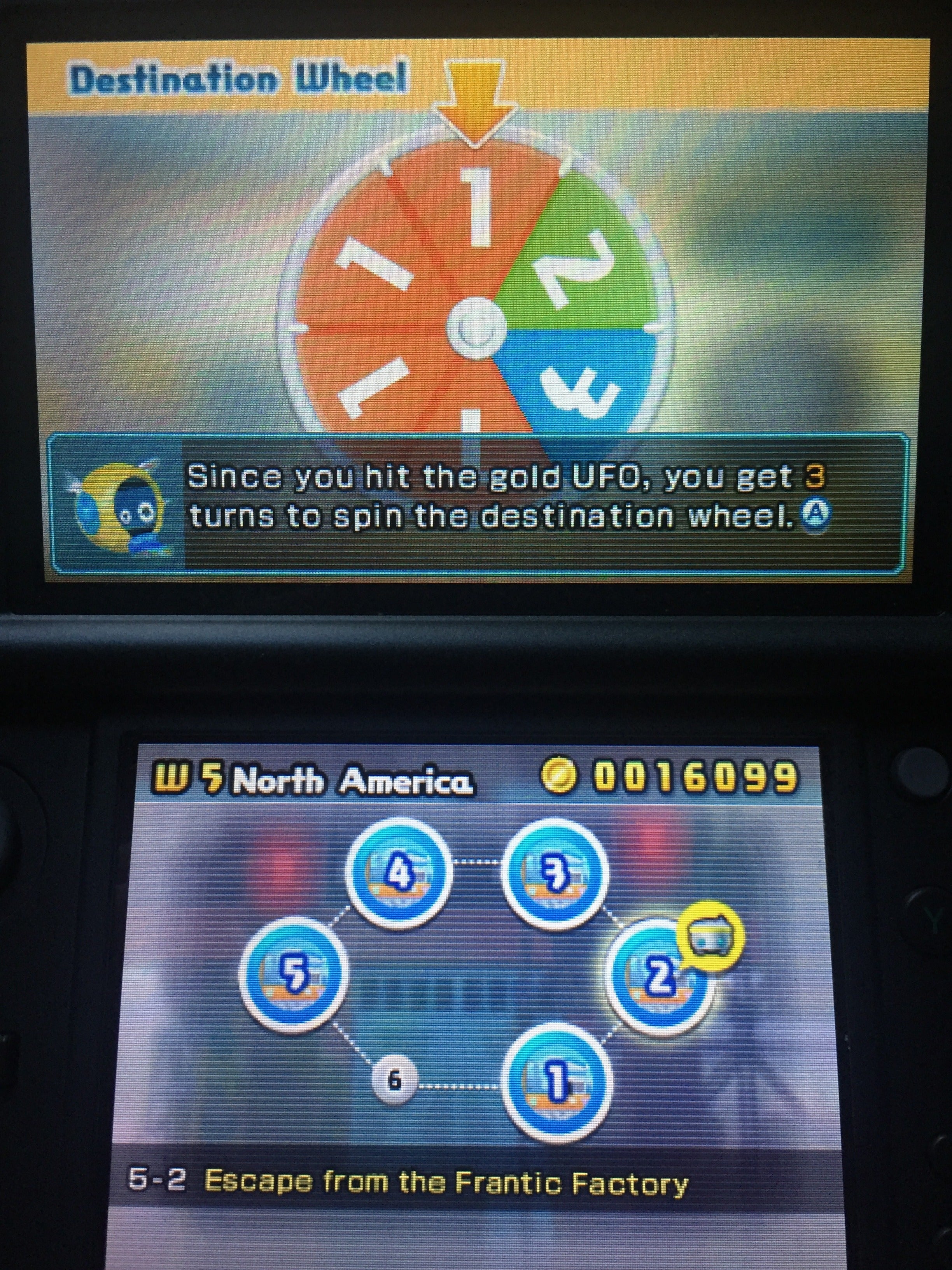 Studios as good as the ones that made Zip Lash should have known better than to make some of the bizarre design choices that mar the game. Take the wheel that players spin to select the next level. Unlike most other side-scroller games, players don't proceed from one level to the next. Instead, completing a level gives players a chance to spin a wheel to find out how many spaces they can move on a world map to go to another level. The number of spins available is based on whether players hit a bronze, silver or gold UFO with Chibi Robo's tail at the end of the previous level. The wheel is no big deal if it's sending you to a new level, but if your spin lands you on a level you've already played through, that would be a drag. But it never is a drag, because players can spend meager amounts of in-game gold to change the numbers on the wheel to increase the likelihood, all the way up to Absolute Certainty, that the wheel will finish spinning on the optimal number. 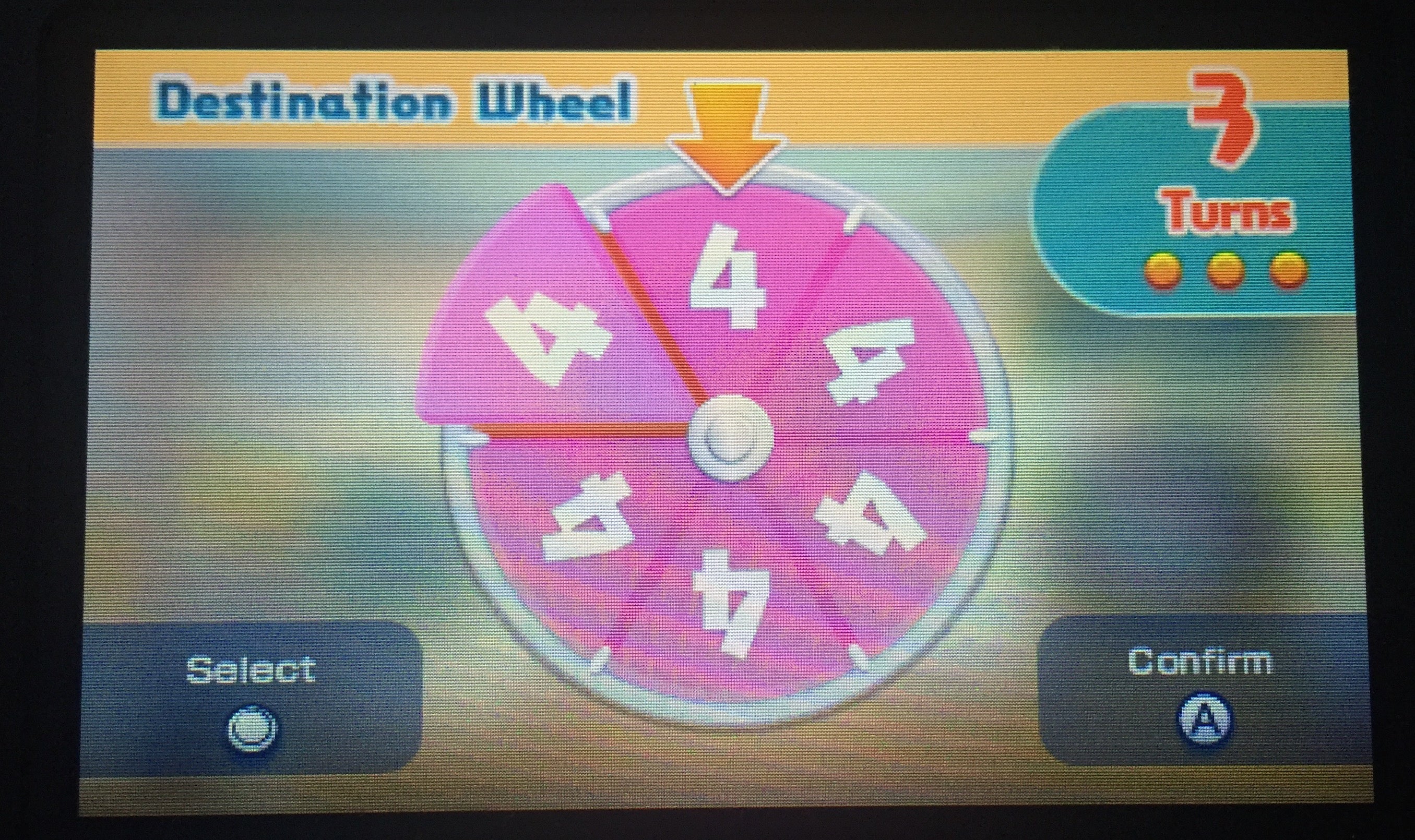 The developers deserve as many points for trying something new as they do for undermining their own idea.

The wheel is a weak idea, but it's not the game's worst design flaw. That's probably the fact that the game's few vehicle levels have to be restarted if you stumble in them, even though all of the game's on-foot levels merely knock you back to an earlier checkpoint in the level. At least you can pay in-game money to skip them.

The game is full of hints at something better. Background graphics appear to be intentionally and occasionally artfully rendered with very few polygons, flirting with rendering the world in a throwback Nintendo 64 art-style (or a modern Minecraft aesthetic, if that's your pleasure). 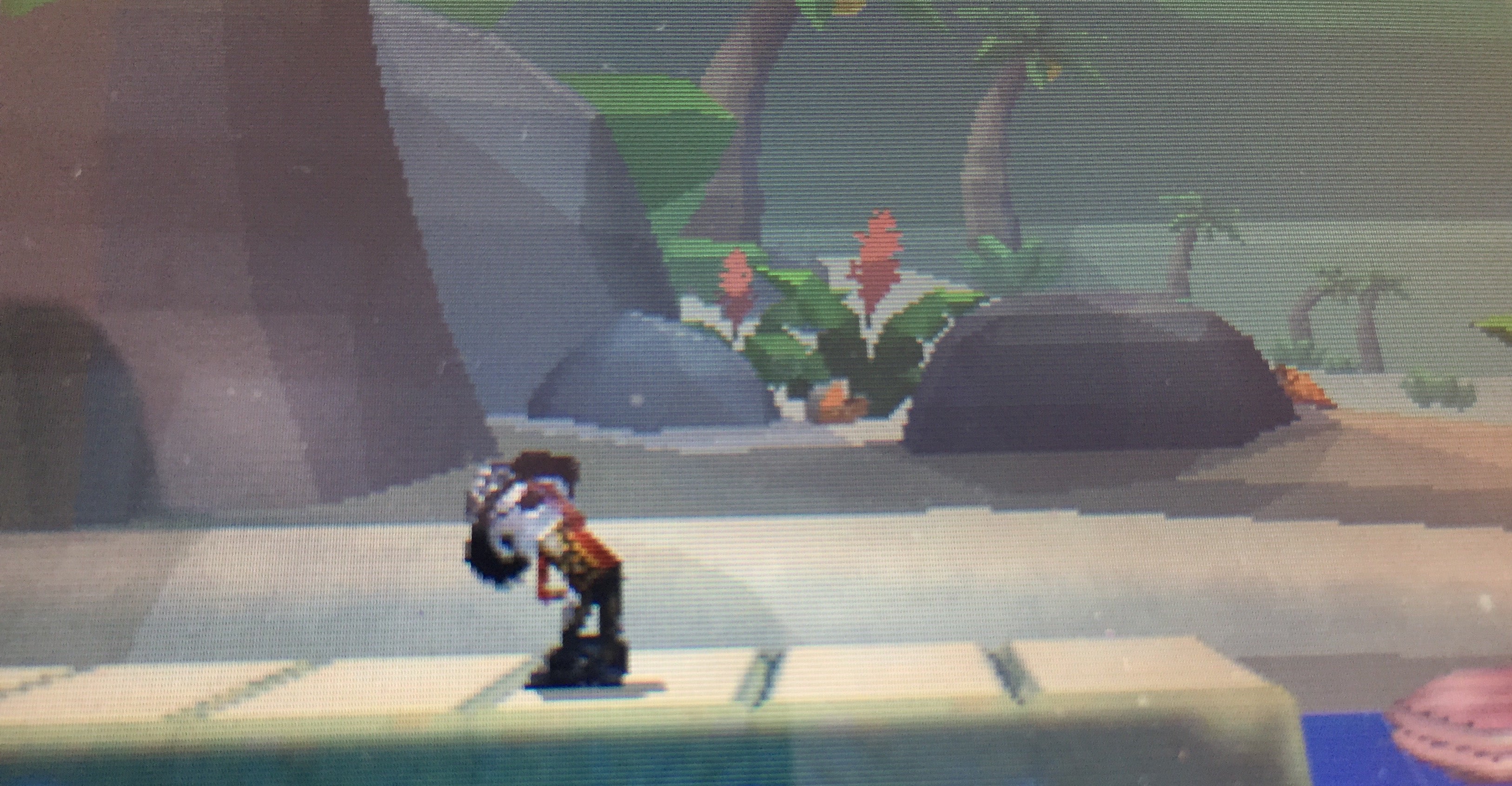 There are two scenes in which Chibi Robo parts a body of water as if he's Moses.

There are weird little chases for baby aliens that turn into innovative online multiplayer number-hunts that require a community of Zip Lash players to unlock the game's cute, locked outfits. 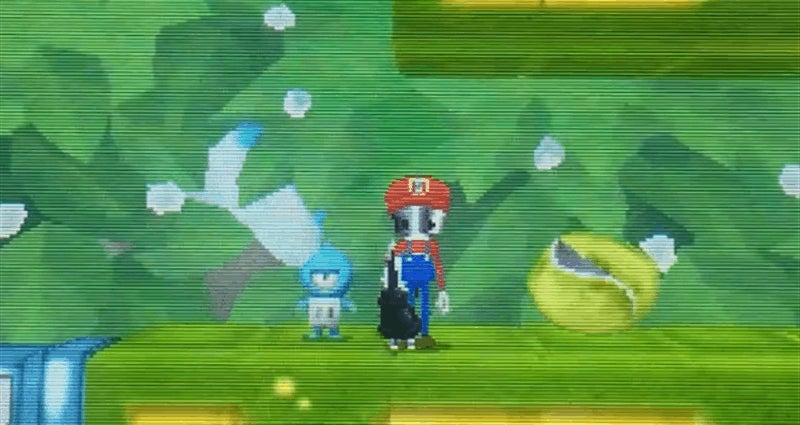 The best thing about Zip Lash is the Amiibo bundled with it. That little guy sure is cute.