An Overwatch Character Is Helping Me Enjoy A Multiplayer Shooter 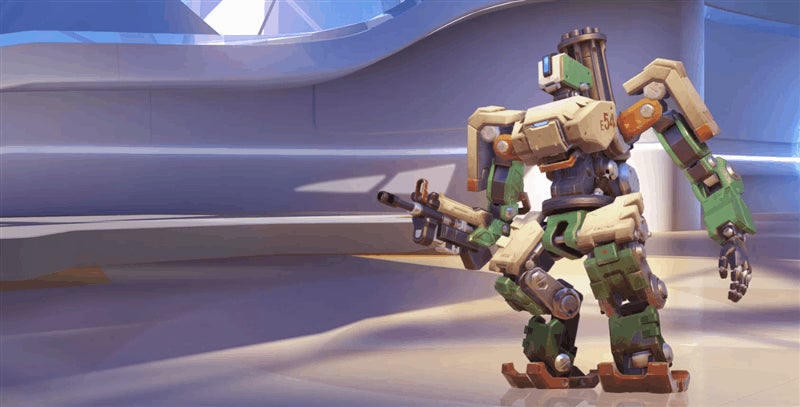 Overwatch, with its heavy MOBA influences, isn't like other multiplayer first-person shooters. And the more I play of the game, the more I think that's a very, very good thing.

The thing I've enjoyed most about Overwatch so far is how extreme it's been in designing its characters. With four distinct classes of combatant to choose from, Blizzard has gone to town with its cast, throwing out the FPS character design rulebook and creating a roster with some wild, wacky traits.

Many traditional FPS games are conservative (at least when it comes to their classes and characters) by their nature because they're designed from the ground-up within the confines of the genre. So when you look at a game like Team Fortress 2 — and you can bet Blizzard looked long and hard at TF2 while developing Overwatch — you see that while there are characters with unique and special traits, few outside the Medic and Engineer deviate too far from first-person clichés. And that's TF2, the gold standard in team shooters with unique and special traits.

Overwatch, on the other hand, tries to get as far away from the standard as possible, to the point where its most recognisably "FPS" combatant, the vanilla Soldier: 76, is almost a parody, the only character in a roster bursting with colour and weirdness to come without a name or a face.

I don't typically enjoy competitive multiplayer video games. Partly because I don't normally enjoy competitive gaming in the first place (I play to relax/escape, not compete), but also because I tend not to dig the gameplay required for those types of FPS experiences. The art and context may change, but whether it's Destiny's Crucible or Call of Duty's Nuketown, you're usually (warning: gross generalisation incoming) doing the same thing: running around like a maniac, never stopping, emptying clips into fleeting glimpses of the enemy.

It's all so frantic, and breathless, and just not usually the kind of way I like to spend a night unwinding after a day at work.

(Yes, there are exceptions to this, like Battlefield's vehicle combat, but Battlefield has always been a league apart from smaller multiplayer shooters).

In Overwatch, though, I don't do that. I mean, there are characters that would let me if I wanted to, but I don't. Instead, I have found Bastion, and in Bastion I have found happiness.

Bastion is a robot who can do three things. He can run around and shoot an assault rifle like a "normal" character, though he's a bit rubbish at this. His primary means of contributing to a battle is to pick a spot on the map, deploy a small frontal shield and...transform into a pretty powerful chaingun turret. After which he can't move.

(The third thing is that his Ultimate turns him into a tank).

So playing as Bastion is different. He's not about running around, jumping and strafing. Nor is he, for the snipers among us, about secrecy and patience. He's about knowing a map, knowing the flow of the battle and picking the best possible spot (and time) to deploy your turret and deal out massive amounts of death.

It's this strategic element to his character design that I love. When I'm playing as Bastion, I don't feel like I'm lost in the midst of a maelstrom of fire, a chaotic dance of rivals bouncing around exchanging shots and kills. I feel more like a surveyor, a calculated killer, someone who can find a battle, pick the optimal spot and rain death down on my terms.

Of course, he's far from the perfect character. While deployed as a turret you're immobile and generally unaware of what's going on behind and beside you. Couple this with the fact your shield only deploys in the front and you can see that Bastion is incredibly vulnerable to attacks from the side, especially if a rival team is coordinated enough to work together to flank you.

I've also seen a lot of players — and I suspect they might be MOBA newcomers given their preference for the word "turtling" — complain about Bastion's power, design and ability to self-heal, believing him (it?) to be a little OP, and a little too reliant on memorising a handful of the "best" spots on the map. A silly complaint, since as I just mentioned he's easily flanked (and that there could be 100 "best spots" depending on the position of battles), but the complaint remains (and when it comes to the self-healing thing, is kinda valid, because it does feel a bit much).

I don't want to make out like Bastion is the only Overwatch character shaking up the way players approach a multiplayer shooter. Reinhardt's giant shield is fantastic as well, and even changes made to more traditional player roles, like the sniper Widowmaker's grappling hook and scoped "lockdown" effect, will challenge people to find new ways to play an old genre.

But for me, Bastion is my guy. He's letting me enjoy a type of game I haven't enjoyed in a long time. A cynical view of Overwatch so far has been that it's simply trying to apply MOBA mechanics to a team-based FPS, but if by getting crazy with its character designs means it can also change the way anyone — MOBA player or not — can approach and enjoy a game like this, then it deserves a lot more credit than that.