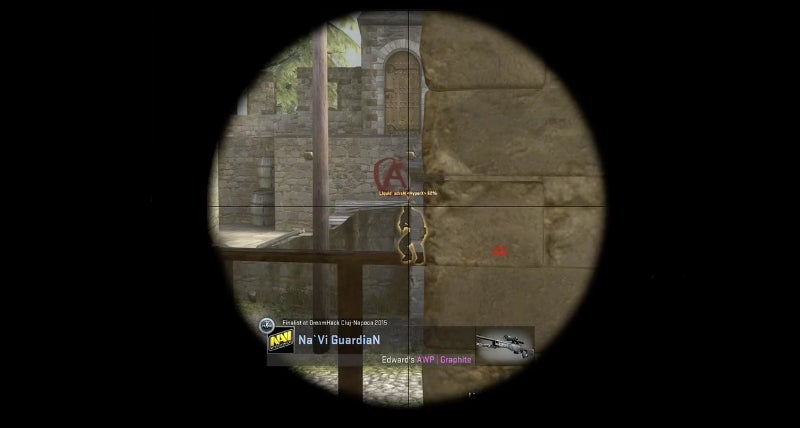 The weekend's IEM San Jose Counter-Strike tournament was full of great moments, but one shot rang louder than the rest. The reason? It seemed goddamn impossible.

The moment came when Ukrainian team (and eventual tournament winners) Na'Vi faced off against beloved-by-the-crowd North American favourites Team Liquid. Na'Vi's star AWP-er (someone who specialises in Counter-Strike's notoriously slow yet powerful sniper rifle, the AWP), GuardiaN, rounded a corner and took a look at the A bomb site. Team Liquid's adreN was huddled behind a barrier to the point that he should have been impossible to see, but — seconds after peeking out — GuardiaN fired off a shot that pierced the wall and killed adreN. The crowd went ballistic because, seriously, how the hell did he even do that? How did he know?

Initially, fans and pundits feared that GuardiaN had shown his red-stained hand, revealed proof positive that he'd taken up the dark art of cheating. But that seemed uncharacteristic, to say the least. So people started digging deeper.

The next factor they considered was the crowd. Thanks to CSGO's spectating tools, they could definitely see adreN crouched behind that barrier. And sure enough, when they noticed GuardiaN's crosshair indecisively hovering over adreN's position, they started to cheer. Could that have tipped GuardiaN off, encouraged him to take a seemingly random shot?

Maybe. But that, too, seems unlikely, given that GuardiaN was already zooming in to take the shot before the crowd started cheering. That brings us to the next question: why did he zoom in the first place? What was he looking for?

An astute fan going by the handle Greenhound has provided the most compelling (and probable) theory. They grabbed a shot of what GuardiaN (rather than spectators) was seeing at the time, and it reveals that he was able to see adreN's name tag as though his cursor was on him, even though there was a wall in the way. It's a glitch, but it does happen from time-to-time in CSGO games. Couple that with the fact that AWP-ers as high calibre as GuardiaN put painstaking study into knowing every spot opponents might be hiding — every shot they might be able to take — and it seems like GuardiaN realised there could be someone hiding there and, aware of a fairly common CSGO glitch, zoomed in to hunt for a nametag. The second it appeared, he took the shot.

While that's easily the most plausible suggestion anyone's made so far, it's not a sure thing. I've reached out to Na'Vi to find out what was going through GuardiaN's mind when he took that shot. In the meantime, what do you think happened there?