There’s been a running joke among Heroes of the Storm players about what happened to the snazzy-looking Vulture mount. Blizzard announced it in September, but never released it. Did it disappear? We wondered. Was it incurably bugged? Today Blizzard confirmed the mount does still exist, but getting it will cost you.

In a patch today for Heroes of the Storm, Blizzard added a new “recruit a friend” feature that’s designed to encourage current HOTS players to rope their friends into the game and, if all goes according to plan, keep them there. It works like this: you send your friend a “unique recruitment link”. If they accept your invitation, you can play together. Or separately! It doesn’t specify. 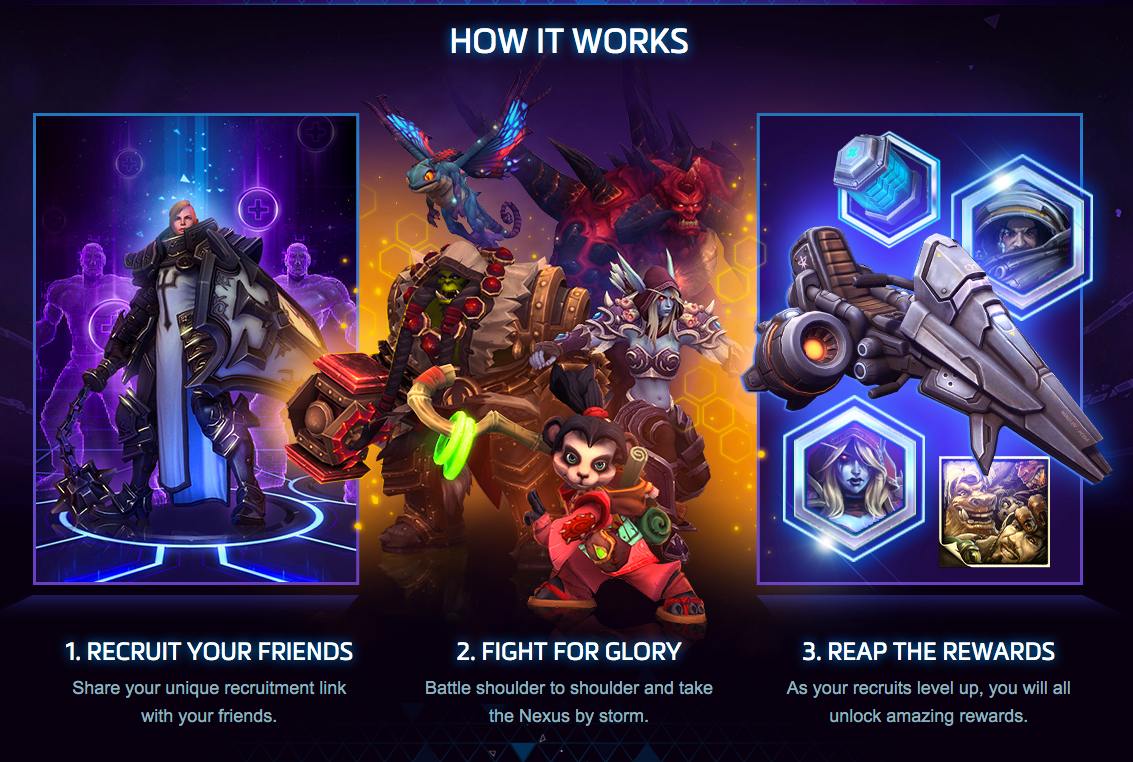 The one thing that matters, rewards-wise, is what level they get to.

If one of a player’s recruits makes it the level ten, the recruiter is rewarded with a special “Recruit A Friend Portrait”. If a player recruits four people to start playing HOTS and then all of them get to level 10, the player will get the vulture mount.

The recruitees, meanwhile, get Raynor and a five-day stimpack (think: experience and gold boost) for free from the start, and unlock Sylvanas, plus the Recruit A Friend portrait, at level 10.

I’m calling bullshit on this. Not the referral system in and of itself — I think it’s usually a good thing when big multiplayer games, especially ultra-competitive ones like MOBAs, encourage people to play together with friends. I’m not even necessarily opposed to the idea of incentivising referrals with in-game rewards. The part that is bullshit is the way that Blizzard is gating off people’s access to the vulture mount.

The vulture mount isn’t just a normal mount in Heroes of the Storm. HOTS and StarCraft fans have been asking for a mount based on the iconic Terran unit for at least as long as I’ve been playing the game. It’s one of those things that just seemed like a natural and perfect fit, given the fact that vultures already look like futuristic snowmobile type things. It was finally confirmed for HOTS at the end of September along with a number of other impressive priced character skins and mounts. I should note that all of the other skins and mounts in that announcement have since been released and made available for normal purchase.

Blizzard actually started teasing the release of the vulture mount two months ago when it added it to AI games, so players would end up seeing it in action if you played against bots. Reddit’s Trasko spotted on in the wild that was being ridden by King Leoric: 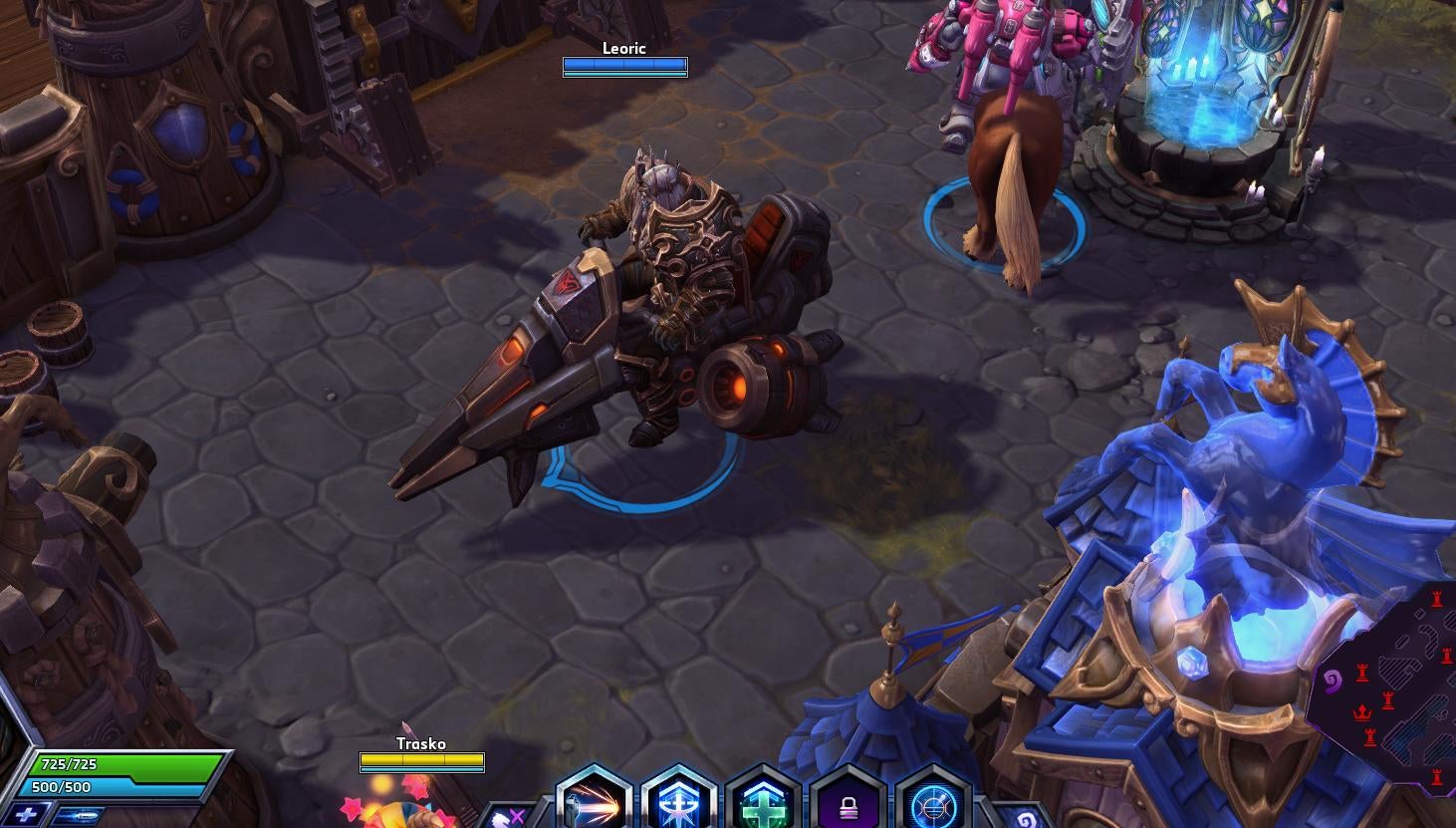 Unlike other exclusive and not-available-for-normal-purchase mounts like the Diablo III treasure goblin mount (which was only available for a limited time) or Zeratul’s “Void Speeder” ship from StarCraft (which was only available for people who pre-ordered the deluxe edition of Legacy of the Void), Blizzard never said that they were going to limit the availability of the vulture mount prior to today’s reveal. I don’t know what changed in the past two months since the mount was first shown off, but it’s clear what Blizzard is doing with it right now: they’re trying to use their player-base’s pre-existing interesting in something that’s genuinely unique and interesting to help kickstart a new initiative they just decided to launch.

I suppose that content-gating like this is as ubiquitous in the game industry as it is shitty. World of Warcraft has regularly used these sorts of exclusive in-game items to encourage WoW players to get their friends to sign up. Bungie has made specific Destiny emotes exclusive to players who recruit their friends.

Incentives like these are gross. Modern games already demand so much of their players’ time and energy that asking for their friends’ commitment as well is just kind of…inconsiderate. What makes it particularly frustrating in this instance is that convincing four people who haven’t already drunk the HOTS Kool Aid to start playing something as idiosyncratic and often off-putting to newcomers as a MOBA, let alone getting them all to level 10, is an extremely tall order.

You have to play a lot of games (your specific mileage may vary) to get to level 10; it’s a third of the way towards reaching level 30 and playing in the game’s ranked mode. As an exasperated fan already put it on the HOTS subreddit, it creates a system that’s begging to be gamed by people willing to create alternate “smurf” accounts.

And what about the diehard HOTS fans who’ve given more of their time and energy to this game than anyone else? I have several friends who’ve been playing HOTS since the alpha or beta, have played hundreds and even thousands more games than I have, who feel justifiably bummed that they’re losing out on a highly prized community simply because, at this point in their HOTS career, they have probably convinced everyone they possibly can to start playing the game.

HOTS director Dustin Browder did respond to one such player’s inquiry on Twitter saying that he’s “very sorry” to longtime players, but he ultimately believes that “it is good for the long-term health of the game.”

@TaylorGorder Very sorry to our veteran players. =( We did get this in late. We believe it is good for the long term health of the game.

Encouraging people to play HOTS with friends is an admirable goal. But there are healthy and productive ways to do so, and then there are profoundly lame ways to monetise all that precious content. Closing off a particularly snazzy piece of content players already knew about and really, really wanted isn’t a particularly classy way to motivate people to do anything.

Blizzard has come up with smart ways to incentivise socialising before, like the way they have made people play with one another in order to unlock the new two-player hero Cho’Gall. The vulture mount just isn’t one of their brightest or most respectable ideas.

On a more positive note, today’s Heroes of the Storm patch did increase the free hero rotation to ten, and removed its annoying and unnecessary talent-gating, so there’s good to be found as well.