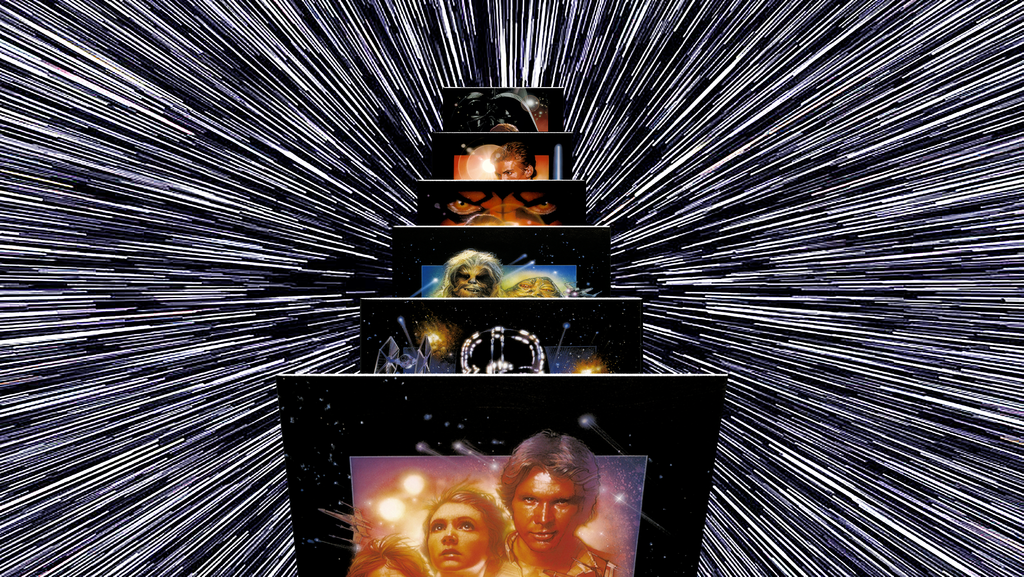 The seventh Star Wars movie comes out this week (seventh!) and if you’re feeling a little behind, don’t worry: here’s how to catch up on the first few movies before the latest instalment drops.

Which Movies Should You Watch?

There are six movies in the Star Wars series so far, and for some of you, watching all six may seem like a pretty serious commitment. Especially when you’ve spent the last 10 years hearing people badmouth three of them.

We don’t know yet which ones will be “necessary” to understand the story of The Force Awakens. In fact, it’s entirely possible that you won’t need to watch any of the old movies movies to understand this new one. So if you’re dreading the idea of a 6-hour Star Wars marathon, go ahead and skip them.

That said, it’s clear that The Force Awakens will be drawing on a lot of material from the original trilogy from the ’70s and ’80s — also known as episodes 4, 5, and 6. It takes place after the events of those films, and many characters from those films will be returning, so if you want to know why everyone gets nostalgia-gasms when Han Solo comes on screen, the original movies are key. Just keep in mind: the original movies move at a much slower pace than most modern movies, so don’t get discouraged if the movie isn’t rife with explosions and a racing plot in the first half hour.

So what about the newer trilogy, containing episodes 1 through 3? Watching that is up to you. I’ll steer clear of making formal judgments on their quality, but because they’re prequels, they’re less important to the story. The original trilogy was designed to be told without intense knowledge of the prequels, so they’re more like world-building pieces. They explain more about the nature of the Jedi, the politics that led to the empire, and how Darth Vader became Darth Vader (and there’s a love story in there somewhere, too). If you’re really interested in the world of Star Wars, go for it — but it’s unlikely they will be necessary to understand The Force Awakens.

Which Versions of the Movies Should You Watch?

Every time they re-release Star Wars — in theatres, on DVD, on Blu-Ray — they make changes to the movies. The current version of the trilogy contains some extra CGI, a deleted scene or two, and even one change that alters Han Solo’s character. So, you may have heard a lot of debate about how the Blu-Rays suck, or how the true movie is lost to time, and other things of that nature. So which version should you watch?

If you just don’t care, pick up the Blu-Ray version. If you don’t have a Blu-Ray player, the DVD version is fine too. It’s also available for streaming on Google Play. Most of the big, controversial changes were made in 1997, which means there’s no easy way to watch the original versions unless still you have them on VHS.

If, however, you’re a tech-savvy individual — and you want to watch the original, perfect version of the Star Wars trilogy — you should absolutely check out the Despecialized Edition. It is a fan-made reconstruction of the original trilogy in all it’s unaltered glory — and in high definition. This is the best version of Star Wars you can watch today, provided you’re willing to do a little hunting.

Since it’s an unofficial fan edit, the legality of them is in a definite grey area, and they aren’t easy to find. You’ll have to go through a somewhat lengthy process to download them from their creator, or search a few BitTorrent sites for “despecialized edition” to find all three movies (don’t forget to use a proxy or VPN to anonymise your traffic). You’ll be glad you did.

Similarly, there are some re-edited, anti-cheese versions of the prequels if you want to save yourself some time and headache watching those.

What Order Should You Watch Them In?

Option One: Chronological Order. If you’re a fan of Star Wars, and you’ve seen the movies more than once or twice, you can feel free to watch them however you want. George Lucas says he intends people to watch them in chronological order (1, 2, 3, 4, 5, 6), and if you’re already familiar with the story, it’s a decent way to watch it all unfold.

Option Two: Release Order. If you’re new to Star Wars, or if you haven’t watched it in a long time, I do not recommend option one. The original trilogy is a better introduction to the series, even if you’ve seen it once or twice before. And if you’ve never seen Star Wars before, there are a few twists that the prequels will definitely give away. So watch the original trilogy first, then watch the three prequels afterward (4, 5, 6, 1, 2, 3).

Option Three: Machete Order. There is one other option, suitable for old and new viewers alike, known as Machete Order. Popularised by blogger Rod Hilton, Machete Order involves watching the original Star Wars and Empire Strikes Back first, then watching the prequels before finishing it all off with Return of the Jedi (so that’s 4, 5, 1, 2, 3, 6). This introduces you to the universe through the original trilogy, but cuts it off after the cliffhanger in Empire Strikes Back — at which point you “flash back” to the prequels to see how Darth Vader came to be Darth Vader, before returning to the final chapter of the original trilogy for a nice, neat ending.

Technically Rod’s Machete Order argues that you should skip Episode 1 entirely (4, 5, 2, 3, 6), and gives a decent argument for doing so. I’ve left it in above to avoid confusion about where it would go, so it’s up to you whether you want to include it. If you’re really into Star Wars, read Rod’s blog post for more info. It’s pretty interesting, and a decent attempt at getting the best of both worlds.

Other Star Wars Stories to Catch Up On

If you’re such a Star Wars geek that six movies aren’t enough — supernerds unite! — there are a bunch of other Star Wars stories that take place in between the movies. The Clone Wars television show, for example, chronicles events between episodes 2 and 3, and the Rebels TV show takes place between episodes 3 and 4. There are also quite a few books, comic books, and short stories entitled Journey to The Force Awakens that take place before the latest movie. You can see a full list of “canon” stories throughout the Star Wars universe here. However, none of this is truly required to enjoy Star Wars or The Force Awakens — it merely adds to the story for true, diehard fans.

If You’re Too Lazy for All of This

If all of that sounds like too much work (I’m surprised you made it through this article), just watch this video. Or watch this more serious and descriptive one, if you have a few more minutes to spare.