The HoloLens headset from Microsoft is the world’s first untethered wearable that generates holograms before your eyes. It’s been nearly a year since we first strapped a prototype to our faces, and as the tech goliath prepares to unleash a first batch of units to developers in the coming months, I was invited to check out just how far the technology has come. Holograms are here people — and they’re going to change your life.

As a kid who grew up with a hand-me-down rabbit-ear TV and a rotary phone, I sometimes wonder if modern-day reality is actually a Jetsons-like, cyberpunk, Truman Show scifi whose clandestine cameras I’m completely oblivious to. Well, I had one of those moments earlier this week when I tried out HoloLens for the very first time, and the work Microsoft put in is evident. Sure the experience is still occasionally glitchy, but make no mistake, it’s very cool. Between improvements seemingly made since our last hands-on, and after playing Microsoft’s recently debuted augmented reality video game, I’m convinced: We’re entering the age of the hologram.

Plus? Starting today, Microsoft’s letting developers flock to their flagship store in New York City to try out the same demos I did a few days ago. I’ll go through ’em one by one. But first, let’s talk about the HoloLens’ progress.

Here at Gizmodo, we’ve had hands-on with the headset before. And there are still a few pitfalls that still exist: The field-of-vision is still narrow, meaning you can only see holograms directly in front of you. The headset still feels a bit top-heavy. And the adjustment wheel on the strap that goes around the back of your head snags your hair while you rotate it to tighten the thing onto your head. Not pleasant.

But, there are many improvements! I didn’t see any of the distracting rainbow-like effects at the corner of the goggles, as we did in a previous hands-on opportunity. I also didn’t notice any reflective objects in the room bouncing back light that distracted from the illusion — instead, actual objects looked actual objects, and the holograms looked like holograms. And, while I didn’t participate in previous Gizmodo firsthand tests, I didn’t think that you had to move your head too much in order to move the “cursor” that floats in front of your eyes to select menu items, as we previously reported. All those items were compact, and required minimal noggin tilting, in my opinion.

One huge update? We got to play Project X — now called Project X-Ray — for the very first time. That’s the dope-as-hell AR video game that was demoed on stage back in October. Slip HoloLens on, and malicious alien robots tunnel through your breakfast nook’s walls and unload lasers of doom at you. It’s your job to gun ’em down. It’s Halo meets laser tag.

In the game, enemy alien robots explode through the real walls in the room in AR, leaving you to physically scramble around the room to track them down, physically manoeuvring to avoid their beams. There were a couple moments when I felt like the image signal flowing before my eyes was kind of weak; like, the AR images were kind of faint and flickery. Overall though, it was intuitive to use with the handheld controller that was provided. The actual gameplay was precise and responsive, as well. Foes disappeared as soon as they were hit, with the same instant feedback you’d find in a traditional video game.

You might be wondering, how’s this any better than virtual reality? It’s a good question! To me, virtual and augmented realities are apples-and-oranges. While VR is like being cocooned in an 360-degree IMAX planetarium, AR blurs the line between the actual and the virtual worlds more than VR does. It’s just a different kind of fun to see bloodthirsty extraterrestrials orbiting your buddy’s head in real life, or ploughing through your family portrait from ’91 hanging on your parents’ foyer wall and then opening fire.

I’ve truly never played a video game like Project X-Ray before, and so long as Microsoft can make the experience glitch-and-gimmick free, the creative opportunities for developers are limitless. Imagine swinging an AR golf club in your backyard and seeing a holographic golf ball rocket into your annoying neighbour’s window, or setting off holographic fireworks into a night sky.

I will say that, out of all three of the HoloLens demos I was treated to, Project X-Ray was by far the glitchiest. Granted, the action was all extremely frantic: Enemies buzzed around me constantly and quickly, which required actual dodging and hopping and pivoting to parry their unending sortie. During all that, it was sometimes hard to keep track of them all, because the holograms of my robotic flying foes got weak, started flickering, or were hard to follow in that dinky field of vision.

But Project X-Ray was also the newest of the three demos! It was just revealed back in October, so it’s understandable it’s less polished. Let’s talk about the other two demos — which were, largely, bug-free, and looked freaking fantastic.

Reminder: With HoloLens, the “cursor” is your eyes. You look around the real room you’re in and select holographic images that appear in your goggles by hovering the cursor in the middle of your field of vision over the object. To interact with the object, you “air tap.” In front of the goggles, point your index in the air and then make a fast swipe down motion. Voice commands are also at your disposal.

So, onto the second demo: Holographic storytelling. The idea here is that you can replace godawful PowerPoints with holograms. In this case, I stepped into a fictional boardroom pitch for a luxury watch. I looked at real table in the demo room and saw a large hologram watch blown up to the size of a golden retriever. It was a little glitchy — I think it was supposed to be directly on the table like a real watch would sit, but instead the image was really off-center and appeared along the edge of the table. 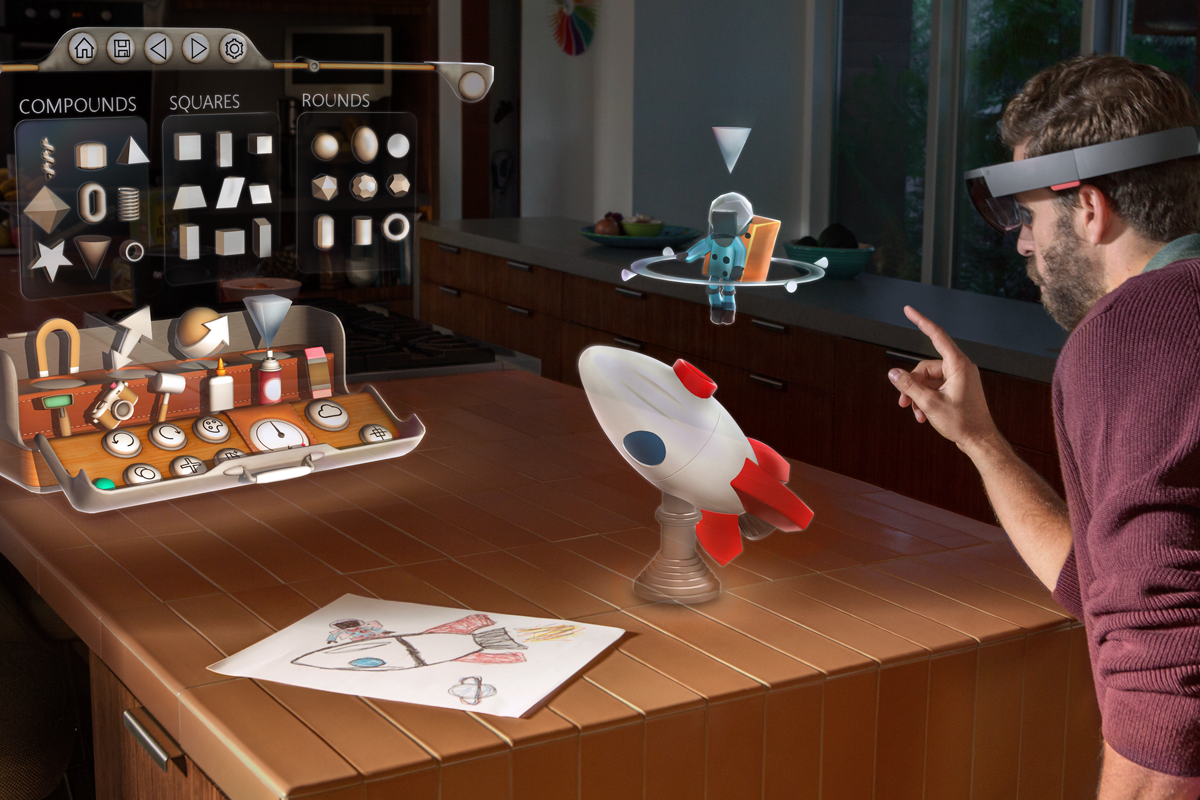 From there, I could move the cursor with my eyes to different points of interest on the watch: “Here’s what the links are made of,” for example, or info about the battery. The really cool thing about this, from a business presentation standpoint, is that you can actually see where your audience is looking at the hologram — assuming they’re also wearing a HoloLens set, that is. You can transform your hologram so that it looks like a heat map: The redder parts of the “object” are where more people look. In my case, the big watch face was a focal point for my hypothetical audience, so I was able to use that data and go in and add an interest point that provided a factoid about the face’s composition.

And, for the final demo: HoloStudio. Here, you can download a 3D project you’ve already worked on on a computer, for example, and then create a hologram out of it — and then tweak it in augmented reality. When you’re done, you can send it back to your computer, a 3D printer, and more.

The first thing you have to do, before you turn the real room into an AR workshop for 3D holograms, is “scan” the space. This tells the software where you can place your finished creations in the real room. For example, you’ll be able to stick your homemade AR sign on a wall next to a real-life painting, or on an odder shape, like the top of an end table or the side of a sofa.

My demo consisted of a cartoony, underwater dive scene inspired by Hawaii. There were small blue fish, a couple of human divers, sand, lots of coral, plants, anemones, that kinda thing. At first, it was a tiny, diorama hologram — but I could blow it up so that it filled the room, and I was among the underwater scene. I could then use my eye-cursor to select one of the fish, copy and paste him around the vignette, and even blow one of them up to pony-sized proportions. In another scene, I was able to spray paint a Star Wars X-Wing orange. These projects can be saved and sent to you later.

All in all, I can honestly say that this was unlike anything I’ve experienced before. There’s still plenty to be sceptical of: That peskily narrow field of vision needs to be made way bigger to achieve the same level of immersion as VR — that still hasn’t changed, and needs to be addressed. And the quality of the holograms themselves, as well as the accuracy of their placements in the rooms, were at times unreliable and inconsistent, so that needs work. Plus, HoloLens will only be available to developers and commercial buyers in North America for $US3000 ($4162) a pop in quarter one of 2016, so it will be a while before it’s even available to Joe Schmoe consumers like you and me.

Until then, know that holograms are here, and that some of the biggest tech companies on planet Earth are working to get them in our hands — even the ones that are staticky and flickering. As my colleague Brent Rose said: “I’m so glad I lived long enough to make it to the future.” Me too, dude.

Bryan is a staff writer at Gizmodo and covers technology.