For the last few months, video game website GameFAQs has been hosting a huge poll called “Best. Game. Ever.” It has the sort of games you’d expect in a debate like that. Classics like Super Mario World, Pokemon, and Final Fantasy. And then there’s Undertale.

Altogether, the Best. Game. Ever poll has 128 video game entrants. Every day, GameFAQs posts up to four different polls pitting two different games against each other in 1-on-1 battles. The more votes a game gets, the more battles it can win, and the further along the showdown it can go.

Here’s GameFAQs, on how the entire thing will go down:

The games have been seeded by a combination of user nominations, popularity on GameFAQs, and critical and user game ratings, but don’t forget: This is not a contest to see which game is your favourite, or even which one is the best rated. It’s all a big popularity contest, and visitors who have never visited GameFAQs before will be sure to stop in and vote.

Basically, the website is pretty upfront about how unscientific and for funsies the entire thing is. But, this being the internet, we all know just how heated people can get.

Since its release, Undertale has been kicking a lot of arse — you can regularly spot the humble little RPG on Steam’s “Top Seller” list. More anecdotally, I’ve never seen a game this young command so many dedicated fans: there is Undertale love, particularly Undertale fanart, everywhere. It’s really heartening, given how young the game is.

Fascinatingly, Undertale hasn’t just been performing well in the GameFAQs polls. It’s demolishing the competition, even when it comes to games that are considered sacred by the hardcore gaming community:

This, in turn, has made some people furious. Among dissenting voters, there’s this belief that there must be something fishy going on here. That there’s no way Undertale deserves the highly prestigious distinction of winning a GameFAQs poll.

If you go to the Undertale forums on GameFAQs right now, you can read threads like these: 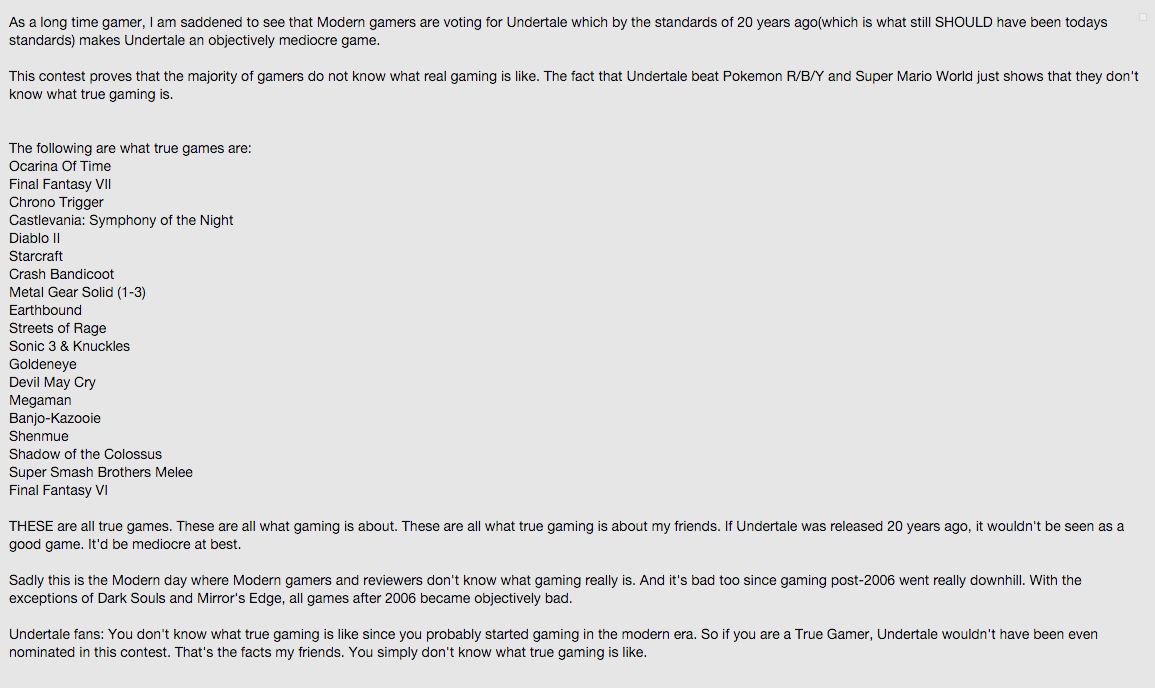 That’s just from today. These arguments have been going on for weeks now, and they have gotten bad enough that the Undertale subreddit has had to shut down discussion of the polls. Fandoms for all sorts of different games, many of which aren’t even in the same genre, have been arguing endlessly because of how well Undertale is performing on an internet poll.

People have even turned to bizarro conspiracy theories, blaming the game’s popularity on ‘social justice warriors’ or ‘furries’ who are banding together to steal the thunder from games that actually ‘deserve’ it. I asked our resident Undertale expert, Nathan Grayson, on why people consider Undertale an ‘SJW’ game in the first place, and he pointed out the following:

This of course just makes things confusing, because it essentially means that people hate the game because it tries to be nice….? Uh, sure.

The mischievous part of me kind of wants Undertale to win the whole thing, just to see what would happen. The other part of me remembers that this is a dang GameFAQs poll we’re talking about. Regardless, this situation demonstrates that Undertale’s success hasn’t just gained it a ton of adoring fans; the game now has a lot of haters, too. Truly, Undertale has arrived.