After Years Of Injuries, One Of The UFC's Most Intriguing Fighters Is Back 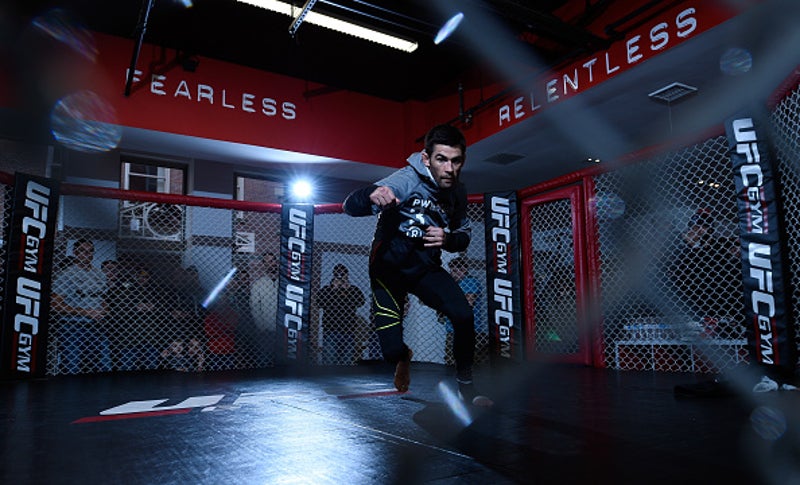 This weekend's UFC fight has been four years in the making. Dominick Cruz pioneered a nigh-untouchable Matrix-like fighting style and dominated a whole division with it. Then he got injured. For years. While he was away, TJ Dillashaw claimed his belt with remarkably similar moves. Now, they're finally gonna fight.

I've written about TJ Dillashaw and his reinvention from solid but unremarkable wrestle-brawler to fleet-footed Lord of the Dance (that one dance with punches, to be specific) before, but to sum up: he managed to dismantle a terrifying champion he wasn't even supposed to be in the octagon with using gorgeously crafty footwork, feints, and movement. It was a huge upset, one of those moments you watch MMA always secretly hoping to see. Seriously, watch this man work:

That movement. Dillashaw's constantly striking from angles you've practically gotta crane your neck to see, dancing between stances to keep his opponents guessing, and appearing where they absolutely do not want him to be, like some kind of fistic phantom. It's a joy to watch. When he finds his rhythm, there's an incomparable smoothness to it. Fighters like Dillashaw put the "A" in MMA.

So you know that? Like, all of that? Dominick Cruz was doing it years before Dillashaw even thought to try, dancing literal circles around people like Dillashaw's longtime training partner (and current rival because Reasons) Urijah Faber before Dillashaw was even in the UFC. Observe:

He's been seriously injured in some way or another for the better part of four years — first from fights, then from training and the strain of his hyper-active movement style. That stuff hella adds up, especially when your knees are involved. Many fight fans wrote him off entirely, even as his shadow loomed heavy over the UFC's bantamweight division. See, Cruz never actually lost his belt. Injuries just kept him out of action for so long that the UFC had to strip him of it. In a way, he's still the rightful champion. And, against all odds, he looked better than ever in his brief return in 2014. He has, however, been back on The Boulevard Of Broken Knees ever since.

Cruz's bantamweight title reign was a thing of frustrating beauty. It was beautiful because, I mean, just watch. The man peddles around the octagon like he's on an invisible bicycle (can the UFC test for that?), and his counters are timed in ways that speak delicate, loving poetry to the human id. In the above video, I adore the way he baits Faber by faking an uppercut until he disregards it, then nailing him with the very same uppercut as soon as he charges in. That uppercut says, "Hahaha, you total IDIOT. Did you seriously fall for that?" When people get beat by Dominick Cruz, they're basically on the receiving end of slapstick comedy. Sometimes, it's hard not to laugh.

Cruz's reign was frustrating as a byproduct of its beauty. The way he moved around his opponents and picked them apart — the relative ease of it all — contributed to a general lack of drama in his fights. People sometimes said he was on "Cruz control." 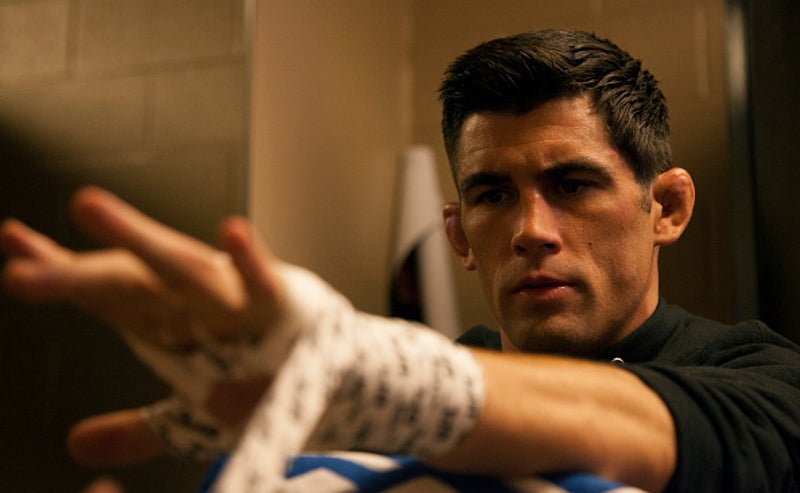 Now, let's get something out of the way: he wasn't. Cruz's style is incredibly taxing on the mind and body. That level of constant unorthodox movement is exhausting; he's practically running a marathon in there — while also fighting, you know, a fight. Ultimately, the strain his style put on his knees is what took him out of the fight game for so many years.

But still, people began to tire of this confident (some would say arrogant) dude who talked a big game, but hardly ever finished anybody. As he won decision after decision, people began to feel like he was just toying with people — playing with his food — instead of being the truly dominant champion he could be.

In truth, Cruz's fighting style is just defensively minded. He often strikes while moving (instead of moving and then putting full directional force behind strikes), which saps his attacks of their full power. (You should absolutely check out Jack Slack's excellent in-depth breakdown of this stuff here.) Dillashaw, by comparison, applies his crazy movement in a more offensively-minded fashion. While Cruz darts in and out, finding comfort in range, Dillashaw enjoys taking angles up-close and even firing out of the pocket. He gets hit more, but there's a reason all of his title fights have ended with finishes. In that way, Dillashaw almost represents what people wanted Cruz to be: a fighter with mesmerising movement and voracious hunger for big knockouts.

When Cruz returned in 2014, he viciously massacred a very game Takeya Mizugaki. Cruz encircled him with movement, spinning a web of devious calculation. Then he struck. One massive takedown and a barrage of strikes later, Mizugaki was presumed dead by most viewers and several doctors (disclaimer: this is hyperbole; Mizugaki is still alive). In that fight, Cruz seemed to have figured out how to meld his defensive striking with a more offensive wrestling game. He's always been an excellent wrestler (it's arguably better than his striking), but he's never finished someone like, well, that.

I can understand his aggression. Imagine being one of the best fighters on Earth, only to lose your belt and your career for the better part of four years due to stupid, nagging injuries. Imagine how much you would want to fucking punch somebody in the face about it. So Cruz is reinvigorated. He's hungry. He's angry.

What all of this means is that we're in for a crazy fight. After all these years, will Dillashaw finally wrench the bantamweight torch from Cruz's dead hands, or will Cruz prove that Dillashaw was only a pale imitation of him all along? Who'll move better? Who'll implement a craftier strategy? Will offence or defence prevail? Will Cruz be able to take down Dillashaw, a man who's never been taken down in UFC competition? So many questions, and they're all about to be answered in explosive fashion. 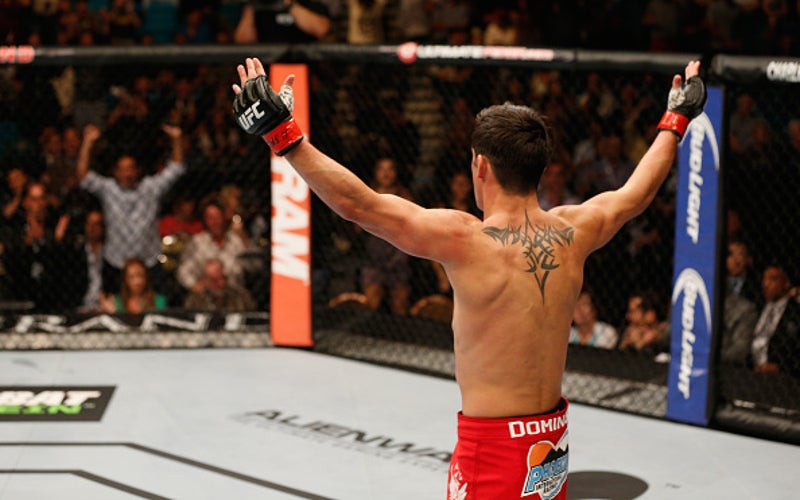 Oh, and to make things even more fun, Cruz has been talking a mean game at Dillashaw, who seems to have seriously let the verbal barbs get under his skin. It's a fun dynamic, given that Cruz sharpened his already formidable speaking game as a prolific UFC commentator while he was injured. It all came to a head when they were on a radio show, seated mere feet away from each other. Cruz went after Dillashaw's resume and a recent spat with his longtime fight camp that caused him to relocate with his primary coach to a new camp in Colorado.

"Who showed you [how to move]?" he asked. "Ludwig? The guy who broke his ankle and quit fighting with a half and half record in MMA? Come on, man. You left the guys you were supposed to be loyal to go with Ludwig in Colorado. You were supposed to be their brothers. You're lost. He just left his so-called brothers. The guys who brought him into the sport." 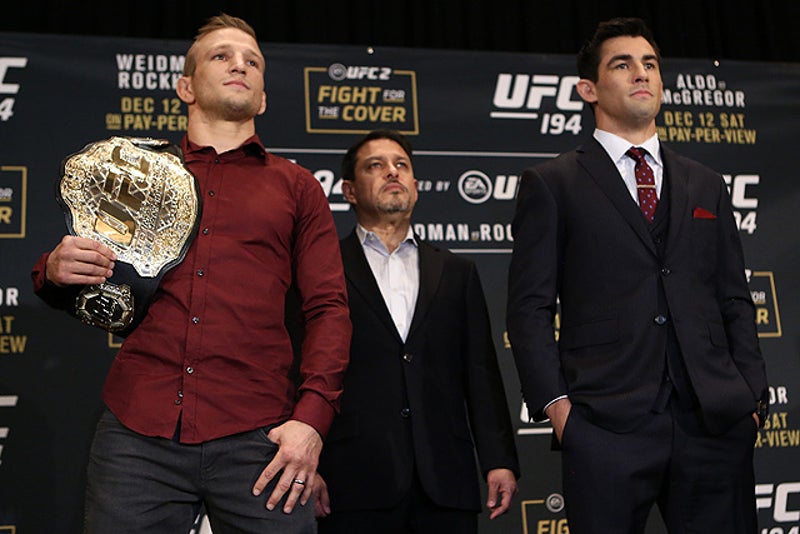 Dillashaw's retorts were significantly more curt. "I used to think Dominick Cruz was really good," he said on the radio show. "Now I know what I'm doing and I know the holes in his game. He used to be good." Later, he said he refused to play into the trash talk game, despite his frustrations. He accused Cruz of acting fake, aping Conor McGregor to sell the fight, not because of a legitimate beef. Meanwhile, Cruz jawed at him even more, saying the real reason Dillashaw wouldn't throw down verbally is that he's just not very intelligent.

"I just know he's not that bright," Cruz said. "He's just not the smartest. He's not the sharpest tool in the shed. He's kind of a meathead jock is what I learned from that exchange. He just wanted nothing to do with talking."

In a fight week interview with MMA Junkie, a significantly more-prickly-than-usual Dillashaw put it like this: "He's got two more days to be relevant and then he's done."

I'm starting to get the impression that these guys don't really like each other. Sunday is gonna be fun.