That Time Ubisoft Made A Spanking Party Game For The Wii

We Dare was more famous for its commercial than its gameplay, largely because the backlash to the trailer was so strong that Ubisoft basically cancelled it.

Mini-game collections existed before Nintendo launched the Wii in 2006, but the explosive popularity of Wii Sports, combined with the new possibilities of motion controls, meant every publisher under the sun was doing mini-games.

We Dare seemed like yet another mindless mini-game collection to be accidentally bought by a gift shopping family member who doesn’t know better, but Ubisoft tweaked its approach to market the game at adults. This resulted in a strange trailer suggesting a game about stripping and spanking.

Ubisoft has tried to bury the 2011 trailer, but the internet never forgets.

Years later, that trailer’s still amazing. I can’t believe this was shot, edited and released without someone looking at it and going “maybe this is a bad idea?”

We Dare was actually in development for both Wii and PlayStation 3, but since the trailer focused on the Wii version, people remember that. And since the Wii was largely seen as a console popular with children, the dissonance increased.

Of course, even Ubisoft couldn’t have predicted how broad the backlash would be, partially driven by the game’s rating being less than M in various countries. It was rated PG in Australia.

The UK’s Daily Mail is known for hyperbole and outrage, thus this piece:

The Nintendo Wii game We Dare has styled itself ‘sexy’ but has only been given a 12+ rating.

Parents have described the 12+ certificate as ‘appalling’ and ‘unbelievable’.

Laura Pearson, 52, from Birmingham, said: ‘I have a 13-year-old daughter and if I knew she was playing such a highly charged sexual game with boys, I would be appalled.

‘It is encouraging under-age sex. The video pretty much shows them swapping partners, girl-on-girl kissing. That kind of thing is not something that young teenagers should be exposed to.

These articles scared the shit out of Ubisoft, though, and they abruptly cancelled the game’s release in several regions, including the United States and the UK.

The whole affair, even the juvenile ads, seemed innocent enough, but it seems Ubisoft is shying away from the attention. The YouTube ads, once available globally, have been region-restricted, now only viewable in European markets. It certainly seems as though the publisher isn’t quite pleased with the attention the game is receiving – even though the ad campain was clearly designed to generate some controversy. Even the title, We Dare, is begging for attention.

We contacted Ubisoft for comment about the situation, and the publisher had none, emphatically stating that the game would absolutely not see release in the United States. Seems like you’ll have to head to Europe for your Wii and PS3 fun.

At that point, Ubisoft was only running away from the US. That didn’t last.

Per a Telegraph piece from only a few weeks later:

Games publisher Ubisoft says that We Dare, the “sexy” computer game in which players are encouraged to act out a “flirty striptease”, will not be released in the UK. We Dare caused controversy with its advertising campaign, which showed images of couples spanking and stripping in front of the game, and when it was awarded a 12+ certificate.

A spokesperson for, Ubisoft, said: “Following the public reaction to the 12+ rating of We Dare, Ubisoft has made the decision not to sell the game in the United Kingdom.”

We Dare didn’t completely disappear, though. It was released in a few regions, including Australia, and people have uploaded videos to YouTube. It’s certainly true that Ubisoft was trying to sex up the idea of a mini-game collection, but it seems way more present in the marketing than in the game itself. There’s stuff like this, though:

Most of the game is boring stuff like this:

(Thanks to Reviewanygame for the clip.) 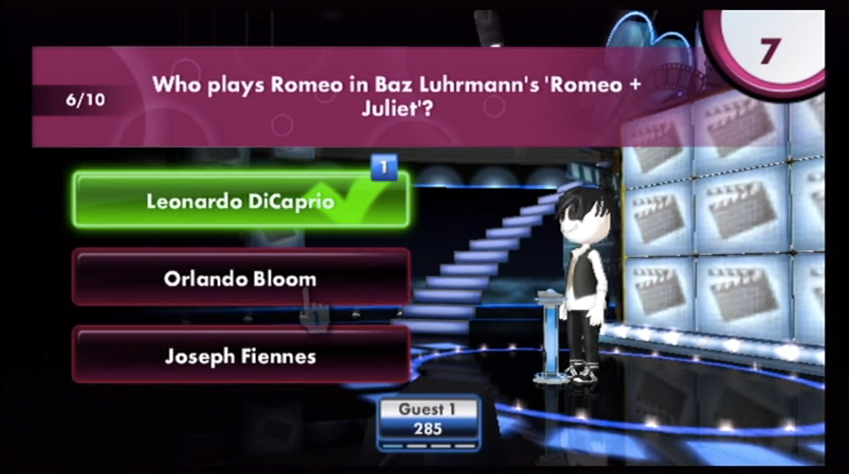 The few reviews that floated out were, predictably, harsh. People were tired of companies farming out endless mini-game collections at this point, each one showing how genuinely inspired Nintendo’s original Wii Sports really was.

Per Ellie Gibson’s review in Eurogamer:

So what of the other games? The funny, sexy ones with the chin rubbing and the spanking and the stripping, as featured in the famous advert? Well, YOU WILL BE AMAZED TO HEAR NO I CAN HARDLY BELIEVE IT EITHER TRULY THIS IS AN HISTORIC DAY, they are rubbish.

The chin rubbing one is called The Big Apple. Two people hold a remote between their faces and try to simultaneously press the A and B buttons three times. I suppose it’s got the potential to be sexy if the players really fancy each other and have been drinking pints of sherry for 17 hours. But generally it’s weird, difficult and deeply unerotic, much like trying to have actual sex after drinking pints of sherry for 17 hours.

In other words, stick with the uncomfortable GIFs.