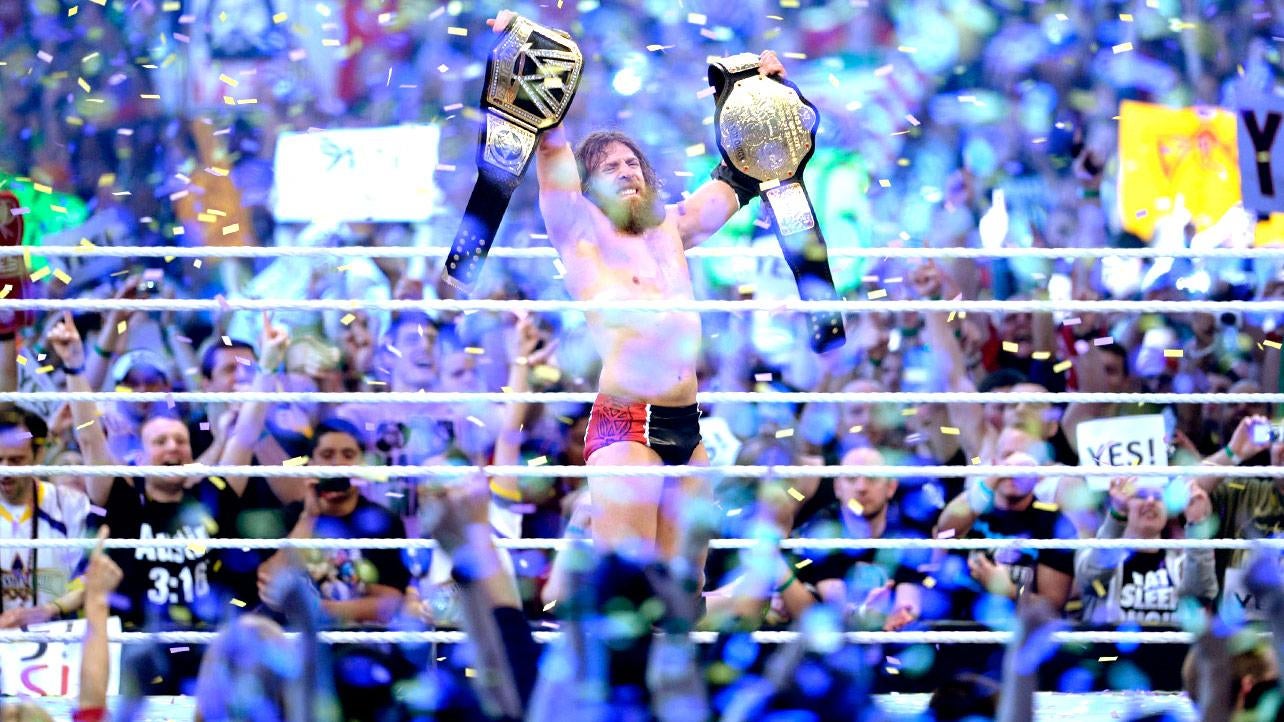 I am sure that Daniel Bryan, who is possibly the greatest pro wrestler in the world, wants to wrestle this Sunday. If he does — if he competes in WWE's 30-man Royal Rumble — then I hope that the thousands of Daniel Bryan fans who've been rooting for him to make a comeback don't discover one day that we basically rooted for the man to get brain damage.

I am, full disclosure, a Daniel Bryan obsessive. I've been torn since April about what to think about his future, and how to interpret his employer's treatment of his health. I've been unsure what to hope for as a fan, and how to separate a spectator's selfish desire to be entertained from the respect we should have for the well-being and free will of those who entertain us.

I've been unsure about a lot, since this isn't just about the pseudo-realities of modern pro wrestling but also the unclear science about the long-term effects of concussions.

Daniel Bryan has had a significant and sensational wrestling career since around the turn of the century. He compensated for being small — well under six foot — by mastering a range of hard-hitting and more technically-complex styles that made him a star in various indie leagues for years. He's a fun wrestler to watch, one who knows how to manipulate the crowd's emotions, and knows how to do the dance well. The match that sold me on his excellence many years ago was a half-hour indie bout where he villainously defied a crowd's bloodlust by repeatedly wrapping his opponent's cranium in the least-violent move ever, a headlock. Before long, the crowd was approvingly chanting "head lock!"

WWE is a weird company that oscillates between entertaining its fans and infuriating them. Often, they accomplish that by favouring different wrestlers than the ones fans cheer for. Bryan has spent most of his WWE career as one of those guys seemingly unfavored by management. For many years he seemed to be working for a company that had trouble respecting him.

Bryan was signed by WWE in 2009 when, from the start, his new employers took the odd approach of simultaneously treating him like a star and a loser. He was, for example, the centrepiece of the promotion's early NXT show but was made to lose every week. Years later, after the first seven of the events chronicled in the aptly headlined article Top 10: Times WWE Dropped the Ball with Daniel Bryan, WWE spent a month promoting him as the Rocky Balboa to then-champ John Cena, had him win the world title and then get pinned a few minutes later in a double-cross before being pushed back down the card. Months later, pro-Bryan crowds kept disrupting parts of WWE programming by chanting for him. He was given a character change which fans rejected, then finally got a run at the world title leading to this feel-good moment: 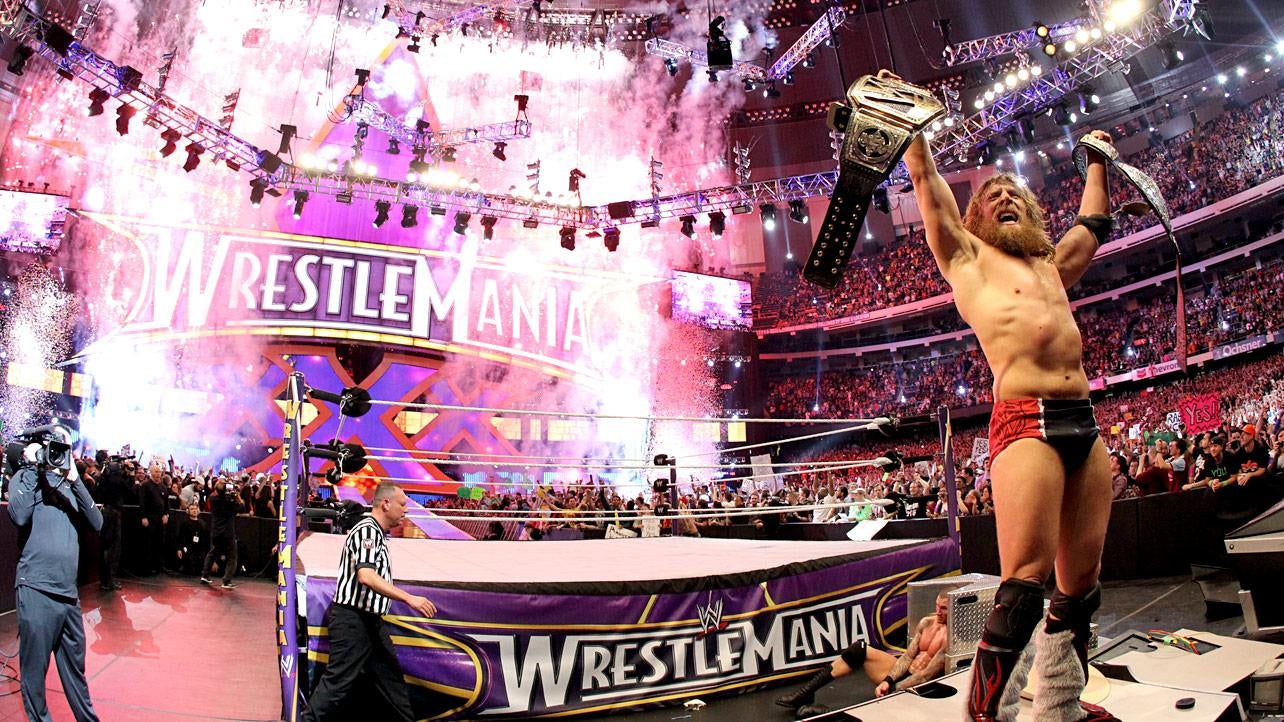 In the spring of 2014, Bryan was no longer mocked by the show's commentators. He was featured all over WWE programming and seemed to finally be getting his due. Fans and management were finally on the same page about the guy, just as his body began breaking down.

A month after he won the world title at Wrestlemania 30, Bryan relinquished it due to a nerve injury involving his neck and arm. Bryan had masked some of his injuries, saying that his arm had been bothering him in the lead-up to that event. More worrying was the fact that he said he couldn't remember one of the signature moments of his career, an early-2014 character turn that led to one of the most exultant moments of crowd celebration of this generation of pro wrestling. Bryan would later remark that he'd gotten a concussion in the match, somehow just before he was holding the crowd in the palm of his hand.

Bryan didn't wrestle much after the spring of 2014 and fans, myself included, feared he was done. He returned in early 2015 and was immediately booked by management to wrestle matches in nearly every WWE show. He was treated more like a star this time around, and he wrestled as hard a style as ever, tempting fate and testing his resilience. He wasn't given a world title run, but he was given the Intercontinental Title at Wrestlemania 31 that spring, and seemed set for WWE's second-biggest TV show, Smackdown, to be built around him. He then got injured (again), went down a month after Wrestlemania (again), had to give up his title (again) and then went on the shelf for an undetermined amount of time (again).

Once Bryan was giving up a title belt a second time it became easier to relate to WWE's scepticism about the wrestler. Maybe he really was too small, or at least was breaking down too much. His career might be over soon and wasn't one to which one could pin a company's fortunes.

That would be convenient. Bryan was never WWE's prototypical wrestler. He's too little for them, and he doesn't look like a Greek god or a super-hero. It's less of a surprise that they didn't book him to even be in the 2014 Royal Rumble, but more of a surprise that the crowd, so in love with him, booed the eventual winner out of the arena. WWE wound up looking stupid when they booked him to look bad in the 2015 Royal Rumble, the second straight year that the guy who won got booed out of the arena. A sensible WWE would let Bryan win the Rumble this year, or so it seemed in early 2015. If you were a Bryan fan you could count on it. You had to figure they'd at least give him a chance at last in the January 2016 Rumble. Surely they wouldn't let his fans derail the event for a third straight year.

In April of 2015, though, he suffered another concussion, the latest of several he's had in his career. WWE didn't acknowledge it at first, but Bryan has talked about it in interviews, saying he was cleared by a doctor who handled NFL players at the Super Bowl but was not cleared by Joseph Maroon, the doctor WWE uses to test for concussions. Maroon is a complicated figure, one seen by some as being slow to acknowledge the impact of concussions on NFL players. WWE is itself in an odd spot: it's cracked down on concussions more aggressively over the years, but still has its own troubling, though improving, medical legacy and is being sued by two ex-wrestlers over concussions. Bryan has been perfectly lucid in interviews. You wouldn't know he's had concussions, but these days, it's hard to tell if that's enough.

Just this week, the wrestling Internet was abuzz that Bryan had been cleared by doctors at UCLA. A new season of the WWE reality show Total Divas just started, and it features Bryan and his wife, the WWE wrestler Brie Bella, discussing their mixed feelings about him ever returning to the ring. Bryan has been Tweeting about wanting to get cleared, has been stressing about WWE signing top wrestlers from Japan that Bryan's fans had been clamoring for him to challenge for years.

Will I return to the ring? No matter what anyone says, I keep training like the answer will be… https://t.co/ew2x5aJxvN

So what have we got? A company and a doctor with a checkered history on concussions trying to make amends and do better by a beloved athlete?? A tough-as-nails wrestler lobbying to come back based on the clearance of doctors that don't work for his boss? An injury that may or may not manifest its ill effects for years? A profession where, if the people in charge want to, they can find a way to let you win a championship and send the fans home happy, even if you've been retired due to a concussion?

I don't know Bryan's medical status. I can't predict what his concussions will or won't do to him over the coming years. I've seen wrestlers like his mentor Shawn Michaels retire for years and then come back for the better half of their career. I think Daniel Bryan will always try to wrestle and that he'll find a way out of WWE if they won't let him. I don't know if that will be a good thing or not. I do know that when I root for Daniel Bryan, I'm rooting for him to be respected, which maybe sounds weird. Pro wrestling is all about the fantasy. It's not sports reality but sports fiction, and so, if Daniel Bryan really has had too many concussions, if he's the equivalent of all those NFL players who need to retire right now, then I just want him to be able to enter the ring, get off a safe hit or two, then take his bow, get his cheers, and achieve a semblance of closure.

Maybe that would be satisfying for me; probably not for him. So come Royal Rumble, guess I'll also be rooting for the countdown to expire, for everyone to turn to look at the entranceway, and for Daniel Bryan to show back up. A clear signal that the doctors have checked, that no one is lying to themselves or anyone else, that the science is good enough, and that the best wrestler in the world is in the clear and ready to compete.

[email protected] or find him on Twitter @stephentotilo. Images via WWE.com