Playing Street Fighter V at launch feels like being at a construction site where the foundation is being poured. The structure we’ll eventually all recognise isn’t there yet. But if the foundation is cracked or uneven, that future architecture won’t work as intended. So far, the bedrock of Street Fighter‘s evolution feels mostly solid, if a little spare.

Capcom wants to do lots of different things with Street Fighter V. The latest chapter of the fighting game franchise introduces new characters and new mechanics, both meant to deepen the strategies with which players approach the game. Capcom’s also attempting to bridge the gap between console and PC players with cross-platform play.

The company once famous for Mega Man is trying to serve two very different mandates with Street Fighter V. They want to grow a mainstream audience who’ll probably only play the game casually while also delivering a game deep enough to keep high-level pro players interested. The latter goal is a crucial part of an aspirational loop that keeps Street Fighter games relevant and successful. This is the series where world-class pro gamers demonstrate spellbinding skills; play it enough and you too might join their number.

The problem with Street Fighter V will be whether people will want to play it enough. After a week with the game, I’m overly familiar with the 10 stages and 16 characters available at launch. I already know which characters fit my predilections best and which I want more practice with. Likewise, I already know that I hate F.A.N.G. and that any online match-up where I have to fight him will stress me out.

F.A.N.G.’s the kind of character who seems tailor-made for players concerned with developing upper-tier skills. He’s got a plethora of ranged attacks that make it tough to get in close. Those moves and many of his up-close strikes can be buffed with a debilitating poison effect that increases damage taken. I’ve already suffered through matches where I’ve been mercilessly slashed and throbbed in purple-tinged pain for the entirety of the fight. By letting you subject yourself to getting thoroughly trashed, competitive games like Street Fighter V offer up a counter-intuitive sort of pleasure. But that alone won’t be enough to be for more casual players.

The wait also applies to the offline Challenge Mode, which is supposed to deliver daily tests of skill to players, but it’s not starting until next month. Six new characters will be coming eventually, and they too will purportedly be unlockable with the credits you win while playing. At present, the only reason you have to keep playing Street Fighter offline is to get better at playing Street Fighter. There’s nothing wrong with that, of course, but the lack of a more robust offline feedback loop is a sign of where Capcom’s priorities are. Online competitive play is clearly the main concern here. Even when in single-player modes, players need to be logged in to earn Fight Money or the experience used to level up their account. A decision like that signals that the ‘real’ Street Fighter V experience is supposed to happen online. You can toggle Fight Request settings so that the game will always be looking for people for you to play in Ranked or Casual matches, with the option to automatically accept challenges. Oddly, there doesn’t seem to be any way to quickly jump into a rematch after playing someone online. The Battle Lounge function lets players invite folks into a virtual room for continuous brawling, and lounges can be secured with a password for privacy. Users can also save, search and share replay videos in the Capcom Fighters Network, another sign of how important the online portion of Street Fighter V is supposed to be.

In the week leading up to launch, I’ve seen Street Fighter V‘s online performance steadily improve. Matches went from laggy stop-motion affairs to being much smoother just before the public servers opened up. Cross-platform bouts went from seeming like they’d never work one day to performing much better than expected the next. But then, hours after the public servers went online — when the number of users probably went from thousands to hundreds of thousands — simply logging into servers became an exercise in frustration. Once I got on, I noticed that Fight Requests weren’t coming as quickly as before, which meant I spent more time playing against the CPU in either Training or Survival Mode. Getting dropped randomly, being unable to log in and waiting a while for some real action are typical launch-day woes in this day and age, but titles that depend heavily on a network ecosystem can wither on the vine with every microsecond of downtime. 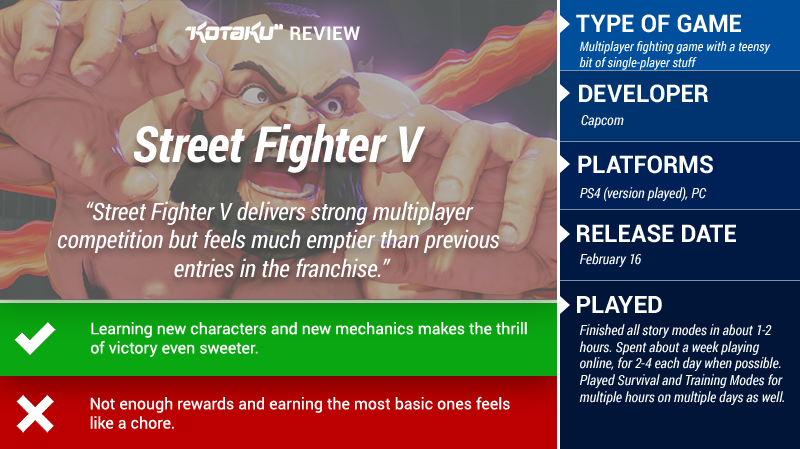 It’s nice that the game can always be passively searching for an opponent, but when the online infrastructure isn’t working, there’s no escaping the fact that you’re left with a rather bare-bones experience. When you have someone sitting next to you, offline local play is fast, fun and filled with individual microstrategies waiting to be discovered. Some of these will doubtlessly center on the new V-Gauge system, which fills up as the player takes damage and fuels special V-Skills that vary from character to character. Ryu’s V-Skill lets him automatically parry a flurry of attacks, for example, while Rashid’s V-Skill triggers a whirlwind that can be both a barrier and attack buff. Learning the different tactics that various characters’ V-Skills open is a nice new wrinkle on an already solid formula.

The formula for Street Fighter V is changing. In previous releases, offline single-player features felt as important as online multiplayer ones, if not moreso. Even if the purpose of the fighting game franchise is to funnel players into competition, other Street Fighter games still felt like they had enough room for people who weren’t primarily interested in building a storied multiplayer career. Street Fighter V is different. You could tell that Capcom’s intention with the new release is to turn the game into a service, a frequently refreshed platform where players keep coming back to cop new characters, show off trophy attire and sharpen their skills against each other ad infinitum. Right now, only the last option is available. The base offering of Street Fighter V is solid for the most part; the parts that are here are well-polished, but the sum total doesn’t feel like a complete package.