Meet Brock “The Problem” Kucao, AKA Spider “The Spider” Spider. He may not look like much with his neon wildman hairdo and 29 instances of the same tattoo, but he’s gonna win the crap out of the UFC featherweight title.

I’ve played about seven hours of EA Sports UFC 2 now, and I’m digging it… with a few reservations. For the most part, combat strikes the right balance between complex and understandable — and damn does striking ever feel good — but the game itself is a bit barebones. There’s no better way to express the full spectrum of my emotions than through the lens of my gangly fight boy, The Problem.

The Problem is a lanky striker with dynamite fists. I created him in order to test the limits of EA Sports UFC 2‘s career mode character creator, to push outside the bounds of reason and return with an unyielding killer who reeks of KFC.

I found this goofy-arse cartoon chicken tattoo, and I was immediately transfixed by it. It was perfect. I started by stretching it across my character’s left arm. It looked funny, so I thought, hell, why not do the right arm too? That’s when I discovered the most versatile brush in my belt, the bellowing harbinger of my art: I could stretch tattoos more or less as much as I wanted. I proceeded to give my character the same chicken tattoo 29 times, some small, others large and one encompassing his entire torso and face.

Somehow, though, he turned out energetic, fun-loving and weirdly likeable.

the next ufc featherweight champion https://t.co/ZDNFGHvRKl

Look at how stoked he is about punching another dude in the face! That’s my adorable nightmare frankenchild. I’m so proud.

It’s pretty no-frills, and it doesn’t really teach much (aside from basic dynamics of stamina and power) that you can apply to fights. Some training minigames are more useful than others, but that’s kinda the gist: they don’t really teach much. Learning the more complex aspects of submission offence and defence is especially unintuitive, a pretty big black eye on a game that’s ostensibly 50 per cent about grappling.

On the upside, clinching and grappling are significantly less confusing than they were in the first EA Sports UFC game, with simple directional inputs and a handy HUD guide replacing the previous game’s weird analogue stick twirling. Advancing position makes sense because the game straight up tells you what constitutes a better position and gives you a simple roadmap to getting there. It’s tremendously satisfying to knock somebody down, dive into their guard, pass into half-guard and side control, and then rain down punches from full mount. There’s victory, and then there’s complete and total domination. Beating someone standing and on the ground is the latter.

But UFC 2‘s submission portion is a confusing and arbitrary. If a fighter attempts a submission, the defender pushes in various directions on a coloured four-quadrant menu prompt while the attacker moves their cursor to block the defender from holding in any single direction for too long. Submissions have multiple stages, and it’s pretty easy for the defender to slip out at some point. The short version? It’s fiddly, awkward and not much like actual grappling. The submission portion of the game isn’t horrible, but it’s nowhere near as fun, tense or dramatic as striking.

As a result, I ended up focusing most of The Problem’s training on striking and takedown defence. He’s a born out-fighter, given that his wingspan is akin to that of a Boeing 747, and shucking off takedowns in UFC 2 is pretty easy once you get into the rhythm of it. Focusing ended up being a powerful asset. As The Problem worked his way through the ranks, from The Ultimate Fighter to major UFC events to title shots, his strikes became devastatingly fast and powerful. 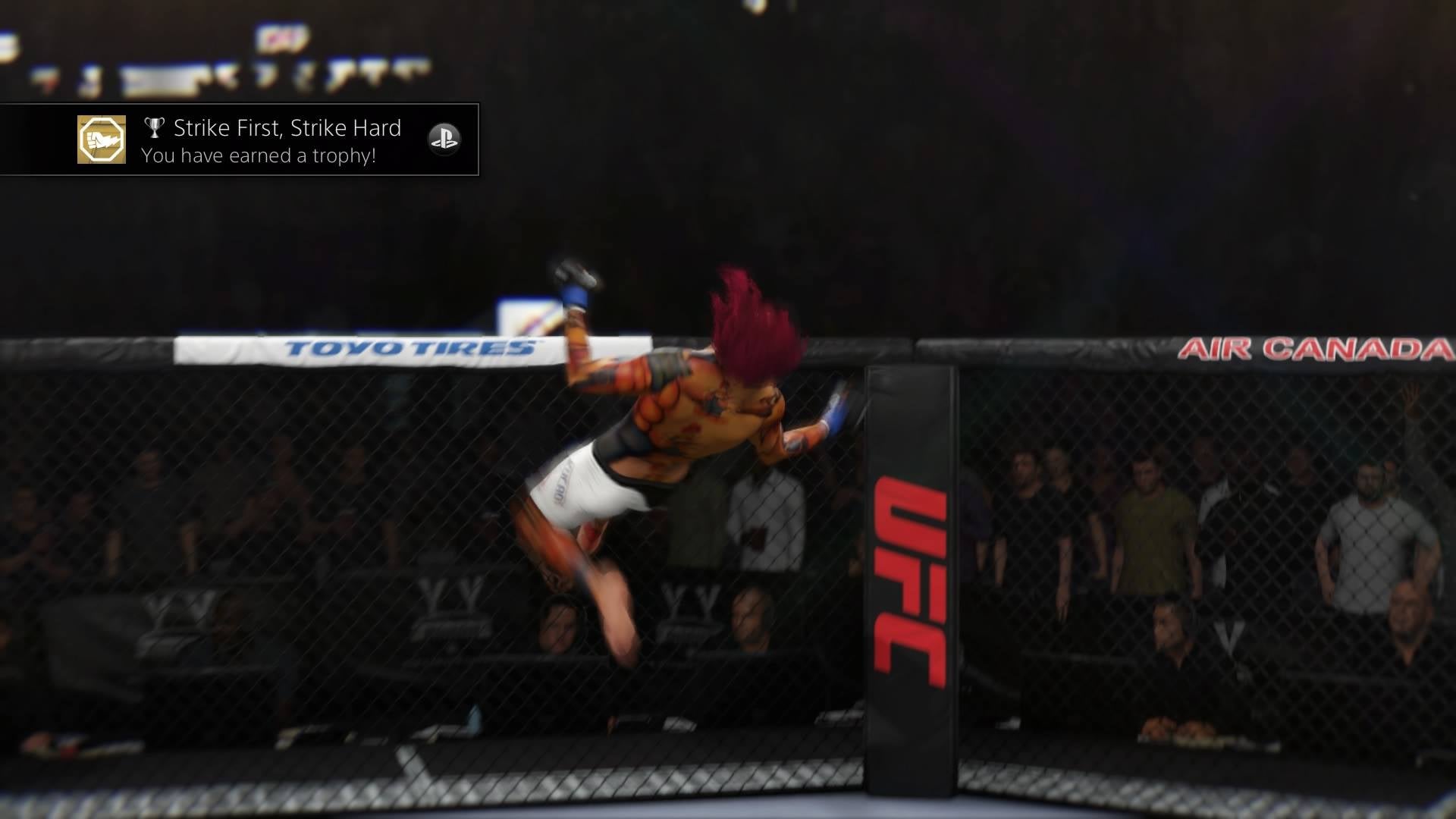 The Problem does a flip, but it looks like he slipped on a banana peel.

Striking in UFC 2 is brutal, satisfying and sort of occasionally sometimes close to authentic. You’ve got to manage stamina while trading leather (and/or foot skin) or else your strikers will become sloppy and slow. Aiming for the body takes away opponents’ stamina, leaving them more vulnerable than they’d be otherwise. And of course, as in an actual UFC fight, anything can happen. If you eat a solid shot to the head, you might end up “rocked”, swimming through a pea soup pool of delirium on the verge of knockout.

Momentum shifts are thrilling. Early on in his career, The Problem came up against something of a dilemma in a striker far more accomplished than himself. I was on the defensive from the get-go as this bald bruiser battered The Problem’s legs and body. I was overwhelmed. All I could do was retreat and feebly attempt to counter with The Problem’s ridiculous aeroplane arms. As the first round drew to a close, he had me backed against the cage. I was rocked and woozy. My defeat was all but certain. But my opponent pushed too hard for the finish. He tired himself out wailing on The Problem’s titanium cranium, and I flailed with a desperate uppercut. It was right on target. With seconds left in the round, my opponent crumbled. A few brutally satisfying ground strikes later, and The Problem was getting his hand raised.

Moments like that are what make UFC fights great, and they’re abundantly present in EA Sports UFC 2.

I also have to point out just how authentic the game’s presentation is. Here’s a fight from early in The Problem’s prestigious (and now, due to long-term wear and tear, sadly almost over) career:

Everything from the walk-ins, to the introductions, to the option to touch gloves at the start of the fight is spot on. It’s like being part of a UFC broadcast.

Sadly, the game’s career mode stops short of the truly interesting elements of The Real UFC Experience. Where other sports games offer RPG-inspired career modes rife with intrigue and drama, UFC 2 flubs it. You train and you fight. That’s it. It’s a huge missed opportunity in light of the burgeoning number of colourful personalities in the UFC these days, not to mention the role trash-talking, self-promotion, and out-of-cage antics play in modern day UFC success. Perhaps someday a game will fulfil my fantasy of a trash talk battle with Conor McGregor, but UFC 2 isn’t it.

EA’s flagship Ultimate Team mode expands UFC 2’s career mode somewhat by giving you five custom characters to manage, online functionality, and of course, microtransactions that unlock new moves, but it’s a riff on the same basic formula. I’m not bored of it yet, but I feel like I will be before long. There are a few other modes — knockout mode, inspired by more traditional fighting games, is a highlight — but nothing to keep me coming back for long.

The main attraction of EA Sports UFC 2 is the fights, and in the cage the game succeeds mightily. Combat’s still got some rough edges, and submissions need serious work, but on the whole it’s satisfying and loaded with tension. The game just feels like it needs more hooks, and not just the kind that hit people in the face.