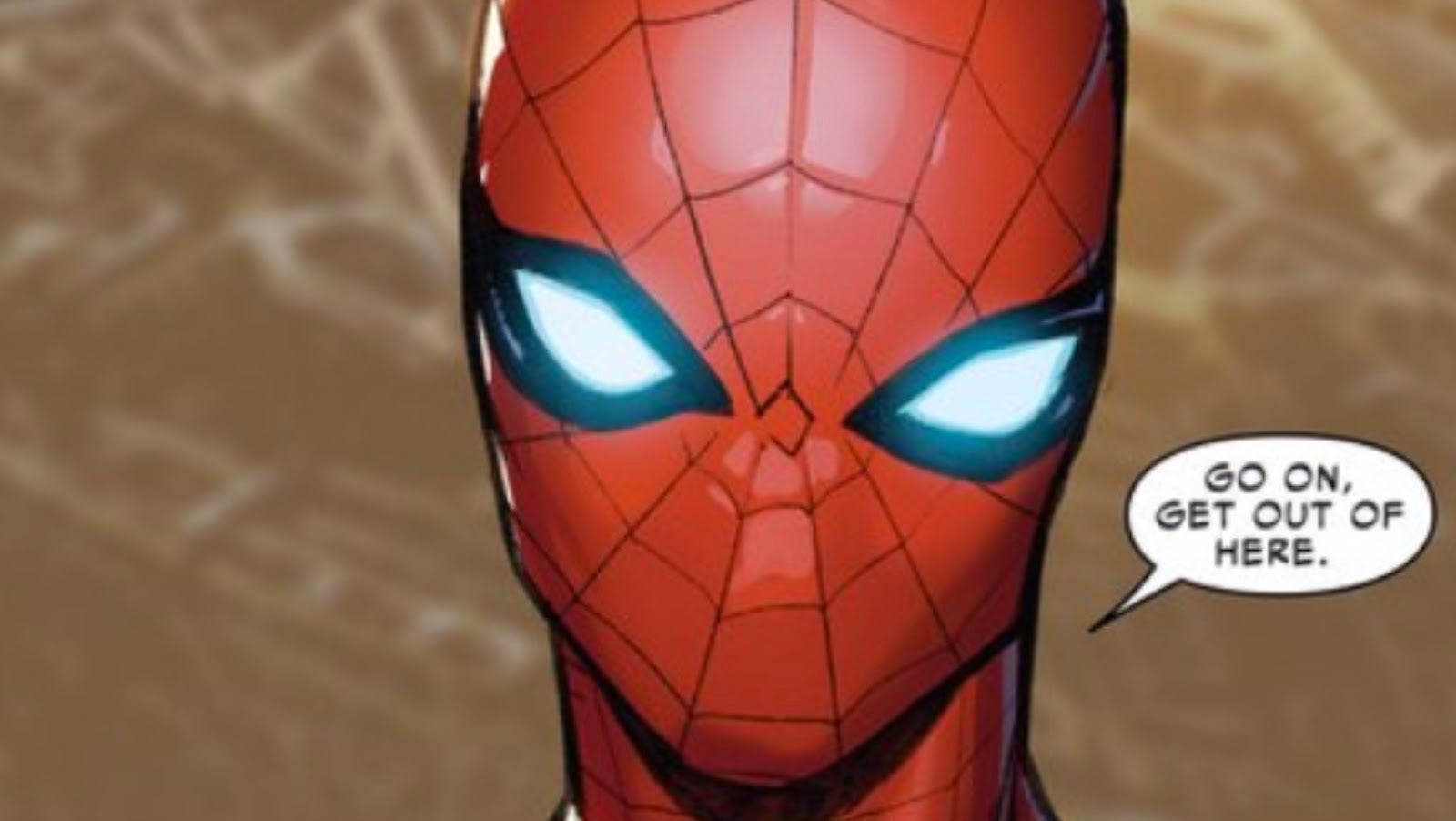 The original wall-crawler is a little salty about Miles' costume, though. Because even he has to admit that it's cooler. 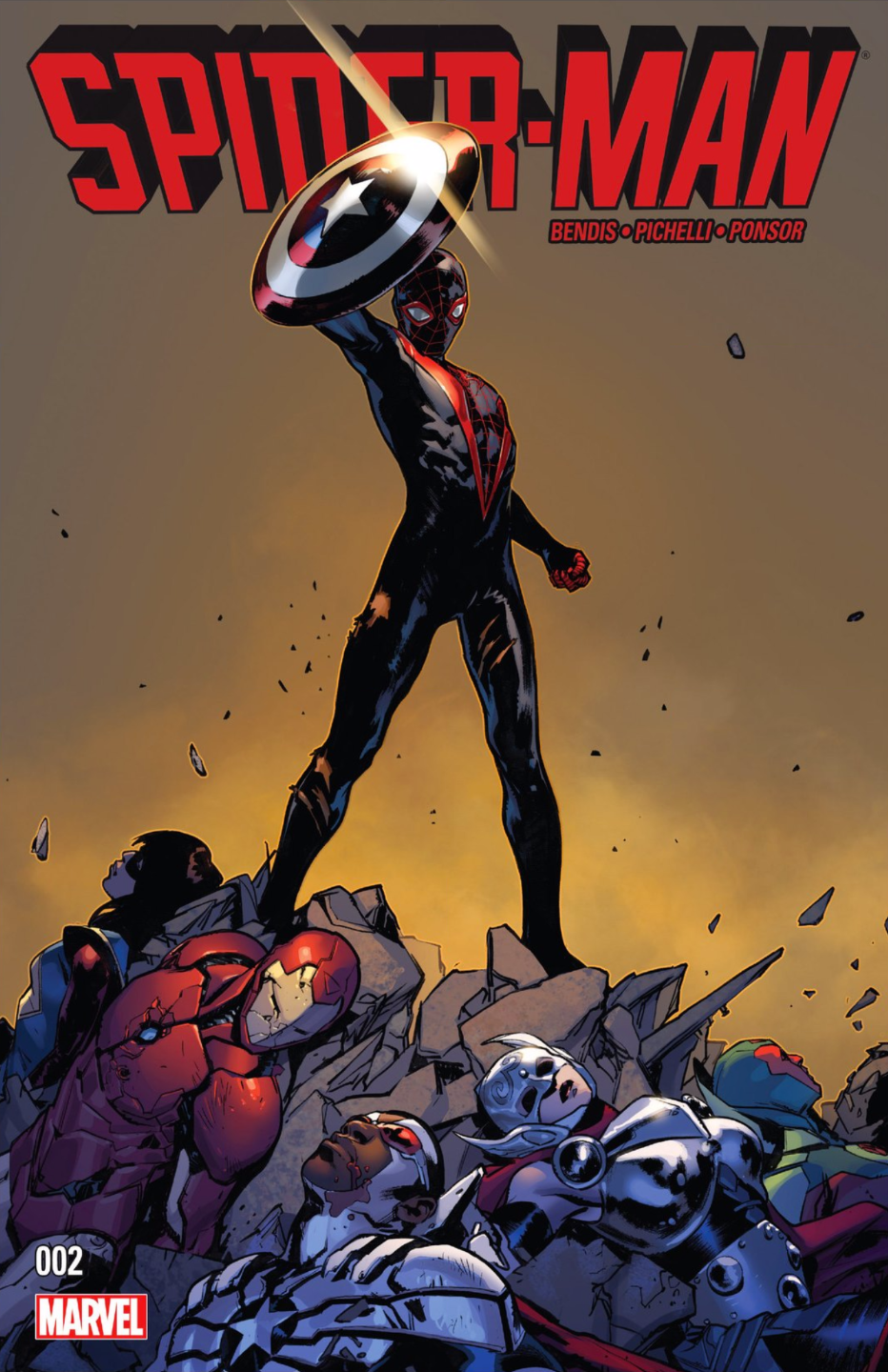 For those who may not know who Miles Morales is, he's a teenage Spider-Man from a now-dead alternate universe. He started webbing up bad guys after the death (and eventual resurrection) of that universe's Peter Parker and became part of Marvel's main Earth-616 reality in the aftermath of the publisher's big Secret Wars event.

One of the big questions surrounding Miles' integration into the mainline Marvel Universe was how the publisher was going to handle the relationship between Peter and Miles. Spider-Man #2 gives readers a look at the two Spider-Men's first meeting. Written by Brian Michael Bendis, with art from Sara Pichelli, Gaetano Carlucci, Justin Ponsor and Cory Petit, it shows Peter both endorsing and kvetching about the new web-slinger.

Their initial encounter gets presented in a flashback as a random run-in. There's no mention of Miles' Ultimate Universe history. As far as Peter seems to know, this is just another kid with spider-powers and web-shooters who jumped in to help. 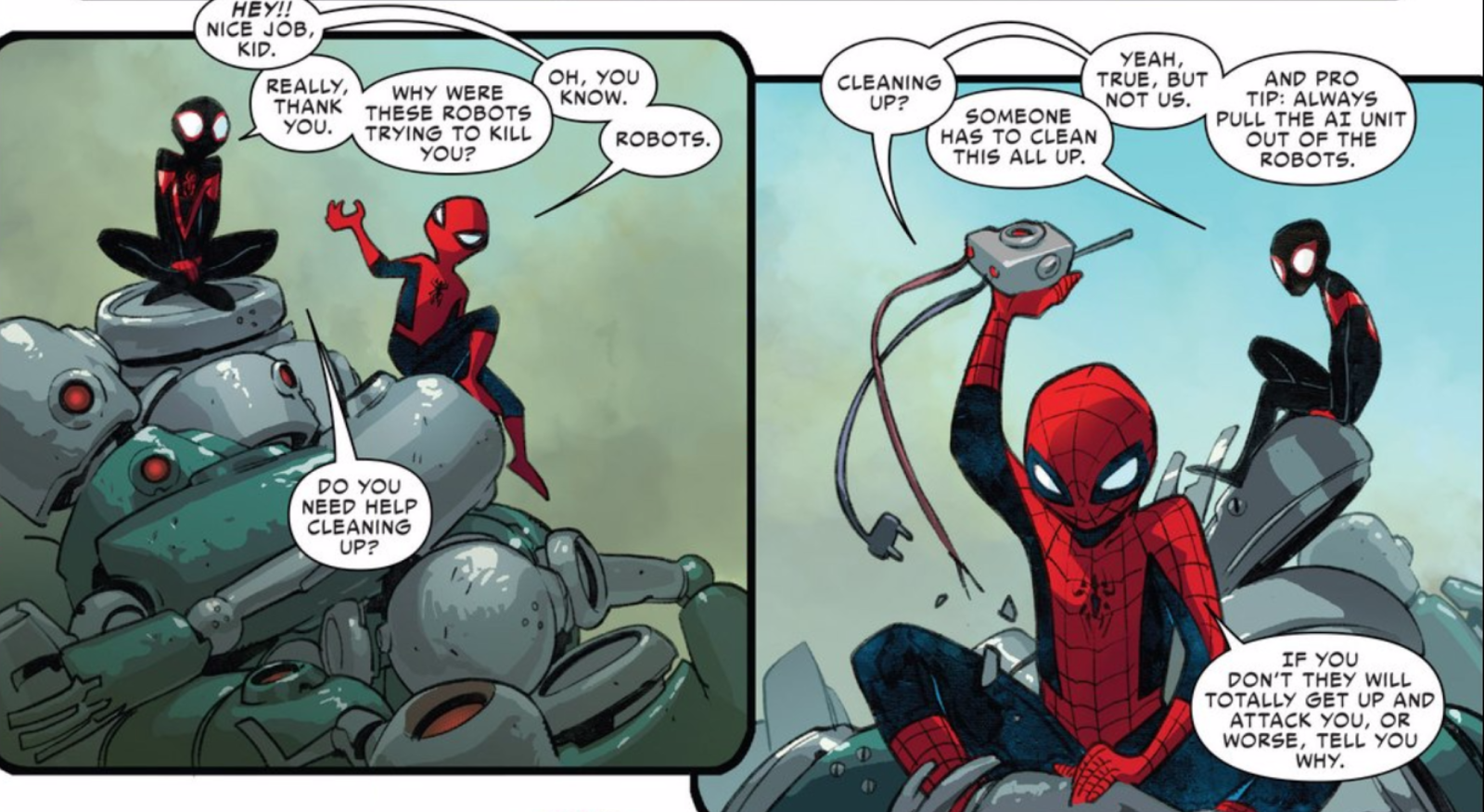 What I enjoyed most about this issue is that you can get a sense of how Miles is going to be different than Peter. He quips a bit, as his predecessor does, but comes across as less angsty and more earnest than Peter did in his earliest adventures. Bendis writes Miles as a kid who gets to follow in the footsteps of his idol, which builds sympathy for the new Spider-Man. But that sympathy isn't universal. When a nervous cop points a gun at Miles after he saves the day from rampaging demon prince Blackheart, saying he doesn't know who he is, Peter Parker's response says it all. (Click the below image to enlarge.) 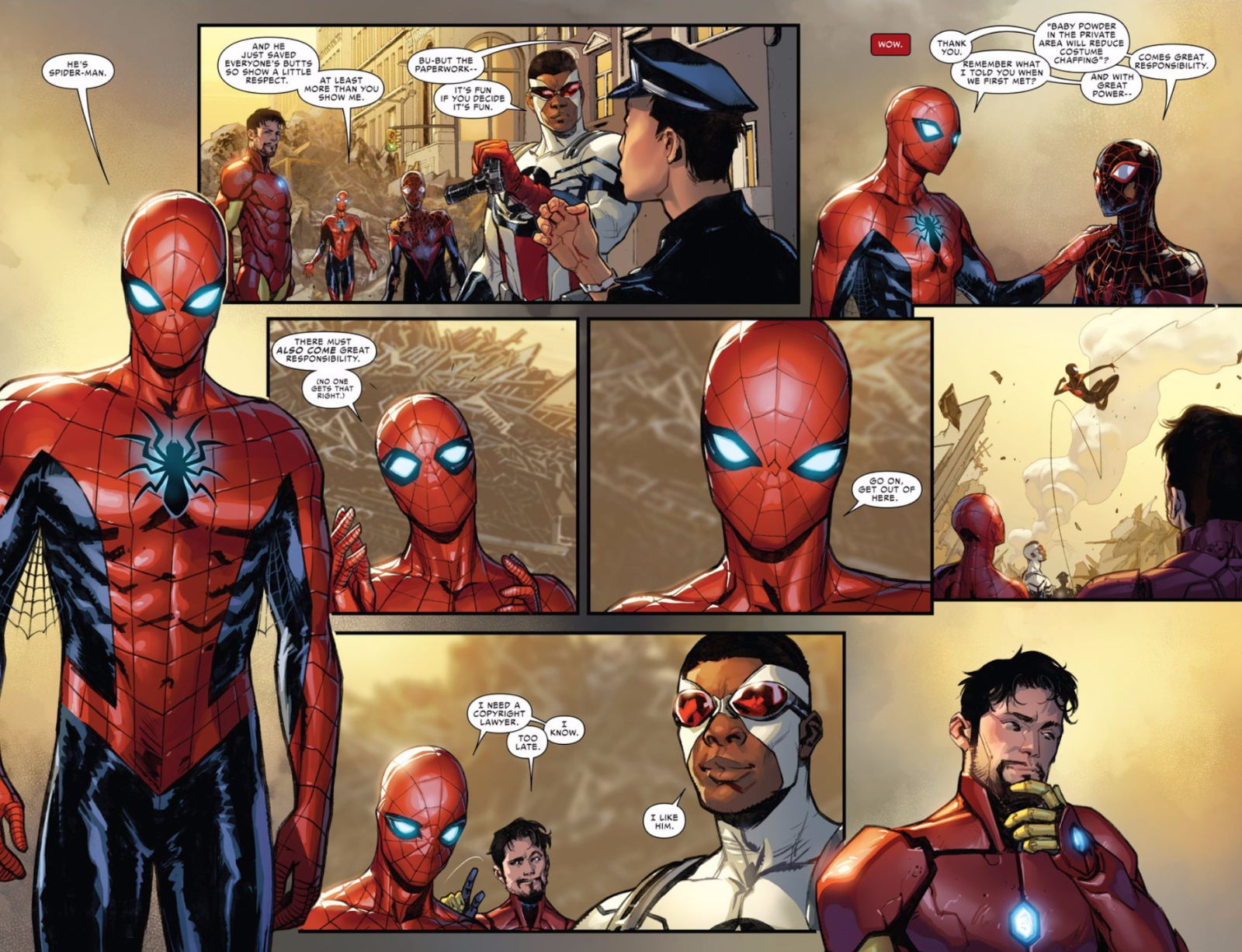 The difference in melanin levels between the younger and older Spider-Men doesn't go unnoticed in the fictional Marvel Universe. In a sequence showing clips of a reaction video, a young fan waxes enthusiastic about the world's increasing superhero diversity. However, Miles isn't exactly OK with all of what she says. 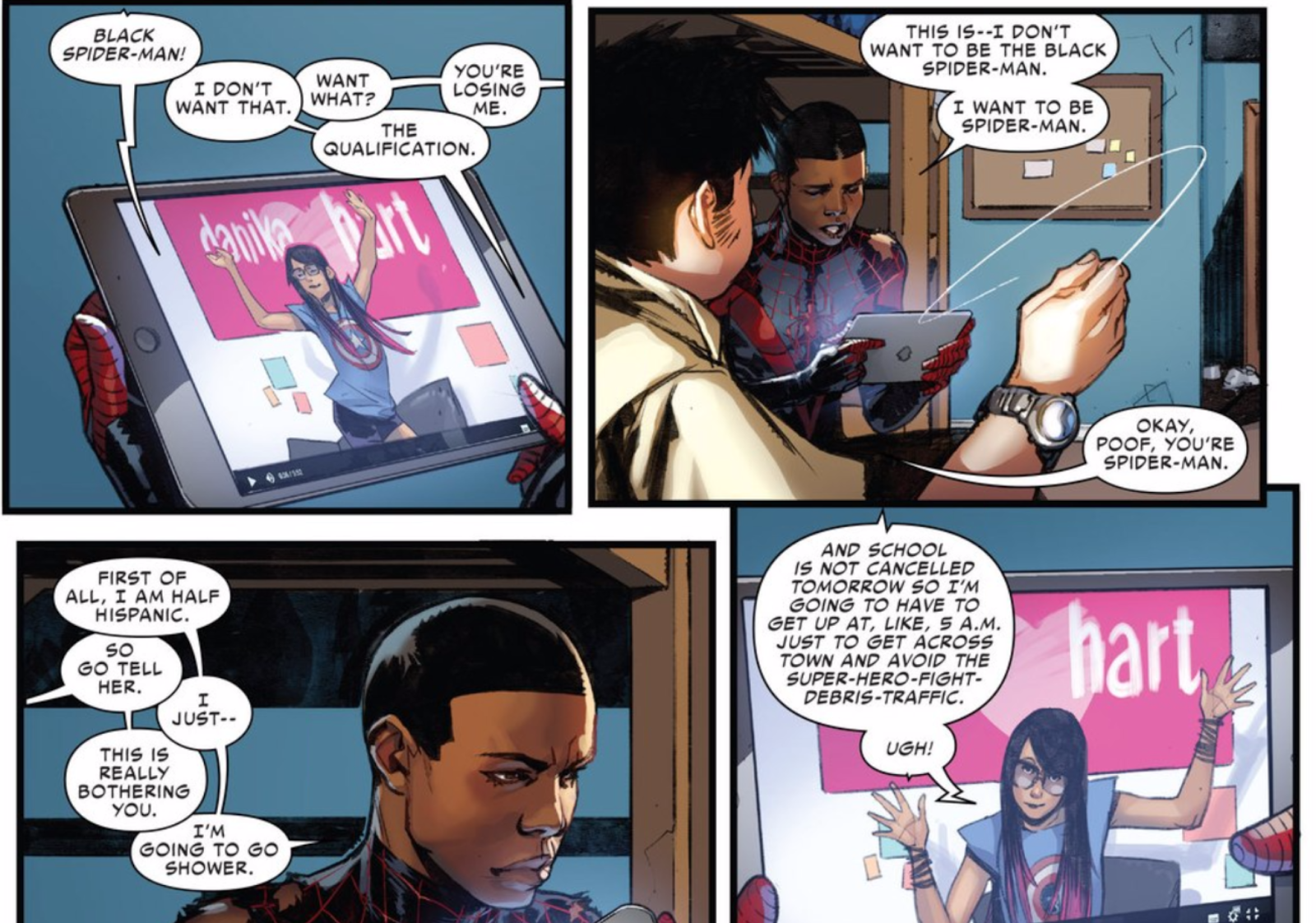 Other parts of Spider-Man #2 show more cantankerous media reactions to Miles' world-saving debut and push forward the idea that Miles will be filling the Spider-Man void left in Manhattan, since Peter is now the jet-setting CEO of a high-tech company. Spider-Man #2 deftly does the necessary work of making it feel like Miles Morales belongs in the Marvel Universe. The driving tension is all set up: he'll have to reckon with Peter Parker's legacy and deal with the public's perception of him, with context that Peter never had to confront. So far, this series is off to a very good start.