The Flame In The Flood: The Kotaku Review

the flame in the flood 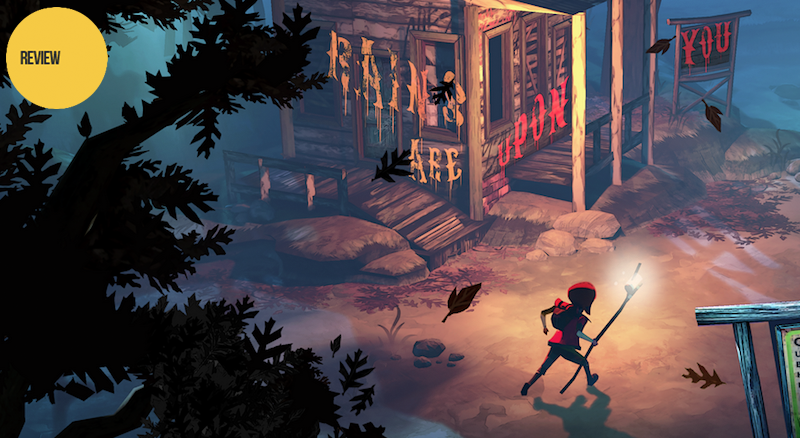 I used to live on a boat. It was a converted World War 2 rescue vessel that sat in an industrial canal, docked at the end of a lot owned by an Irish mobster and his son. I lived a strange little existence there, in a world with its own characters, customs and myths. Even the people who lived with me don’t always believe the stories I tell.

The new survival game The Flame in the Flood is, in many ways, what would happen if that time in my life was made into a video game. Indie studio The Molasses Flood funded the game through a Kickstarter campaign in 2014, which I backed based mostly on my nostalgia for the premise. You play as a young woman named Scout who is trapped in a flooded post-apocalyptic America. You spend the game on a raft guiding Scout and her dog, Aesop, down a rushing river, trying to survive long enough to figure out why everyone went to the Rapture.

The Flame in the Flood is a familiar survival game, with death sending you back to the start and the loot you scavenge randomised on each playthrough. You craft items with these found supplies, scrounged up from the different types of islands that appear ahead of you on the river. Clinics give you rags and alcohol for bandages and torches; hardware stores give you parts to upgrade your raft and build tools and traps.

You’ll have to deal with Scout’s hunger, thirst and body temperature. There are also snake bites, food poisonings and dangerous wild animals who usually attack you but sometimes, if you’re lucky, can be turned against each other. 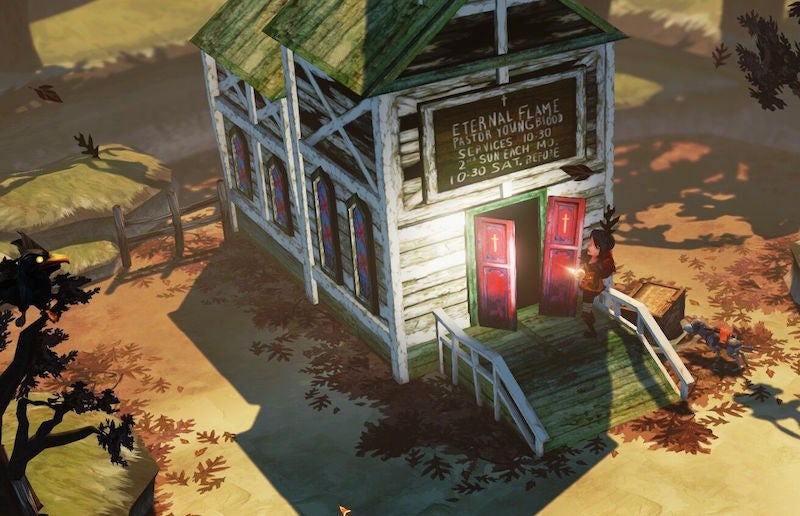 All of that is held together by the river, and The Flame in the Flood‘s river is the star of the show. It’s ever-moving, with calm waters that morph into rapids that will dash your raft on the rocks and drown you if you aren’t careful. Raft upgrades make it easier to navigate and survive, but the river never feels truly knowable or safe. Every moment is spent hurtling along, attempting to snatch loot or avoid bobbing debris.

Such navigation calls for constant split-second decisions: should you swing wide and attempt to reach the marina for raft repairs, or let yourself drift into that wilderness area in hopes of finding a few scraps of food? If you row hard to avoid that shipping container, will you have enough stamina to avoid those jagged rocks ahead?

The river winds through an evocative depiction of the deep south post-apocalypse. In a few confident strokes — helped along by some confident art design and Chuck Ragan’s twangy musical score — The Flame in the Flood paints a vivid picture of the world that was and the new, ruined world that is.

There are strange beasts to overcome and even stranger people to meet, and I was always thrilled when I made a new acquaintance amid the busted petrol stations and collapsed churches. Survivors speak in a strange patois and will help you when they can, though their actual dialogue is somewhat sparse and repetitive. More often than not they just made me more eager to jump back on the river and learn a little more about what happened. 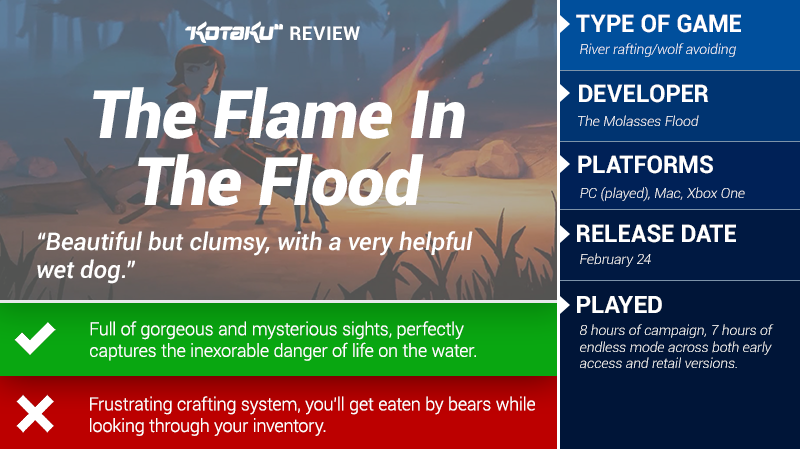 Unfortunately, the survival mechanics don’t flow as smoothly as the river and the backdrop. Survival relies too much on randomness, and more often than not the ability to craft a necessary supply comes down to the random number generator sending you to the right place for the right part. While some items can serve more than one function, many late-game upgrades count on having found key components upstream. Rather than allowing for multiple approaches to survival, The Flame in the Flood hinges on specific items for specific tasks with little leeway for creativity and players’ personal style.

As a result of that, more often than not you don’t get better so much as you get lucky, which can lead to parts of the game feeling dissatisfying and unfair. The game’s ceaseless forward momentum makes it hard to take stock and plan your next moves; the only place you’re truly safe is at a fire or on a dock, and even then Scout’s various personal health meters are constantly ticking down.

The inventory system doesn’t make crafting any easier. Items can be stored on your person, on Aesop or on your raft; leave a necessary item on the raft and there’s no indication you can craft with it unless you remember what you left behind. You’ll find yourself shifting items from place to place to craft with them, which occasionally requires multiple steps in the clunky interface. There’s a hotbar that attempts to mitigate some of that, but it lacks the responsiveness and fluidity that would make it as truly useful as it could be. 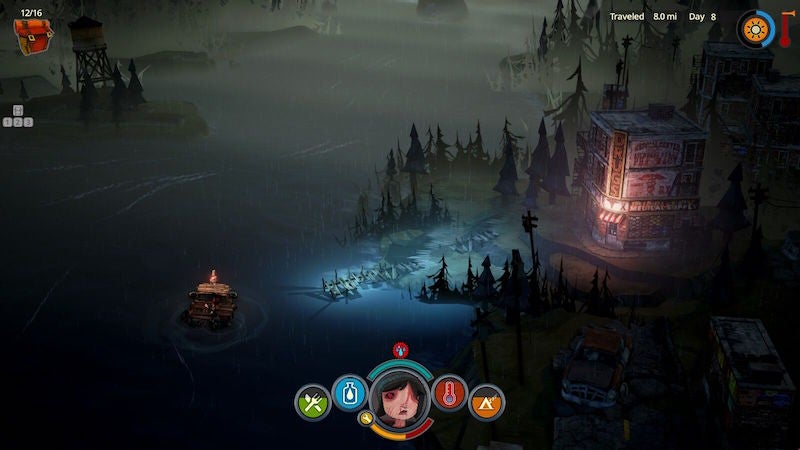 The game doesn’t pause when you craft or enter your inventory. I was unable to deploy a gas bomb to ward off wolves, for example, because they attacked me while I was looking for it among my possessions. Another time a wild boar gouged me to death while I was stuck at a workbench trying to craft a weapon to use against it. In one key narrative moment in the campaign I died repeatedly while attempting to read a required piece of information because a certain rude wild animal wouldn’t wait for me to finish. While this sense of “real time” adds to the game’s pace and tension, it takes more than it gives.

The Flame in the Flood features both a narrative campaign and a narrative-free endless mode. Endless mode provides a little more room to play with crafting, though the clumsy crafting system remains no less of an issue. Some player-friendly additions like the option to turn on checkpoints (in case you die) or use Aesop to transfer gear in between games (in case you decide to start over) mitigate some of the frustration from dissatisfying deaths, of which I experienced a few too many.

Life on a boat has a certain inexorability that no one warns you about when you’re deciding to live on one. The ferry I used to live on was very old, and I’ll always remember the time we sprung our first major leak. I spent a Saturday night soaked and shivering, desperately trying to plug up the boat’s antique wooden guts as buckets and ropes bobbed around me. I was awed by the force of the water rushing through my fingers, and I realised that if I couldn’t overcome the canal’s onslaught, we would inevitably sink.

As I navigated The Flame in the Flood‘s dangerous river, I felt that same merciless pull. Despite its flaws, this game perfectly captures what it feels like to live on, with, and against the water. My journey downstream has been studded with unexpected victories and dramatic failures, tall tales to rival any told by the characters I’ve met. It retold a part of my life in a strange but familiar way, offering a glimpse into another world that felt both foreign and like home.