Dead Or Alive Xtreme 3 Isn't Worth All The Drama 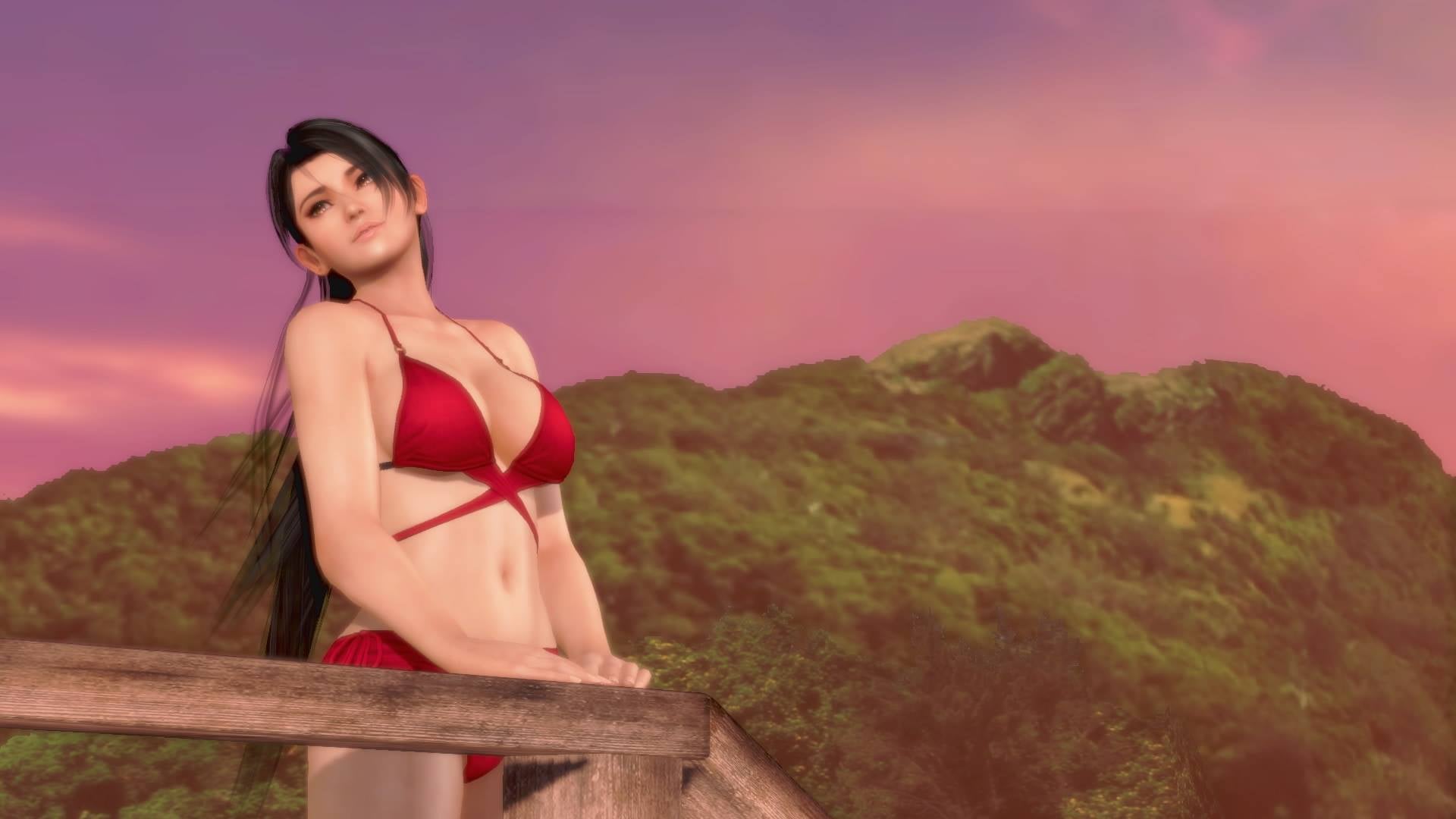 Gamers have spent the past several months arguing over whether Dead or Alive's third bikini-clad vacation simulator deserves a Western release. That's a lot of time and energy wasted on the worst game in the series.

The Dead or Alive fighting game series is known for two things. One is its counter-based battle system. The other is bouncing breasts.

The first Dead or Alive was released in 1996. 3D fighting games were still finding their footing, with developers pushing arcade and console hardware to the limit to create characters that looked more human and less like vaguely human piles of coloured blocks. Team Ninja, an in-house development studio for Tecmo (now Koei Tecmo) pushed past those limits in order to add what many consider the crudest of physics, bouncing breasts. 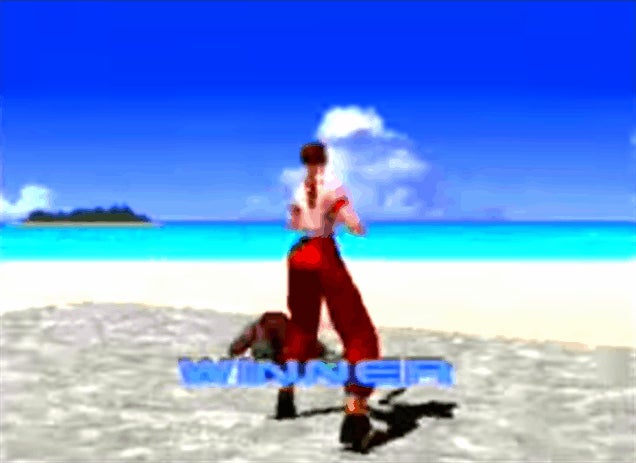 As it turns out, that sort of thing can be a selling point. Tecmo and Team Ninja embraced the titillating aspects of the fighter. Where other fighting games would sell new installments based on new characters or enhanced game mechanics, the Dead or Alive folks were putting out commercials like the one below, which I swear I embed whenever I write about this game.

The sex appeal of its female characters became so overwhelming that in January of 2003 Team Ninja sent them all off to an Xbox exclusive island to frolic about in bikinis. 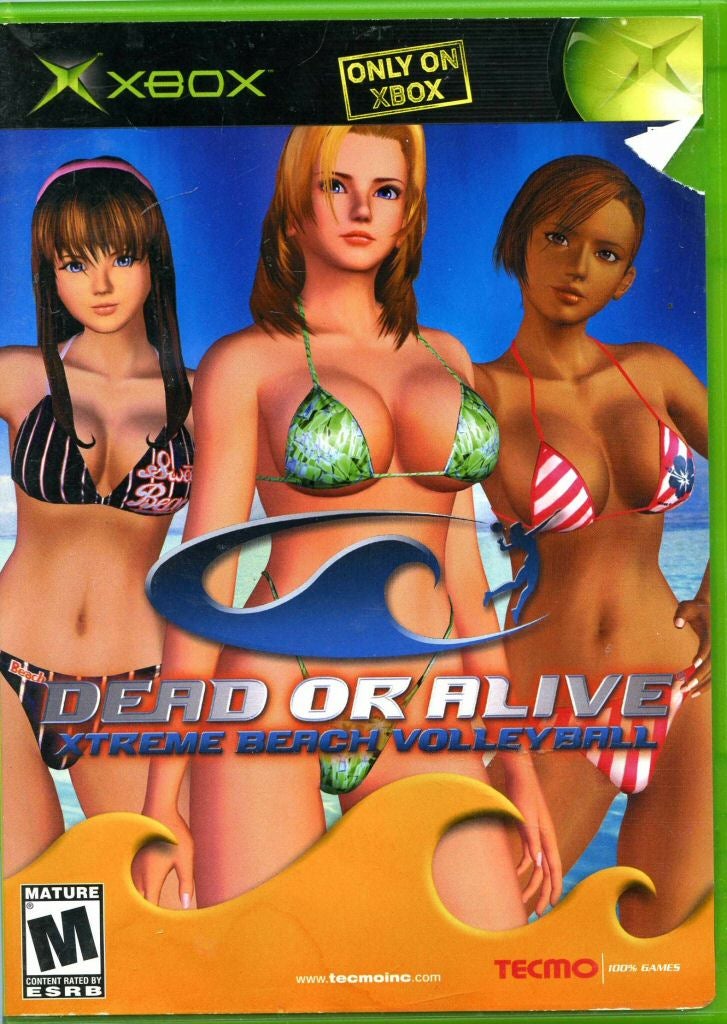 Note the lack of a volleyball on the cover of this game. Dead or Alive Xtreme Beach Volleyball is a stupid game. I love it so much.

The premise is silly. Zack, the eccentric creep of the fighting games, transports seven of the female characters from Dead or Alive 3 (plus newcomer Lisa) to his private island resort for a two week vacation. Over the course of 14 days the women gamble, play mini-games and trade presents. They form friendships. They collect bikinis. They play surprisingly enjoyable games of volleyball.

At the time of its release, Dead or Alive Xtreme Beach Volleyball was a ridiculous spectacle, and I was completely charmed. That Tecmo would release such an overt attempt at cashing in on the popularity of its 3D models delighted me. The two-on-two volleyball matches were simplistic but satisfying. Collecting all of the bikinis became a goal in life just so thirteen years later I could say I did it (I did not.) I even enjoyed the licensed music. Every once in a while I still catch myself humming Reel Big Fish's "I Want Your Girlfriend to be My Girlfriend Too." That's DOAX's fault.

In 2006, following the release of Dead or Alive 4, Team Ninja gave Zack another damn island for Dead or Alive Xtreme 2. The volleyball is still there, tweaked slightly to make it a bit more difficult. Tecmo just dropped it from the Xbox 360 exclusive game's title, along with all pretense that people were buying it just to play volleyball.

There are more bikinis to collect to help "clothe" the roster, increased by one with the addition of Kokoro. The core gameplay mechanic of sending gifts and building friendships remains intact. Some silly little minigames stayed, others were retired. The biggest change between the first and second games is the latter's inclusion of two exciting new challenges. The waterslide . . .

The new feature of Xtreme 2 is the breast physics. Rather than have the left and right breast move as if they were part of the same chest, Team Ninja's latest physics foible saw the pair bouncing about madly as if desperately trying to escape one another. It was hilarious. I'd post a GIF, but I can't write while doubled over with laughter.

The two exciting new minigames and ridiculous bouncing action weren't enough. Despite the inclusion of a completely different Reel Big Fish song, Dead or Alive Xtreme 2 is widely considered to be a more-of-the-same sequel. With the exception of a PSP port of Xtreme 2, the series faded away for the better part of a decade.

Which brings us to 2015. Over the past decade attitudes towards the depiction of women in video games have become the subject of intense scrutiny and fierce debate. New games are quickly evaluated based on how women are treated and portrayed. Features that years ago wouldn't have warranted a second glance generate scandal, and developers are quick to respond.

Basically shit's all fucked up, and in the middle of all of this Tecmo, now Koei Tecmo, decided it was a good time for a new bikini volleyball game.

By the time Dead or Alive Xtreme 3: Fortune for the PlayStation 4 and Venus for the PlayStation Vita were announced in August of last year, Koei Tecmo had already decided to restrict the release to Asian countries. Producer Yosuke Hayashi explained the reasoning behind the decision in an interview with Japan's Weekly Famitsu.

"As a fighting game, there are a great deal of fans overseas, but for the Xtreme series, domestic fans make up an overwhelming majority. So, after much deliberation, we've decided to release the game only in Japan and other Asian territories."

Well that made sense. Initial reactions were tinged with doubt over the reasoning, but the ease of important coupled with the fact that Hayashi went on to suggest that a Western (albeit a modified version) could be in the cards if fans made enough noise kept discontent at a comfortable level.

At least until November, when someone on the Dead or Alive Game Facebook page wrote this in response to a fan's question about a potential Western release.

Ace reporter Patrick Klepek wrote an excellent article on the fallout from that comment. In short, fans and one retailer started blaming "social justice warriors" for the lack of a Western release for Dead or Alive Xtreme 3. Koei Tecmo's response to the Facebook comment days later didn't the situation.

I must admit, as a fan of the series looking forward to seeing how Team Ninja has evolved Dead or Alive Xtreme since the last instalment back in 2006, I was a little disappointed. Nowhere near as disappointed as I am now that I've played the game.

If you're looking to purchase an import version of a game like Dead or Alive Xtreme 3, which has English subtitles and menus for its Asian version, I recommend creating a Hong Kong PSN account and purchasing Hong Kong PSN card codes from a reputable source. That way you can download it on day one instead of waiting for an online imported swamped with orders for not only this game but Hatsune Miku Project Diva X and Dark Souls III to get its shit together. Without going into details or naming the store, I went through hell to get this game.

It was not worth it. My first indication of this was sand.

Here is a video of the flag racing mini-game from Dead or Alive Xtreme 2, released in 2006.

See how the sand on the beach deforms under their bodies and feet? It's a bit sloppy, but I love the effect.

Now here's a video I took of the flag race in Dead or Alive Xtreme 3.

Nothing. It's just a static texture. Sometimes the characters' feet fall into it, but no deformation at all. It's like they are sliding on sandpaper at the end, which makes me wince every time I see it.

The lack of sand deformation might seem like a small thing, but it was my first indication that this was not the evolution I had hoped for.

Another island, another set of women on vacation for two weeks. Only the most boring mini-games from the previous instalment make a return. Water slides and jet ski races are gone. Instead we've got flag races, butt battles, tug of war and that damn pool hopping game.

The volleyball is still around, but not much has changed except that I can't stop staring at the sand not moving. 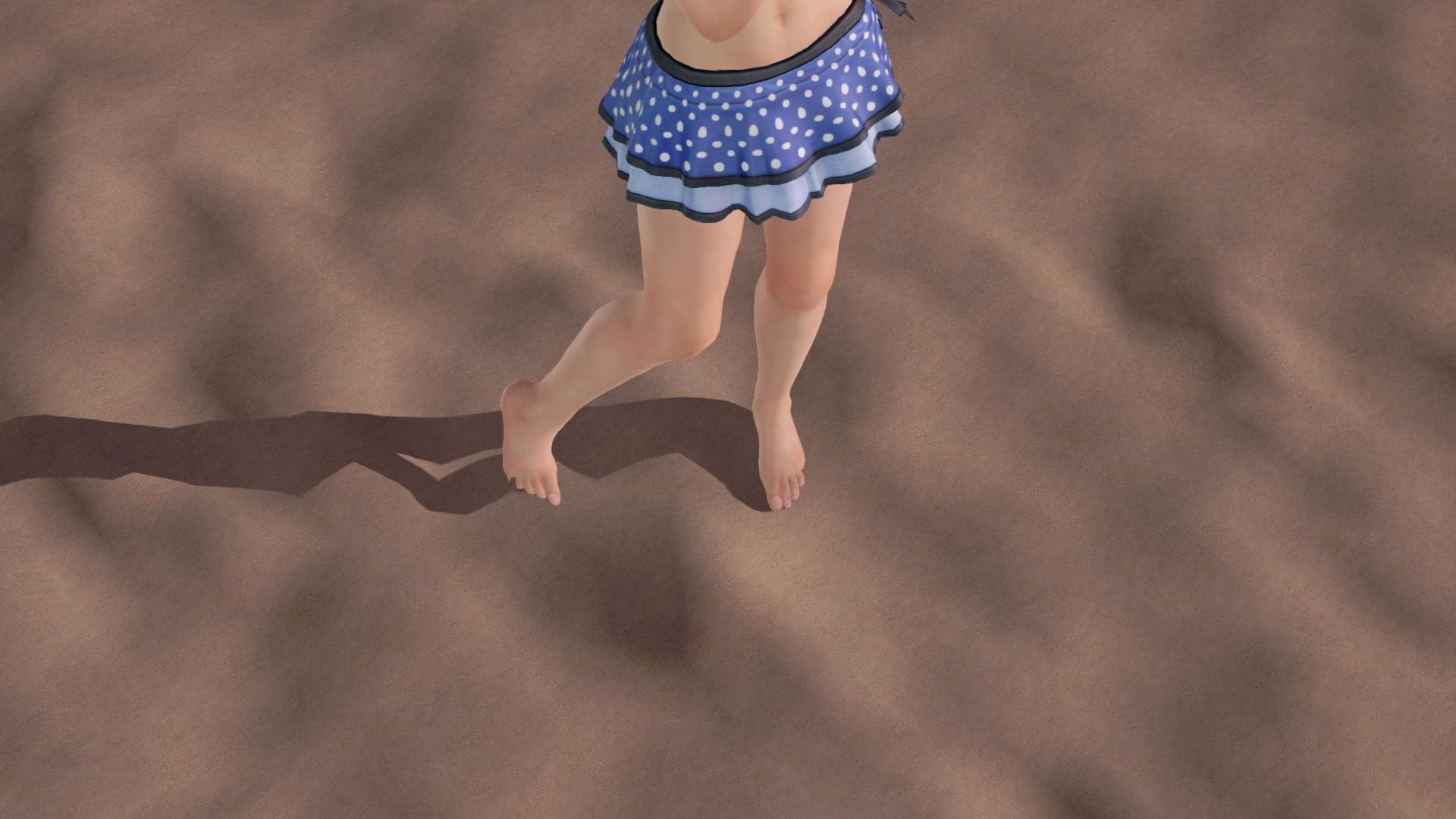 This shot of whichever character this is' feet is courtesy of the big addition to this instalment, Owner Mode. Owner Mode replaces directly controlling characters in mini-games with just sitting there watching the women do things while you snap photos and earn experience points. On one hand yeah, it's a little creepy. On the other, I don't have to randomly flail about in butt battle, wishing I could ride a water ski.

Stripping away the gift giving and mini-games and special Owner modes unlocked at later experience levels and we're left with what's really been the focus of the series since the first instalment — the women of Dead or Alive. 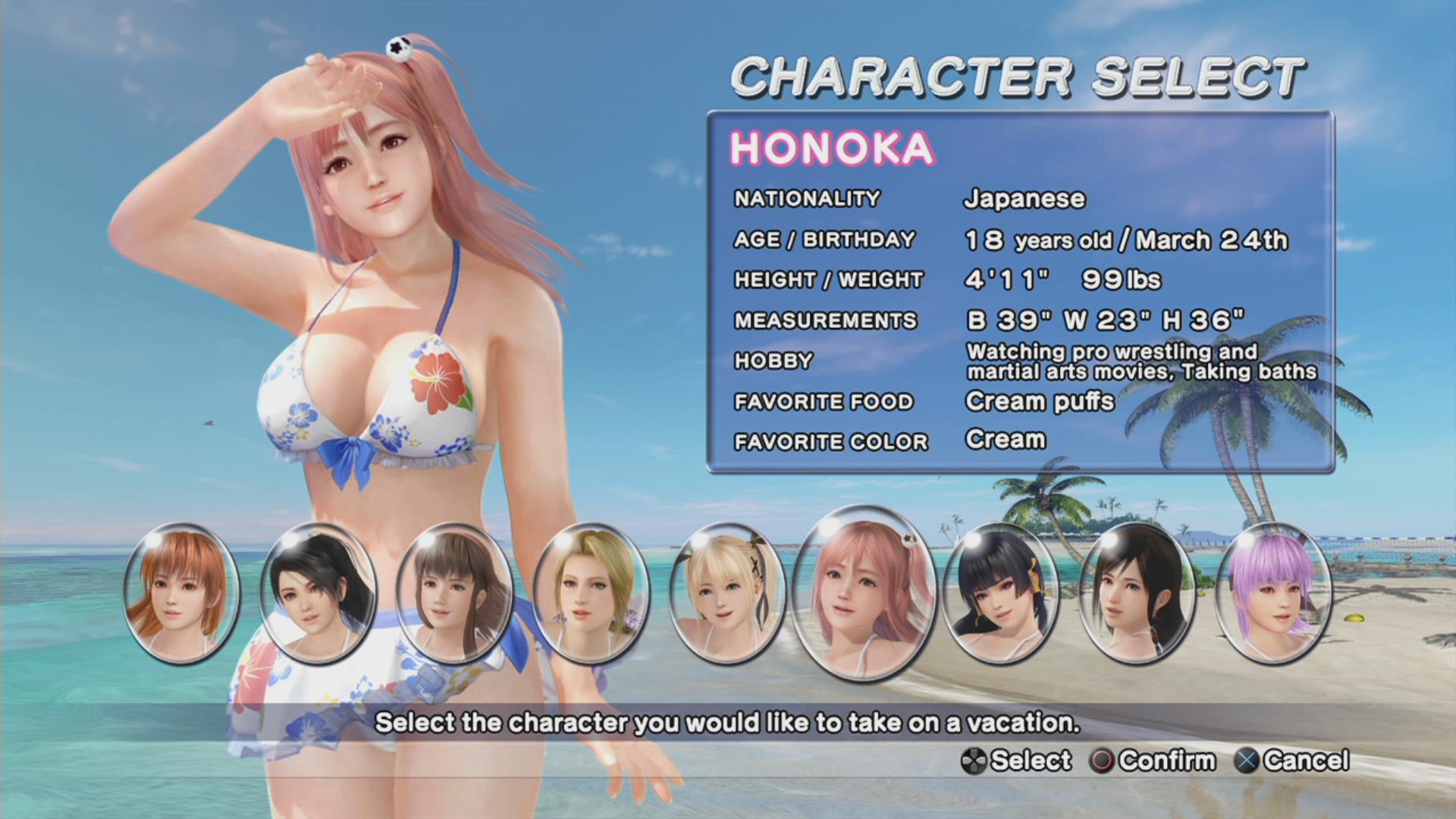 The nine characters included in the game, which were voted in based on a Japan-only background download popularity contest, look better than ever in the PlayStation 4 version of Xtreme 3. The Yawaraka Engine, designed to make skin look more realistic in Dead or Alive 5: Last Round, does an amazing job of rendering bodies. The bounce is back to being borderline realistic instead of insane, and they have even managed to make Helena Douglas' hair look like something that might actually happen.

What frustrates me is that Team Ninja has put all of this attention into rendering the female form, tan lines and all, but still can't make hair that doesn't fall through the geometry of whatever it happens to be resting on. 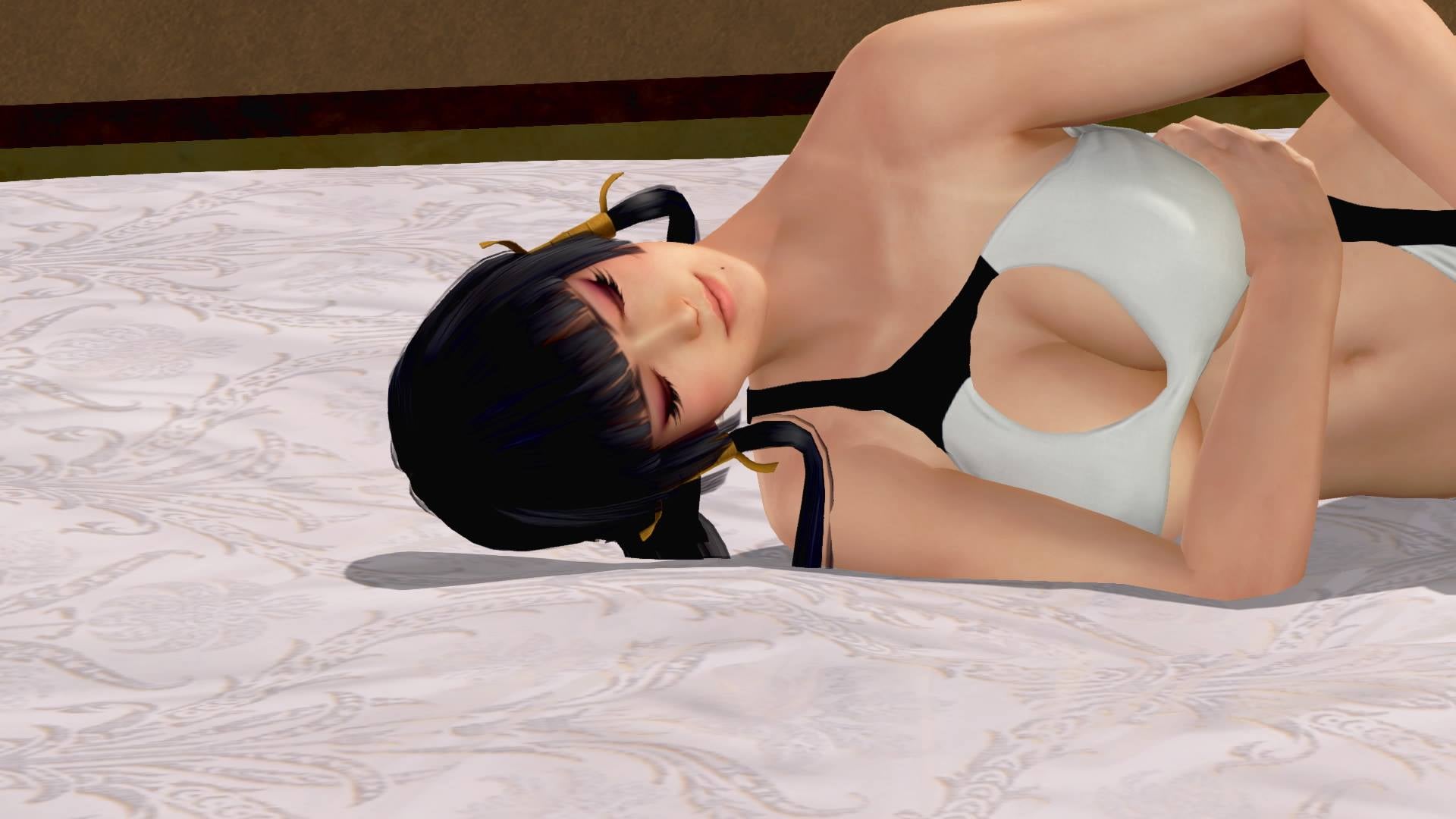 Bed head. Dead or Alive Xtreme Beach Volleyball was so charming because it felt like Team Ninja was actively trying to build an entertaining game to showcase its attractive character models. Xtreme 2 introduced a couple of neat new games to play.

I was going to say that Dead or Alive Xtreme 3 was the same game in a prettier package, but that's not quite right. It's a rehash that feels like it was put together with minimal effort. It's a massive step backwards. 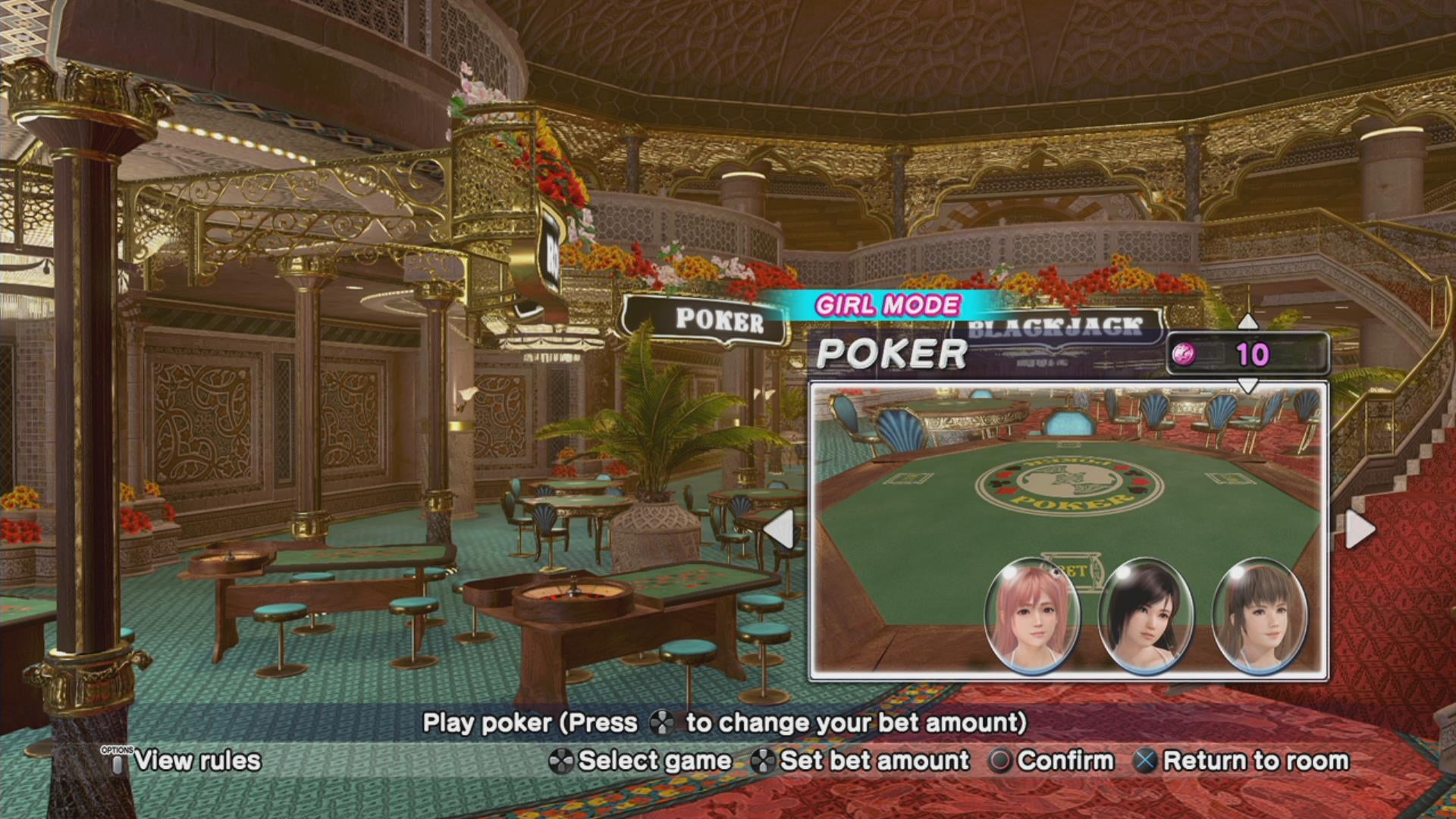 The casino has been robbed of its slot machines. The soundtrack has been stripped of its Reel Big Fish — there is no licensed music. Online multiplayer is gone. They have taken away most of my favourite things, offering nothing in return but more lifelike characters.

To top it all off, players who can't wait to earn money for swimsuits can purchase special tickets with real money to purchase items outright. 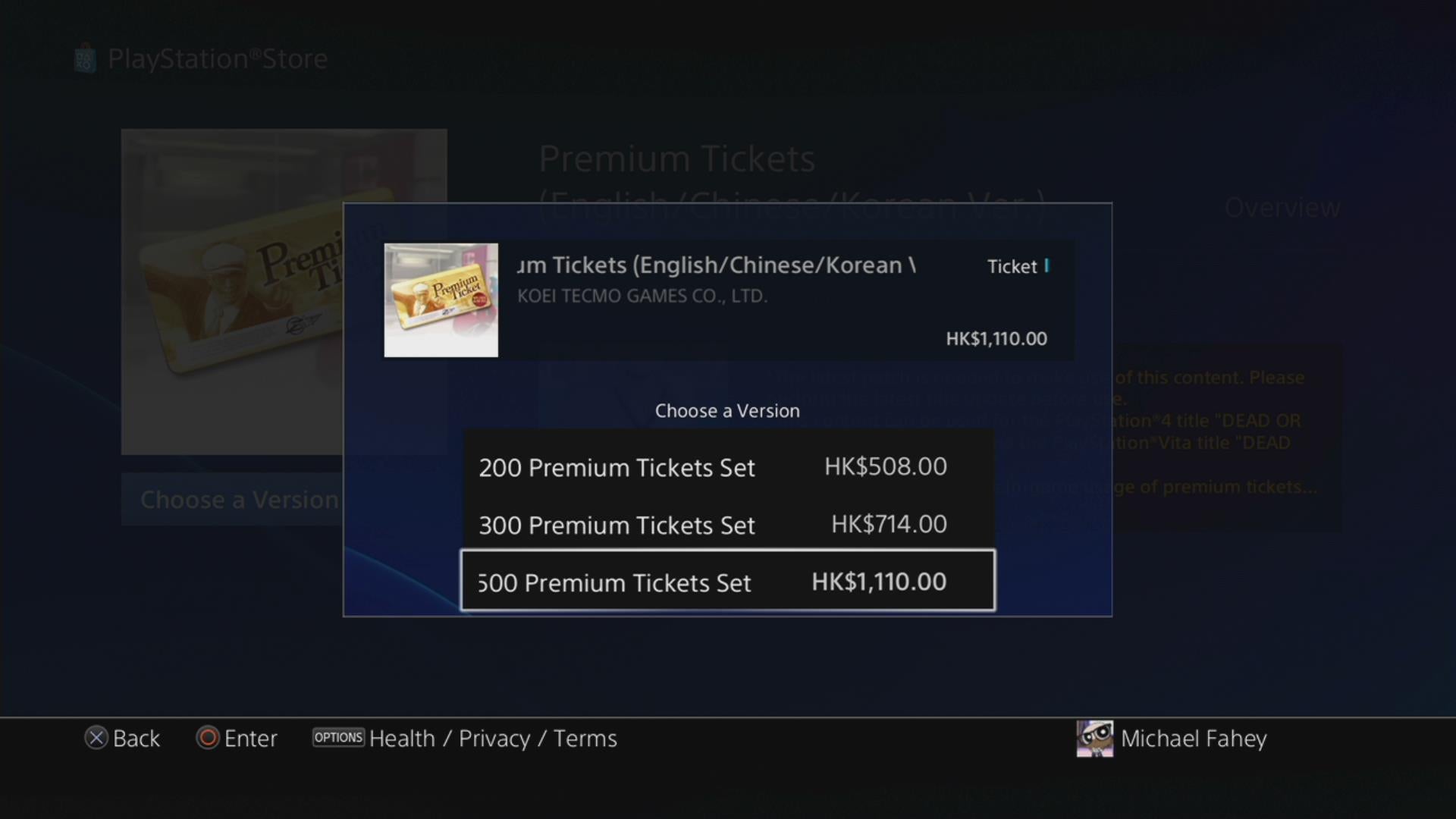 I don't even really mind microtransactions of this sort. It's just the thought of someone dropping cash to unlock swimsuits because they're too bored to play through the game gets me down.

If you only play the Dead or Alive Xtreme series to look at pretty characters in bikinis, that bit is still here, better than ever. Importing should be a breeze now that the initial explosion has died down. And if you've already purchased the game and aren't feeling it, just wait until PlayStation VR comes out. You could be in for a slightly squicky treat.

I like the characters well enough, but I've enjoyed the Xtreme series because of its seemingly fruitless struggle to be something slightly more than what it is. Team Ninja wasn't even trying here.

The disappointment I'm feeling brings me back to that Koei Tecmo statement regarding the decision to not bring the game to the West.

"We remain focused on delivering the best in fighting entertainment to our fans around the world," it says. Dead or Alive Xtreme 3 does not qualify for that statement.