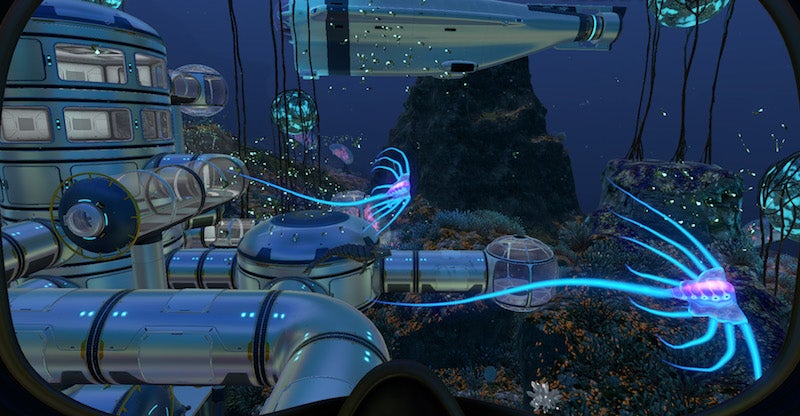 Underwater survival game Subnautica has a lot of things that can kill you. As has long been a point of contention among players, you can't do much to kill things back. This weekend, one of the game's developers revealed the reasoning behind Subnautica's lack of lethal weapons. As far as weapons go, players can kill smaller fish with their bare hands for food. There are a few defensive options against larger terrors of the deep, including a perimeter defence for your Seamoth and a stasis rifle that can briefly paralyse enemies, but your best bet is usually to retreat.

The absence of deadly weapons appears to be an ongoing debate both on Steam and on the game's forums. In September, Steam user Vasheeri asked this question yet again, wondering if the decision was lore-based or, failing that, to maintain the game's balance:

Is it lore baised [sic]? because for all I know something shot/emp'd your ship and thats why you crash in the first place. If the "company" or whatever your character works for does not approve of ruining the ecosystem of this beautiful planet then I say BALLS to that! your ship is making damn well sure to ruin the ecosystem by crashing into the planet, leaking radation [sic] (at least the repears like it) and exploding multiple times sending random crap into the vast sea, whats a few more fish corpses gonna do (no telling how much harm you are doing already with the simple act of removing a floater from a rock, that could of been another floating island in a few thousand years D: )

Soooo, anyone wanna explain to me why this is? (probably just a dev choice to prevent you from killing everything and to always make you fear the random bone shark) but if its a dev thing then i would like to know.

The thread had fizzled out in September, but it returned to life over the weekend. This time, however, Subnautica's game director Charlie Cleveland took to the forums to explain why Subnautica doesn't feature guns:

I haven't read all the comments here, but I'll chime in here, as I'm the main reason we don't have violent/weapons in the game.

Subnautica was being birthed right around the time of the Sandy Hook shooting. This was a particularly nasty shooting, although many people don't realise America has school shootings every day. Every. Single. Day.

Yet, for reasons I cannot understand, our people and the corporations that influence our country want to continue making it easy for people to get, carry and use pistols, semi-automatic and fully-automatic weapons.

I've never believed that video game violence creates more real-world violence. But I couldn't just sit by and "add more guns" to the world either.

So Subnautica is one vote towards a world with less guns. A reminder that there is another way forward. One where we use non-violent and more creative solutions to solve our problems. One where we are not at the top of the food chain.

The response has been met with both praise and criticism by users on the Steam thread, with people debating gun control, as well as Subnautica's lore and balance. While deciding not to add guns to a game is unlikely to have massive real-world ramifications, it's refreshing to see developers be intentional about their ubiquity in so many modern games. Whether video game violence leads to violent behaviour has long been a topic of debate, but Unknown Worlds has decided to eschew weapons in favour of exploring how people can live with — or, as is usually the case in Subnautica, in spite of — their environment.