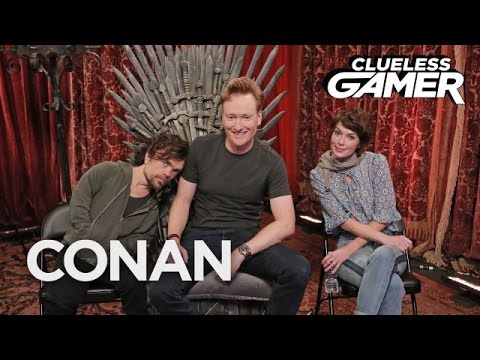 It’s been fun watching Conan O’Brien goof his way through various games with actors. But not every game is well suited for the Clueless Gamer stage — and some games simply are just terrible choices to put in the hands of the American comedian.

Doubt Blizzard will care, though.

The latest game to feature on Clueless Gamer is Overwatch, which makes a lot of sense given that it’s the biggest title of the week and arguably the month. But what’s even bigger is the names of the stars showing alongside O’Brien: Peter Dinklage and Lena Headey, best known for their roles on Game of Thrones.

It’s a huge headline moment for Overwatch because it puts Blizzard’s inaugural shooter in front of millions of people who would have never recognised the game from a bar of soap. But nobody gathered seems to really give a shit: Dinklage puts in about as much effort as he did for Destiny, Headey has no interest whatsoever and O’Brien takes more delight from pulling apart the Iron Throne.

Any publicity is good publicity, I suppose. I think it’d make more sense to re-use the original Overwatch trailer as a pre-roll ad in cinemas, but given how hard the Overwatch marketing train is rolling right now it probably doesn’t matter.