The Wild Theory That Connects All The Doom Games

On the surface, Doom seems like a clean break from the previous games, merely borrowing the same premise: you’re on the surface of Mars and fighting demons from Hell. But there’s evidence suggesting it’s more, and that id Software found a way to connect the series together. Maybe.

Let’s start by looking at the opening moments of the new Doom. It begins with a quote from… well, someone. It’s not clear who’s actually speaking.

They are rage, brutal, without mercy. But you. You will be worse. Rip and tear, until it is done.

Things kick off with a problem: you’ve been strapped down. But you’re not strapped to a table per se, it seems more like a coffin or… sarcophagus?

In previous Doom games, you played a marine assigned to Mars security detail for the Union Aerospace Corporation, the fictional megacorp that has messed with teleportation and other ways to contact Hell.

The situation becomes more mysterious as you try to leave the room:

People are praying in front of the box you emerged from, either as ritual, worship or fear. One of the game’s main antagonists, Olivia Pierce, suggests it might be the last. “We have to contain this,” she utters.

Around the corner, the player discovers the series’ familiar green armour, which appears to have been encased in a protective box. But how come?

Here’s where we start going down the rabbit hole.

Not much is explicitly said in the game itself, but if you pay attention to the text attached to collectibles, it starts filling in the gaps. The game explains that a UAC expedition into the Hell dimension found the green armour, dubbed the Praetor Suit, and the player’s character side-by-side.

In Latin, Praetor roughly translates to “one who goes before the others.”

One of the collectibles describes another age called “the first battle”, in which only “one” stood in opposition to them. This was you, the player, and the demons dubbed this relentless killer the Doom Slayer.

At the end of the original Doom game, the player fights their way to the spider mastermind, an upper tier demon behind the initial Hell invasion. But in a twist, it’s revealed everything has been for naught; Hell has already invaded Earth. That sets up the next game, Doom 2: Hell on Earth.

The new Doom says the player was “burned by the embers of Armageddon”. Given Armageddon is how we usually describe life-ending events on Earth, it sure seems like a reference to Doom 2. It goes on to say the Doom Slayer chooses to enter Hell and kill everything, which is basically what happens in Doom 2, as the player ventures into Hell.

The end of Doom 2 brings a hiccup into this theory, however. Here’s how the ending text reads, after you’ve defeated the massive Icon of Sin:

You’ve done it. The invasion is over. Earth is saved. Hell is a wreck. You wonder where bad folks will go when they die, now. Wiping the sweat from your forehead you begin the long trek back home. Rebuilding Earth ought to be a lot more fun than ruining it was.

That seems to suggest the character portrayed in Doom and Doom 2 has nothing to do with the Doom Slayer, but… well, ready to go deeper?

Years after its original release, Doom was ported to every new platform that game out, and that included the Nintendo 64. When Midway Games picked up the rights, though, it didn’t just convert Doom to Nintendo’s new hardware, it developed a new game that picks up after Doom 2.

In Doom 64, Earth has been reclaimed, but demons still linger on Mars. Earth’s government bombs Mars with radiation to knock them all out, and for a moment, it seems to have worked. But the radiation prevented the military’s sensors from tracking an entity with the power to resurrect the dead. The player is sent into Mars to save the world — again.

Key to continuing this theory, however, is the ending to Doom 64:

The blood pours from your eyes as you stand in defiance. As the only marine to endure the slaughter, you decide to remain in hell an ensure no demon ever rises again. The end.

The end? Maybe not. Though Doom 64 wasn’t developed by id Software, the new Doom makes references to all sorts of Doom lore, including an obscure comic book that became an internet meme. Anything is possible.

And here’s where the new Doom picks up, per a codex entry:

Burned by the embers of Armageddon, his soul blistered by the fires of Hell and tainted beyond ascension, he chose the path of perpetual torment. In his ravenous hatred he found no peace; and with boiling blood he scoured the Umbral Plains seeking vengeance against the dark lords who had wronged him. He wore the crown of the Night Sentinels, and those that tasted the bite of his sword named him… the Doom Slayer.

The game goes onto say that the Doom Slayer began systematically wiping out everything in Hell, becoming so notorious that “scribes carved his name deep in the tablets of Hell across eons, and each battle etched terror in the hearts of the demons”. The notion was that he would “come, as he always had, as he always will, to feast on the blood of the wicked”.

The Night Sentinels, a story element introduced later in the game, are a tough one to work out, and the game doesn’t give us clear answers here. 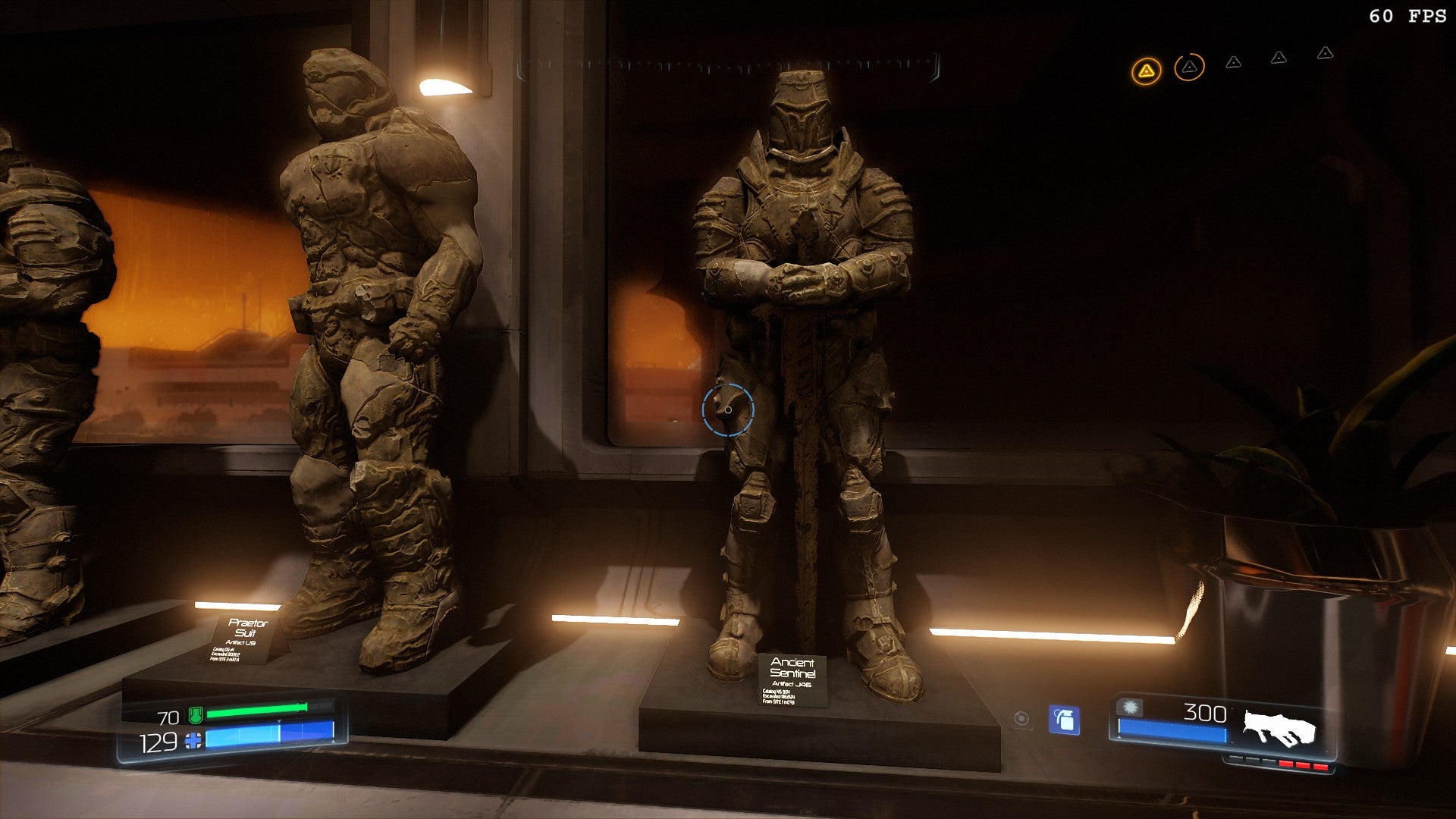 They were apparently a group of ancient protectors, part of another world, and one that ultimately gave the Hell dimension great power. The Night Sentinels, wearing a medieval-like armour, drew strength from a set of creatures called the Wraiths. A betrayal allowed Hell to tap into the Wraiths’ power, destroy the Night Sentinels and subjugate their world.

The Doom marine’s armour seems imbued with this same power, but it’s unclear why your armour would look so different — it seems from another age entirely. The game briefly touches on where this armour came from:

And in his terrible rancor between worlds and through time, the Hell Walker found the wretch who shall not be named, but in his heresy was loyal to the evil cause. The wretch downed the Doom Slayer in a mighty armour, wrought in the forges of Hell, impenetrable and unyielding.

But why does the armour look decidedly man-made? And how come the player is able to understand and respond to English, which presumably this ancient civilisation didn’t speak?

How’d you end up in a sarcophagus, then? As the Doom Slayer worked his way through every layer of Hell, a trap was eventually laid for them.

And blinded by his fervor, the lure drew him in. The priests brought down the temple upon the Doom Slayer, and in his defeat entombed him in the cursed sarcophagus. The mark of the Doom Slayer was burned upon his crypt, a warning to all of Hell that the terror within must never be freed. There he lies still, and ever more, in silent suffering.

And that, presumably, is where the new game picks up.

There’s a much simpler theory than all of this, of course. It posits that the Doom Slayer, who “wore the crown of the Night Sentinels”, is a soldier that fought the Hell dimension ages ago. A demon became a fan of their work, and helped augment their armour to be more effective against the legions of Hell. (It’s possible, but not clear, the Night Sentinels and Hell itself were technologically advanced. Thus, the new look. Anything symbolic from Earth or the UAC may simply be branding upon discovery.)

But let’s say the new Doom really does represent a continuation of what’s come before. What about Doom 3? Do we simply throw away the last Doom that id Software luminaries like programmer John Carmack worked on?

Maybe not! Doom 3‘s storyline involves the UAC finding relics of an ancient civilisation, one that had clearly encountered the Hell dimension by dabbling with teleportation. That civilisation was ultimately wiped out, though a lone “hero” managed to defeat them. The remnants of Mars relocated to nearby planets, including Earth, to try and start over. That could very easily be the events of another Doom-like event from the past.

It seems possible the Doom marine has been fighting this cyclical battle for ages. Whenever the Hell dimension rises, he’s called upon, which is why the demons chained him up and locked him away. This might explain why one of the new Doom‘s antagonists calls you “the only flesh and blood to walk between dimensions, between our world and theirs”.

It’s also possible I just wrote a thousand words of bullshit, and I’ve taken the canon of Doom far more seriously than anyone at id Software does.