People Searching For A Steam Summer Sale ARG Are Getting Desperate

For a little while, every major Steam Sale came with a meta game attached. Over the years, they grew more elaborate, culminating in last year’s Steam Summer Sale Monster Game. But then Steam Sales changed. Now there’s no meta game to be found.

Last year’s Steam Holiday Sale signalled the beginning of the end. Steam users uncovered what appeared to be an Alternate-Reality-Game-like series of clues, but the gingerbread crumb trail didn’t really go anywhere. In the end, Valve rewarded sleuths for their tireless efforts with a cheeky “Red Herring” badge. Because, you know, the whole thing was a red herring that only looked like what people actually wanted. In return, a band of Steam users sent Valve an actual fish, and I guess they all lived happily ever after?

Flash forward to now: The same band of ARG-hungry super sleuths have once again banded together at r/gamedetectives. They have high hopes that they will find something — anything — that looks, tastes or smells like a game, but so far… nothing. The board’s thread list is telling: 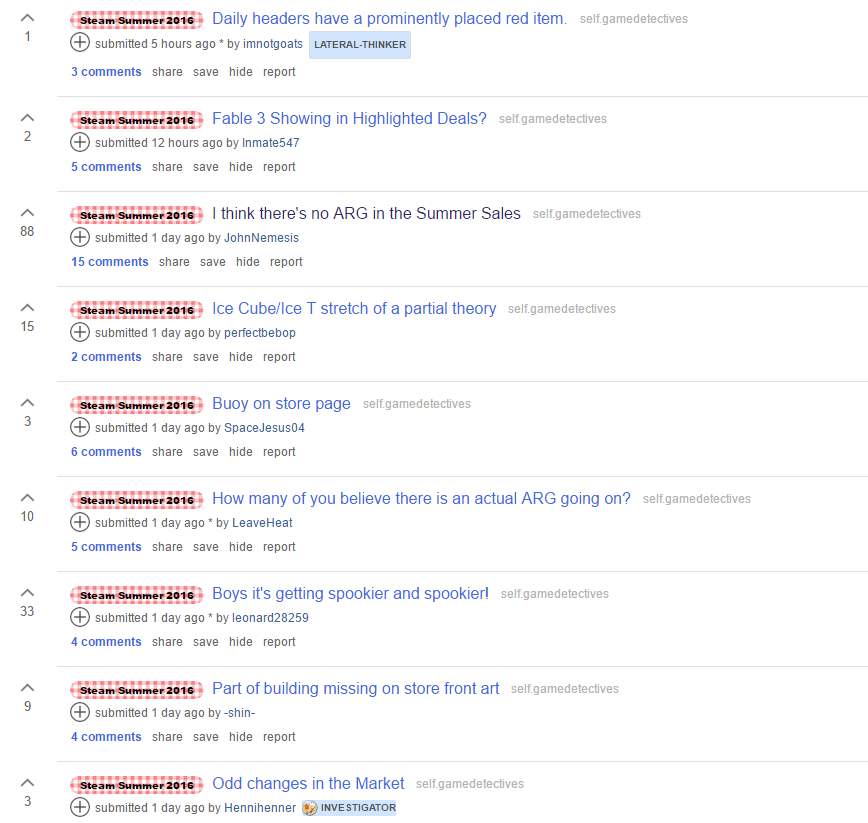 Basically, it’s a lot of people clutching at straws and few saying, “We’ve been at this for days, guys; it’s probably time to throw in the towel.” It’s equal parts depressing and impressive, given the elaborate theories some people have managed to assemble from, well, mostly nothing. They have been trying to deduce patterns in the sale’s front page imagery (which changes every day and has progressively revealed a darker edge than its happy cartoon characters suggest), trading cards and badges. Here are some highlights:

There’s also this one, which will go down in history as a piece of epic literature. I cannot tell if it’s a joke or not.

People have also pointed to commonalities between art on cards in this Steam Sale and previous ones (explanation: Valve is probably reusing assets) and weird code on some games’ pages (explanation: It’s Zalgo Text from user reviews). ARG lovers really want to play ball, but Valve’s just not interested.

It’s kind of a shame. People used to go nuts for the games that accompanied Steam Sales, going so far as to exploit holes in them by any means necessary. Mass acts of hivemind cooperation gave way to games that maybe didn’t end up the way Valve planned, but still provided people with a ton of time-limited fun. Ultimately, though, the goal was still to get people to buy video games, and Valve has, in recent times, made sales as no-frills as possible to achieve that goal. Daily deals and flash sales are also gone. Steam is a store and nothing more.

I’ve said it before and I’ll say it again: In some ways, that’s a good thing. Previous Steam Sale models were almost exploitative in their creation of black hole zeitgeists. They’d pull people in with LIMITED TIME OFFERS, convince people to spend, spend, spend because otherwise, they might never get another chance. Now everything is more direct, straightforward and honest.

The side effect, however, is that modern Steam Sales are kinda dull. A new meta game could spice things up, but Valve’s heart doesn’t really seem to be in games anymore. It’s kind of a bummer, but given how things have progressed over the past year, it’s not like we didn’t all see this coming.