What We Thought Of The New Zelda 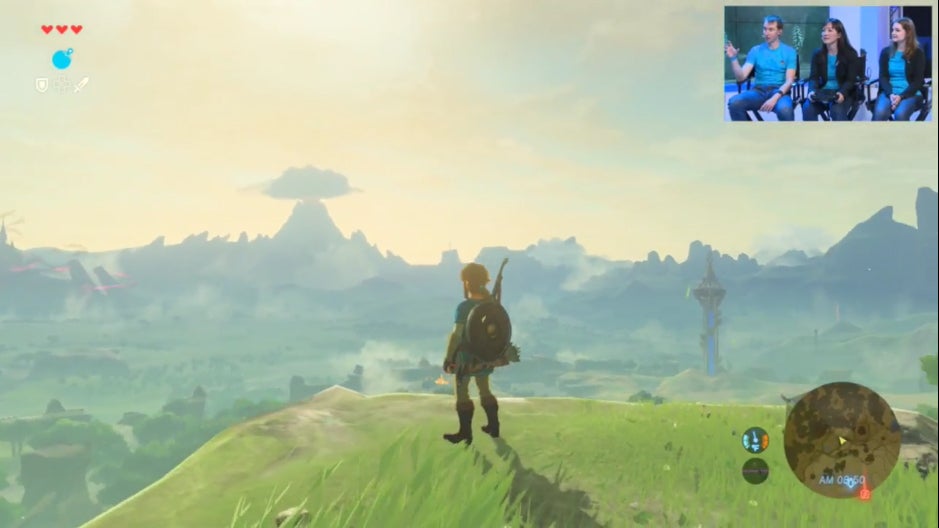 The Legend of Zelda: Breath Of The Wild was officially unveiled early this morning. I was awake for that reveal, as was Daniel Vuckovic, AKA Vooks of the Australian Nintendo site Vooks.

I thought I'd catch up with him and discuss what we just saw. Is this new trajectory right for Zelda?

Mark: So Vooks. We finally have a concrete look at the new Zelda and um... goddamn. I think it was a stellar unveiling, what are your thoughts? Vooks: Certainly, the trailer was perfect - I’m still annoyed that they interrupted it with 45 minutes of Pokemon and ruined the hype-train, but what we eventually got to see was amazing. You could see just how much has changed in the game the more they played it - they’ve thrown a lot of Zelda convention out of the window here. Mark: Haha! Yeah that was so strange. Being bombarded with Pokemon after getting all warmed up with Zelda. Typical Nintendo pacing.

And you're right — so much of what we now recognise as Zelda appears to be gone. I'm genuinely surprised by that. Aonuma always threatens to revolutionise Zelda — we're always given that line in the lead up to new Zelda reveals, but this time it appears as though Nintendo has genuinely followed through on that promise.

The thing that really hammered it home for me — bizarrely — was the existence of RPG stats. I honestly never imagined that Nintendo would add gear stats to a Zelda game. That really threw me. That was the moment where I took a step back and said, "shit, they really have changed Zelda"

Vooks: The thing that got me right away was the fact that Link can now jump. Link hasn’t jumped on button press since The Adventure of Link in 1987 and every 3D title he’s always had auto-jump when approaching the edge of a cliff. This is a huge change, even if it only seems small on the surface.

The RPG stats however, I really like! I think it adds another level of complexity to the series but without going perhaps as-depth as other RPGs might. Some weapons have more points than others, but also the enemies have hit points which you can see through the Sheikah Slate. It’ll come more into play in the open world where you’ll perhaps scan the base or hideout and see if you can take them down or you’ll have to walk around. But the real change for me (and it’s another small but big one) is that weapons are brittle and break. It’s lends itself to the survivor concept they have for the game. There’s no random heart pickups anymore! You have to eat food to heal yourself!

Mark: A couple of things really struck me.

First was the scale. It seems like Nintendo is really playing up on the scale of this new world. Not just in terms of its size, but the space. This game is full of gorgeous vistas and Nintendo seems intent on making us absolutely aware of this. They are saying: this game is big. Very big.

The other thing: this Zelda seems to have completely abandoned the traditional Zelda structure. Aonuma has said most items will be available in the early going, and it's also been said that players will be able to attempt different sections of the game almost instantly. The barrier to entry won't be items like, "oh shit, I don't have the hook shot". The barrier will be *difficulty*, or the fact that your gear simply isn't good enough to fight the enemies in that section. So far it's all sounding a little bit — gasp — Dark Souls.

Vooks: Bigger isn’t always better (that’s what she said). Twilight Princess was huge but completely boring and barren. The good thing is there seems to be something to collect, defeat or explore at every turn here or as you said - just take in the view.

This structure of doing the game in any order was seen before A Link Between Worlds, many will likely agree when I say that was the last truly great 2D Zelda title. Nintendo always seems to try these gameplay experiments in smaller titles, then roll them out in a bigger one later. This is clearly the way forward for the series, I just hope — but don’t think — it will affect the story in anyway. It didn’t in A Link Between Worlds, but it will force Nintendo tell a story in a new way.

Mark: I’m really excited about the new dynamic elements. The Far Cry 2-esque implementation of fire, the fact that weapons break, the always-changing weather mechanics — and how that has the ability to transform how combat works. It all points to a truly dramatic leap for the Zelda series. That’s so exciting.

I’m always curious to see how Nintendo adapts to modern trends in gaming. You saw how they reinvented the shooter with Splatoon. I’m excited to see their interpretation of modern RPG elements with this new Zelda game.

Does anything worry you?

Vooks: There’s a few things, I still want a good Zelda story — I mentioned before that the open ended nature of the game in A Link Between Worlds didn’t detract from a good story but here the game is much bigger. I still want to visit towns and see the Gorons and other races of Hyrule — see how they’re coping in this almost post-apocalyptic Hyrule. Nintendo made sure to mention they weren’t showing any story last night but it’s still there. Some open world games just get boring because you plow through the story in a couple hours if that’s all you do. I want side quests and trials, but I don’t want the main game to suffer because of the open world nature of the game.

The only other thing that worries me is that it’s a Wii U game. I just hope the older system isn’t holding it back from being entirely more awesome on the NX. We’ve already seen Nintendo remove most of the GamePad controls and systems from the game in this latest demo - can the NX version run a little smoother, look a little nicer? I hope so.

What did you think of the new revamped Zelda? Let us know in the comments below.

Cecilia D'Anastasio 18 Feb 2020 12:30 PM
"What Dungeons and Dragons class should I play?" is the kind of question you could answer with a cursory quiz, but that would be a mistake. You owe it to yourself - and to your D&D dungeon master - to think holistically about character class, maybe the most important choice you'll make in a D&D game.